The fabulously-rich dive sites in the protected area around the southeastern tip of the island of Misool and the award-winning Misool Eco Resort have become an ‘epi-central’ focus for liveaboards visiting West Papua. Site names like Nudi Rock, Boo Windows and Magic Mountain trip off the tongues of divers who’ve got Raja Ampat inked permanently at the top of their bucket lists. 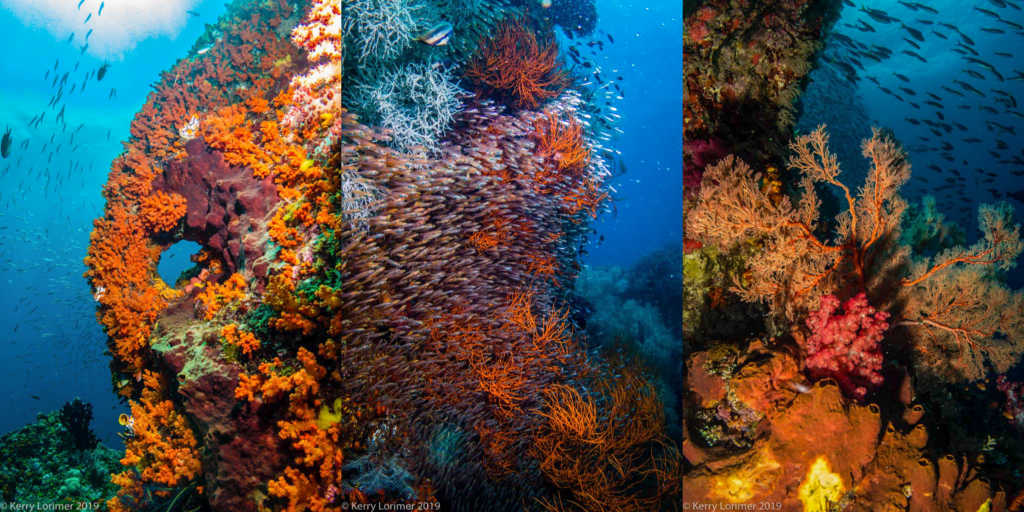 A dozen or so sites have become legendary among divers, and demand sees them feature on just about every liveaboard itinerary. Consequently, they’re starting to strain under all that love. 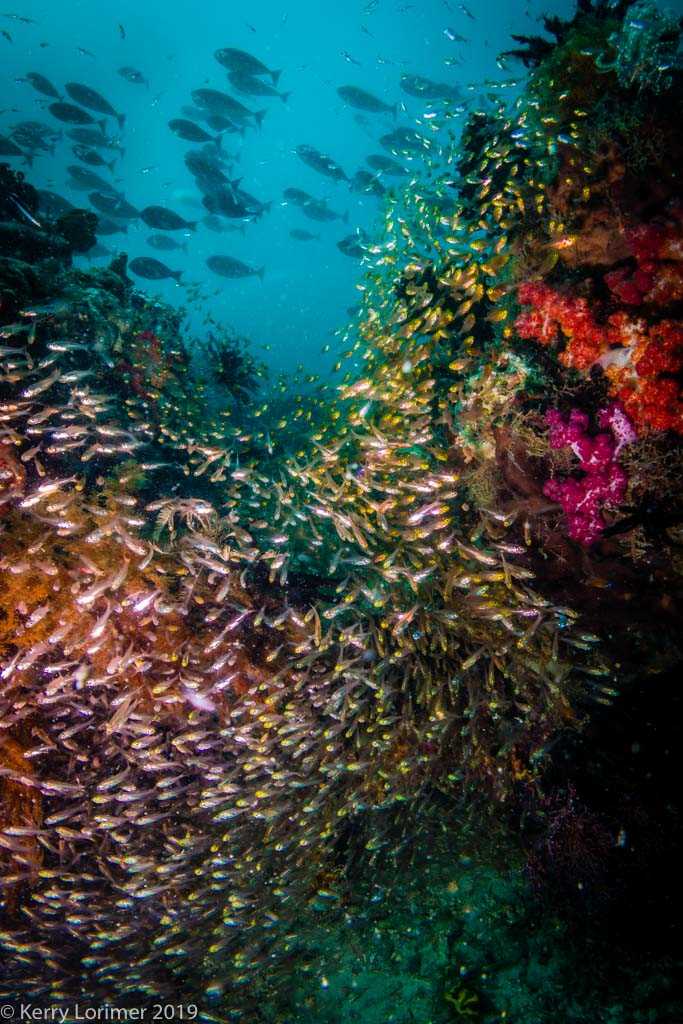 In fact, there are over 120 identified dive sites among the ‘Four Kings’ islands that make up Raja Ampat, the world epicentre of marine biodiversity. Recently, Conservation International (CI) and its conservation partners have been working on the northern side of Misool in the newly-declared North Misool Marine Protected Area, where the dive sites rarely rate a mention – much less see a diver. 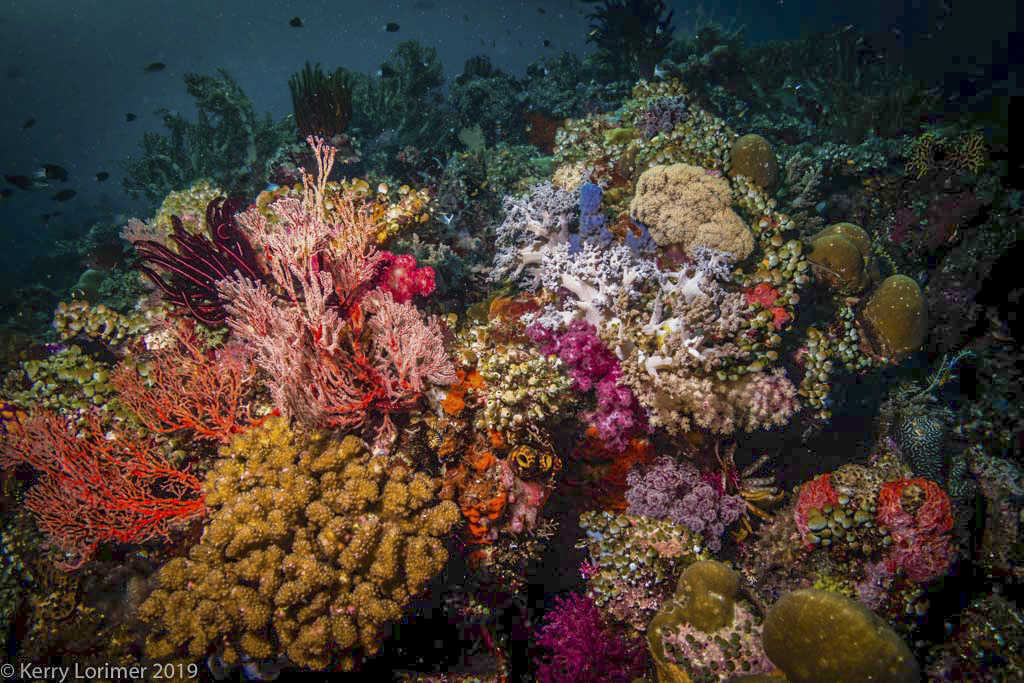 In August, 2019, Dr Mark Erdmann, Vice President of CI’s Asia-Pacific Marine Programs and a team of scientists and conservationists from the Raja Ampat MPA management authority, The Nature Conservancy, CI and the State University of Papua (UNIPA) completed a major biodiversity survey of the area, developing zoning recommendations that will inform a comprehensive management plan. The team found a surprising number of new and rare species and uncovered several exciting “muck” diving sites in the meantime. 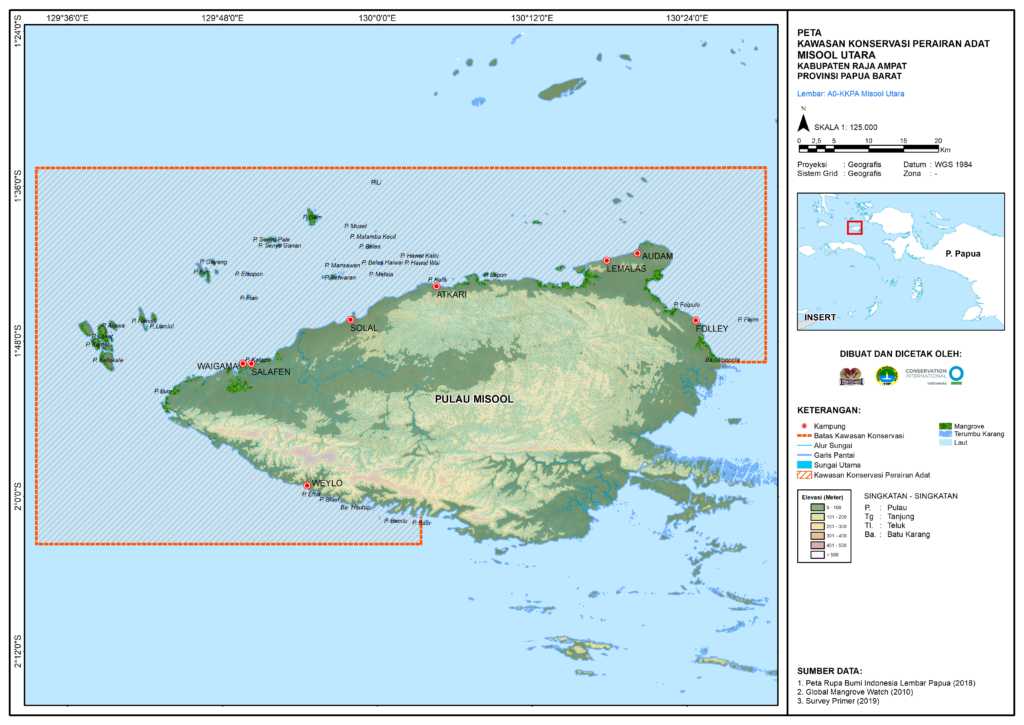 Map of the North Misool MPA, declared in February 2018. The MPA directly abuts the SE Misool MPA and covers a range of exciting habitats, from inshore reefs to “blue water mangroves” to extensive seagrass beds.

Earlier this year, the local communities, in collaboration with local NGO partner Yayasan Nazareth Papua – established a ranger station at the mouth of North Misool’s Kali Kasim River. In addition to an office facility and living quarters, a high-speed patrol boat and a longboat provide the means for effective surveillance. 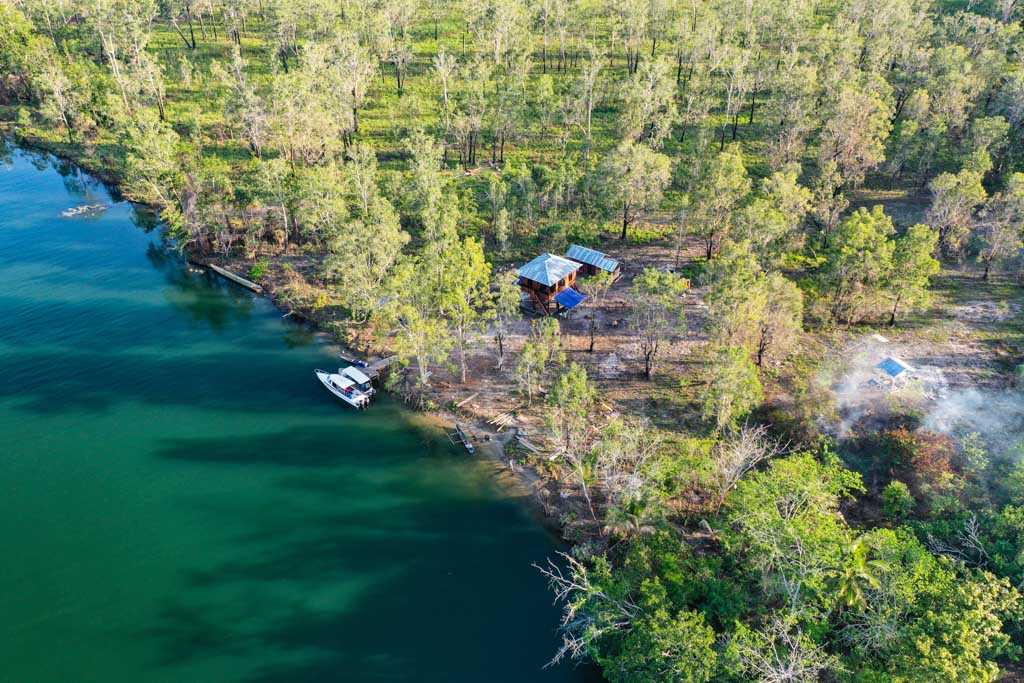 Three permanent staff are stationed on-site, monitoring and policing the surrounding waters and providing ranger training to help build a sense of ownership among the communities. The nine villages in the region have each committed to sending nine men at a time on two-week rotation to undertake training and ranger duties. The idea is that, over time, every adult male in the area will become a proficient marine ranger.

In early November, I travelled with Dr Erdmann to inspect the new station, follow-up on a few new fish species and retrieve data from the array of acoustic recorders collecting information on the manta rays that have now been shown conclusively to frequent sites all the way around Misool Island.

Sadly, few mantas were seen at the cleaning station the team previously confirmed on North Misool: on approach, we noted a suspicious-looking longboat speeding from the scene. Our fears were confirmed when we found dozens of dead reef fish floating on the water’s surface…

Illegal fish bombing (using home-made beer-bottle bombs to catch fish) is still a problem in the more remote areas of Raja Ampat such as North Misool, and one of the main incentives for establishing the ranger station. Thankfully, a dive confirmed the reef itself was undamaged and in excellent health. Impressively, we reported our finding to both the community rangers and the Raja Ampat MPA management authority, and two days later, the patrol team captured the bombers red-handed: they are now incarcerated and awaiting trial! 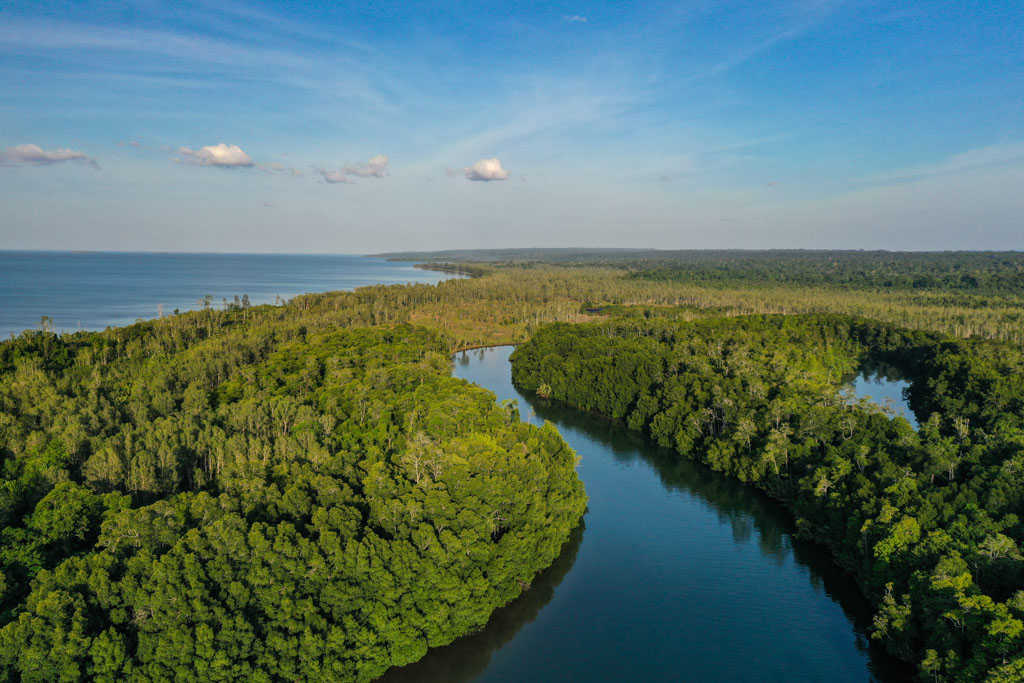 But it turns out that North Misool’s treasures don’t all lie beneath the water. Departing in a pink dawn, Umar Arfan – traditional leader and head of the patrol team – led us on a magical mystery expedition by longboat up the Kali Kasim River. He called out to his ancestors, announcing our presence, as thick rainforest crowded the riverbank, trailing branches and fronds in perfect mirror reflections on the dark water. Hornbills and cockatoos swooped and called overhead. 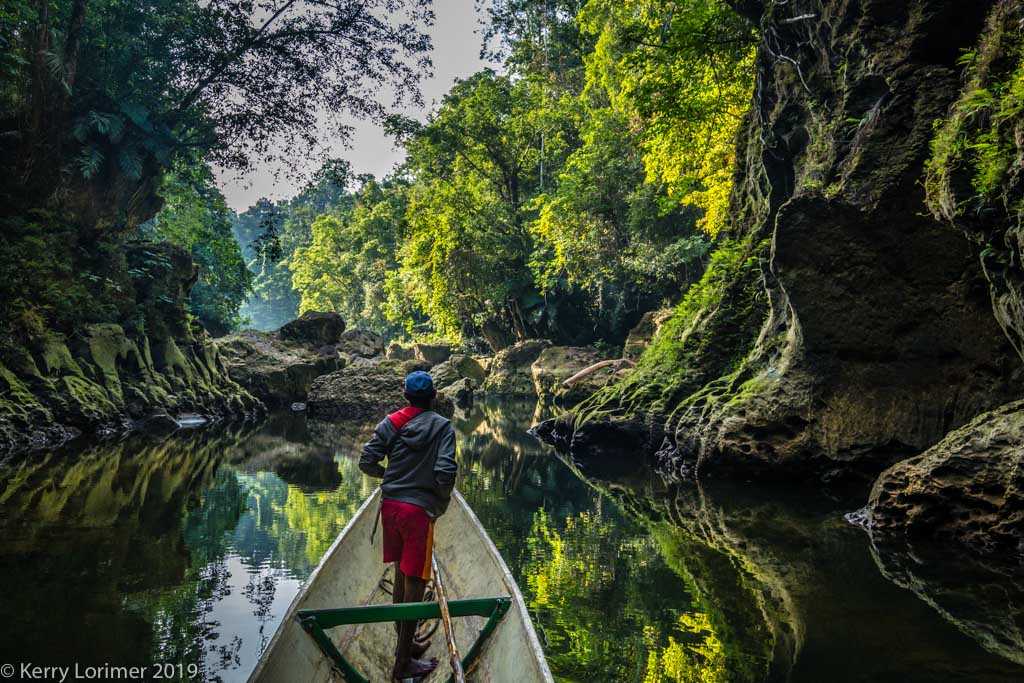 Perfect reflections are cast on the still waters of the Kali Kasim River.

A ranger stood in the bow, gripping a pole to fend off obstacles (and possibly saltwater crocodiles!). The river narrowed as it wound its way deeper into the island’s rugged interior, until it entered a jungle-bound canyon, with razor-sharp karst rock buttresses flanking the bank. 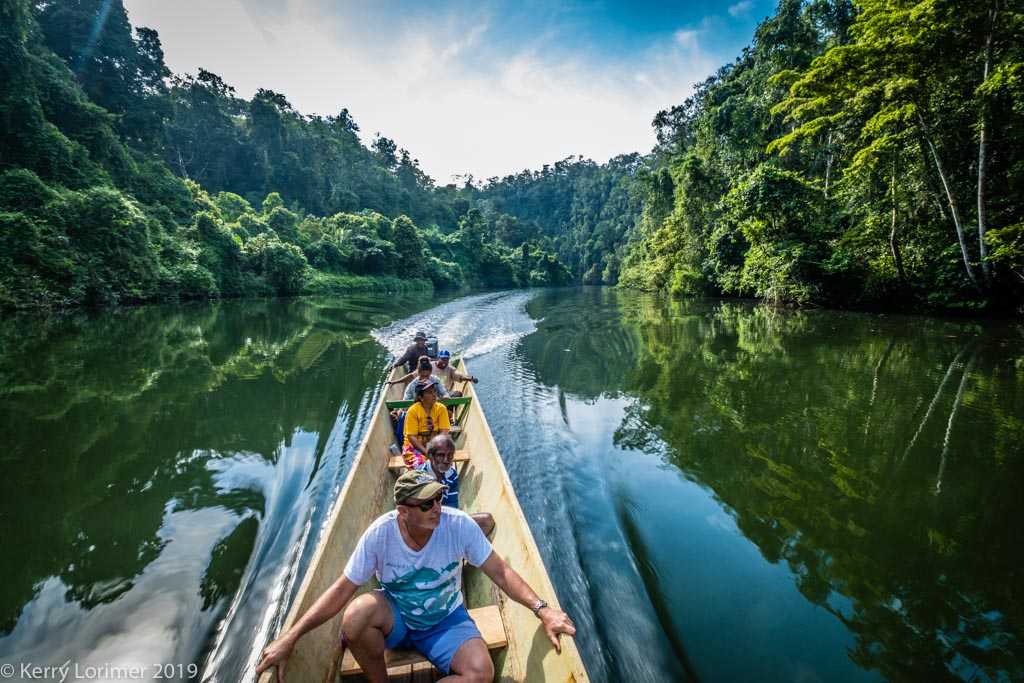 Mark Erdmann and staff from the North Misool ranger station on a dawn tour of the Kali Kasim River.

Eventually, a dam of massive boulders blocked further progress and, with the engine off, a chorus of birdsong was the only sound. 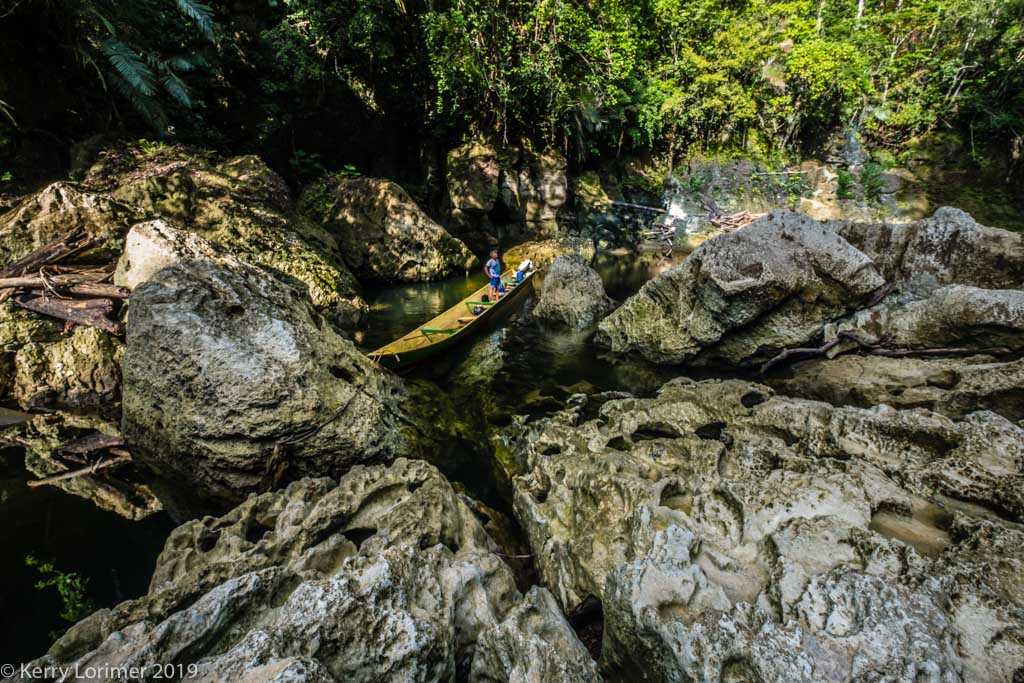 Eventually, our path was blocked by massive boulders that dwarfed the longboat.

The experience was all the more special for the realisation that few – if any – foreigners had ever seen this magical primeval wilderness. 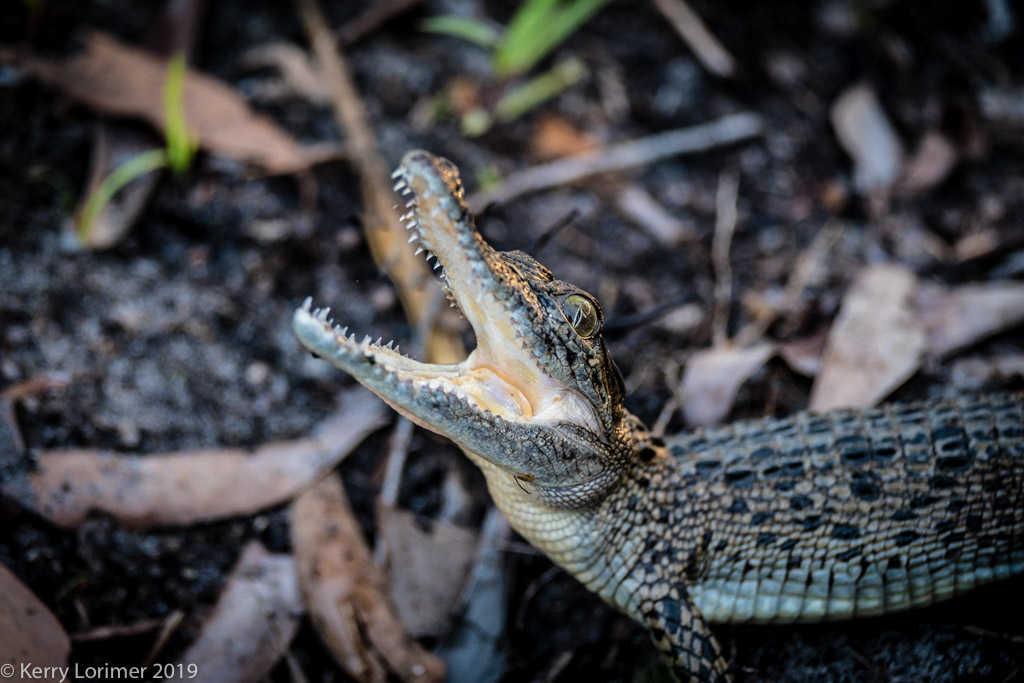 A baby salt water crocodile found near the North Misool ranger station and released into the river.

While the dive sites of North Misool are generally lower visibility and many feature muck diving (notable exceptions include the Nampale blue water mangroves and the Masmas Ulit seamount to the northwest), they offer an opportunity to escape the crowds – to ‘share the love’ among Raja Ampat’s reefs more equitably and sustainably – and for some rare adventure. There is still PLENTY of pioneer diving to be had in Raja Ampat for those willing to seek it!

Administrators note: Ask your cruise director to show you something new instead of going to the same popular (and at times, crowded) sites!

Kerry Lorimer is a free-lance writer and photographer, based in Australia. She’d like to thank Adebu and Demas (speedboat captains) and the CI Raja Ampat team for hosting her whirlwind tour of Misool!