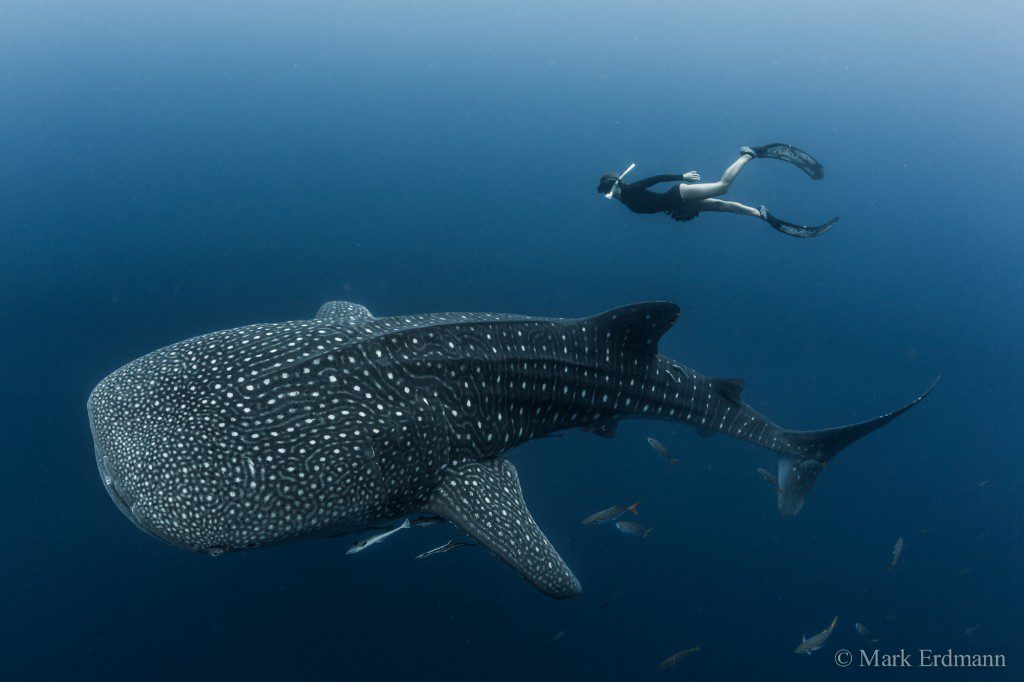 Although local communities in the Bird’s Head have observed whale sharks in their region for many generations, and early diving pioneers in Raja Ampat did regularly encounter them, the diving and scientific community have only really taken note of the rather unique whale shark populations in West Papua over the past decade. In early 2006, back-to-back expeditions led by Conservation International (CI) and WWF-Indonesia in Teluk Cendrawasih revealed that the “bagan” lift net fishers operating throughout the bay had daily whale shark encounters, and in fact would frequently hand feed the sharks every morning with a few buckets of “ikan puri” – the small silverside baitfish the bagans target each night. 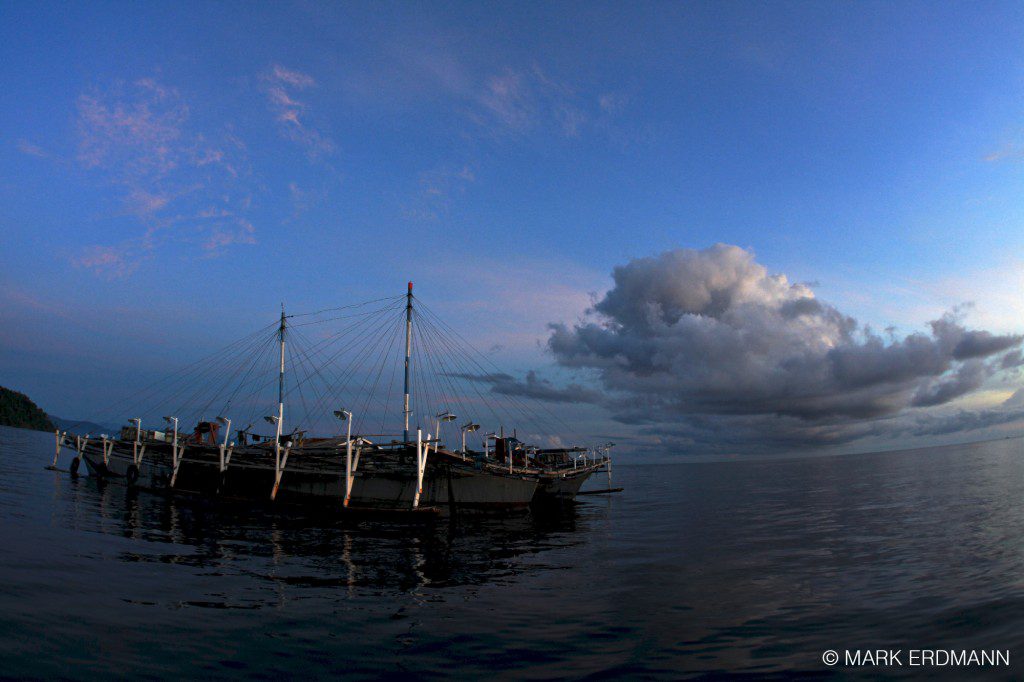 Some bagan fishers said they did this because the sharks represented ancestors and bring good luck; others more pragmatically explained that if the whale sharks congregate around their bagans in the morning, that they are more likely to also attract skipjack tuna, spanish mackerel and sailfish (which the fishers handline for). Either way, the daily ritual of 1-12 whale sharks gathering at individual bagans in the morning to feed creates a unique opportunity for marine tourism interactions with these giants, and whale shark tourism to Cendrawasih began to grow significantly from 2009 onwards. Not long thereafter, liveaboards operating in the Triton Bay region of Kaimana uncovered the same behaviour of whale sharks feeding at bagans in this region, though the presence of whale sharks there does not seem as consistent as Cendrawasih.

Importantly, and rather uniquely when compared to other known whale shark aggregations, the whale sharks (scientific name Rhincodon typus) of the Bird’s Head appear to be present year round. Whale sharks in most areas of the world where tourists interact with them (eg, Ningaloo, Isla Mujeras, Belize, Donsol, Galapagos, and others) are observed only seasonally and are believed to be highly migratory- moving from place to place to feed on an ephemeral food source like the eggs from annual mass fish and coral spawning or seasonally-abundant plankton blooms. 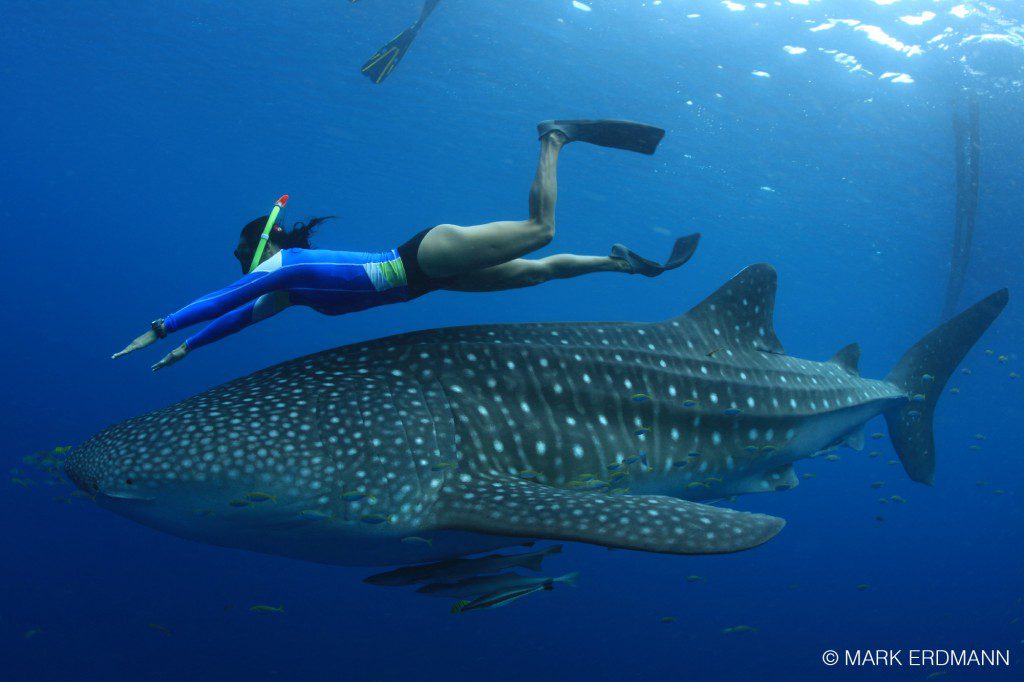 By comparison, whale sharks in the Bird’s Head have been recorded every month of the year, and with our growing photo ID database, we’ve been able to confirm certain individuals are nearly always present. Given the year-round abundance of ikan puri baitfish in coastal areas such as Cendrawasih and Triton Bays, this makes sense – why go on long migrations if you have a plentiful food source available all the time? 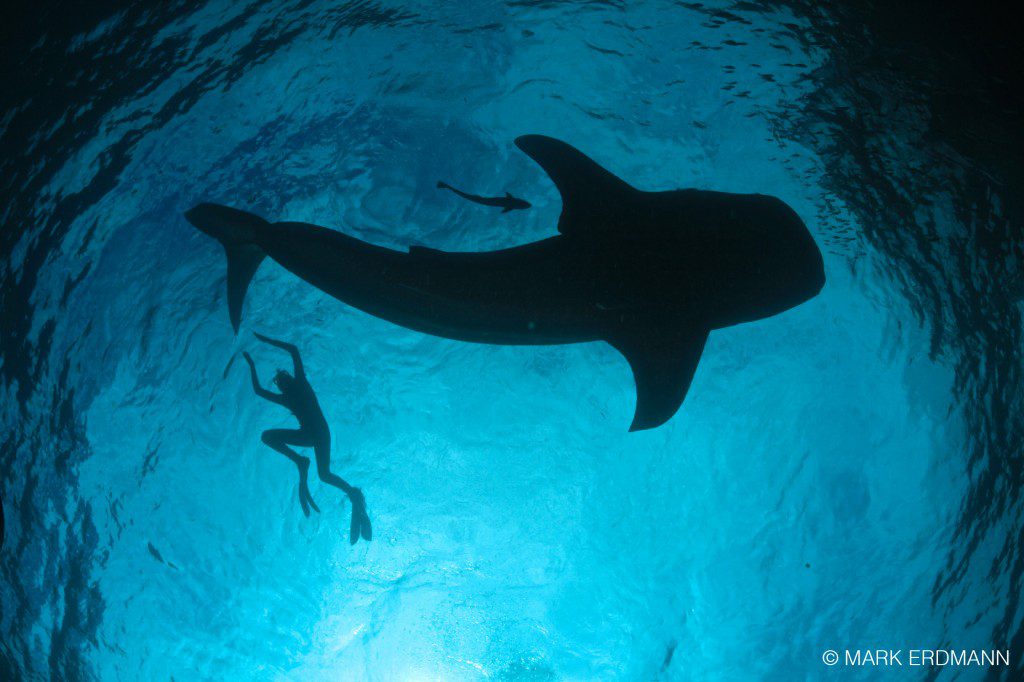 The World’s Largest Fish – and one of the least known!

This all highlights the rather startling fact that – despite being the world’s largest fish (believed to grow to 18m in length and weighing up to 21 tons!!) – the whale shark is also one of the least scientifically understood! For instance, nearly all of the known aggregations where tourists regularly interact with whale sharks (including the Bird’s Head) are comprised nearly exclusively of juvenile to young adult males in the 3-8m size range. Young whale sharks in the 60cm-2m size class are almost never seen, nor are females in general – and the large adults are only rarely encountered in certain areas like the Galapagos. We can only assume the females and young and adult males are spending their time at depth, though no one knows for sure! We moreover know almost nothing about their reproduction – though a large female caught in a net in Taiwan had approximately 300 fetuses in her uterus – hinting at even more surprises as we get to know this enigmatic species better.

In order to investigate the whale sharks of the Bird’s Head in more detail, a number of research initiatives have been launched to study these sharks. Since 2009, the Cendrawasih Bay National Park Authority (BBTNTC), WWF-Indonesia and Dr. Brent Stewart of Hubbs Sea World Research Institute (HSWRI) have been compiling a photo ID database of Cendrawasih Bay whale sharks, as well as RFID and satellite tagging several individuals. More recently, Conservation International (CI) has been working with the BBTNTC and Ministry of Marine Affairs and Fisheries to attach finmount satellite tags to Cendrawasih whale sharks, while also collaborating with Dr. Hawis Madduppa of the Bogor Agricultural Insitute (IPB) to examine genetic connectivity of whale sharks sampled in Cendrawasih and Triton Bays. CI has also been working with the Kaimana government and local dive operators including Triton Bay Divers to compile a photo ID database of Kaimana whale sharks, and has moreover done some limited satellite tagging in Triton Bay. Finmount tagging of Kaimana whale sharks is planned for May 2016! 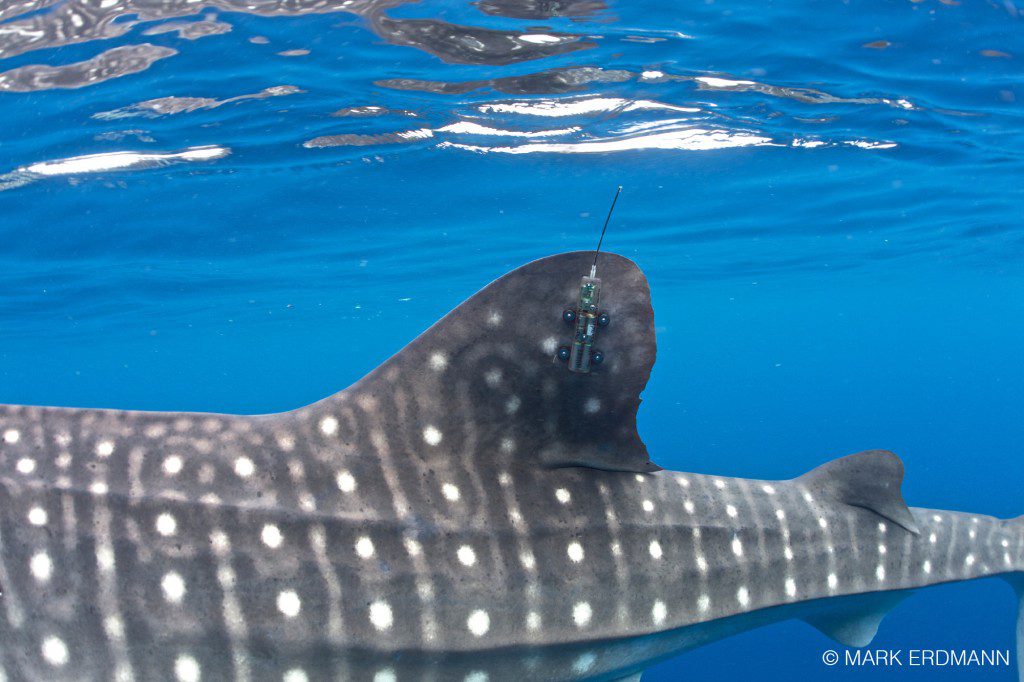 As this tagging and genetic research proceeds, we’ll certainly make sure the results are reported regularly to www.birdsheadseascape.com viewers, but in the meantime we’d like to enlist your help directly. The foundation of all whale shark research in the Bird’s Head is the photo ID database – which takes advantage of the fact that every whale shark has a unique pattern of spots and streaks (much like a human fingerprint) that allows us to identify individual whale sharks and track them over time. By compiling and continuously updating this photo ID database, we can get an estimate of total population size, better understand seasonal patterns of movement, and determine if there is any “connectivity” between the known populations in Cendrawasih and Triton Bays.

If you’re keen to help, please read the below section “How it Works” to learn how to take the best possible whale shark identification photos, and submit as many photo IDs as possible! You’ll note we are now launching the Bird’s Head Seascape Whale Shark Photo ID database with the known individuals from the Kaimana region, though we intend to soon add in individuals from Cendrawasih Bay as well. We encourage viewers to submit photo ID’s from ANYWHERE in the Bird’s Head – as we are particularly keen to investigate if there is movement of individuals around the Bird’s Head. To date, the vast majority of whale shark sightings in the Bird’s Head are in Cendrawasih and Triton Bays, but they are also rarely reported from Raja Ampat, and we also have reports from the northern Bird’s Head (off the leatherback turtle nesting beaches of Abun) and off the FakFak coast. Help us learn more about these fascinating animals by contributing to the photo ID database! 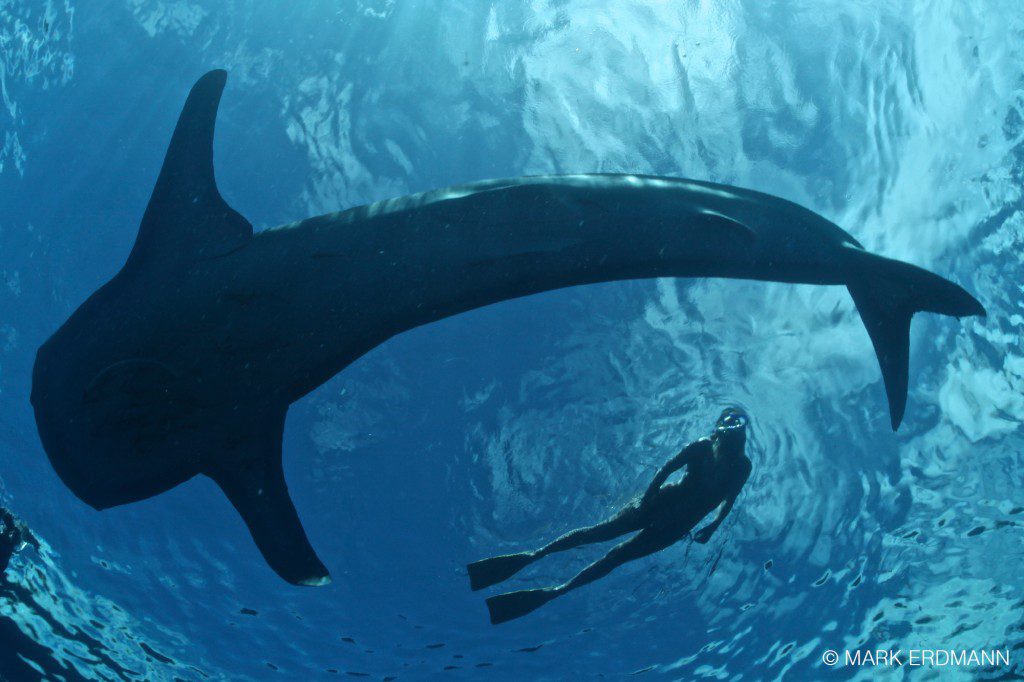 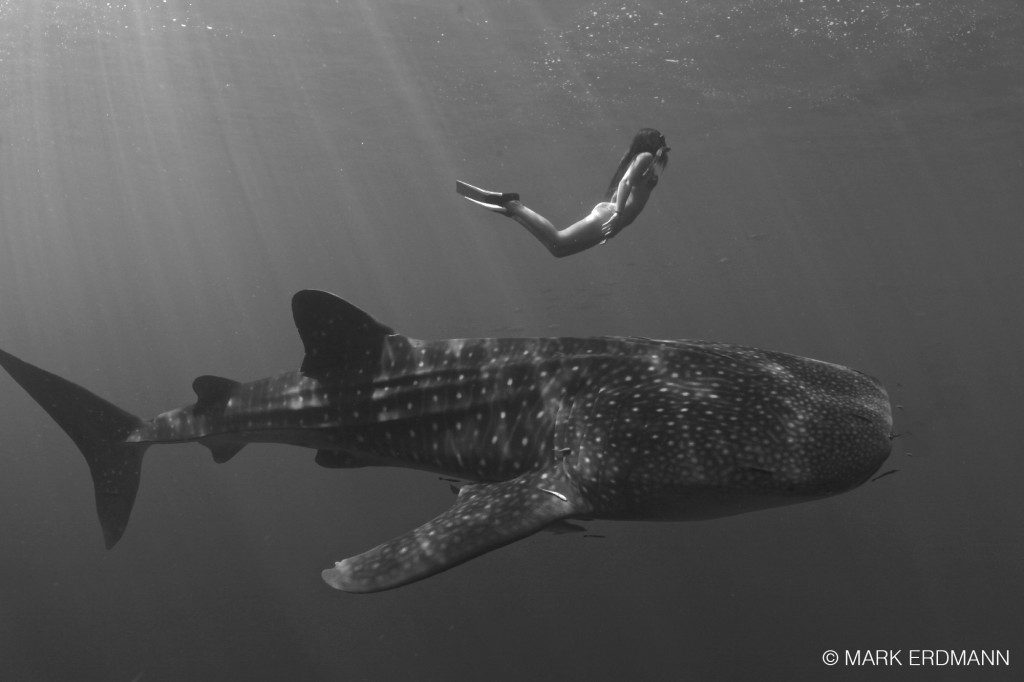