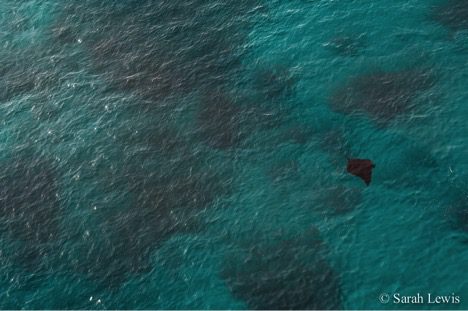 Though the Bird’s Head certainly has its fair share of charismatic megafauna, it is a generally accepted frustration (indeed, a “first world problem!”) that mantas and whale sharks aren’t found in the same place in West Papua. Raja Ampat has mantas to spare (both oceanic AND reef mantas), but whale sharks make only the tantalizingly rare appearance. Triton Bay is increasingly well-known for its whale sharks, but mantas have proven elusive. And Cenderawasih…..well, everyone knows Cenderawasih is synonymous with whale sharks, but mantas?? In a decade’s worth of exploration of this “Galapagos of the East”, we’ve only managed a tiny number of fleeting manta sightings.

As such, we were delighted to spot a number of mantas on our last trip in Cenderawasih on board the Australian expedition ship True North. Although not a manta focused trip we vigilantly kept our eyes and ears open for any sign of these gentle giants. Our first stop was Mapia, a very remote atoll seldom visited by tourists, and we were keen to use this rare opportunity to find out if mantas occur here. At any new site we seek local knowledge as an initial approach to find out more, with this in mind we made a quick visit to the Mapia military base where the friendly locals reported that they frequently see manta rays. Although we didn’t see any for ourselves this new information has left us eager to come back in the future for a manta focused survey. 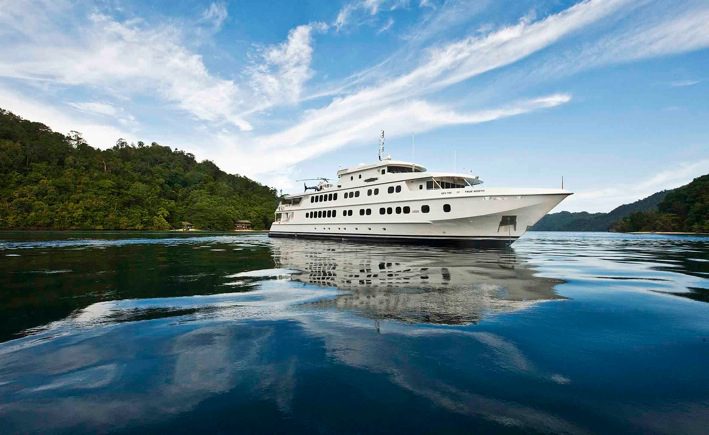 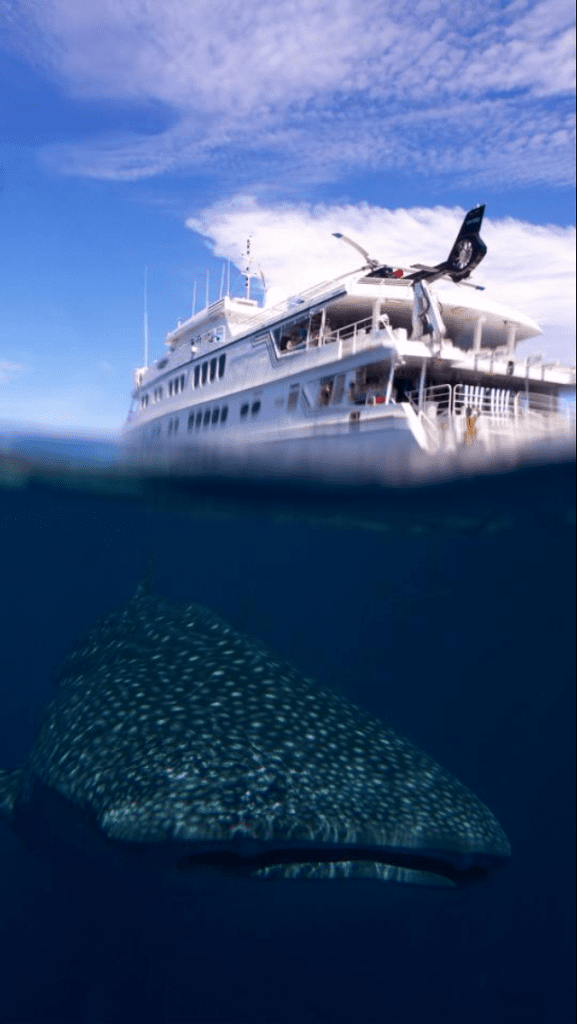 Further into the trip we reached the stunning Auri archipelago and it was here that we had our first manta ray sighting. About half a dozen surface feeding reef mantas were spotted from the air by True North’s helicopter. Unfortunately our tender full of snorkelers were unable to locate the feeding mantas, but later in the day we did get a close encounter as crew member, Glenn, nearly ran the tender into a large surface feeding reef manta. Luckily tragedy was avoided as Glenn cut the engine just in time and the startled manta ducked below the surface, showering the guests with water in the process. 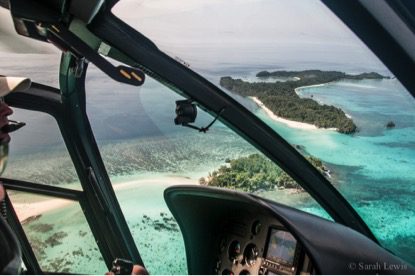 View of some of the stunning Auri Islands from the True North helicopter.

Our final manta encounter of the trip was brief but by far the most astounding. While giving a manta ray presentation to the guests onboard the ship, there was sudden excitement as someone spotted a manta leap clear out of the water just meters from our ship. We all ran to the window to witness this manta breach another two times right in front of us. What a coincidence that this show happened just as I was explaining how intelligent mantas are! It’s so exciting discovering manta rays in remote areas where they have never been documented before. Almost nothing is known about manta rays in Cenderawasih and these sightings are all important pieces to the puzzle.

Despite a number of manta encounters we are still yet to get a single photo ID of a Cenderawasih manta ray. Can you help us? We encourage anyone visiting the area to keep your eyes peeled for manta rays and please submit any photo IDs to the BHS manta database. You might even be the very first person to submit a Cenderawasih manta ID! 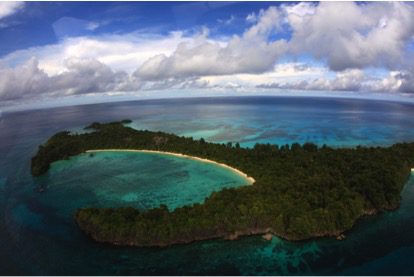 Of course, whale sharks also featured prominently in our visit to Cenderawasih. We were delighted to find that despite our visit being precariously close to the full moon, the sharks were still in abundance, and at least half of the bagan lift nets were still operating despite the bright moonlight conditions. We were also pleased to see a number of oceanic blacktip sharks and bull sharks deeper in the water column below the bagans. 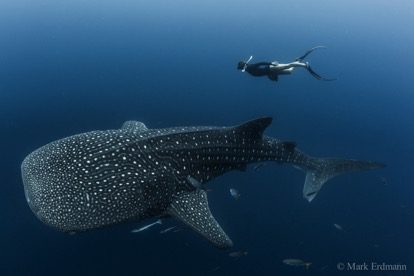 Sarah enjoying an early morning dip with a goliath… 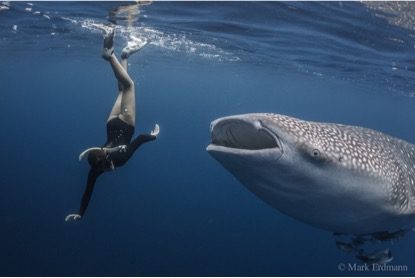 On this trip we were also fortunate to be able to deploy an additional 5 fin-mount satellite tags to five male whale sharks ranging in size from 3 to 6m. We previously reported upon this tagging program (being done in collaboration with the Cenderawasih National Park Authority and the Ministry of Marine Affairs and Fisheries) back in July 2015, Besides deploying 5 new tags, we also encountered several of the previously-tagged individuals from June, and were able to clean a few barnacles off their transmitters. 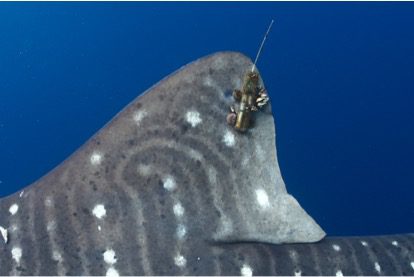 One of the fin-mount tags from June 2015, showing some barnacles and fouling growth. We encourage any visitors who see sharks with fouled tags to attempt to clean off barnacles, which can usually be easily pulled off by hand due to the “PropSpeed” silicone foul release coating on the tags.

Four of the five original tags are still transmitting on a near-daily basis, and all five of the newly-mounted tags are functioning perfectly, transmitting their positions every 1-3 days. The newly tagged individuals have, as expected, mostly stayed in the near vicinity of Kwatisore, though the largest animal made a brief detour north to Tanjung Mangguar before returning to Kwatisore. The five animals have spent most of their time in the 20-60m depth range, though several have dived to 96m in the past 3 weeks. 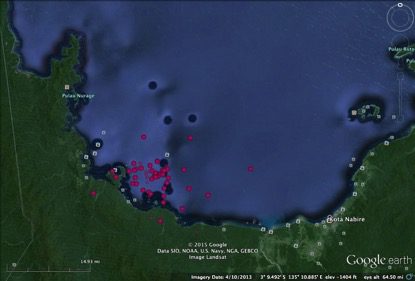 By comparison, the data from the sharks tagged in June 2015 shows a bit more “action”. While all of these sharks have also largely remained in the Kwatisore area, we’ve seen occasional forays northeastwards along the Nabire coastline towards Yapen, as well as to Teluk Umar (near Tanjung Mangguar) and even as far north as Pulau Yop near Wasior. Moreover, these sharks have been doing some deeper diving, with one shark hitting 672m, and all of them diving below 400m on a regular basis! With a predicted battery life of 2 years, we expect these tags will continue to reveal exciting information about the whale sharks’ behaviors that will be of use for conservation and tourism management. 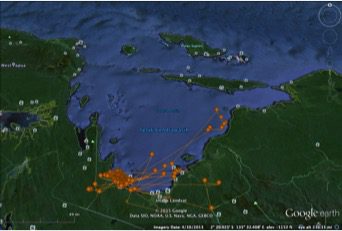 Position data from the 4.5m whale shark “Goris” tagged on 9 June 2015, showing movement along the northeast coast towards Yapen. NOTE: position marks on land are a result of occasional inaccuracies in satellite position fixes – not evidence of amphibious whale sharks!

Speaking of tagging, National Geographic recently completed production on a documentary that focuses on our satellite tagging work on mantas in Raja Ampat. Though the airing schedule for the documentary is not yet finalized, our colleagues at Alucia Productions (who initiated the filming) have recently published a short “teaser” video on their website: https://vimeo.com/143270114

Again – if any of you are fortunate enough to encounter mantas on your next trip to Cenderawasih, please do your best to get an “ID shot” of its belly and submit to the BHS manta photo ID database – we are VERY interested to know if there is any connectivity between the Cenderawasih mantas and the bigger population in Raja Ampat!

A special thanks to the management and guests of the True North for both hosting us on board and especially for generously sponsoring the whale shark tagging program in its entirety! We’d also like to thank OceanMax in New Zealand for their continued sponsorship of the tagging program through provisioning of “Propspeed” silicone foul release coating for the satellite tags.