About The Bird's Head Seascape

Welcome to the Bird’s Head Seascape, a mind-blowingly diverse repository for tropical marine life and rare and endemic birds, mammals, insects and plants.


The global epicentre of marine biodiversity, the BHS comprises more than 225,000 square kilometers (22.5 million hectares) in West Papua, Indonesia, including Cenderawasih Bay in the east, the Raja Ampat archipelago in the west, and the Kaimana Regency and Triton Bay in the south. Established as a multi-partner conservation initiative in 2004, the Bird’s Head Seascape initiative's aim is to secure the long-term effective management of the rich marine resources of the BHS in a manner that ensures food security and sustainable economic benefits for its citizens while also preserving its globally significant biodiversity. The centerpiece of the initiative is a network of 26 MPAs, protecting 5,229,782 hectares, spread across the seascape that can only be described as “scuba diving heaven”.

Contributors to this site have spent more than a decade exploring the most remote underwater regions of the Bird’s Head. With over 200 documented dive sites, we’ve found something to please just about everyone, but we strongly encourage all divers to continue our explorations. Through this site you can let us know what you find and post pictures of new dives and the interesting marine life you've observed and photographed in the BHS.

While this site is focused primarily on marine tourism, you’ll also find information on visiting the area’s topside attractions, getting to know its people, the exciting scientific research happening throughout the BHS, and recent posts from conservationists working to discover and conserve the BHS’s treasure trove of biodiversity.

We welcome your input and comments, and encourage everyone to share their recent experiences and latest images from the BHS on this site. Dive in! 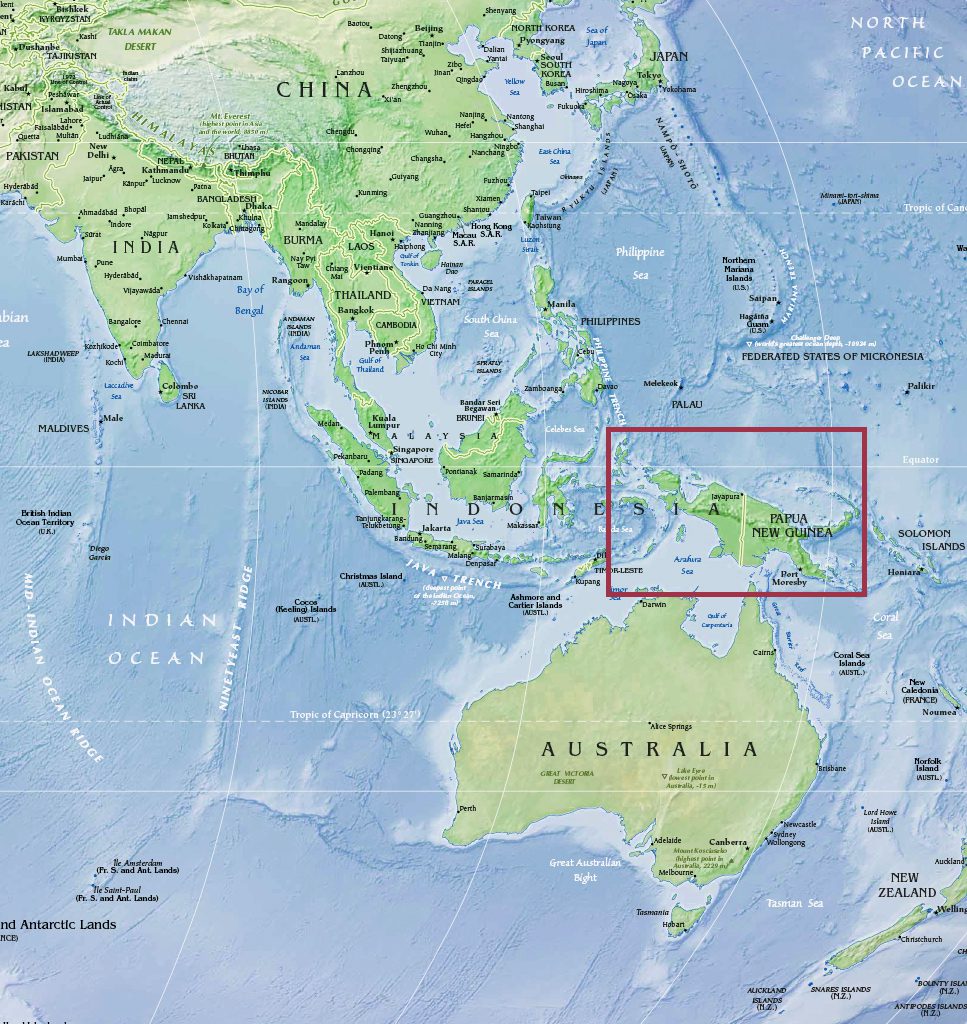 About The Bird’s Head Seascape 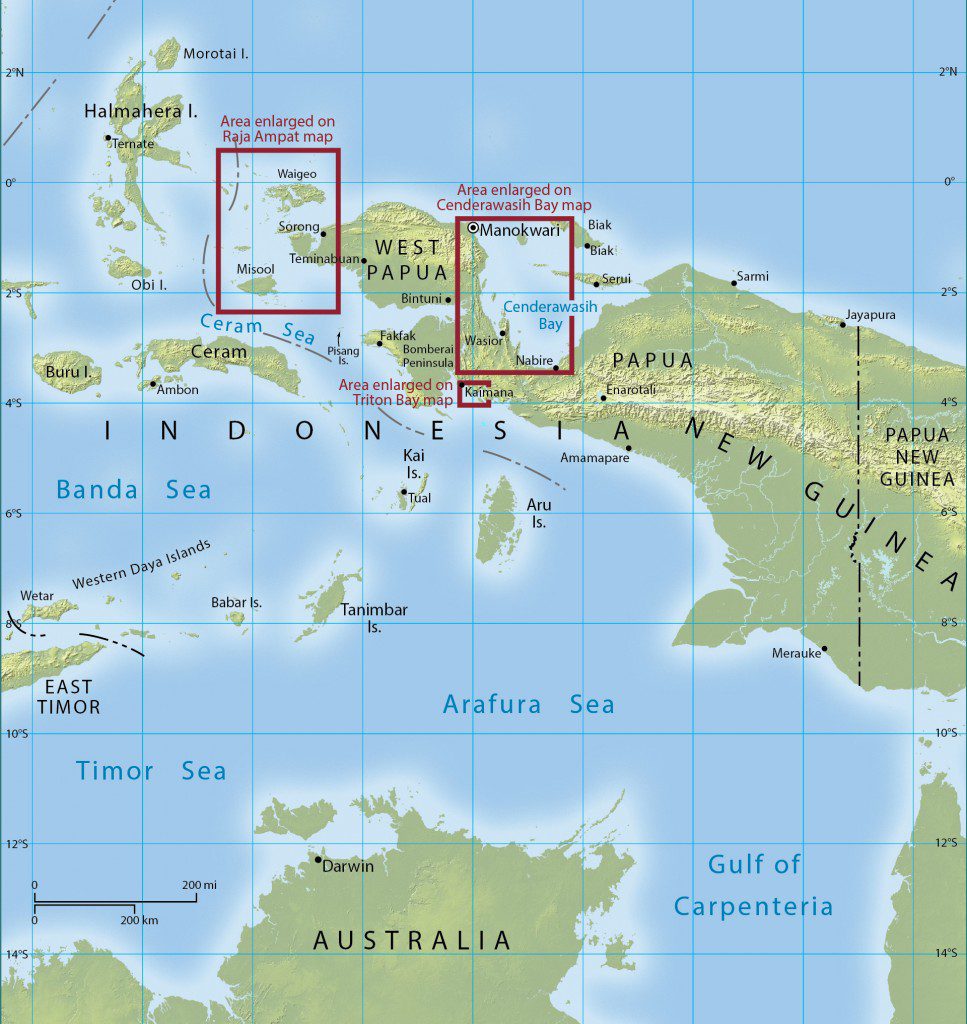 The Seascape Initiative
The Bird’s Head Seascape initiative was established in 2004. Dependent on the strong union of international NGOs and local, regency, provincial and national governments, coastal communities, local organizations, and universities, the initiative seeks to balance the needs of the Seascape’s human population while effectively protecting its rich natural resources. The Bird’s Head’s original network of 12 multiple-use marine protected areas (MPAs) formed the core of this initiative. The BHS exemplifies the priorities of the six-nation Coral Triangle Initiative, and is being promoted as a national model for Indonesia’s future marine resource management.

People of the BHS
The first humans to populate Papua crossed the shallow Arafura Sea from Australia about 5,000 years ago. Little is known about Papua’s contact with the outside world prior to the 15th century, when trade routes were established between Papua and the multiplying networks of spice-rich Sultanates to the west. The region quickly became a crossroads for traders who had traveled east on monsoon winds to exchange metal tools and cloth for Papuan products like Bird of Paradise feathers and massoy bark, which was used in many traditional medicines of the day.

By the early 16th century the burgeoning spice trade encompassed all the islands between the Moluccas and New Guinea. The Portuguese spearheaded the influx of European spice traders, followed closely by the Spanish, Dutch and British. Through their treaty with the Sultan of Tidore, the Dutch finally asserted their sovereignty over Papua at the end of the 17th century. Dutch rule over Papua continued during World War II when the north coast, especially Manokwari, became a focal point of battles between the Allies and the Japanese. General MacArthur built a major base on Biak, just at the outer edge of Cenderawsih Bay. Additional remnants of WWII can be seen at several abandoned airstrips along Papua’s north coast and the nearby submerged wrecks, which attract scuba divers.

After the war, most of what is modern Indonesia gained independence from the Dutch, but colonial authorities did not relinquish their control over Papua until 1962. For the next 30 years immigrants from the rest of the Indonesian archipelago sought business opportunities in Papua, but few ventured into the Seascape’s more isolated coastal areas. Today, however, potential employment in the petroleum, mining, logging, and tourism industries has attracted workers to the Bird’s Head from Indonesia and around the world.

Naturalist and Scientific Surveys in the BHS
Since the early 19th century, naturalists have visited areas of the Seascape. The French zoologists Quoy and Gaimard collected the first marine fishes described from the region, and identified such ubiquitous species as the blacktip reef shark, big-eye trevally, bluefin trevally, semi-circular angelfish, and the circumtropical sergeant major while in Raja Ampat. During the 1860s, Dutch ichthyologist Peter Bleeker added over 100 species to the Seascape’s fish count. During the same period, British naturalist Alfred Russel Wallace journeyed by sailing canoe around Raja Ampat’s Waigeo Island in search of birds of paradise and endemic insects, and wrote about the area’s singular beauty.
Modern surveys began in 2001 with the rapid assessment survey of Raja Ampat’s reefs conducted by the Indonesian Institute of Sciences (LIPI) and Conservation International, led by Dr. Gerald Allen. Since that first survey, more than a decade’s worth of surveys and studies have confirmed the BHS’s superlative biodiversity, and stressed balancing the needs of the environment with the needs of the people who live in the BHS.