The Whale Listener of Raja Ampat by Susan Hutchings

The whale listener of Raja Ampat 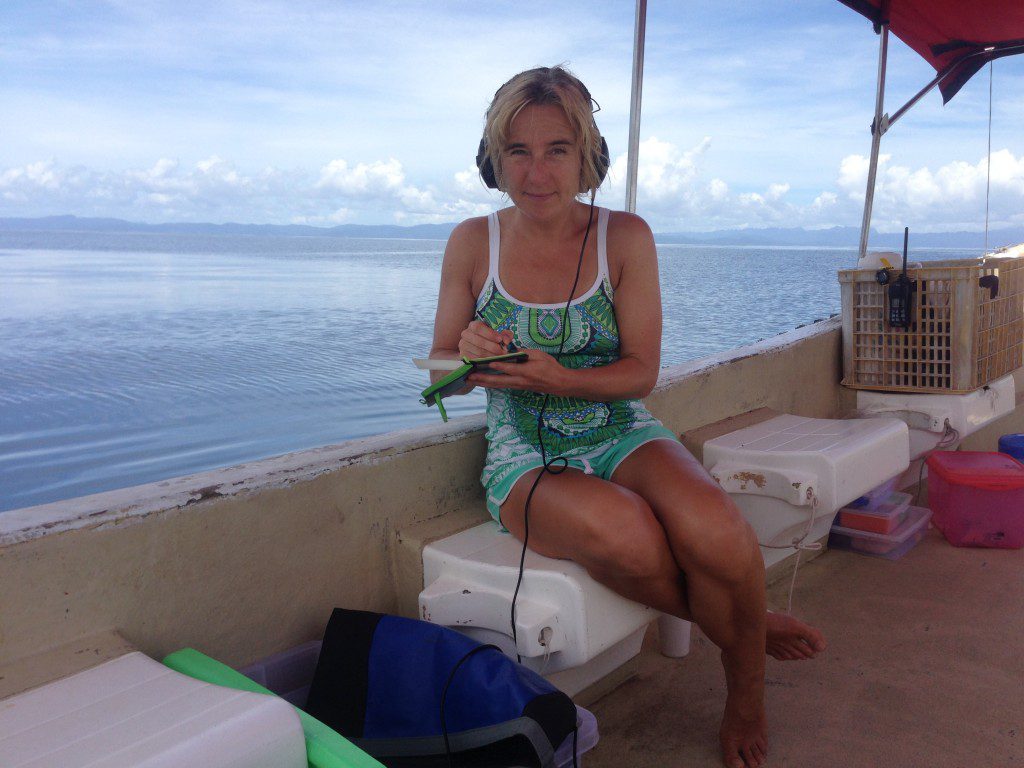 ‘Curiosity brought me to Raja Ampat. I heard that orcas had been seen in the region and, as I had been studying these enigmatic animals for nearly twenty years in the icy waters of Norway, I was eager to see orcas in equatorial waters. I also wanted to know if there were other whales in the area’ says Heike Vester, a social biologist and whale researcher working from Papua Paradise Eco Resort (PPER) on Pulau Birie.

Heike is based in northern Norway where she specialises in researching the vocal communication and repertoires of marine mammals. ‘When you hear their sounds you know that you are listening to another highly intelligent being, using complex communication’ she explains. Heike uses a hydrophone to make sound recordings, and maps the communication patterns and even the different dialects of each species she studies. ‘Initially I studied orcas who live in matrifocal [female-headed] groups; each group has their own language but they are able to communicate between groups. It’s fascinating. After the recordings I create a photo identification system so we can track movements of pods and individuals’. It was thought that orcas migrated with the herrings, following their food source, but we found that actually orca were present in the local fjords all year round, along with several other species of whales.. 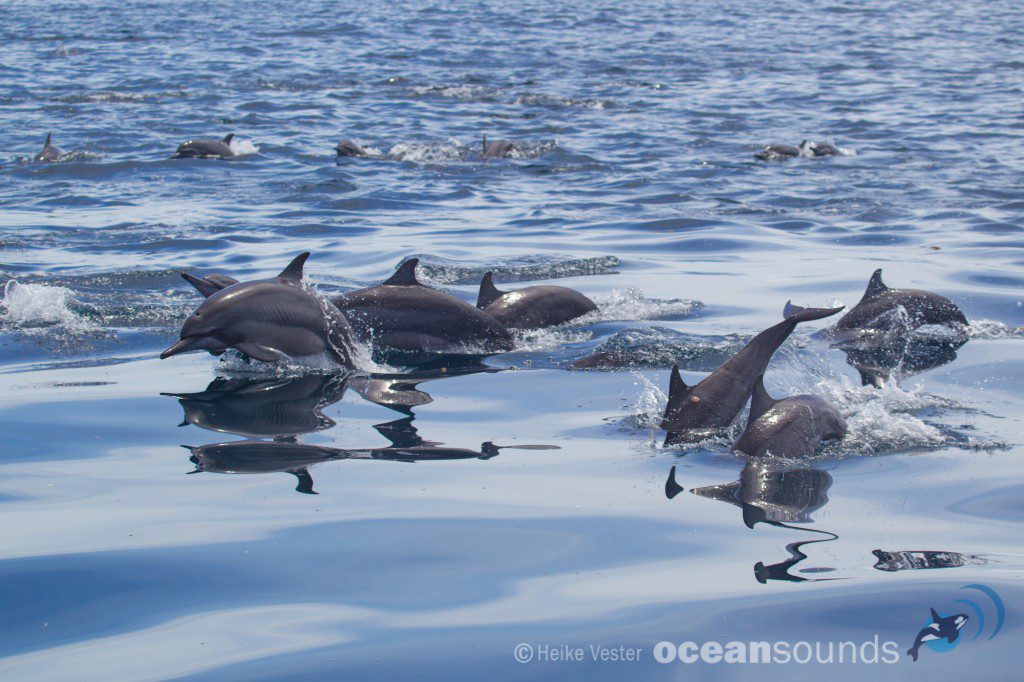 Horrified by the poor animal welfare standards of the local whale watching tours in Norway, Heike produced clear guidelines for whale watching operations to avoid stressing the whales. The guidelines are now extensively used in whale watching areas throughout the world and available on Heike’s website : NGO Ocean Sounds (ocean-sounds.org). 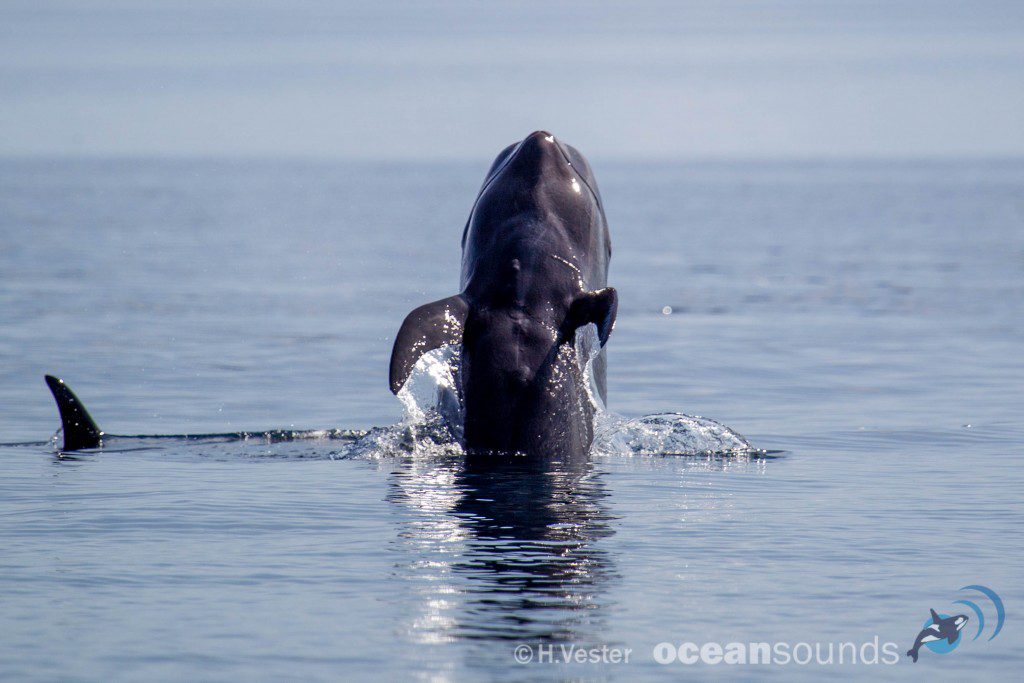 Heike arrived in Pulau Birie, a tiny indigenously-owned island in Raja Ampat, in February 2015 with her colleague Paddy Griffin. Peter Rozman, co-owner of PPER invited Heike after hearing reports of pilot whales and occasional orcas spotted in Raja Ampat. Within days Heike had identified 14 whale species present in abundance in Northern Raja Ampat! Naturally, Heike returned to carry out a further four months of research until March 2016. She studies the topography of the area, then goes out in a boat with her recording equipment to listen for whistles and clicks. ‘I couldn’t believe that, instantly, we were identifying species not really known to exist in the area. Very quickly we spotted Bryde’s whales, sperm whales and pygmy sperm whales. Raja Ampat has pygmy everything! Then short-finned pilot whales, orcas, false killer whales, pygmy killer whales, lots of different dolphins – some species yet to be identified. It’s very exciting. I believe the whales actually feed, live, breed here – they’re not just passing by. It would be wonderful to establish a whale sanctuary in Raja Ampat, to give them protection. To develop the policies and practices that will protect Raja Ampat’s whales, we need to start working with local shipping and petroleum companies, with regional government and other conservation organisations and especially with the people of Raja Ampat to make sure we don’t lose all this. I have worked in Patagonia and Chile where we have established sanctuaries, but this is even more amazing! We have seen enormous pods of mixed dolphins, over a thousand, all living together.’ 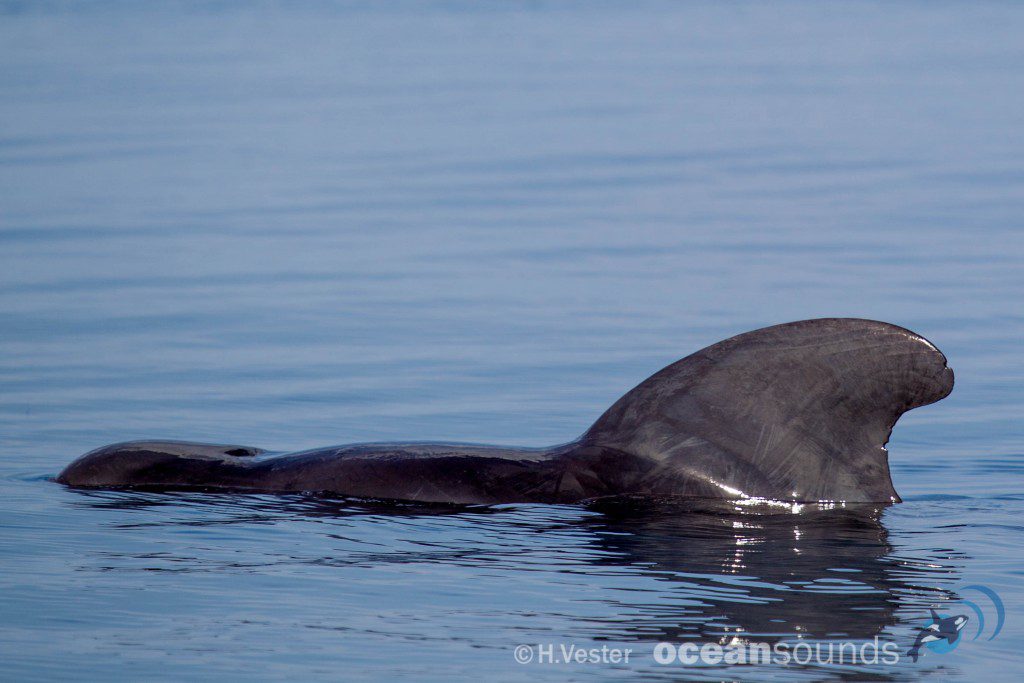 Heike’s work in establishing a photo identification database is already showing that there are stable groups of whales and dolphins living in the area. She is discovering more about the behaviour of each species such as the pairings of pygmy sperm whales and matrilineal groups of pilot whales. She even has evidence that indicates communication across different species – an astonishing prospect. 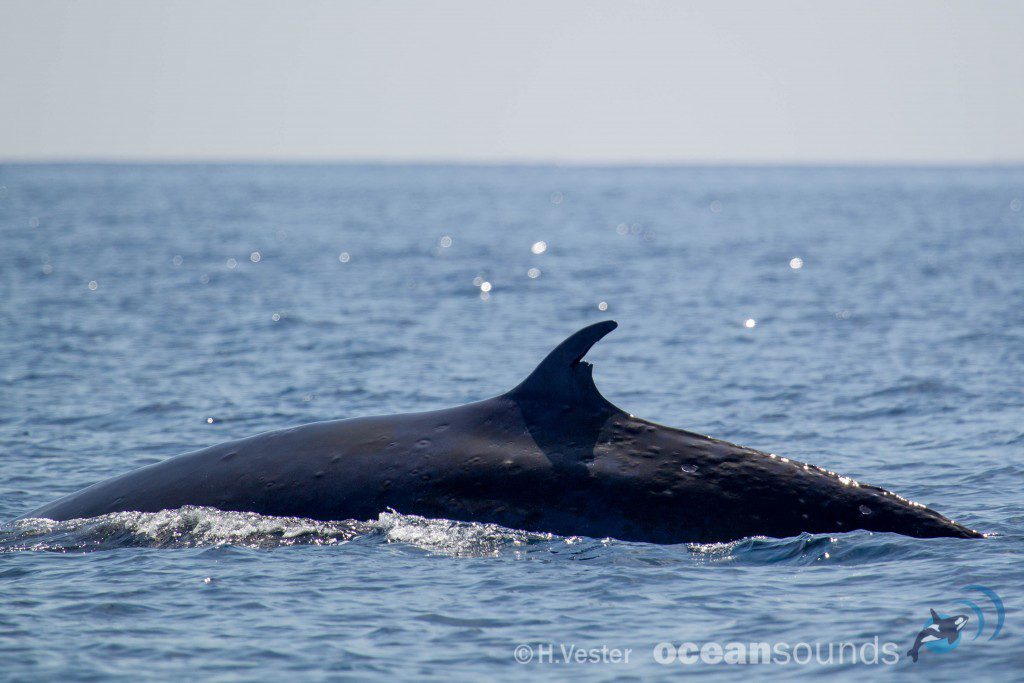 Heike’s recent research has shown evidence of Bryde’s whales feeding and reproducing in the area. She recently saw a new born Bryde’s calf along with other calves under a year old. Heike would like to emphasise how important it is for anyone spotting the whales to not venture too close, to turn off the boat engines and to allow the whales to approach the boat if they wish too…and they often do as they seem curious. There are a number of Bryde’s whales in the Dampier Strait with the beginnings of a photo database.

So what needs to happen next? ‘Well, we need more information about resident groups, about their behaviour, about potential new species, and we must get more people interested and involved. Everyone loves whales and dolphins and we need to use this interest to protect the animals. We all need to learn more about how we each individually can help protect and care for whales and dolphins. For example, how we use and waste plastic day-to-day, and how to deal with plastic rubbish in the sea that you find when diving, snorkeling or swimming. There are such amazing possibilities for Raja Ampat to show the world how to care for these fascinating, intelligent animals.’ 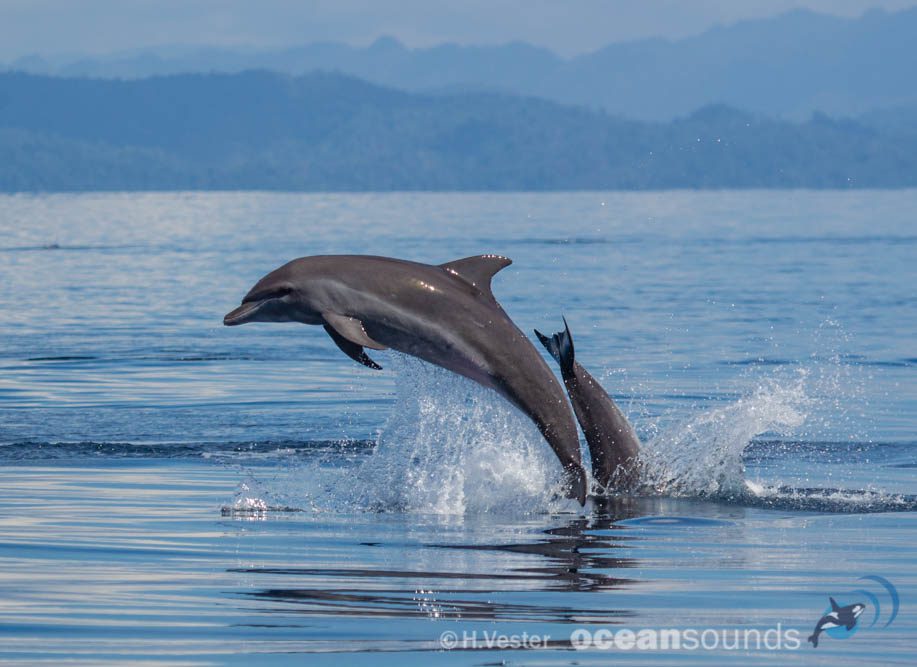 At a recent presentation to guests and staff at PPER, Heike outlined possible ways forward with her research. In the short term she plans to take all the PPER dive guides and boat crew out on her research boat for them to learn about whales and dolphins and to be able to spread the word about good boat practice. ‘PPER, and especially Justin and Cheryl Duerden, are so supportive and genuinely enthusiastic about the research. Now we need to involve others. I would be really happy to talk about my work to anyone and to explore how we could co-operate. Just now, I can’t really cope with lots of volunteers but I hope in the future to have more people working on this project, and even now we could perhaps supervise academic projects.’ 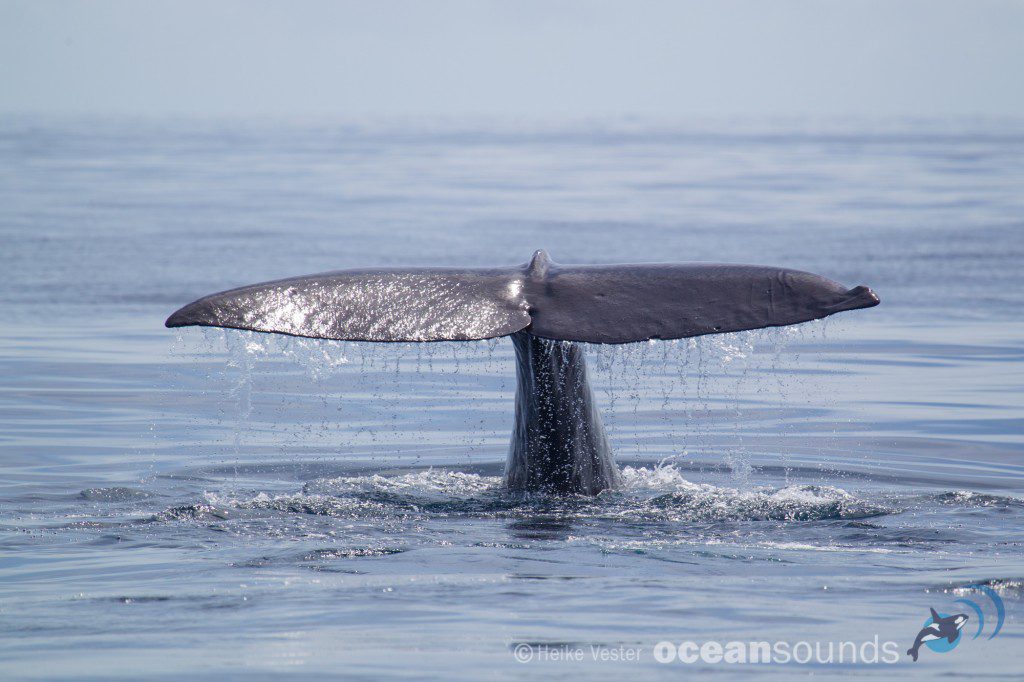 Heike’s enthusiasm about Raja Ampat’s marine diversity and abundance is contagious. She also loves the diving. ‘On one dive we saw 22 mobula rays, 26 bumphead parrot fish, countless sharks and huge shoals of fish as well as astonishing corals and fantastic topography. It’s inspirational and we need to treasure it.’

On the last day of Heike’s most recent trip she met up with Edi Frommenwiler on his live aboard, the MV Pindito. Together they encountered a large pod of Pilot Whales.  Edi captured some magical footage with his drone.

If you would like to meet Heike, ask questions about her work, share information, make a donation or become a supporting member of Ocean Sounds, please contact her directly on ocean-sounds.org.

Susan Hutchings is a Brit living in France, who retired early and learned to dive in Dominica; “I thought everyone saw eagle rays, turtles, sea horses and frog fish on every dive….”,  Five years ago she fell in love with Raja Ampat and now spends a couple of months there each year, escaping the European winter. She’s an enthusiastic SCUBA diver and takes underwater holiday snaps to share with friends and family and you.