Back in December 2014, I posted a photo of a strange new cardinalfish from Sebakor Bay in FakFak that appeared to be new, but that we needed to confirm with genetic analysis. I’m happy to report that our colleague Angka Mahardini at Udayana University’s Indonesian Biodiversity Research Centre was able to show conclusively with genetic analysis that this is indeed a new species of cardinalfish, which we have named Cercamia melanogaster in reference to its unique “black belly”. The paper describing this new species was just published this week: http://www.oceansciencefoundation.org/josf14e.html

This cardinalfish seems to be endemic to the Bird’s Head (bringing us up to 42 apparent endemic reef fishes!) and is now known only from Sebakor Bay in FakFak and a silty bay on Kawe Island in northern Raja Ampat. It seems to prefer silty bays subject to considerable freshwater influx, and is found in depths of 15-40m.

Speaking of new species, we’d like to enlist the keen eyes of all those travelling to the Bird’s Head to dive to help us confirm if two recently described species from nearby regions are in fact also present in the Bird’s Head. Gerry Allen and I recently described a new species of pipefish, Festucalex rufus, from Milne Bay Province, Papua New Guinea. This beautiful but very cryptic red pipefish was reported to us by Lynne and Roger Van Dok and Ned Deloach, who photographed it in Milne Bay in 2008. Lynne and Roger have also reported observing it in Seram, north Bali, and the Solomon Islands, so we believe there is a good chance it is also found in the Bird’s Head. It closely mimics a short tubular red sponge with which it is invariably associated. I’ve seen many of these sponges in northern Raja Ampat, but have yet to find the pipefish – we’d love to hear from you if you do!

The other recently described new species we are interested in observations on is a catshark recently described by Fahmi at the Indonesian Institute of Sciences and William White from CSIRO in Australia. Atelomycterus erdmanni is closely related to the widespread catshark Atelomycterus marmoratus, but has far fewer white spots on the body as well as several distinctive morphological differences including a larger first dorsal fin. It is known with certainty from North Sulawesi and Ambon, where it is regularly spotted on night dives in depths of 3-62m. There is question, however, as to whether its range extends into Raja Ampat and the Bird’s Head. CI monitoring staff have several times reported and photographed dead cat sharks caught by villagers fishing off jetties at night that MIGHT be this species, or possibly represent an altogether different (and also new and undescribed!) species. Any divers managing to photograph cat sharks at night in the Bird’s Head are strongly encouraged to share these so we can determine which species is actually present. 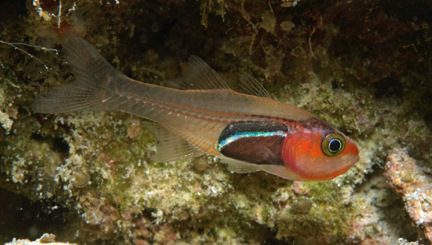 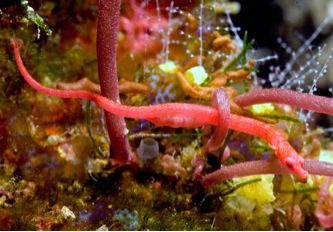 Festucalex rufus – a stunning cryptic pipefish that associates with small red tubular sponges, which it mimics closely. Will it be found in the Bird’s Head?
Photo: GR Allen 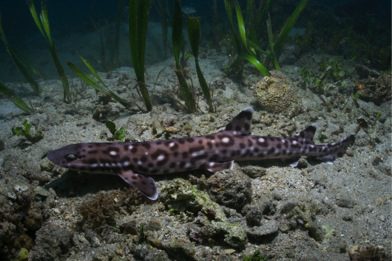 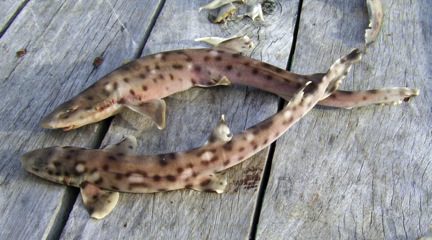 Atelomycterus sp. – these catsharks were caught by villagers handlining off the Saonek jetty. Though bearing close resemblance to A. erdmanni, we suspect they may actually represent an entirely new and undescribed species. More photos urgently needed!!
Photo: M Lazuardi