Sorong Nature Park** possesses a high ecological value. Apart from its natural vegetation’s layout, which generally is aesthetic; its ‘mini’ waterfall and the crossing of four rivers (Klawulu, Klasege, Pletok, and Klabeling) adds the potential of this urban forest being an attraction for both locals and travelers – whether they are in transit from, or to, Raja Ampat.

Its high ecosystem value, and a relatively accessible location, Sorong Nature Park – just like any other conservation area with similar context – faces various challenges that may, potentially, disrupt the ecological integrity. Whether they be direct impacts of the area’s irresponsible visitors, or as indirect impacts from a yet-to-be-effective urban management. 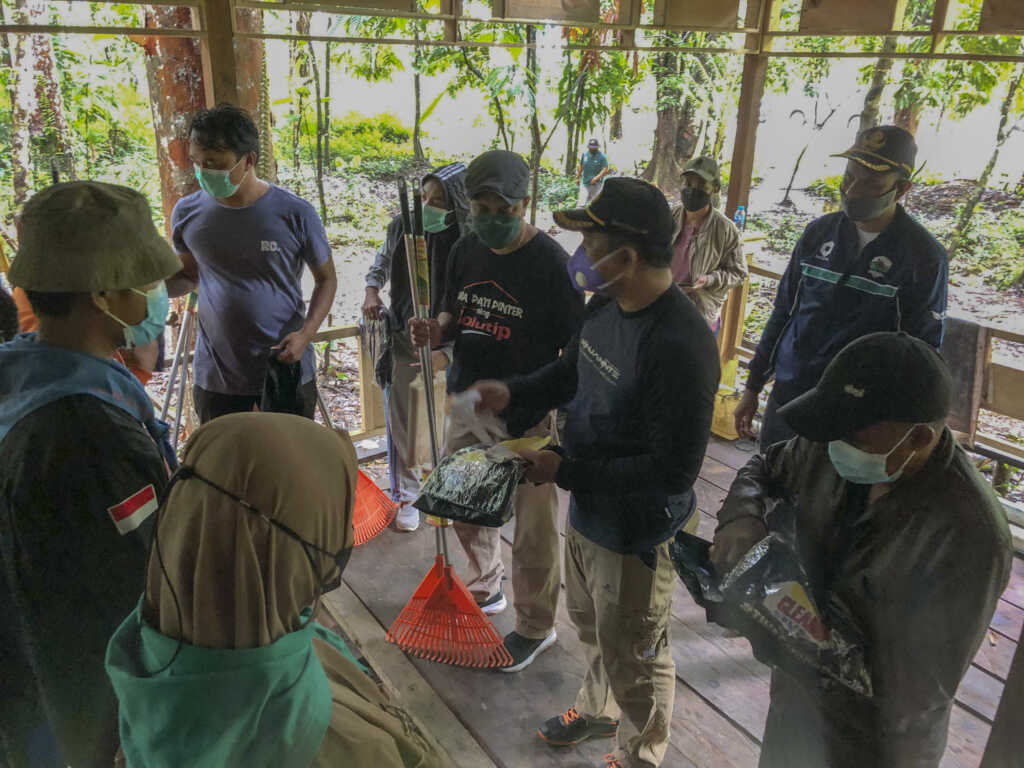 On a Saturday, 18th of September 2021, coinciding with World Cleanup Day, the Ministry of Forestry and Environment’s Office of Conservation of Natural Resources in West Papua collaborated with Conservation International (CI) Indonesia and organized a cleanup initiative in Sorong Nature Park.  Their efforts were joined by volunteers from Office of Management of Watershed and Protected Forest of Remu-Ransiki, Municipality of Sorong’s Sanitary Agency, and representatives from eight communities of nature enthusiasts based in Sorong and the surrounding areas. 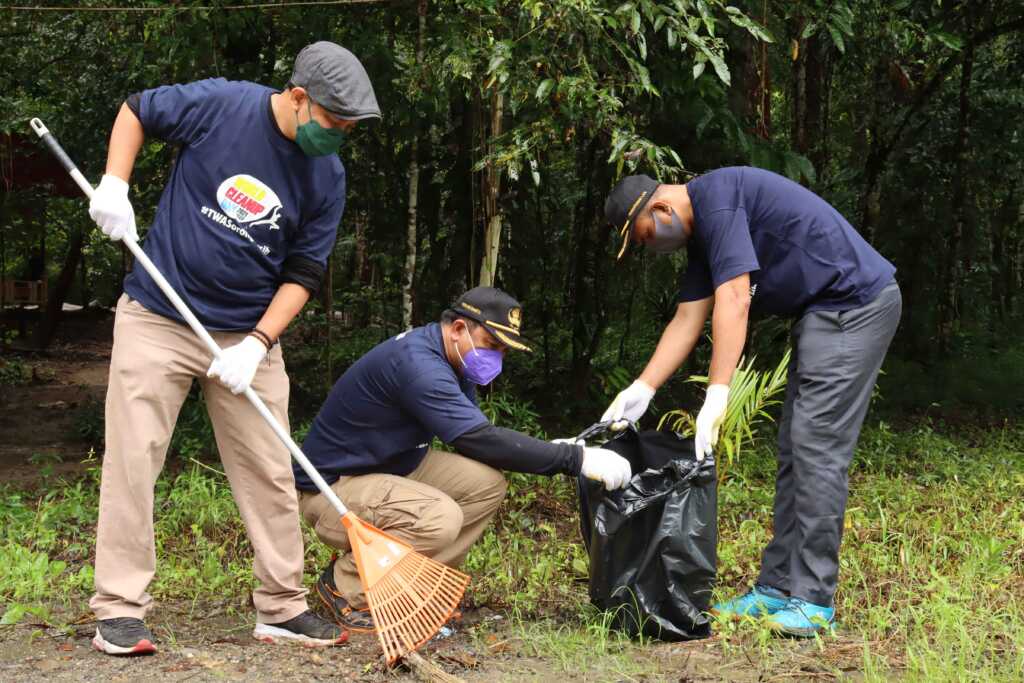 The cleanup event mainly focused on organic wastes, especially exotic weeds viewed as potential disrupters to the ecosystem balance within the nature park. And on inorganic wastes whose existence stems mostly from the area’s usage by irresponsible visitors, or carried in by the overflow of the four rivers during heavy rain.

During the opening ceremony, (Acting) Head of West Papua’s Office of Conservation of Natural Resources, Budi Mulyanto, S.Pd., M.Si., emphasized that Sorong Nature Park is a very important part of the town, then he continued, “It is our responsibility to safeguard it together. This forest provided us with clean water and air for the town folks. It also functions as healing forest, that is especially beneficial during this pandemic – let us preserve Sorong Nature Park.” On behalf of the office he also thanked all the volunteers, and reminded them to follow safe health protocols. 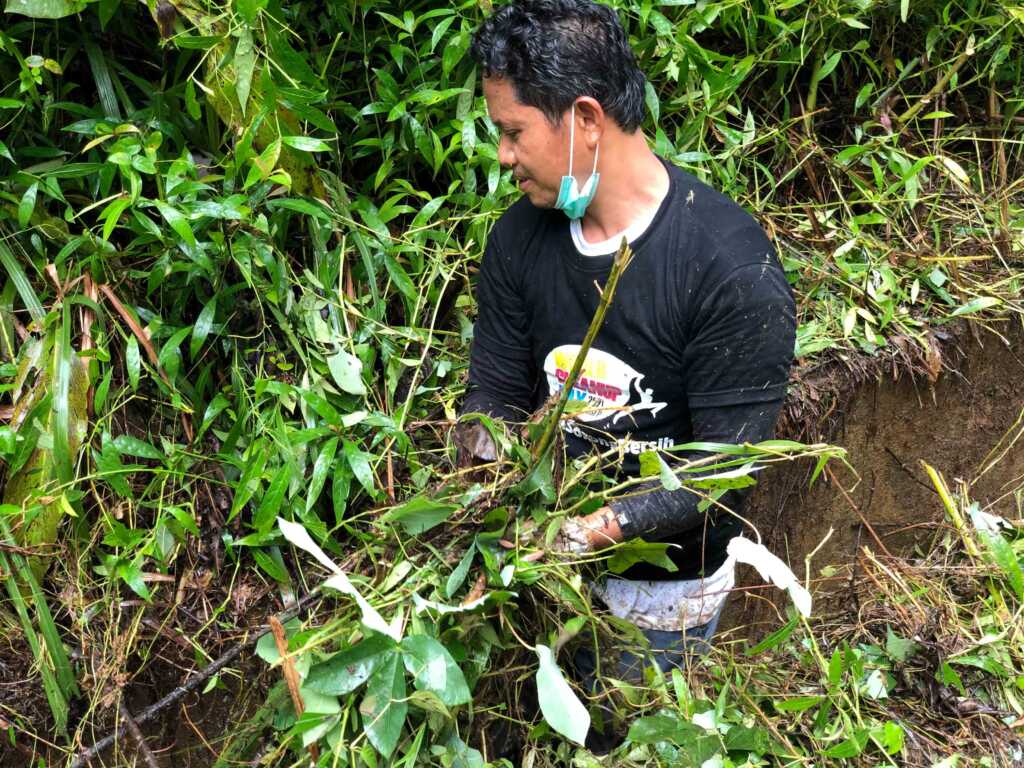 Volunteer from CI Indonesia cleaning up drainage ditches from tumbleweeds deemed to hinder the function of this particular infrastructure. (Photo by: CI Indonesia/2021)

After the opening ceremony, representatives of the West Papua’s Office of Conservation of Natural Resources directed and distributed a total of 67 volunteers, all equipped with cleanup tools, in to two focus areas: the entrance of the nature park, and the camp ground and its surrounding area. The cleanup event started at 8 am and lasted for the next 5.5 hours.

After the event Hartito Kanigoro, a volunteer from Tambrauw Nature Enthusiasts Group, disclosed that this is not the first cleanup event he attended in Sorong Nature Park. “From several previous visits, during my involvement (on cleanup activities in Sorong Nature Park), mostly we found plastic wastes and empty bottles from alcoholic beverages,” before urging, “This planet doesn’t need humans, we’re the ones who needs Earth. So, each visitor (of this nature park) must be encouraged to take their waste back with them, because forest is not a rubbish bin.” 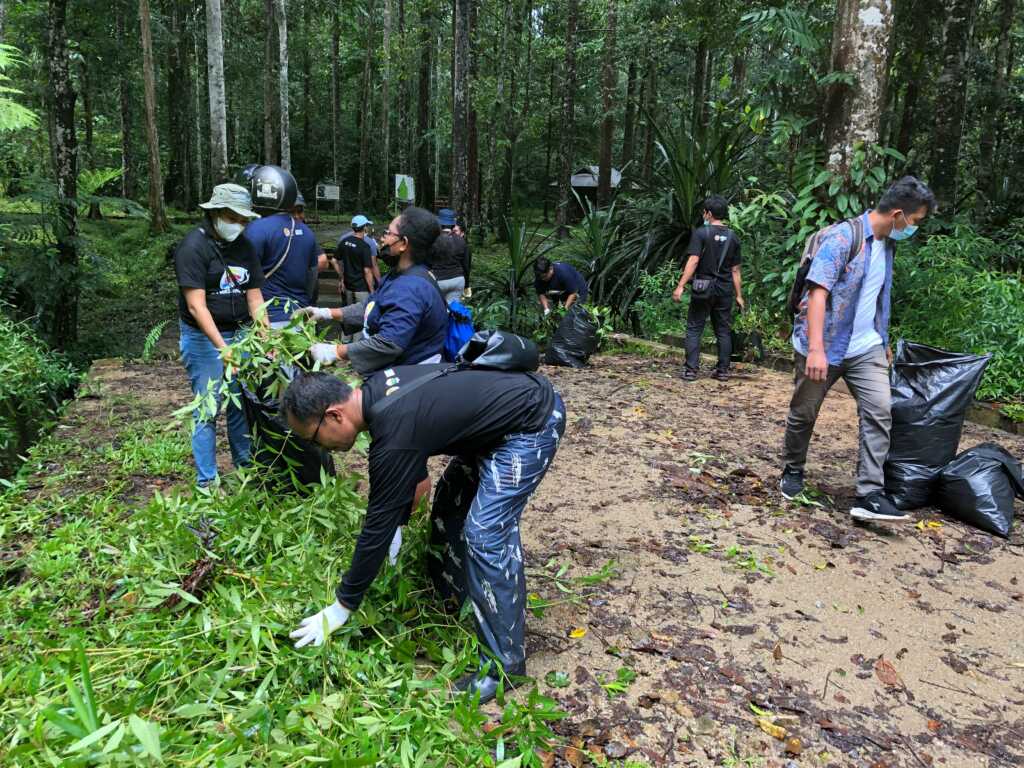 Volunteers cleaning up one area nearby the camping ground in Sorong Nature Park. (Photo by: CI Indonesia/2021)

Meanwhile CI Indonesia’s Bird’s Head Seascape (BHS) Tourism & Capacity Building Manager, Meidiarti Kasmidi, conveyed, “This activity is an effort to manage Sorong Nature Park, and one of its major issues, which relates to sanitary concerns; especially inorganic wastes.” She also said that in the future Sorong Nature Park development is expected to be based on sustainable tourism by harnessing its potentials which is derived from its flora and fauna diversity. Additional activities include the harvesting of honey and a plantation nursery, which would eventually provide benefits for both tourists and the communities living nearby the nature park. 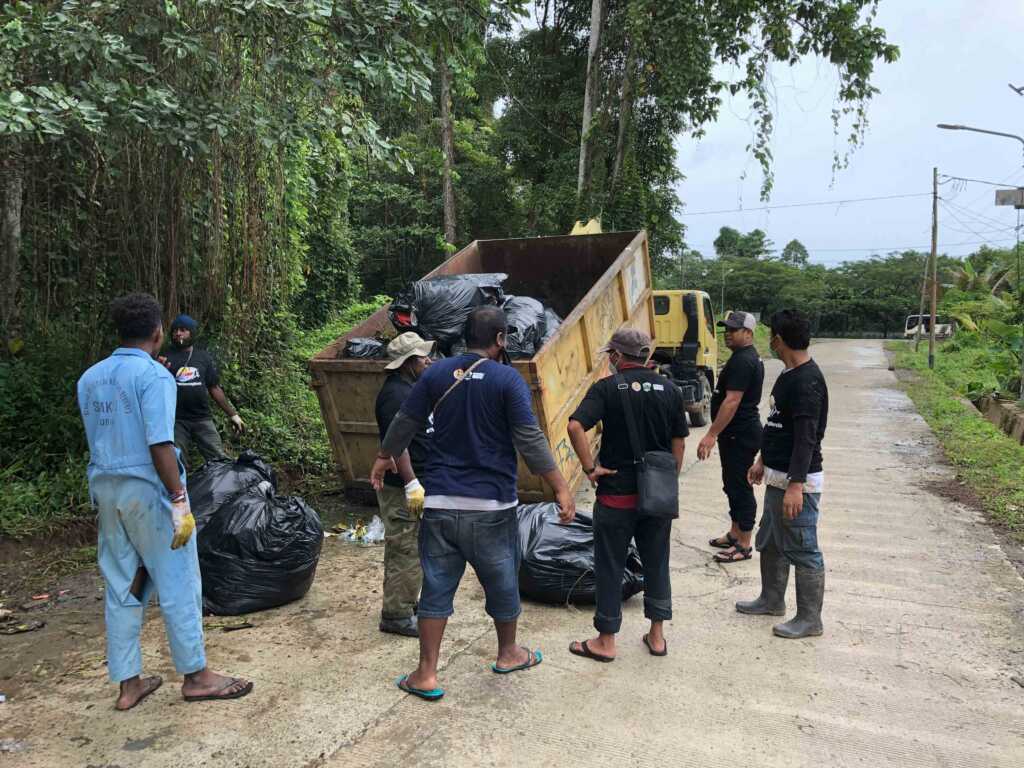 Volunteers of Sorong Nature Park’s World Cleanup Day 2021 filling the garbage trucks with some of their ‘collection’ for the day. (Photo by: CI Indonesia/2021)

The desire is for Sorong Nature Park to become a healthy, informative and diverse destination for visitors while providing locals with an environmentally sustainable, ecologically focused model for future park development.

* West Papua’s Office of Conservation of Natural Resources (Balai Besar Konservasi Sumber Daya Alam Papua Barat or BBKSDA Papua Barat in Bahasa Indonesia), which nested under the Directorate General of Natural Resources and Ecosystem Conservation, is one of the Ministry of Environment and Forestry’s technical unit in West Papua. Within its core function, BBKSDA Papua Barat, is tasked to manage several conservation areas in West Papua Province, which range from Wildlife Reserve, Nature Preserve, Nature Park, to conservation on specific flora and fauna both within and outside conservation areas.

** Sorong Nature Park comprises of 945,9 hectares of lowland forest, which is dominated by resin (Agathis labilardieri) and pine (Aracauria spp). The distribution of flora in this nature park is shared in to two structures: Plantation Forest Vegetation Structure, and Natural Forest Vegetation Structure. From the perspective of fauna diversity, Sorong Nature Park is the ‘home’ of at least 13 species of mammals, 51 species of birds, 16 species reptiles, and 3 species of amphibia.