Note: This article is the official press release composed and distributed by the West Papua Province’s Regional Research and Innovation Agency and its development partners.
(And it’s our forth report on the project.) 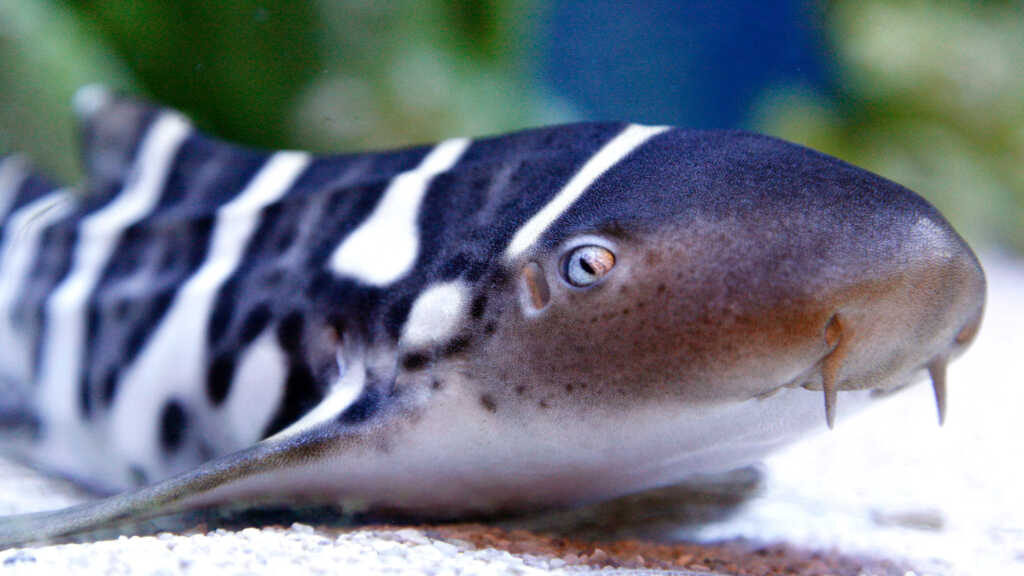 RAJA AMPAT, 19 AUGUST 2022 – The Regional Research and Innovation Agency (RRIA) of the West Papua Provincial Government has partnered with multiple stakeholders to restore the zebra shark population in Raja Ampat. Seven genetically appropriate zebra shark eggs arrived in Sorong on 10 August 2022, and are now being hand-reared in local nurseries to be eventually released into established marine protected areas (MPA) in Raja Ampat, as part of a global effort to safeguard the species.

The eggs, previously laid in zoological care, have traveled thousands of miles across the ocean to Indonesia, in coordination with multiple stakeholders at the national and provincial level, including the Ministry of Marine Affairs and Fisheries (MMAF) and the National Research and Innovation Agency (NRIA). Coordinated by ReShark, an international conservation collective made up of more than 60 academic institutions, zoos and aquariums, nonprofits and government agencies dedicated to the recovery of shark and ray species around the world.

The conservation effort, affectionately dubbed the “StAR Project,” for the Zebra Shark’s scientific name — Stegostoma tigrinum Augmentation and Recovery – was formally founded less than three years ago by a group of aquariums, conservation NGOs, academic institutions, and Indonesia’s national and sub-national government entities. In May 2021, the West Papua Government further solidified the commitment of the government entities when they hosted a high-level meeting bringing together multi-stakeholders to support this project including MMAF, NRIA, the Indonesian Institute of Sciences, NGOs, Steering Committee of the StAR Project, and Presidential Special Staff member Billy Mambrasar. 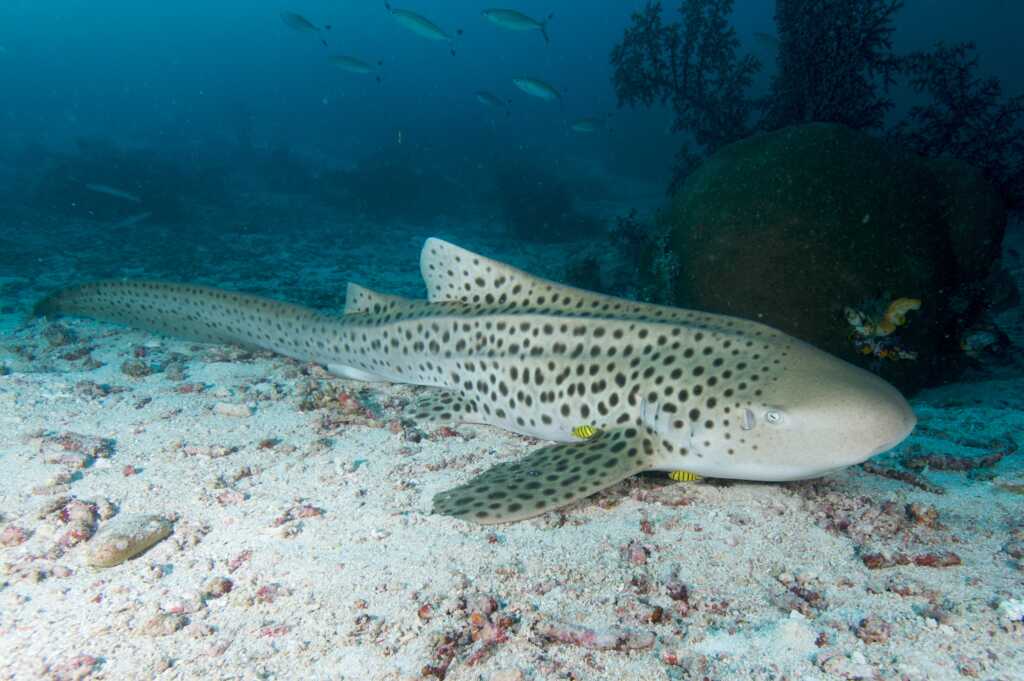 The StAR Project would not be possible without the leadership and commitment from the Indonesian Government, especially West Papua the Sustainable Development Province. The West Papua Provincial government is a global leader in the development of strong, well-enforced marine protected areas and a Shark and Ray Sanctuary that will safeguard the juvenile sharks when they are released. The enthusiastic support from government leaders and agencies in West Papua have contributed greatly to the success of advancing this novel conservation strategy.

The Acting Governor of West Papua, Commissioner General of Police (Ret) Drs. Paulus Waterpauw, M.Si, emphasized;  “The effort to restore the zebra shark population (StAR Project) is one form of the West Papua Provincial Government’s commitment in implementing the Sustainable Development Policy in West Papua according to Special Regulation No. 10 (2019). In the long-term, this project will support ecotourism activities in West Papua and become a part of our youth capacity building in the project site”.

The West Papua Provincial Government will continue to support this activity with its authority and capabilities. They will remain open to cooperating with the ReShark Consortium. They hope to collaborate not only to restore the zebra shark population but also to restore the population of other threatened species in terrestrial and aquatic ecosystems. “This is a proud moment for us, because the success of this egg delivery coincided at a special time for the Republic of Indonesia, as a gift on the 77th anniversary of our Independence Day”. 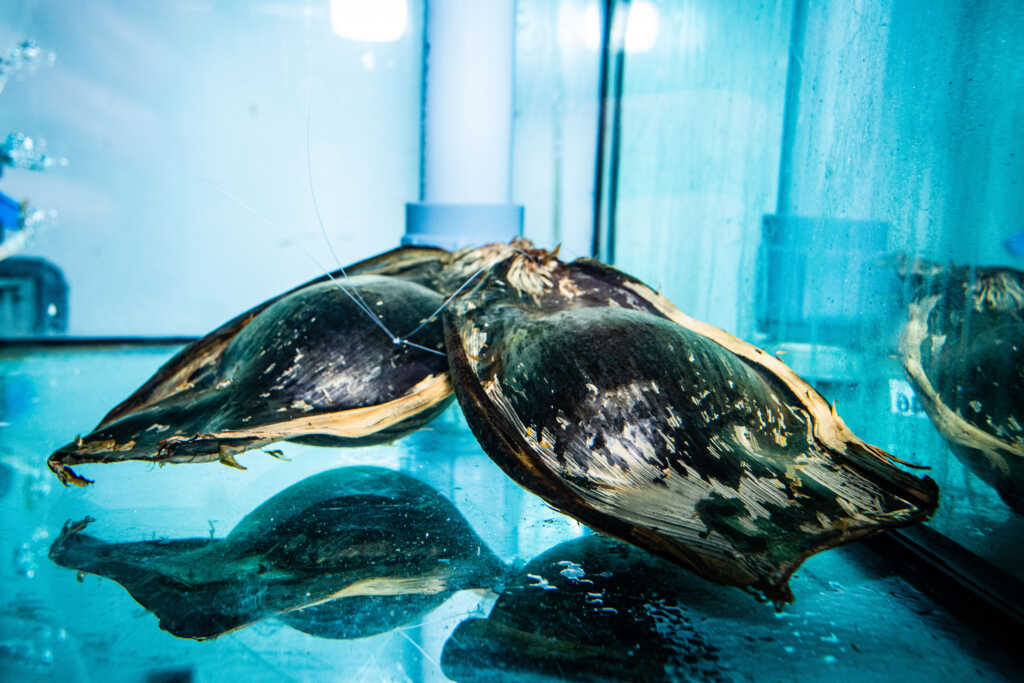 Professor Charlie D. Heatubun, Head of RRIA of West Papua who is responsible for this StAR project said that the project is an innovative approach to restoring zebra sharks as an important species in Raja Ampat, the “marine global epicenter of the biodiversity”. Heatubun says, “This project demonstrates the West Papua Provincial Government’s strong commitment in implementing Sustainable Development in West Papua Province to maintain a healthy environment and protection of species, in order to provide sustainable economic benefits for West Papuan people through sustainable tourism. As charismatic species, the zebra shark population recovery will benefit diving tourism that has been growing well in Raja Ampat. In collaboration with national and international partners, the StAR project is expected to provide interesting research opportunities for young researchers in West Papua.”

“This project is a multi-stakeholder collaboration to restore zebra sharks, especially in Raja Ampat marine ecosystems. In addition to its conservation impact, this activity will also open opportunities for researchers and academics for related studies including biology, ecology, aquaculture techniques, and marine ecosystem health. This model for restoring zebra sharks is not only a first for Indonesia but it’s the first time it’s happened anywhere in the world, so this will hopefully raise Indonesian profile on conservation efforts and scientific innovation related to zebra sharks with the international audience,” said Dr. Fahmi, Senior Researcer from the Research Center for Oceanography, NRIA, Republic of Indonesia.

As the management authority of National MPA in Raja Ampat, Imam Fauzi, Head of Kupang National MPA Agency and the Directorate General of Marine Spatial Management MMAF explained that the zebra shark is one species shark that is still often caught and traded in Indonesia. It is globally designated as an endangered species.  “The designation of MPAs is part of our efforts to preserve and restore marine ecosystems and its species. Therefore, efforts in preserving zebra sharks will support their population’s recovery in West Waigeo Islands Marine Protected Area, which eventually is expected to create a spill-over effect in Raja Ampat marine ecosystem.”

In the recent decades, several accredited zoos and aquariums have had incredible success with breeding zebra sharks in human care, building genetically diverse and sustainable populations. This dedication and scientific management are what has positioned these facilities to deploy eggs that may allow this population to return from the brink.

“The arrival of seven zebra shark eggs to the nursery built at the Raja Ampat Research and Conservation Centre (RARCC) represents years of hard work from hundreds of experts from 13 countries – all with the shared goal of restoring zebra sharks to their historic numbers in Raja Ampat,” said Dr. Erin Meyer, Director of Conservation Programs and Partnerships at the Seattle Aquarium and Chair of the StAR Project Steering Committee. “This is only the beginning. This innovative model of shark conservation is a world first, and we plan to apply what we learn to recover other endangered sharks and rays around the world.”

The zebra shark eggs arrived from SEA LIFE Sydney Aquarium in Australia – one of just four zoological facilities in the world officially invited to serve as a breeder for this conservation project. To be selected, aquariums must go through rigorous DNA testing to ensure that the genetic makeup of the sharks in their care match those of the shark population of Raja Ampat, provide detailed information on disease risk of animals in their care, and commit to targeting breeding of appropriate individuals.

“Our aquarium team worked in lockstep with fellow experts to ensure the safety and viability of the eggs in their journey to Indonesia,” said Laura Simmons, Regional Curator Australia/New Zealand with Merlin Entertainments who is based at the SEA LIFE Sydney Aquarium. “This effort really underscores the relevance of zoos and aquariums and our collective mission to help protect and safeguard species.”

On the day of departure, the expert team at SEA LIFE Sydney Aquarium carefully packed eggs with up to 16 litres of oxygenated water per bag, closed tightly with rubber bands, and placed them securely inside of transport boxes which were then sealed and labelled for their flight. This packing method ensures the safe travel for the eggs as well as the water quality necessary for up to 40 hours transit. 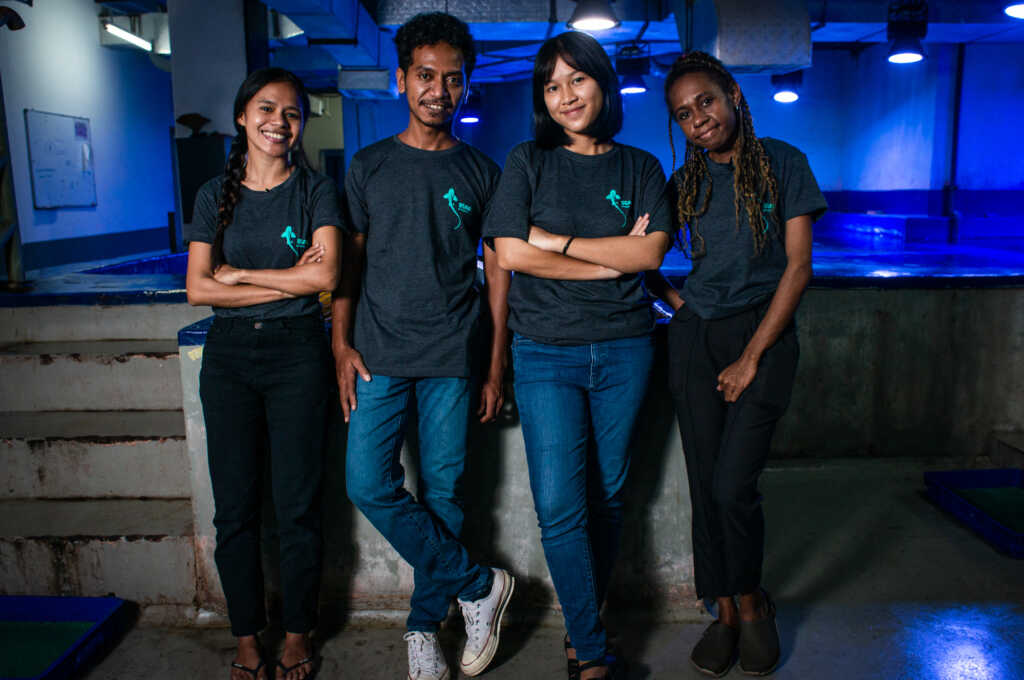 StAR Project’s four shark aquarists, aka “Shark Nannies”, went through an intensive training at Jakarta Aquarium and Safari and will be based at the nurseries in Raja Ampat. (Photo Credit: Indo Pacific Films)

Local communities in Raja Ampat built nurseries that were specially designed for the care and welfare of shark eggs and pups. Sophisticated life support systems utilize the surrounding seawater to fill the habitats for the eggs and young sharks. A team of local people were trained at the Jakarta Aquarium and Safari in March 2022 to learn shark handling, husbandry and care techniques—these newly trained aquarists, known now as the “shark nannies”, will care for the eggs and pups.

“The StAR Project invited Indonesian conservation leaders and communities to the table at its inception,“ said Nesha Ichida, StAR Project Manager in Indonesia. “By centering local expertise and building capacity for local leadership, we ensure that the multi-national team considers local knowledge, needs and perspectives in decision-making, which in turn ensures that the project is feasible, effective, and enduring.”

With partners in Indonesia at the helm, StAR project–a part of ReShark– works shoulder-to-shoulder with communities in Raja Ampat, ensuring this project is sustainable long-term by sharing resources, building local capacity, and co-creating public education opportunities around the species. 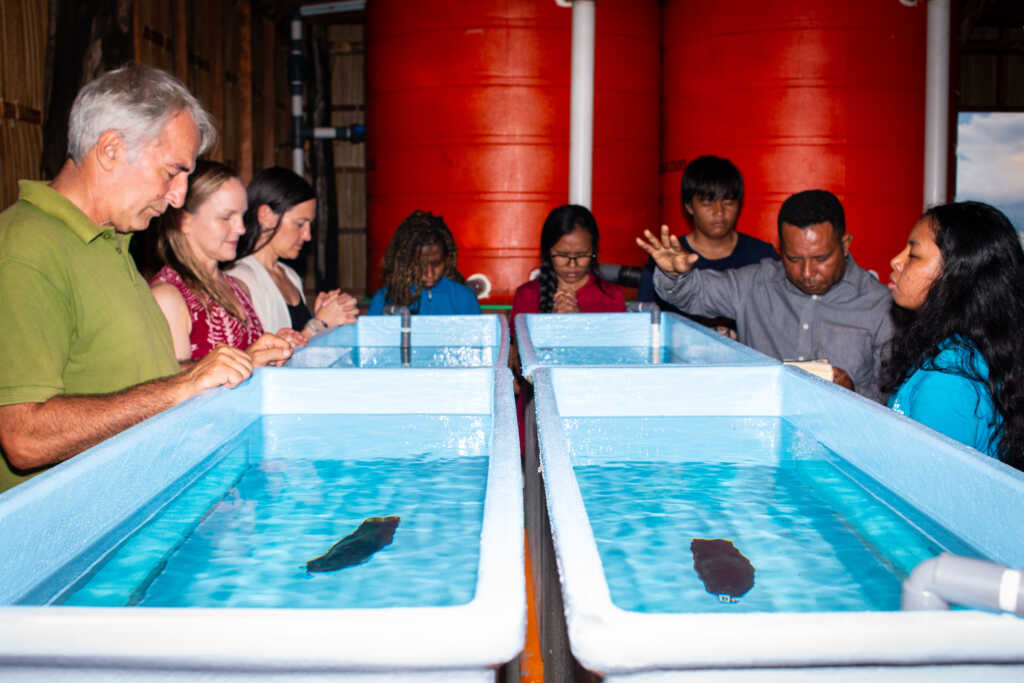 This egg delivery was the first of two ReShark hopes to be accomplished before the end of the year. As the eggs hatch, they will be under the care of specially trained, Indonesian aquarists. The sharks will continue to develop in hatcheries until they reach at least 70 cm and 1 kg and demonstrate the ability to forage for food on their own. Experts will then assess their health, tag them for continued monitoring, and release them into MPAs.

About the Regional Research and Innovation Agency of West Papua Province

About zebra sharks in Raja Ampat

Zebra sharks are listed as endangered by the (IUNC) International Union for the Conservation of Nature. In recent years, zebra shark populations in Raja Ampat (West Papua Province, Indonesia) have undergone dramatic declines in the wake of threats like habitat degradation and over-harvesting due to shark finning. Raja Ampat contains an extensive network of some of the world’s most well-enforced marine protected areas. These measures have enabled the dramatic recoveries of other shark species, however the Eastern Indonesian-Oceania subpopulation of zebra sharks remains on the brink of extinction. Due to a slow population growth rate, which is common for most shark species, conservation actions including fisheries regulations and the creation of marine protected areas have not been sufficient for recovery of this species. Research and conservation planning have revealed that the species is unlikely to recover without additional intervention.

About the StAR Project

The StAR Project, led by the West Papua Provincial Government, aims to recover zebra shark populations that are important for healthy marine ecosystems. This project involves multiple partners’ collaboration at the global and national levels to ensure zebra shark species are recovered and protected for the long-term benefit of the Indonesian people. Experts conceived that leveraging the proven breeding success and husbandry expertise of accredited aquariums could be critical in the recovery of this species. Through genetic testing, adult sharks from the Eastern Indonesian-Oceania subpopulation have been identified. These broodstock are being purpose-bred for the StAR project.

ReShark is an international collective of over 60 conservation organizations, aquariums, government agencies and more, dedicated to recovering threatened sharks and rays around the world by re-establishing healthy, genetically diverse, and self-sustaining populations. Restoring sharks to their native ranges will balance ecosystems, as these important predators maintain the food web and serve as indicators for broader ocean health.