Photos by Laura Leersnyder and Kaelyn Lynch and Conservation International

At Wicked Diving, we like doing new things and exploring new places. Earlier this year in Raja Ampat was no different. The Indonesian government gave us an opportunity we never hoped for and it was too good to pass by! But let me tell you from the beginning…In the past few months, Indonesia has taken impressive steps towards the protection of its underwater treasures and has brought the patrolling against illegal fishing to a whole new level. Any foreign operation caught within the Indonesian waters will be seized and sunk and the crew shall be arrested. With this new policy, the president aims at safeguarding the rights of his nation as this results in $20 billions losses annually. The sinking of two Thai vessels in Ambon at the end of last year was the first to make some noise in the press. 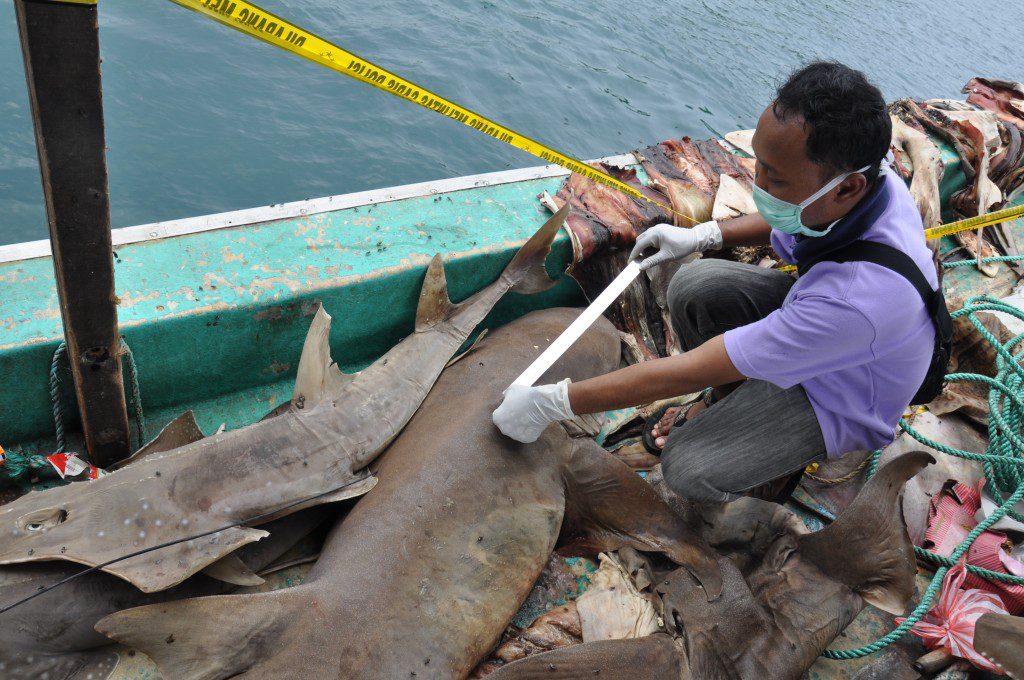 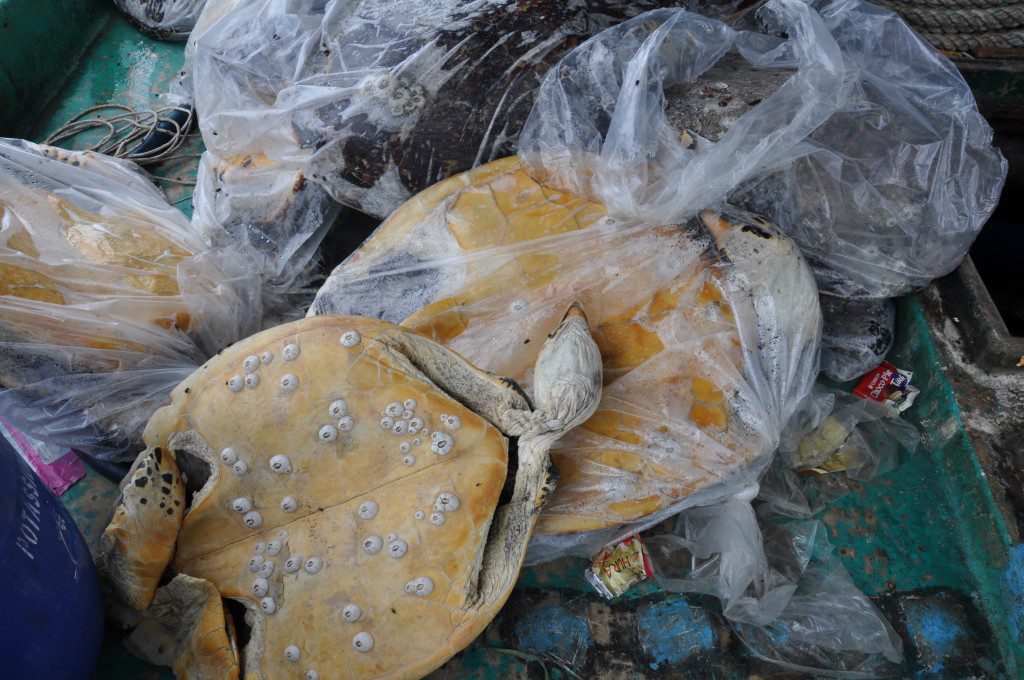 Just at the beginning of this year, in Misool, the authorities captured a Vietnamese vessel loaded with shark fins as well as unfortunate by-catch turtles and puffer fish still laying on the deck. Sadly, as they are highly sought after for shark fin soup, our fascinating friends have long been the targets of fishermen. The boat had become the latest and exciting attraction of the Waisai, Raja Ampat’s capitol’s harbor. Even the Wicked team had gone to investigate. Although most fins were packed away and covered by blue tarp, it was heartbreaking to see what once belonged to a beautiful leopard shark or bamboo or even whale shark! The plan was that this ship would follow the same fate as all illegal fishing operations later. In Indonesia, “later” can mean any time from a day to a month. Lucky for us, we only had to wait about three weeks and we were at the first row from our boat Bali Prima on the morning of the sinking… 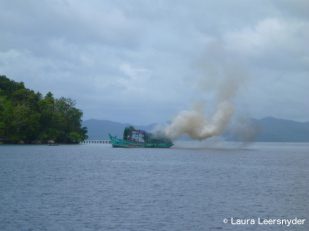 With hundreds of eyes locked onto the boat from a distance, the police and navy finally detonated their charges and a thick smoke rose up to the sky. Afterwards, everything went really fast. We were still watching the smoke when we realized the back of the ship was already lower and it only took five minutes for the entirety to disappear into the depths. It started with the back deck which then pulled the boat downwards with the bow pointing at the sky as if trying to come out again. The bow quickly sunk and the surface of the water bubbled for a few minutes. All the boats around drove over the location in what seemed like a farewell… 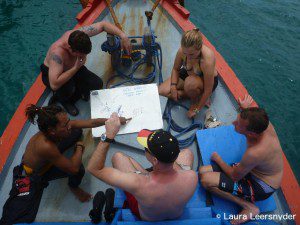 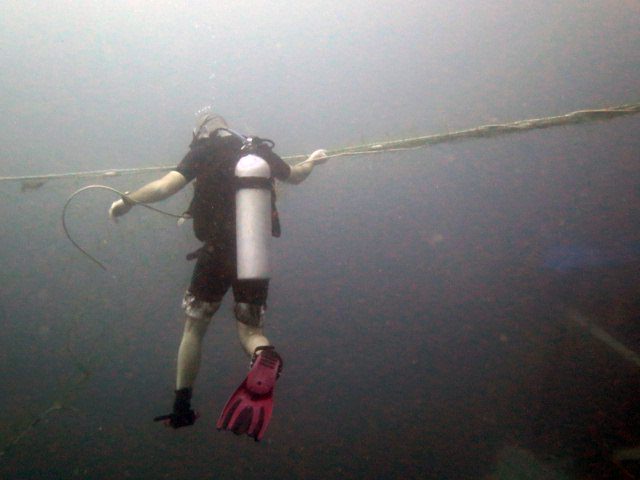 First to descend by Kealyn Lynch

What Wicked Diving did was better! We waited until enough time had gone by for the silt to settle and we threw our scuba gear on. Bali Prima took us closer to the location and then we started scouting for the exact location of the new wreck. Whilst snorkeling, we realized we were beaten at exploring the place as we heard and saw dolphins. They probably wondered what the fuss was all about and came to check out what had disrupted their morning routine. 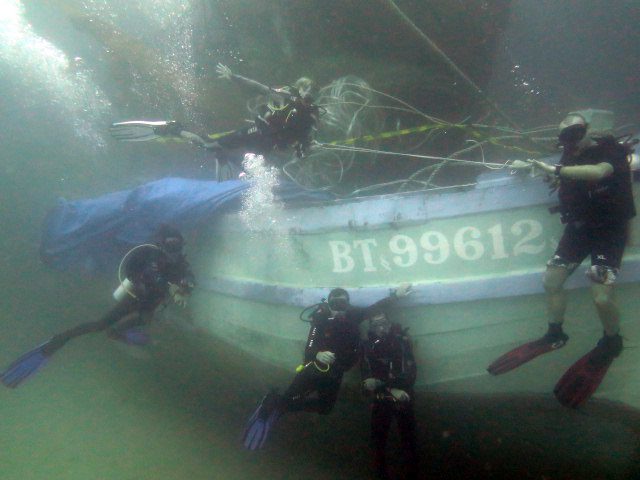 First on the wreck by Kealyn Lynch 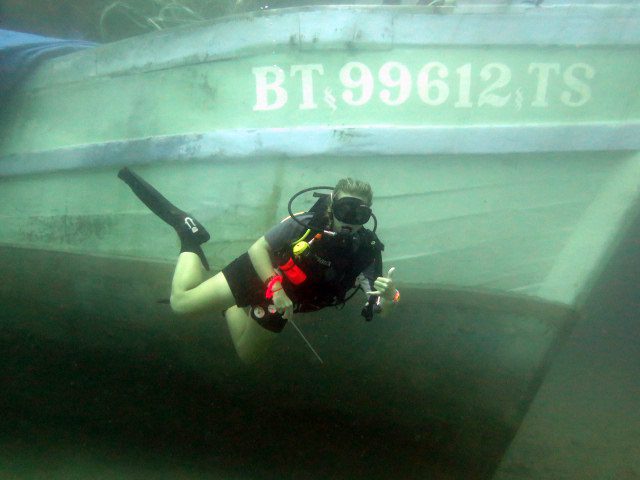 On the wreck by Kealyn Lynch

We were still the first scuba divers ever on the wreck. Just pointing out again: EVER! We were pioneers. Having watched the ship sink and being the first to visit it underwater was an amazing experience. We weren’t sure at first we would be able to properly dive it as it could have swung away from the island sinking a bit too deep but there it was, waiting for us at a perfect depth of 20-30m. We circled it, inspected all its curves and gapping holes. The remaining bags of shark fins were an impressive sight. At last, these poor creatures had returned to their home. Unluckily, the fishing nets which had been tied and left on the boat had come lose and part of it was spreading away into the current. Wicked Diving’s team did its best on that first one dive to minimize the impact and collected some rubbish as well. It was hard to tear ourselves away from the magic of the wreck once our underwater time was over. We had an amazing experience and will definitely return (maybe to share it with you if you visit us in Raja Ampat) to what shall now be known as the “SS Payback”. 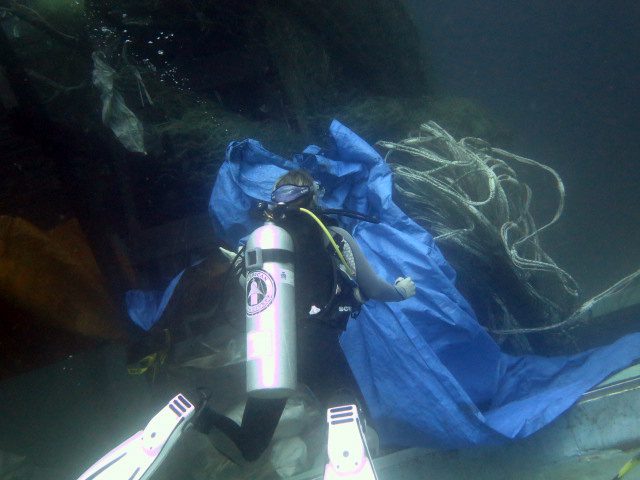 This new wreck site is on the Dampier Strait dive site map.

Born in Belgium, Laura Leersnyder fell in love with diving as she voraciously traveled the world until she finally dropped her suitcases and made scuba diving her profession in Indonesia. Now, with a base in Komodo, she works in amazing locations all over the country.

From the US, Kaelyn Lynch has worked in conservation and sustainable tourism in Indonesia since finishing University last May. She followed her ideals all the way to Komodo and Raja Ampat.