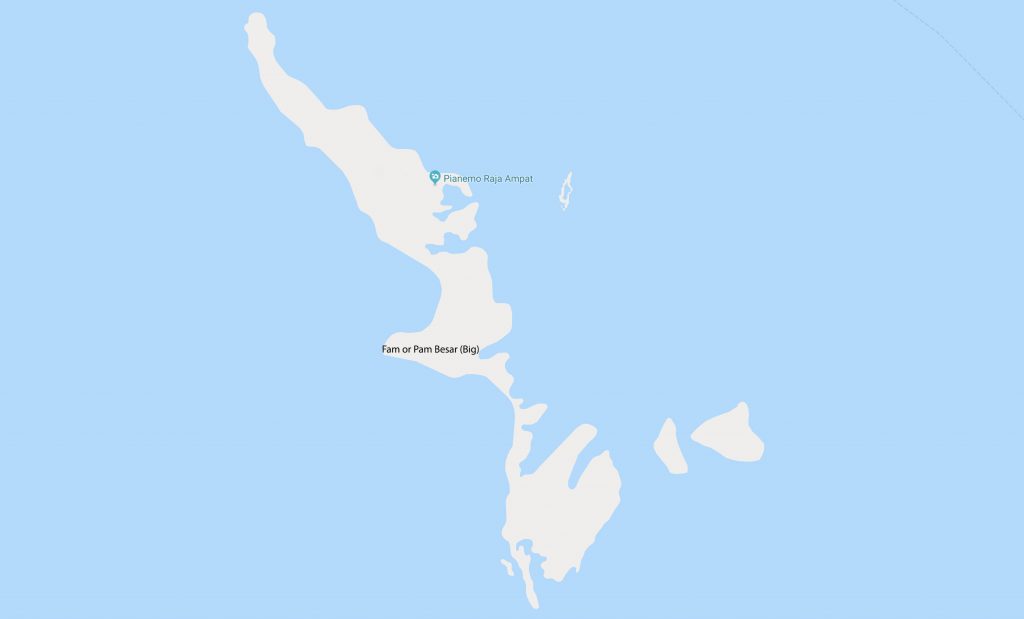 For those of you who are already quite familiar with Raja Ampat, perhaps the name “FAM ARCHIPELAGO,” wouldn’t ring a bell. But, if a friend of yours mentioned the name, “PIANEMO” (also spelled PENEMU), or “PYAI NEMO” in the local ,dialect then perhaps some of you would say, “Oh, that place.” Yes, that beautiful area with great diving that also has an amazing observation platform where you can easily climb to view its clusters of karst islets–some would even refer it as a miniature Wayag (the much larger and more well-known cluster of islets located in Raja’s far north).

There are only three villages within the Fam archipelago, which is in the District of Waigeo Barat Kepulauan. The village of Pam is located on the island called “Pam Kecil” (“Little Pam”), while both the villages of Saukabu and Saupapir are located on “Pam Besar” (“Big Besar”), also known as “Pam Bemuk” in the local language. Apart from those two islands, there are at least eighteen more islets which, as far as its known, are uninhabited. 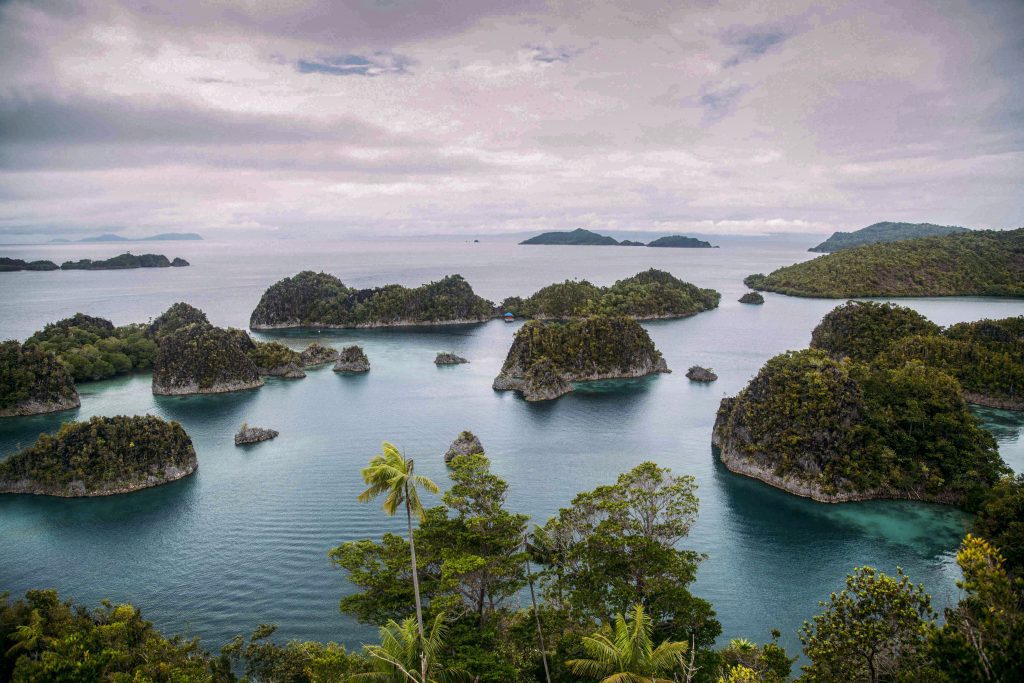 Pianemo (Penemu) taken from the observation deck. Within the past years, Pianemo has emerged as one of the ‘primary’ destinations in Raja Ampat. (Photo by: Nikka Amandra Gunadharma-CI Indonesia/2015)

Almost all members of the community in the Archipelago of Fam are descents of sailors originally from the Biak-Serui; islands in the north-eastern part of the Bird’s Head, areas which are located under the Seireri’s customary jurisdiction. The descents of these brave sailors have lived within the archipelago for hundreds of years, and their rights–though limited, have been acknowledged by the Maya tribe. The Maya Tribe, are Raja Ampat’s indigenous people, which established the Customary Council (Dewan Adat) back in 2000; hence they are the entity that has customary rights over both land and sea in Raja Ampat.  The people in Raja Ampat, as is common with other coastal areas, naturally had more possibilities to interact with settlers from elsewhere. These interactions drive the process of acculturation, which eventually generated a unique, cultural ‘synthesis’, which is exactly what happened in Fam Archipelago. 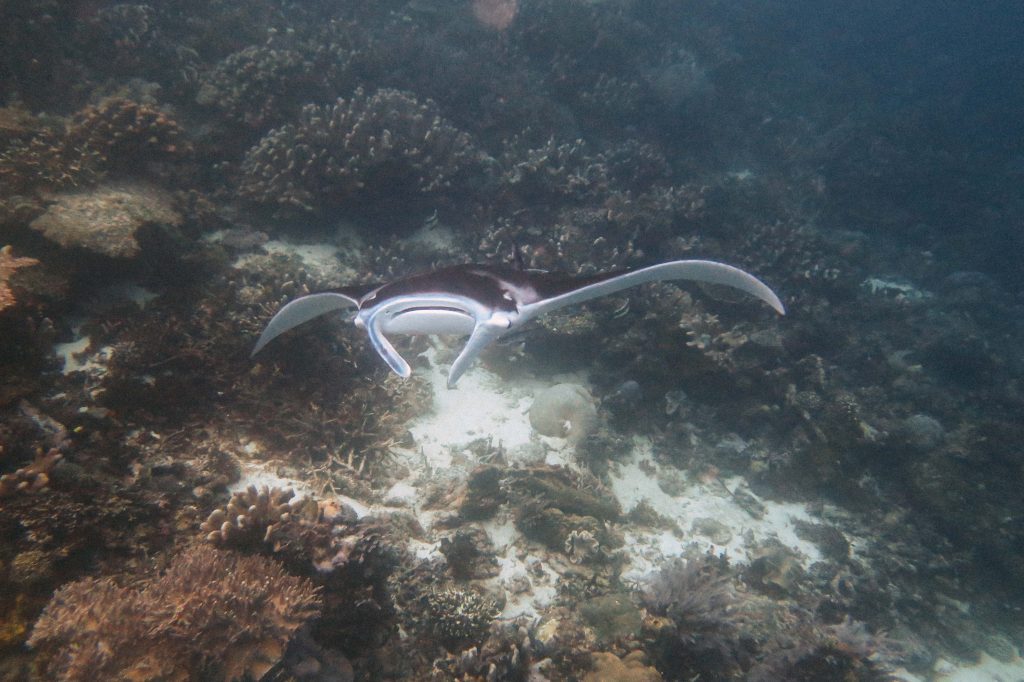 A Manta Ray encountered in one of the dive sites in Fam Archipelago as it gracefully swam toward the camera. To date, there are at least twelve commonly-known dive sites within the Archipelago. (Photo by: Ronald Mambrasar-CI Indonesia/2016)

In terms of biodiversity, just like in other parts of Raja Ampat, Fam Archipelago is blessed with high ecological value. From the perspective of habitat’s diversity this ‘mini’ Archipelago is representative of the habitats and ecosystems of all Raja Ampat. From karst islets, lagoons, fringing reefs, patch reefs, mangrove forests, to seagrass beds: you name it, they have it. So, from that perspective, it is fair to say that Fam Archipelago could also be referred as the ‘miniature version’ of Raja Ampat.

Back in 2013, Dr. Gerry Allen and Dr. Mark Erdmann, inventoried 707 species of fish during their surveys in Fam Archipelago; and in nearly all the sites visited, Sharks and Napoleon Wrasse were encountered. While the highest intensity recorded reached quite a staggering number of 357 species during a single dive session.

“Apart from reef fish, a research published by Benjamin Kahn back in 2007 suggests that Fam Archipelago is likely a migratory area for Indo-pacific Bottlenose, Bottlenose, and Spinner dolphins. In addition to those marine mammals, the Archipelago is an important habitat for the threatened Coconut Crab and Manta Rays,” explained Nur Ismu Hidayat, Conservation International (CI) Indonesia’s Bird’s Head Seascape Science & Monitoring Senior Coordinator. 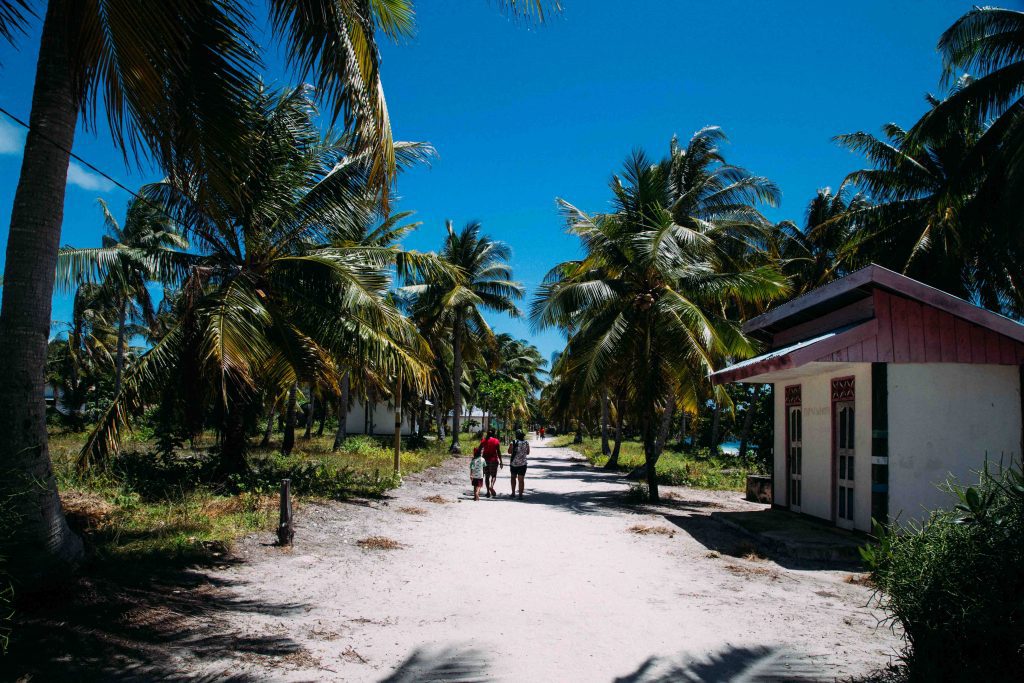 Another peaceful, Sunday morning in the Village of Saukabu; one of three villages across the Fam Archipelago. (Photo by: Nikka Amandra Gunadharma-CI Indonesia/2016)

As mentioned at the beginning of this piece, the abundance of natural resources in Fam Archipelago implicitly states its potentials for the tourism sector, which has significantly increased over the past few years. And with Pianemo as the ‘stepping stone,’ it is expected that in no time more tourists will go beyond the “beaten path” eager to explore the Fam Archipelago.