Despite being the world’s most bio-diverse marine environment, and arguably being very healthy, the reefs of Raja are not immune to the same problems encountered throughout the tropical world.  Recently, and not for the first time, there have been reports of a COTS outbreak on certain reefs in Raja.

We know that many visitors are very concerned, so are the Indonesians! Many are asking what, if anything, is being done to eliminate the problem.  In early September, a “stakeholder” seminar was held in Waisai, the capital city of Raja Ampat. The seminar’s goal is to establish a working protocol for dealing with COTS outbreaks. 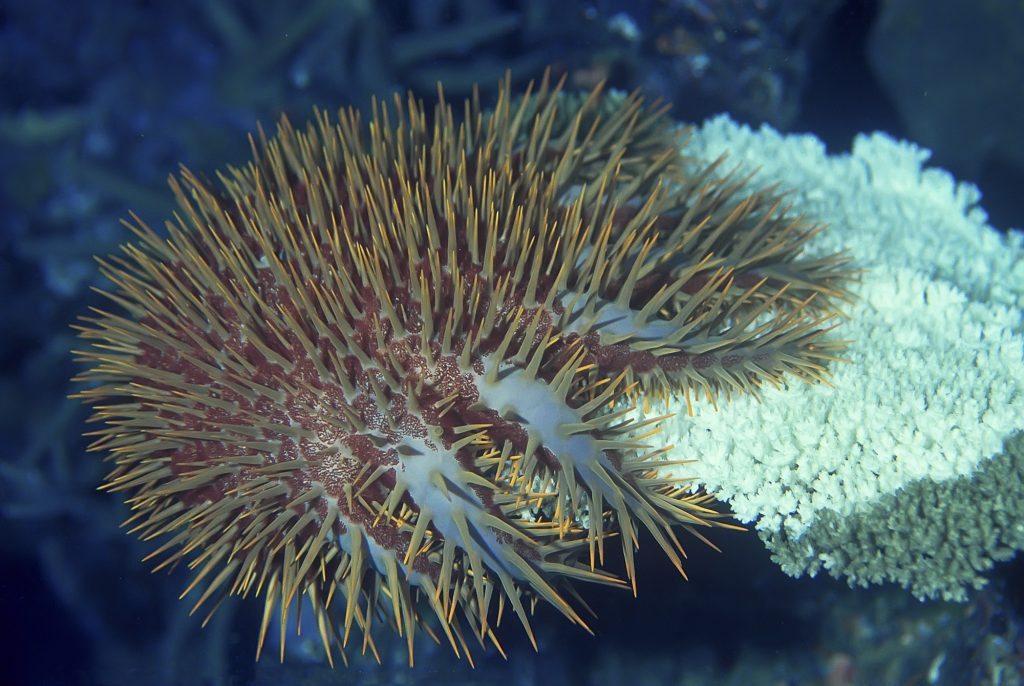 COTS are a natural predator of hard corals. It eats the coral’s polyps and leaves the (white) dead coral skeleton behind. ©Jones/Shimlock-SecretSeaVisions

But first here are the facts:

*COTS are echinoderms related to sea stars, sea urchins, trepang (sea cucumbers)–but with typically 14-21 arms (instead of 5) and poisonous spines!!

*Focus predominantly on fast-growing Acroporid corals (tables and branching corals), but eventually will eat any coral

*Adult female can produce up to 65 million eggs in single season –so there is always huge potential for outbreaks (though in general 99.3% of juveniles die within the first 2 years)

*Stay hidden in rubble/reef matrix feeding on coralline algae until 10mm (.4in) in size (≈6 months)

*Above 20cm (8in), they normally feed openly during day on corals

*Big debate in Australia, but now generally accepted that most outbreaks are at least partly human-caused

*With each female producing 65 million eggs in a season, even small increase in survival means MANY more starfish

Why is there a COTS outbreak in Raja now?

*Likely at least in part due to increased human activity:

*NO!!  But they can eat a lot of coral and degrade the reefs, particularly in areas with Acropora (plating/branching corals)

*We can probably limit the destruction, but eventually they will either starve or be killed –and then the coral can begin re-growing (much quicker than after bomb fishing or anchoring)

*Outbreaks and damage are likely to be very patchy around Raja. Regions dominated by soft corals (e.g., SE Misool) and rocky reefs (e.g., Kawe/Wayag) are not likely to be strongly affected

What should we do?

*Survey Raja to determine the extent of the outbreak by collecting data from tourism sector and villages with a focus on lagoons and other areas with lots of Acropora.

*Tourist divers and snorkelers should inform the staff of their liveaboard, homestay or resort plus file a report with RAEW (Raja Ampat Environmental Watch) or with
the UPT KKP office in Waisai (Contact person: Siti Nurdjana Sangadji (Nana), ayana.eureka@yahoo.com, (062) 0852-43022825)

*Encourage your liveaboard, homestay or resort to “adopt a reef” and commit to preforming at least one COTS “clean-up” dive every time you visit.

*Minimize the factors that cause COTS outbreaks: 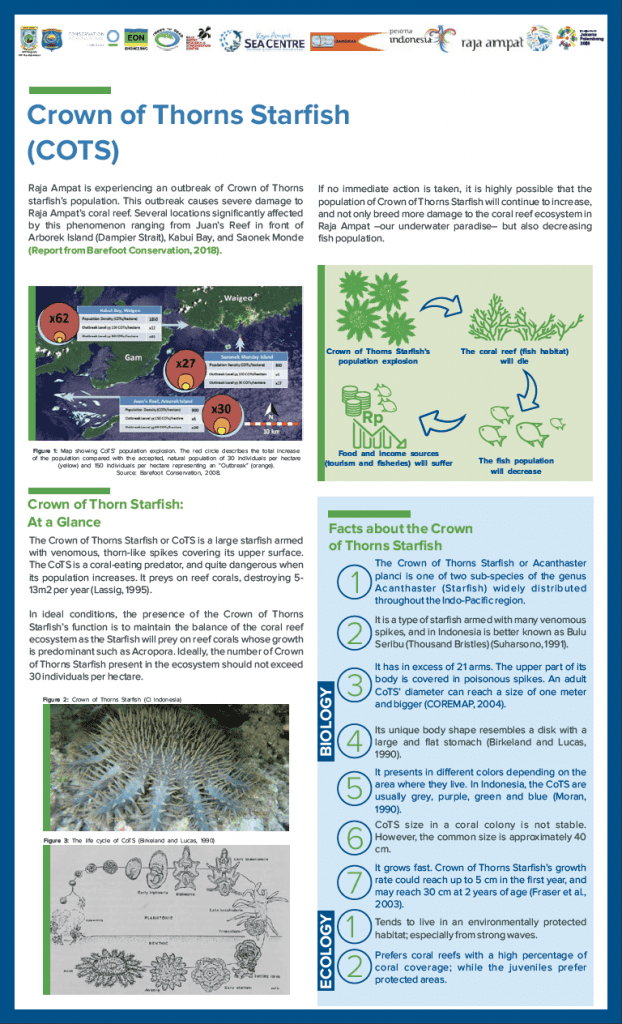 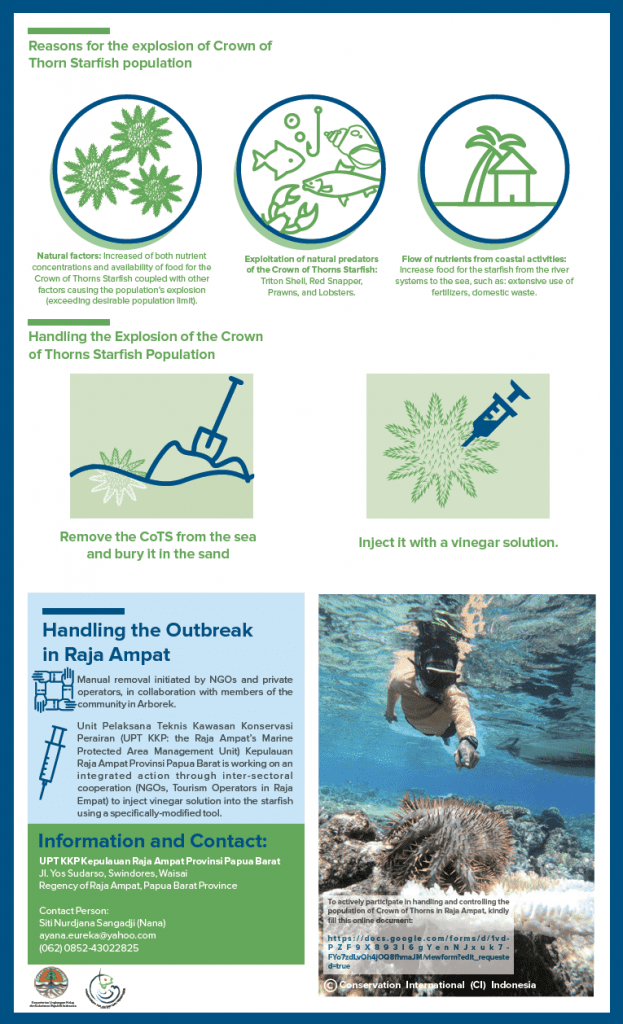 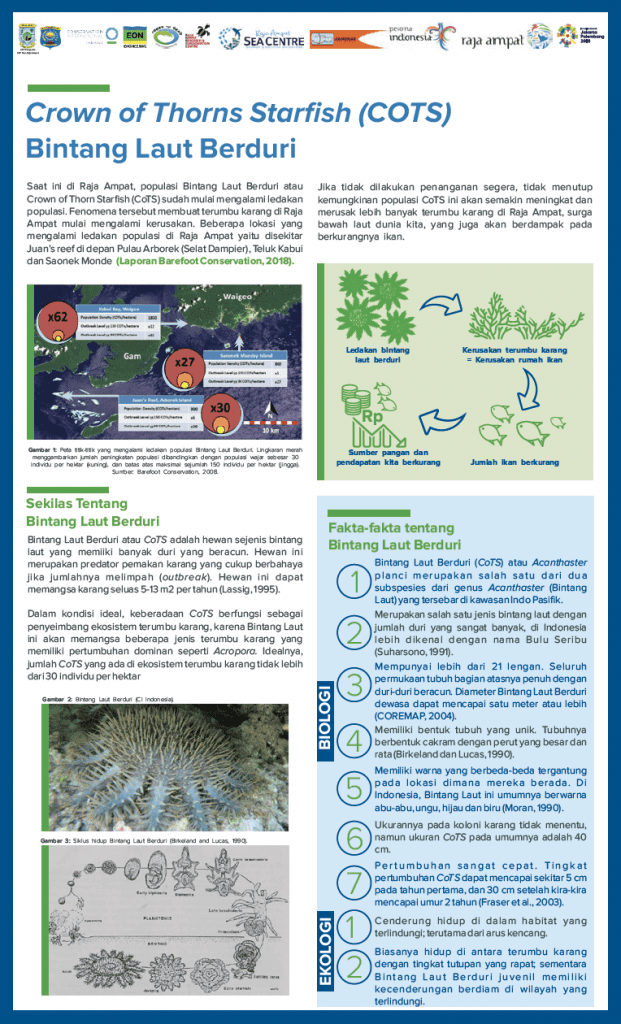 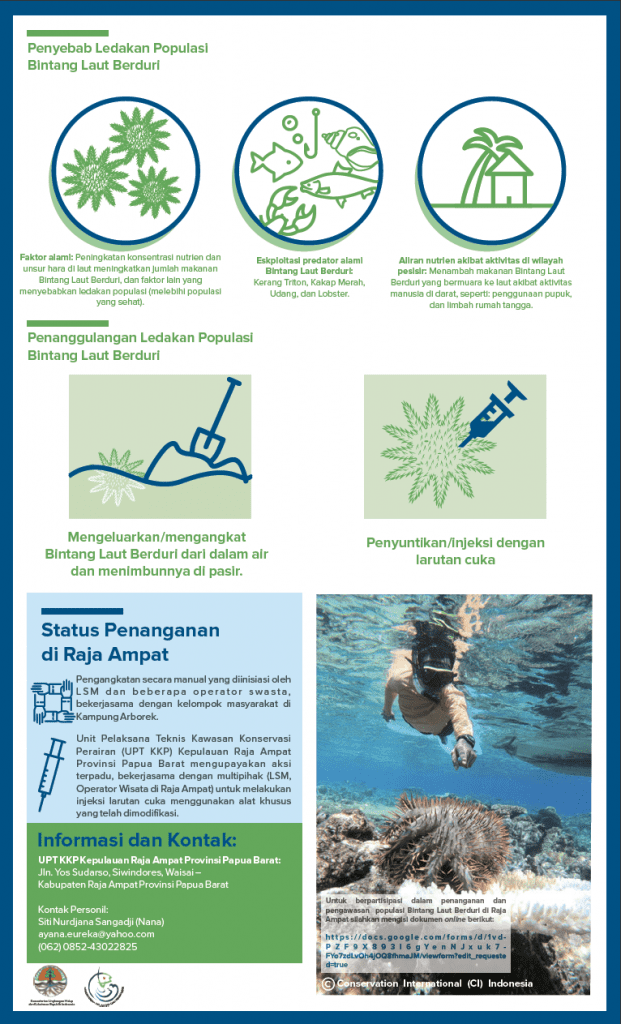 Mark Erdmann is CI’s Vice President for Asia Pacific Marine Programs, now based in Auckland after 23 years in Indonesia.
Burt Jones is the site’s administrator.