Bird's Head Seascape > Diving > Quotes from Dr. Richard Smith’s “The World Beneath: The Life and Times of Unknown Sea Creatures and Coral Reefs”

Quotes from Dr. Richard Smith’s “The World Beneath: The Life and Times of Unknown Sea Creatures and Coral Reefs”

Administrator’s note: Many of you may be familiar with Dr. Smith’s recurrent contributions to the website, including his series “Natural History Notes”, which he kindly creates exclusively for us.  If not, go to the site and check them out!  Richard recently released “The World Beneath: The Life and Times of Unknown Sea Creatures and Coral Reefs”, which is available now from Amazon globally and bookshops in the United States.  Although the book covers a wide range of locations, the BHS is frequently featured.  Here Richard shares quotes and images from his book. 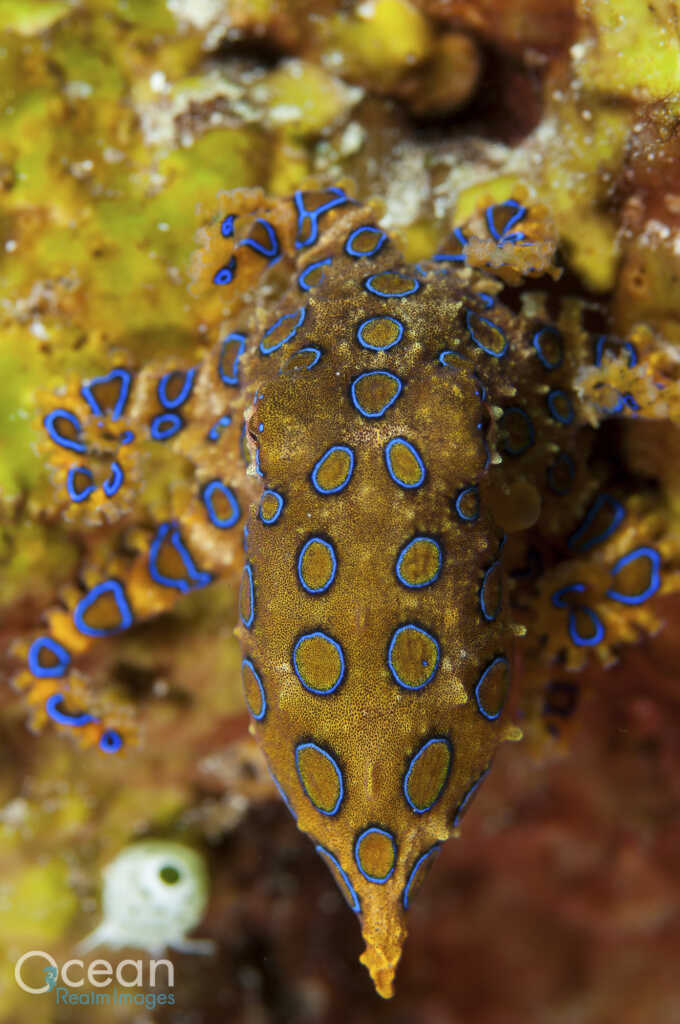 Introduction to the Bird’s Head Seascape 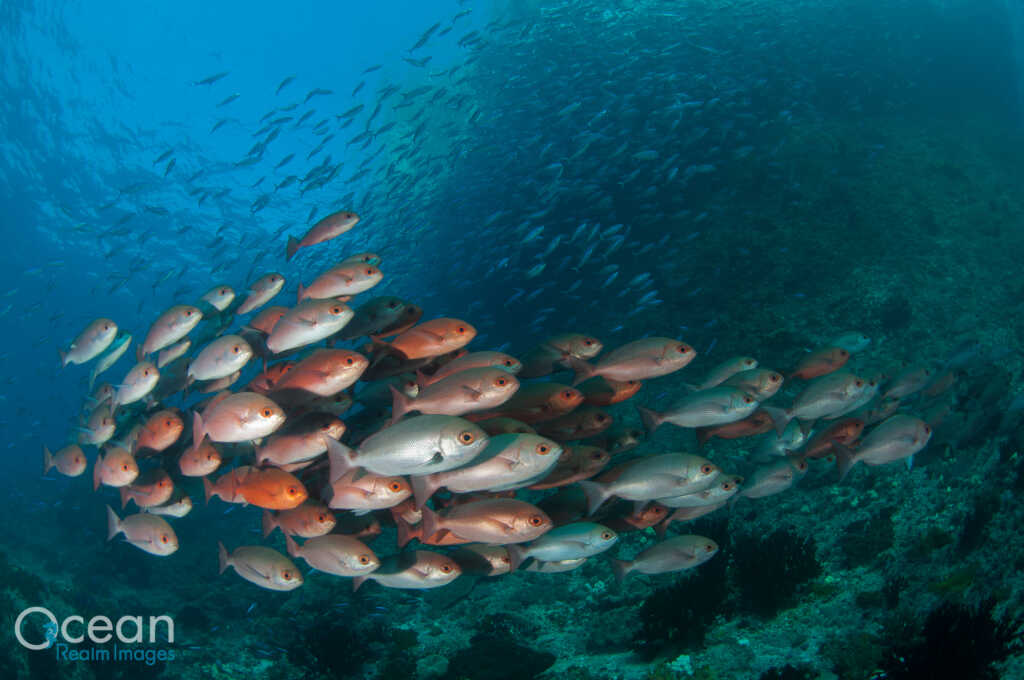 “Europeans first explored Raja Ampat, or “Four Kings,” in the 1800s. It is in this region that Sir Alfred Russel Wallace spent time in the region collecting bird skins he could sell to fund his research expedition. Scientists of Wallace’s era were preoccupied with species distributions on land and largely ignored the oceans. However, in the early to mid-1800s when Europeans, including Wallace, were exploring Bird’s Head, they noted and named many common reef fishes including widespread Indo-Pacific species such as bluefin trevally, blacktip reef sharks, and semicircular angelfish. After this initial flurry of activity, the outside world largely forgot the peninsula. This twist of fate was probably its saving grace. When modern scientists began to explore the area centuries later, they found a wilderness full of rich, pristine reefs and previously unknown species.” 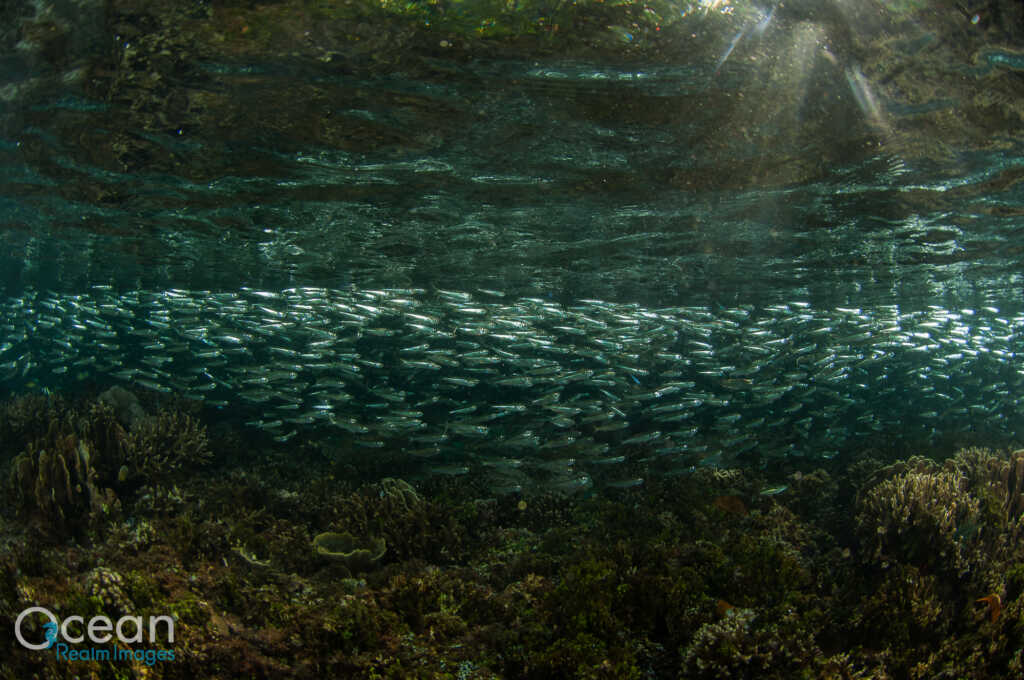 Toward the end of the year baitfish “bloom” in Raja Ampat, creating a bounty for predators 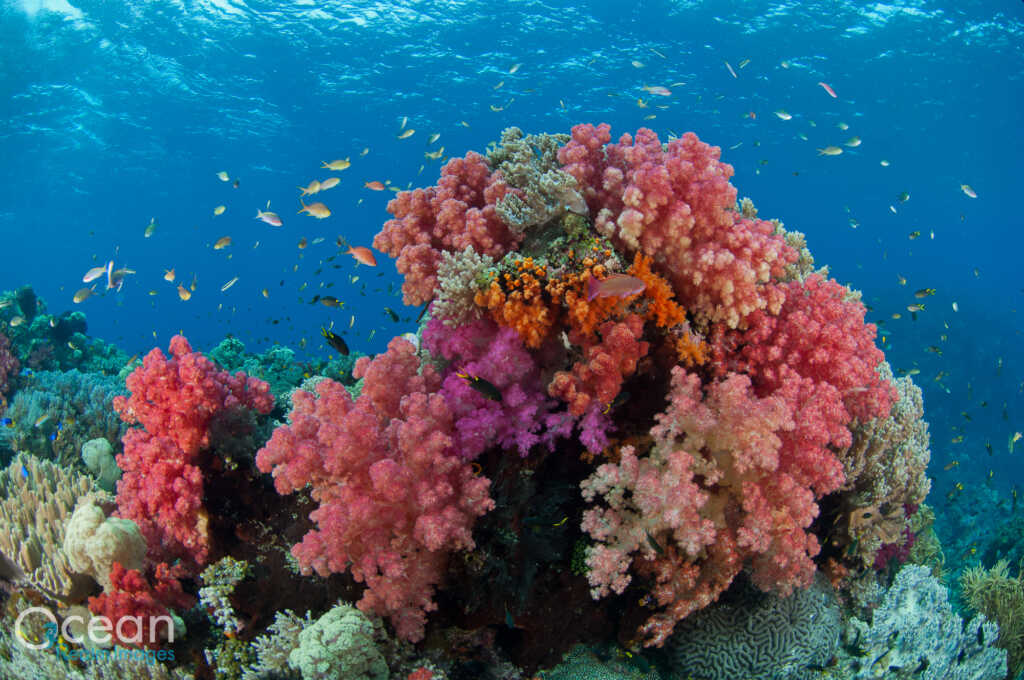 “One of my favorite places in the world to dive is Raja Ampat. Here, every single inch of the reef is covered in growth of some sort, and the growth continues to within inches of the water’s surface. I spent an entire two-week dive trip exploring these islands without straying thirty feet below the surface—pretty unusual, given that a recreational dive certification allows you to dive to one hundred feet. The shallows of Raja Ampat, which means “Four Kings” in Indonesian and refers to the four large islands that comprise the area, are full of hard coral growth, as well as the growth of various sessile invertebrates. 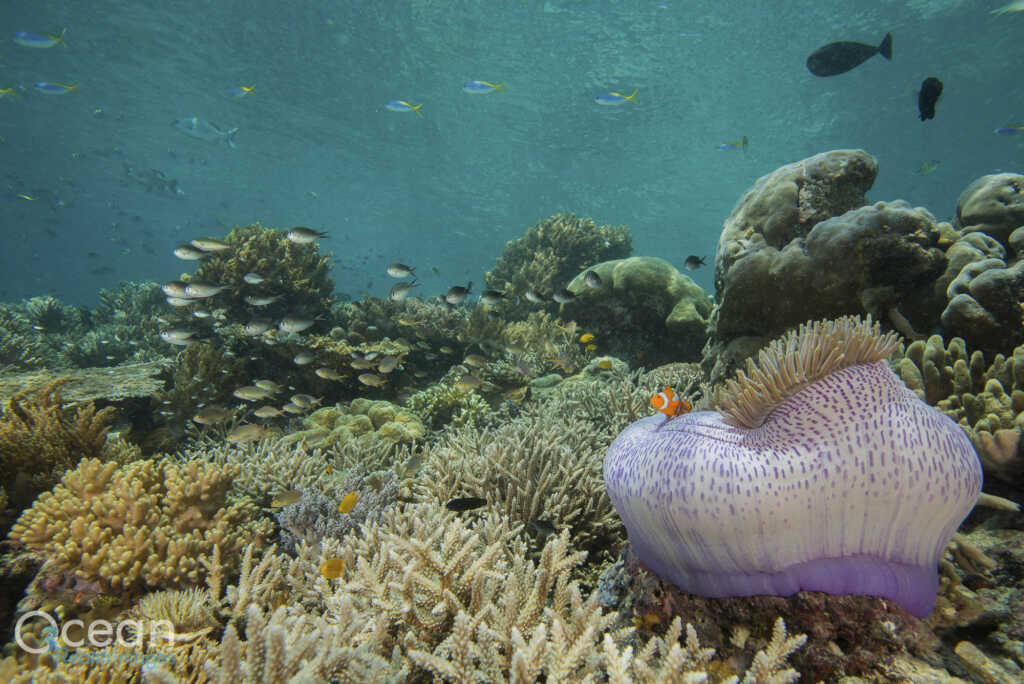 Most of these islands were produced by ancient coral reefs; overtime, ocean erosion has whittled away at their bases, leaving the islands with mushroom-like geographical forms. This erosion is so extreme that in some places, the coastline of the islands is undercut by fifteen feet or more. Underneath the mushroom-like overhangs, light cannot reach the substrate, the hard base on which organisms live, so light-loving corals aren’t able to grow. In their place, the corals that would ordinarily only be found in deeper water appear in three-feet-deep water. Multihued sponges, gorgonian sea fans, soft corals, whip corals, and black corals cover the rock, while the waves bubble under the overhang above.” 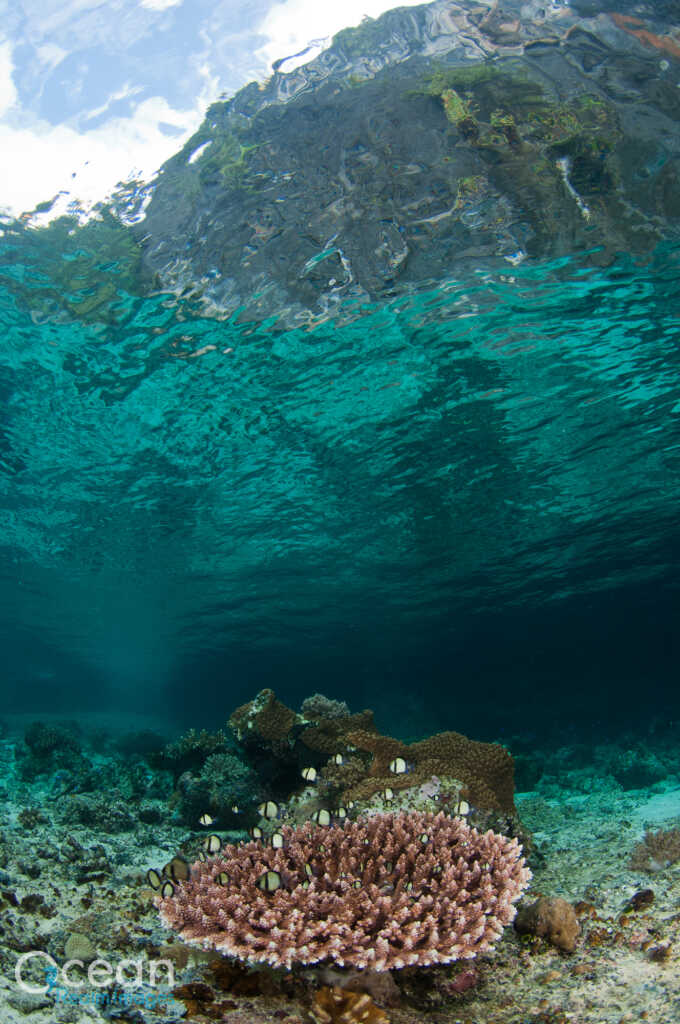 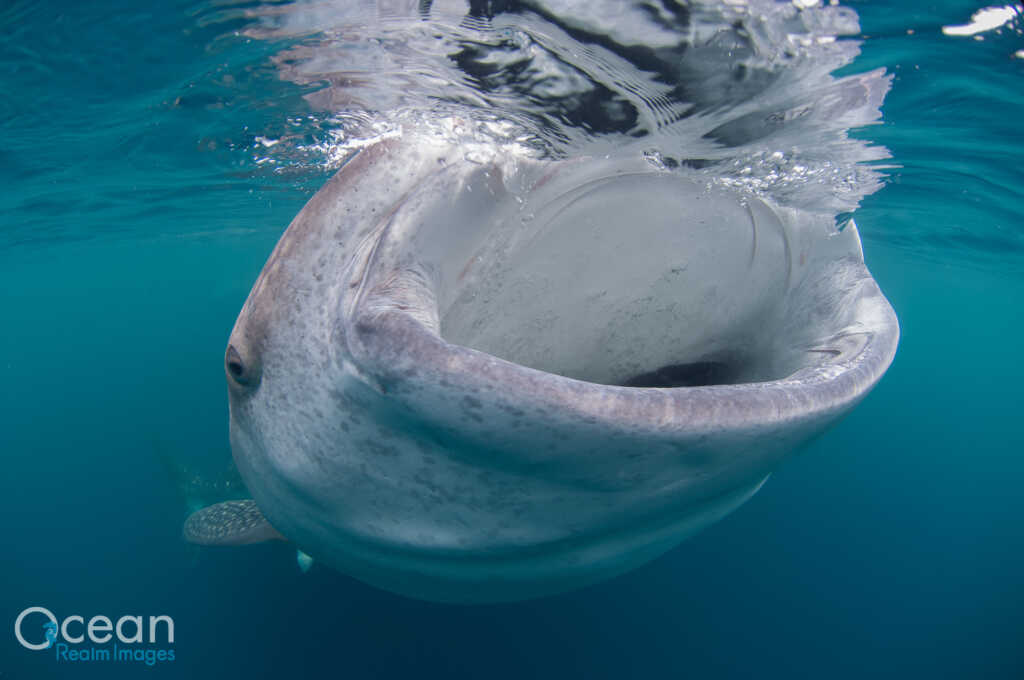 “Diving in Cenderawasih Bay is a strange experience. While the reefs are ostensibly the same as many in Raja Ampat to the west, the inhabitants are largely alien. Bright blue and white Price’s damselfish, pink and yellow Caitlin’s dottybacks, and beige and yellow Maurine’s demoiselles are all ubiquitous but found nowhere else on Earth. Farther down the reef slope, the stunning Cenderawasih Fairy Wrasse inhabits rich coral areas at sixty feet. 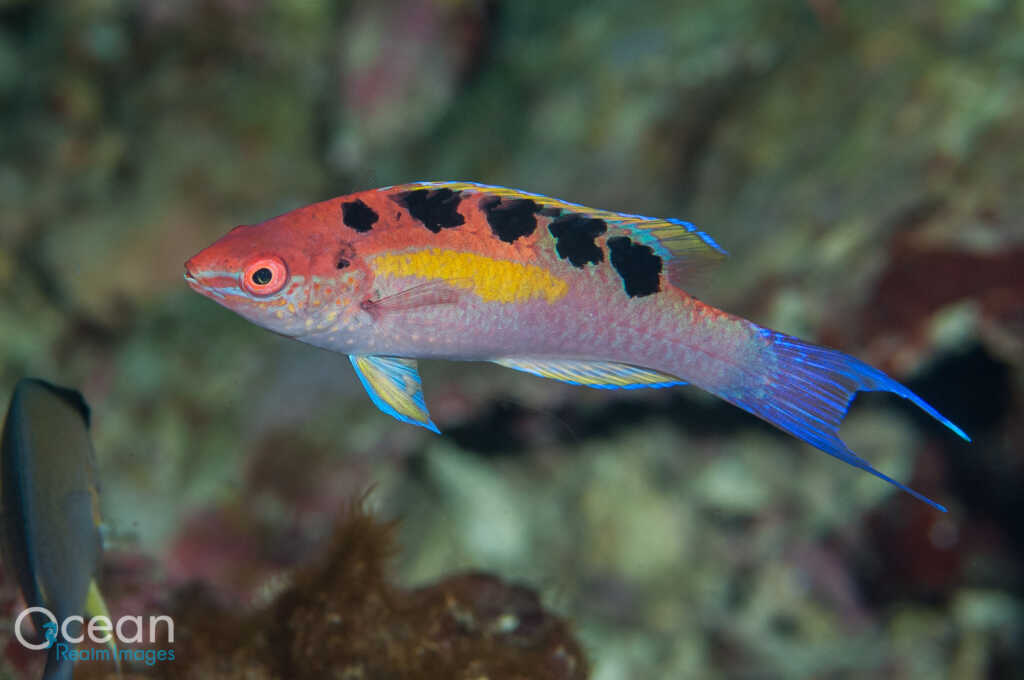 The shocking yellow streak and black blotches on the male’s side allow divers to spot the beauties from a fair distance away. What is most amazing is that these fishes remained in obscurity until 2006 when scientists first explored the bay. Previously, none of these fishes were known to western science. There are at least fourteen species of reef fishes known only from the bay, which is many more that you would expect from such a small area, with many surer to join them as it is explored further.” 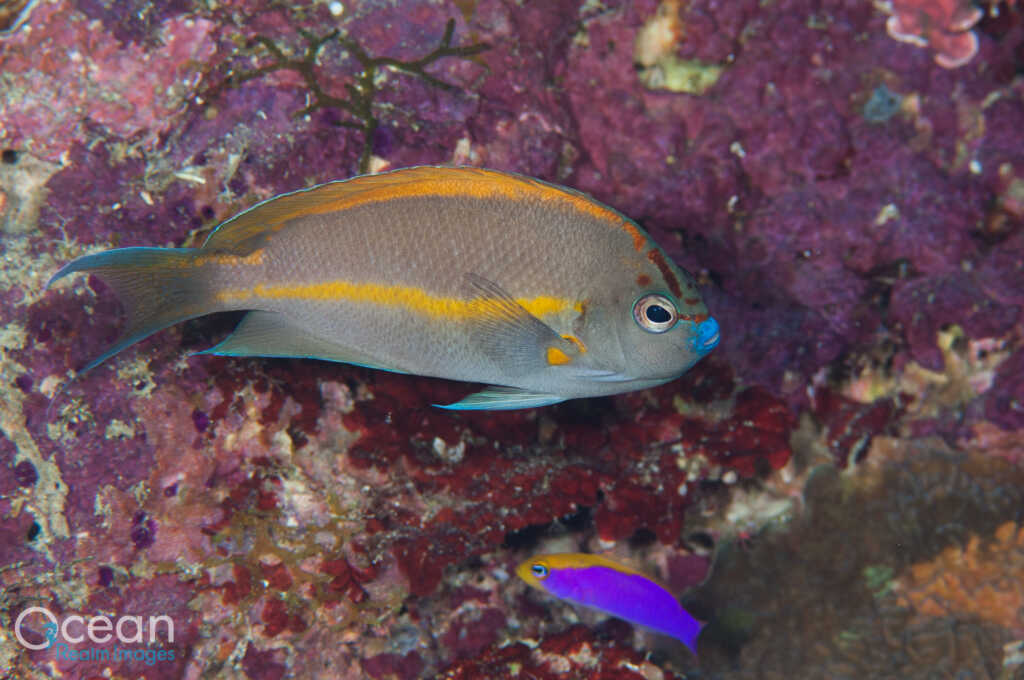 Oranate Angelfish (Genicanthus bellus)-male. Normally a deep water species and seldom seen by recreational divers but in Cenderawasih it can be found quite shallow. Note: w/ an endemic Cenderawasih Dottyback (Pictichromis caitinae) below. 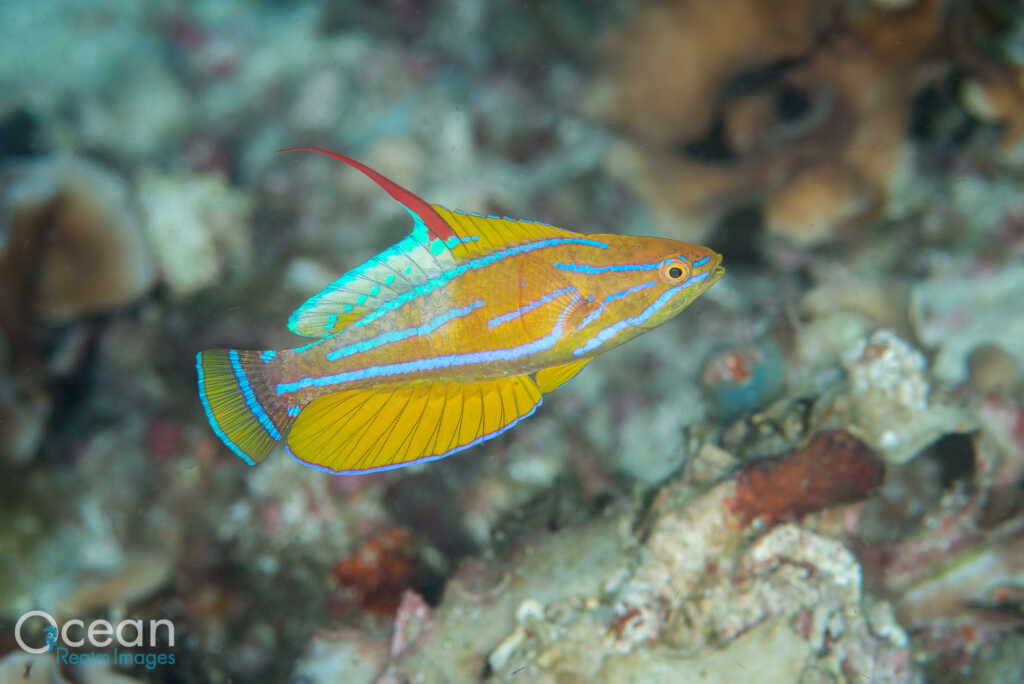 “Probably the most full-on displays that I have witnessed were at an aptly named site called Flasher Beach in Triton Bay on the southern coast of West Papua. There, mixed clouds of three Indonesian endemic species—blue, Nursalim, and yellowfin flashers—all vie for female attention. 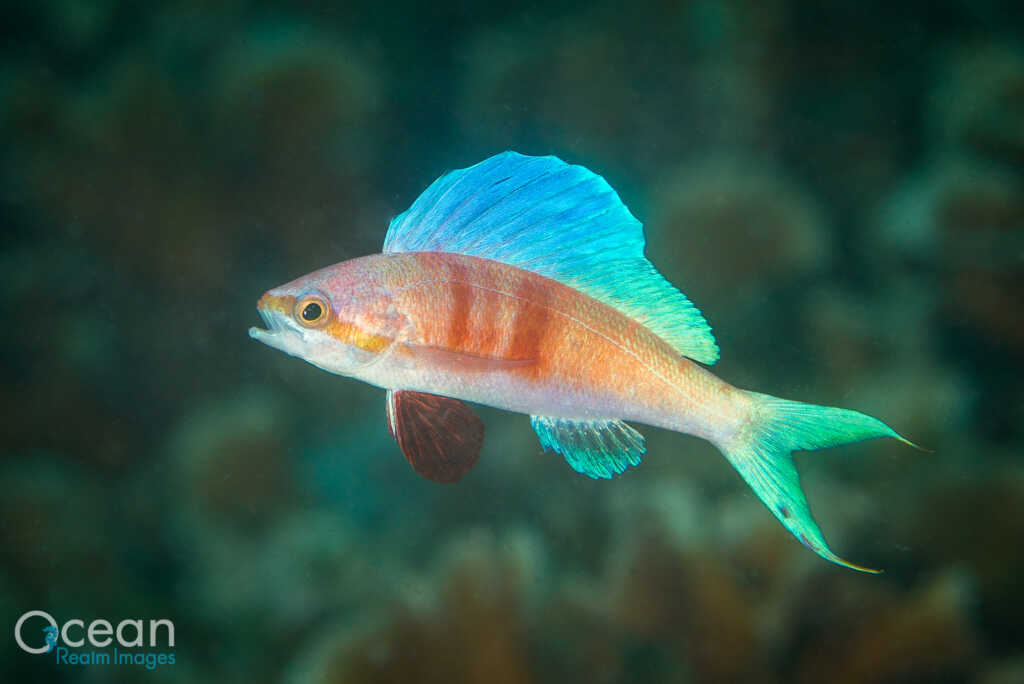 As if this wasn’t enough of a macho display, there were also male sailfin anthias displaying there too. It was a sexual frenzy, this mélange of hundreds of fishes. The flashers all had their colors dialed up to full intensity and the male anthias had erected their huge sail-like dorsal fins and flashed them from red to pure white.” 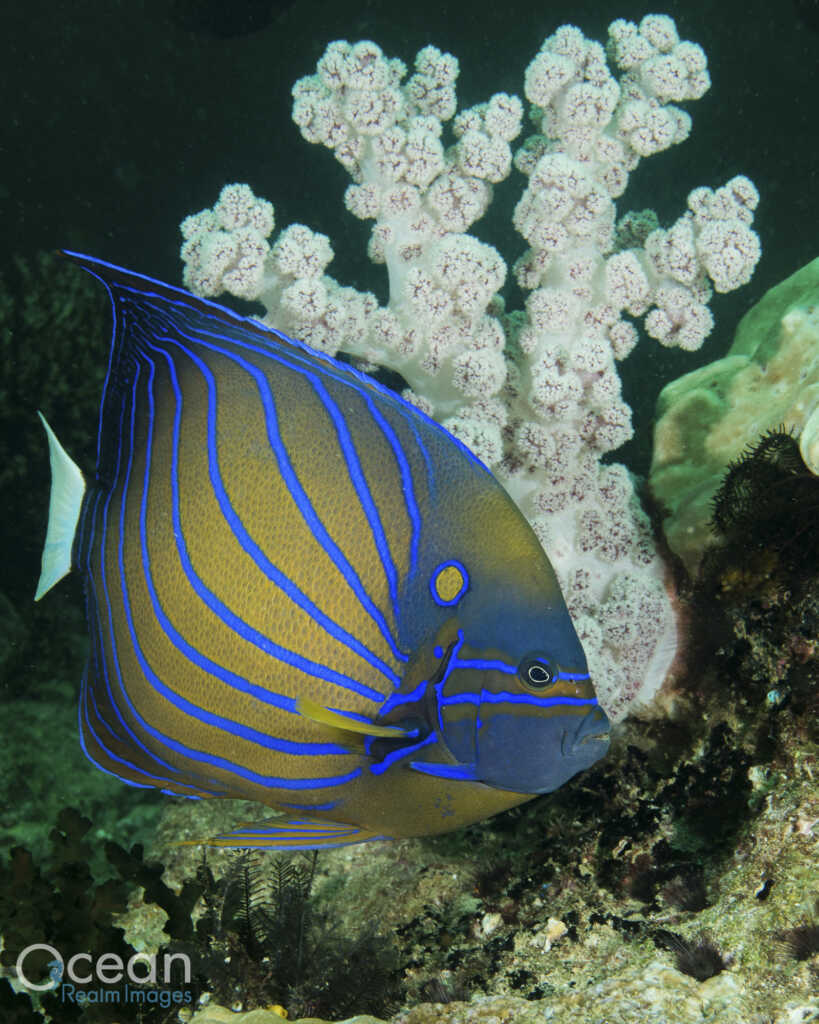 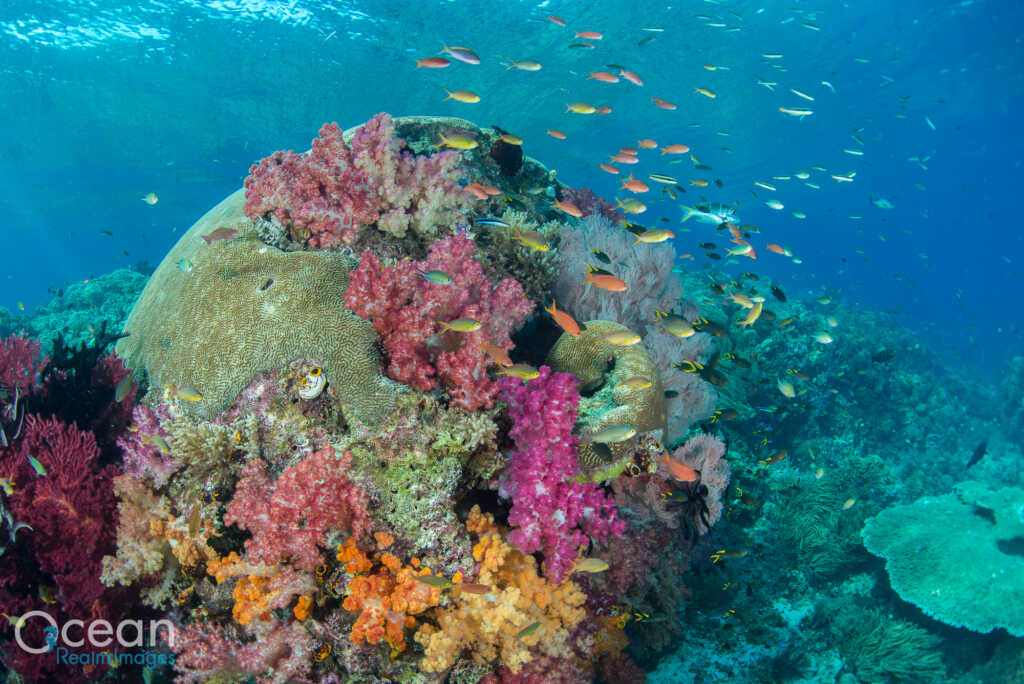 “I have made some of my most unexpected discoveries and observations in the Bird’s Head region and experienced the bounty of the coral reef in its full splendor. I have been surrounded by such thick schools of fishes that I could not even glimpse my dive buddy a few feet away. 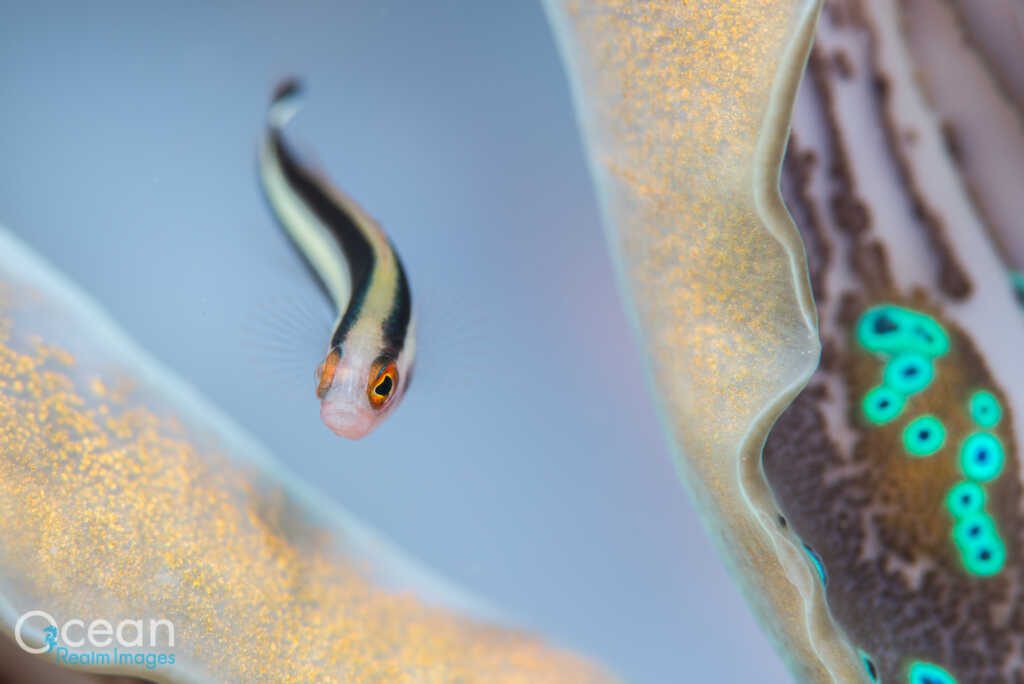 I have seen the biggest fish in the sea, the enormous whale shark, in both Cenderawasih and Triton Bays and one of the world’s smallest fishes, Satomi’s pygmy seahorse, in Raja Ampat. This truly is a special corner of the world.” 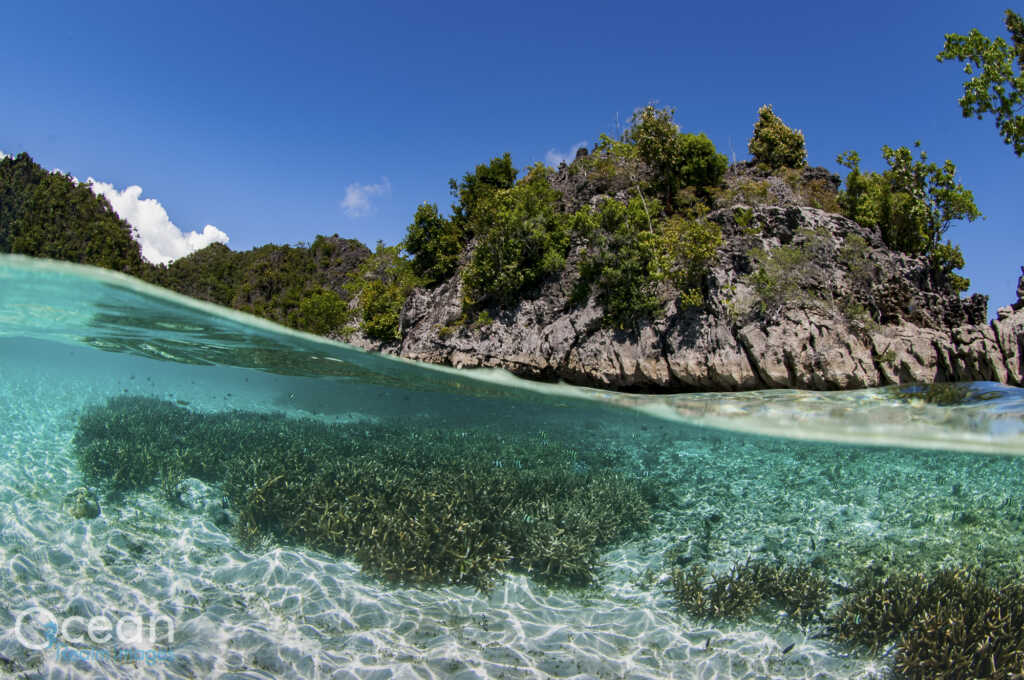 Dr. Richard Smith is a marine biologist and conservationist, an award-winning underwater photographer and videographer, a public speaker, and the leader of diving expeditions around theworld; he’s been on more than thirty-five hundred dives since 1996. Dr. Smith has written hundreds of articles, published internationally, with a primary focus on conservation, marine life, and travel. His photographs have also been featured around the world, including on dozens of magazine covers and in exhibitions, and he’s won several awards for them.  To learn more about Richard’s work visit his website, Ocean Realm Images. 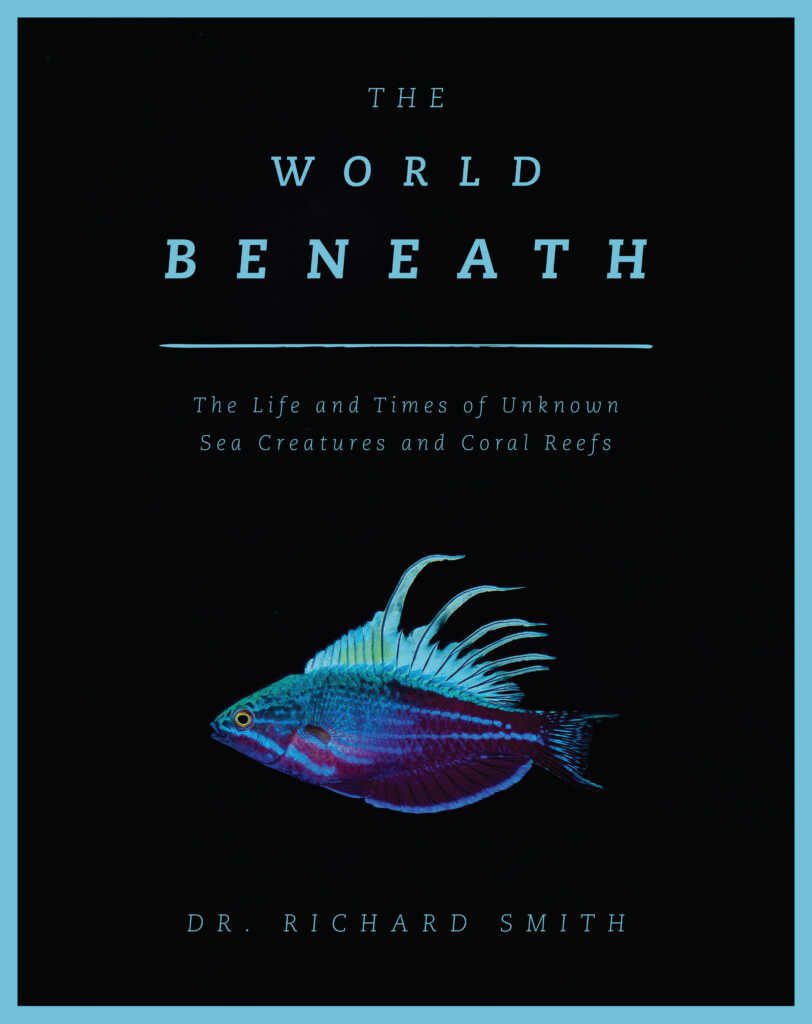