A Shimmering Mass by Alex Lindbloom 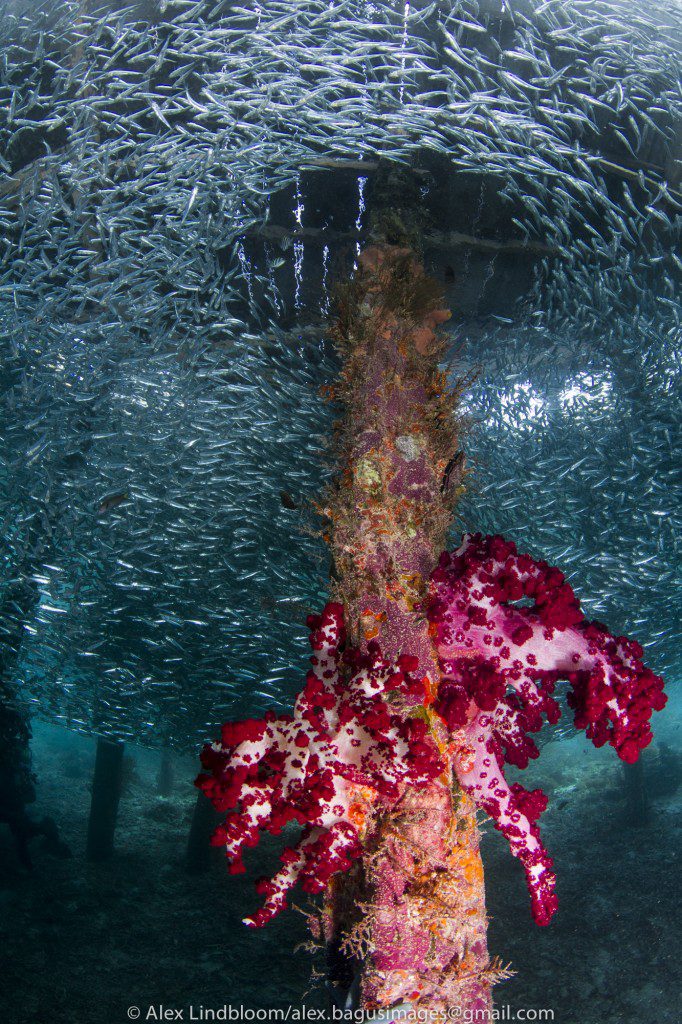 Recently I had one of the most memorable dives of my life at Raja Ampat’s Arborek Jetty. This is not my first time sharing a story from Arborek Island’s small jetty, which is one of the most unpredictable and diverse places I’ve ever dived. (Alex’s previous Arborek blog) Every descent at Arborek’s jetty brings a completely different experience. The weeks previous to this dive, it was all about the yin and yang of passing reef mantas and the abundant rare, but small, reef critters. This week, it was all about the shoals of Ox-Eye Scads and swells of Silversides. 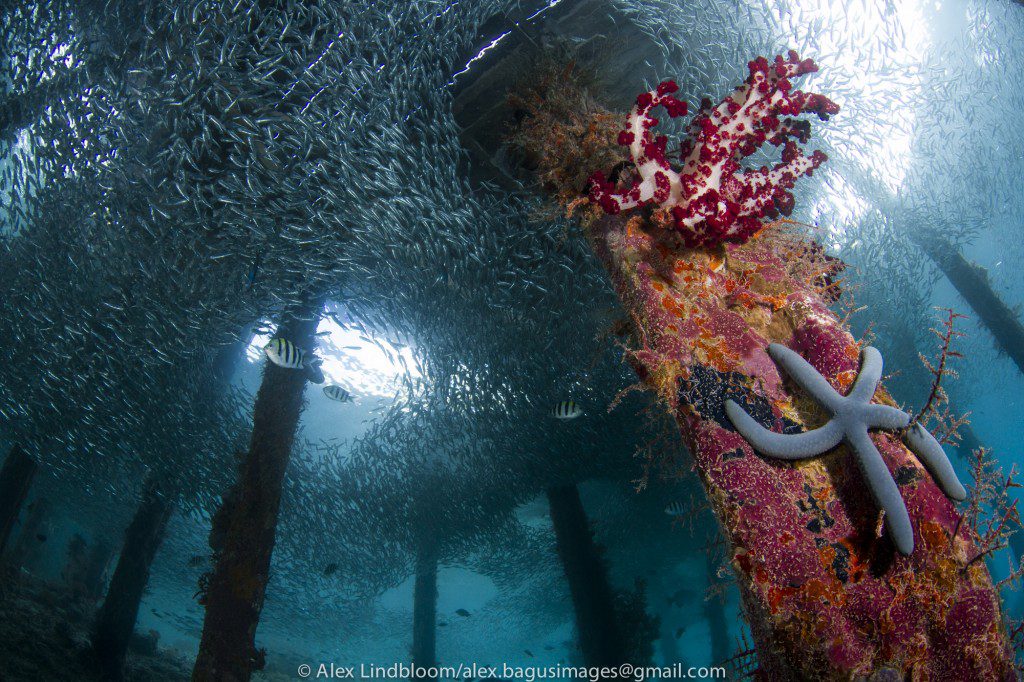 Silversides cloud the surface at the jetty

As the dingy bobbed about just off the jetty, and while the divemaster counted down from three for the back-roll entry, you could see there was something big down there. The surface was bubbling from rapid movement and the area below us had gone dark. What had disturbed the water and turned it olive green were two of the biggest schools of fish I had ever seen. Directly below the jetty’s wooden planks and uniformly circling the soft coral encrusted pilings was an immense shoal of Silversides. They moved in unison forming perfect swirling rings around the bubbles, lion fish, and the vertical wood pilings as if these objects were the center of multi-lane traffic circles. Just beyond the jetty were the Scads. They formed a homogeneous, shape shifting collective of fish like I’ve never seen. The school stretched the entire length of the jetty, occasionally and suddenly, compacting into a mass stretching from the sea floor, twelve meters down, to the surface. They had little care for the bubbling divers taking turns swimming into their masses completely enveloping themselves in the colossal school. 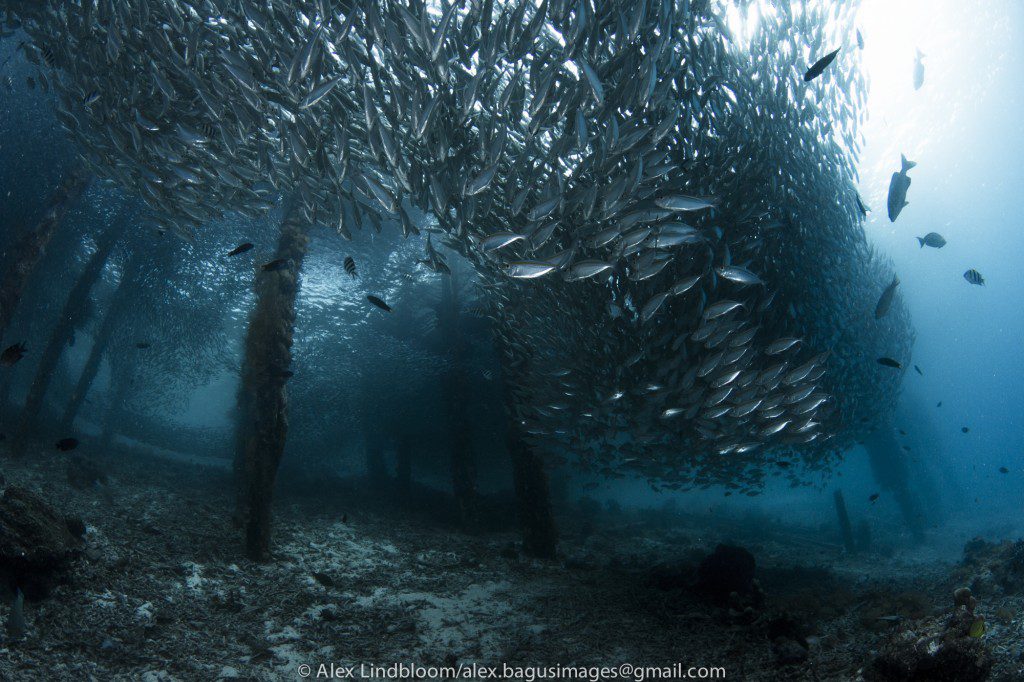 I suppose I shouldn’t be surprised by the experience considering Raja Ampat’s reputation for incredible diving. This is my second full season diving in Raja Ampat and every liveaboard trip I do continues to yield unforgettable, once in a lifetime dives. It’s just such an out of this world experience to not only be breathing underwater but to be inside such a massive congregation of marine life. For me, no matter how frequently dives are like this, I will never be able to think of them as just an every day event; like a beautiful sunny day after a cloudy spell. 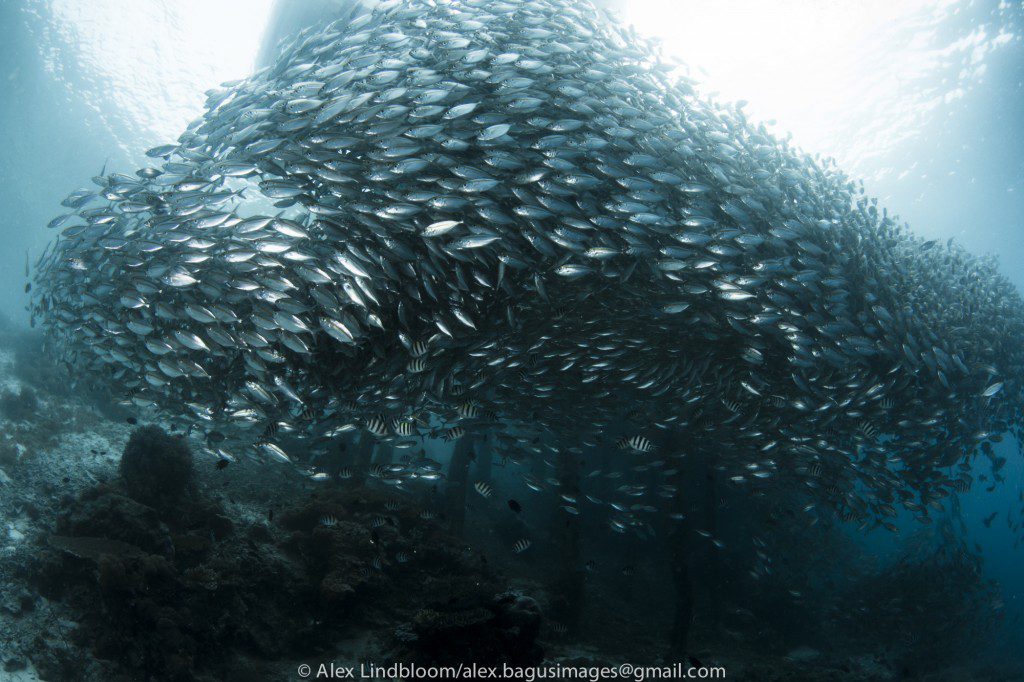