Most newly-discovered species are easy to classify. They have features that are very consistent with well-known organisms and they fit neatly into one category or another.
Every so often, one comes along that leaves scientists wondering, “What the hell is this thing?”
Case in point: Dendrogramma. This new genus represents two species of deep-sea animals that resemble mushrooms
but don’t really fit in with any other known animals. As a result, this organism could bring fairly large changes to the phylogenetic tree.
The research was conducted by a team of researchers from the University of Copenhagen and the paper was published in PLOS ONE.

The 18 specimens were caught during an expedition in the Bass Strait, between Australia and Tasmania back in 1986.
Two samples were dredged up from depths of 400 and 1000 meters.The samples had been fixed and preserved, rendering them unable to undergo genetic analysis.
However, the preservation process was not done particularly well, causing them to become bleached and shrunken. They turned brittle over time. 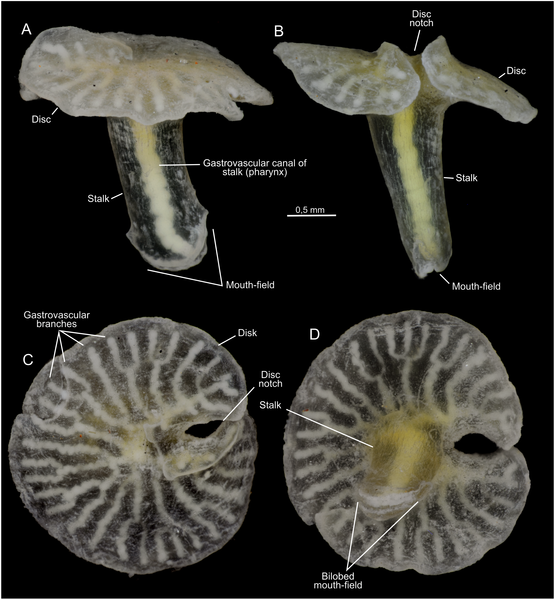 A and B are lateral views, C is an aboral view, D is an adoral view. Image credit: Just et al.

They have a flat portion of the body that resembles the cap of a mushroom, though it is only approximately 1 centimeter wide.
This portion also contains digestive tubes that are reminiscent of a mushroom’s gills. Measurements were made before shrinkage had set in.
The end of the 2-cm-long stalk (stem) has an orifice that is likely used for both eating and excretion.

These unique organisms were initially thought to belong to the phylum Cnidaria, which contains true jellyfish, coral, and anemones.
While there are some anatomical characteristics that are similar to jellyfish, they don’t possess any ability to sting.
They share certain characteristics with the phylum Ctenophora, which contains comb jellies, but it also isn’t a perfect fit.
It is very possible that Dendrogramma belongs to an entirely distinct phylum, which would cause a major re-write of the phylogenetic tree.

Dendrogramma looks most similar to fossilized animals from the Ediacaran period, approximately 635 to 542 million years ago.
Though its origins are somewhat muddled, it cannot be entirely ruled out that it did descend from an ancient organism from that time and is a living fossil that has defied exceptional odds to survive to this day. 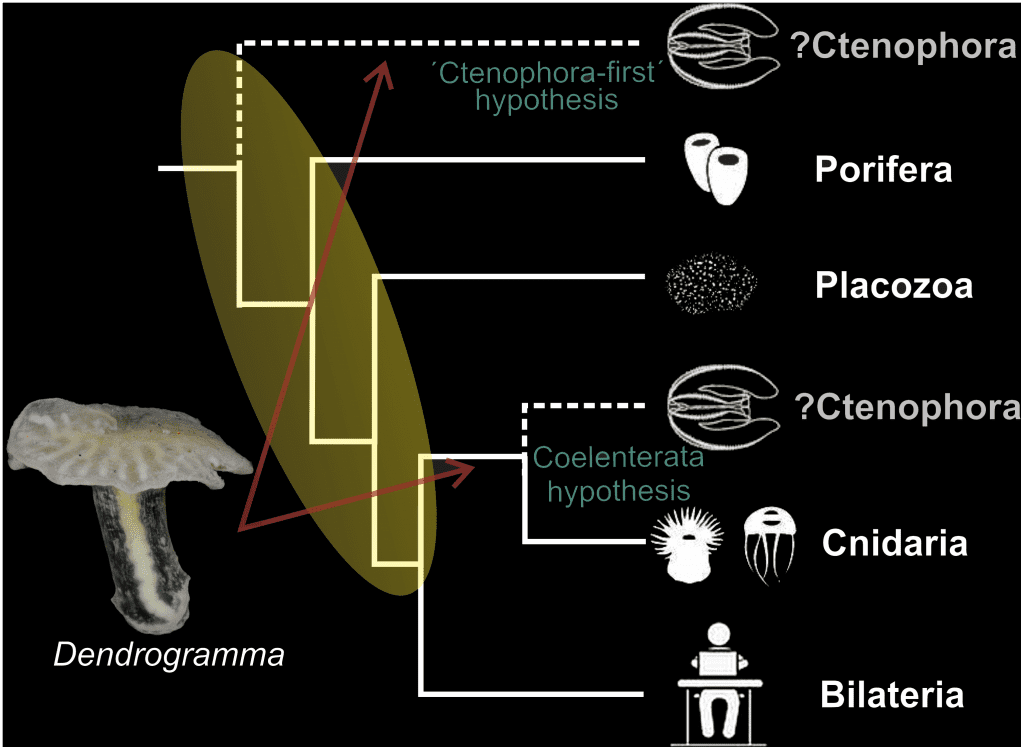