A type of shark that has long captivated scientists and divers for its preferred mode of underwater travel — walking — just got even more interesting.

Researchers have found that walking sharks are collectively the “youngest” — as in, the most recently evolved — sharks to ever walk (or swim) the planet.

Conservation News spoke with one of the authors of a new study on walking sharks, Conservation International’s Mark Erdmann, to find out how he and his team uncovered the evolutionary origin of walking sharks — and how this information could help us adapt to climate change.

Question: Why are they called walking sharks?

Instead of swimming around, these little bottom-dwelling sharks actually “walk” using their pectoral and pelvic fins, which makes it easier for them to poke their heads under coral and rocks as they look for small fish, snails and crustaceans to eat.

In 2006, we discovered two new species of walking sharks in the Bird’s Head Seascape of West Papua, Indonesia. Since then, we have done loads of research to learn more about these mysterious creatures: why do they walk? How did they evolve? What can their unique traits teach us?

Working with the world’s foremost shark geneticists from the University of Queensland, the Indonesian Institute of Sciences, the Australian Commonwealth Scientific and Industrial Research Organization (CSIRO) and the University of Florida, we set out to determine when these curious little critters evolved from their shark ancestors by using a technique called “dated molecular clock methodology.” This uses genetic samples from shark fin clippings — just like nail clippings for humans — to compare the mutations in each shark species to estimate the date when each branched off into a new species. Sharks as a group have actually been around for about 400 million years, predating the dinosaurs by 200 million years.

Amazingly, we discovered that walking sharks evolved just 9 million years ago, making them the “youngest” sharks on our planet. 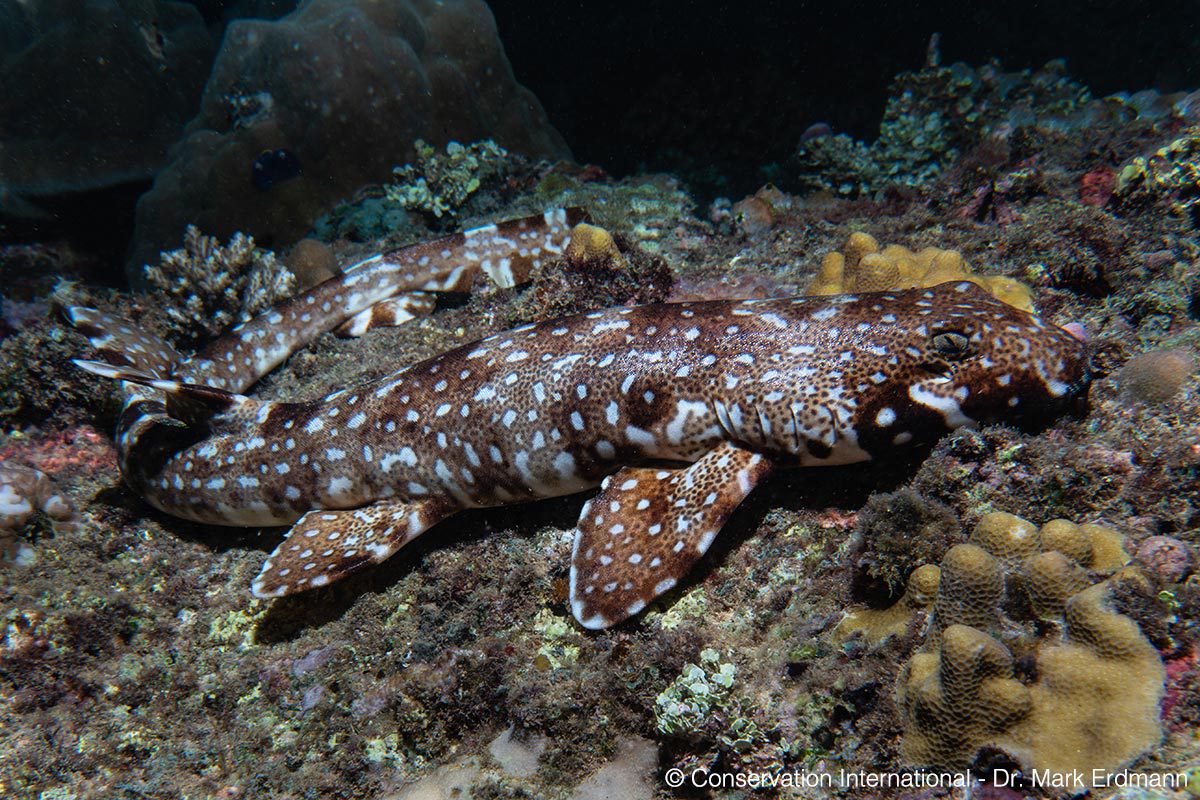 Q: What else did this “molecular clock” show you?

Back in 2016, we reported that the nine known species of walking shark are found exclusively in a ring around Northern Australia, New Guinea and the satellite islands of Raja Ampat, Aru and Halmahera in Indonesia.

Using this clock, we set out to learn how the walking sharks separated into so many distinct species — a process known as speciation. Speciation typically happens when individuals of a given species get separated from their main population — sometimes by walking or swimming or being carried away on a current to an isolated place. If they are lucky enough to survive and breed, eventually evolution will take this new population in a different direction and often leads to a new species.

For a shark that isn’t able to swim far and doesn’t move much, we wondered how that separation could possibly be the case.

The name of the paper — “Walking, swimming or hitching a ride” — actually reveals our three main hypotheses to answer this puzzling mystery. For most of the walking shark species, our findings support the idea that speciation occurred because the populations slowly expanded their range by walking or swimming, then some individuals eventually became isolated by environmental factors such as sea level rise or the formation of large river systems that broke up their habitats.

For the four walking shark species found at the Bird’s Head Seascape, we suspect that they actually hitched a ride — on a drifting island.

Q: They hitched a ride on an island?

Indeed. We’ve found that most walking sharks spend their entire lives on the same reef they where they hatched — never really moving more than a mile out of this radius. The only way they can get across deep water or move a significant distance would be if they are on a reef that is moving due to tectonic plates shifting.

By analyzing sea-level rise and tectonic shifts over the past 50 million years, we know that island fragments around Australia and Southeast Asia have been constantly spinning, splitting apart and smashing against each other — it’s basically an island disco.

We also know that beginning around 10 million years ago, one particular set of island fragments moved northwest from southeastern New Guinea along the coast of the island, until it eventually joined together to form the modern-day Halmahera Island. These islands potentially transported walking sharks from southeastern New Guinea all the way to the Bird’s Head Seascape in Indonesia, where they likely radiated into the four species we can now find in West Papua.

Although these walking sharks may have used an “island ferry” to move around 1,600 km (1,000 miles), the home range of where each species lives on the reef remains small. The downside to this is that species with smaller habitats are inherently at a higher risk of extinction — a tsunami or volcanic explosion could wipe out half the population in one fell swoop. 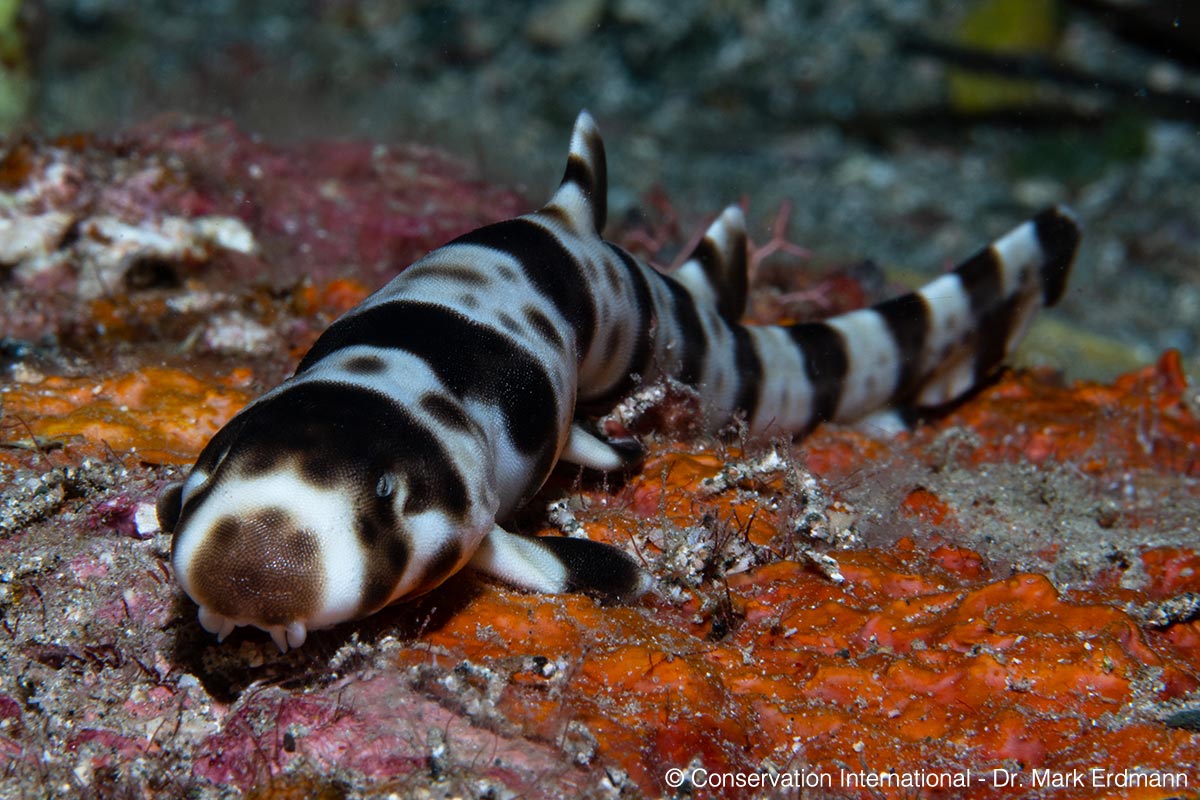 Q: How secure are these sharks, then?

Walking sharks are actually very robust and can survive in extremely hot environments with little oxygen — they can even walk on land for a bit!

But as climate change accelerates, the real concern is for their habitats. Hotter ocean temperatures are killing the coral and seagrass that many marine species and crustaceans rely on — including walking sharks’ primary sources of food. On top of this, sediment from unsustainable coastal development projects is leaking into these reefs, creating an environment that is unsuitable for walking sharks and other fish.

Another potential issue facing these charismatic creatures is the ornamental fish trade. Walking sharks have now become major targets for capture and display by both large public aquariums and private collectors, and we are concerned that this unregulated trade may be unsustainable.

Q: Can walking sharks be protected from these threats?

Fortunately, many of the walking sharks are already at least partly protected by regional marine protected areas (MPAs) — areas of the ocean where human activity is restricted, preventing overfishing and keeping the waters healthy. The Bird’s Head Seascape marine protected area network, for instance, covers habitat occupied by three of the walking shark species, with one of these (Hemiscyllium freycineti) completely protected by the Raja Ampat Shark and Ray Sanctuary. The massive scale of these MPAs are critical for protecting this species — and the rest of the marine life and coral living within the ecosystem.

Our goal, however, is to make sure all walking shark species are protected. The best way to do this is for the Indonesian government to grant full legal protection status to walking sharks across the entire country. Similar to whale sharks and manta rays — which both now have full protected species status in Indonesia— walking sharks are clearly more valuable to the national economy alive rather than dead due to their strong appeal in the ecotourism industry.

Q: Is there another mystery about walking sharks you hope to solve?

From a scientific perspective, there is still so much to learn from walking sharks. We know that the world’s species that exist today are basically the existing “genetic reservoir” (raw genetic material) we have to adapt to global changes. We also know that walking sharks are very resilient to warm water and that they have a tolerance for oxygen deprivation. Any time you have an animal or plant that can survive in these extreme conditions, there is typically something unique about their genes — a “special sauce”. Exploring the genetic basis behind these unique traits in walking sharks could give us invaluable knowledge as we try to adapt to the impacts of climate change.