West Waigeo: Place of Refuge (for Mantas)? by Rafid Shidqi

Administrator’s note: This is Rafid’s third post.  He is a newly “minted” conservationist from Java and recently became the newest member of the Indonesia Manta Project in Raja Ampat.  In his role as Raja Ampat Field Officer he is involved in conducting photo ID research on Raja Ampat’s manta rays, studying their population status and vulnerability. He also is involved in facilitating “Kader Manta”, a group of local youth employed to work in manta conservation.  His work involves providing these youth with basic english and presentation skills, as well as manta ray ecology and conservation.  He’s young, social media savvy, and very keen to make a difference in BHS conservation.  Here he shares a bit of his life with us.

The windy season is over, I guess. At least that’s what people at Arborek told me during my stay, and when they saw me and Ronald frequently out checking for mantas. It supposed to be a horrific time during June-July.  The people usually call it “south season”.

“The sea is white, Rafid. I never want to go outside the reef if the ‘south season’ is up.” That’s what Mama Anggi told me. It was true, actually. During my stay at Meoskor, the weather could be extremely bad. For example, the trees couldn’t stand still, more like a twister was out there, but thankfully it happened mostly during the night, strengthening the reason why I have to pull my blanket even higher. Then when the sun rises, the weather starts to be so nice, sometimes with a bit drizzle. But interestingly, we still saw manta rays breaching during that time at Meoskor. Wow!

At Arborek, it’s not much different. I don’t know how the climate works on small islands, because I think the period of rain and sun randomly change. The sun can be very harsh, hot and dry and, during the evening. the rain can pour down very hard. ‘South season’, they said. But thankfully the season is still friendly enough for some manta surveys.

Eat What is Available 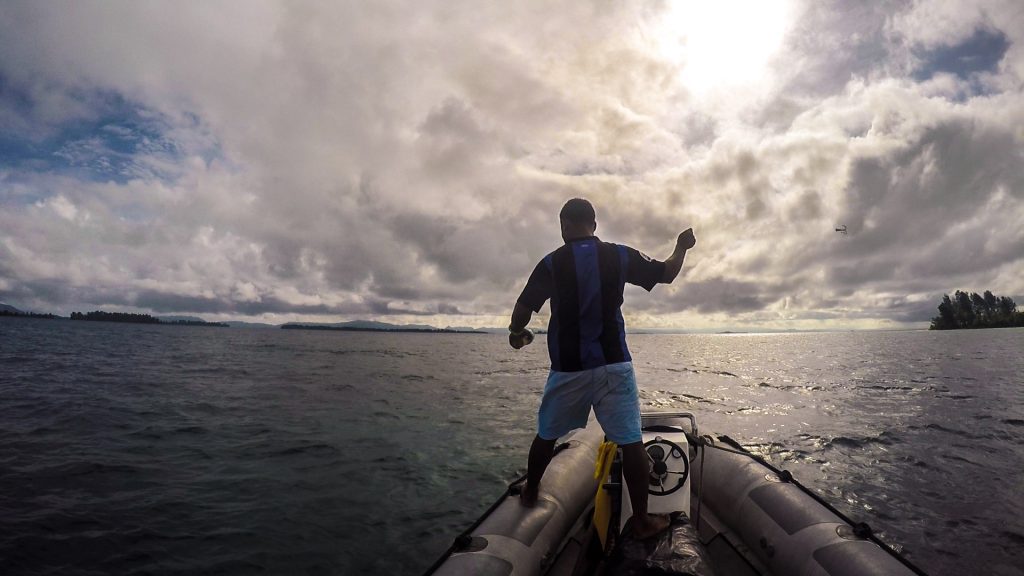 We started to set up the survey schedule, including targeting some islands around West Waigeo as the focus of our next survey. We usually start the survey early in the morning, like 5:30am. When the sky is still dark, Ronald starts to warm the engine of our skiff “ESTE”, while I’m preparing the cameras and all the tools for surveying.

Is it really necessary to go that early? Honestly, no. Since Ronald’s wife is away, both of us are struggling with cooking and looking for provisions. We did buy some supplies, but often they are not enough, since the vegetables rot in only 3 days, and we couldn’t store any sausages, or other perishables due to no refrigerator being available. But living in the village is very handy, and I get used to “eat anything that’s available”. If there’s a fish that day, we can eat that. If there’s only noodles, eat that. Only rice?  Well, put on some ketchup, and ask the neighbor for fried fish. 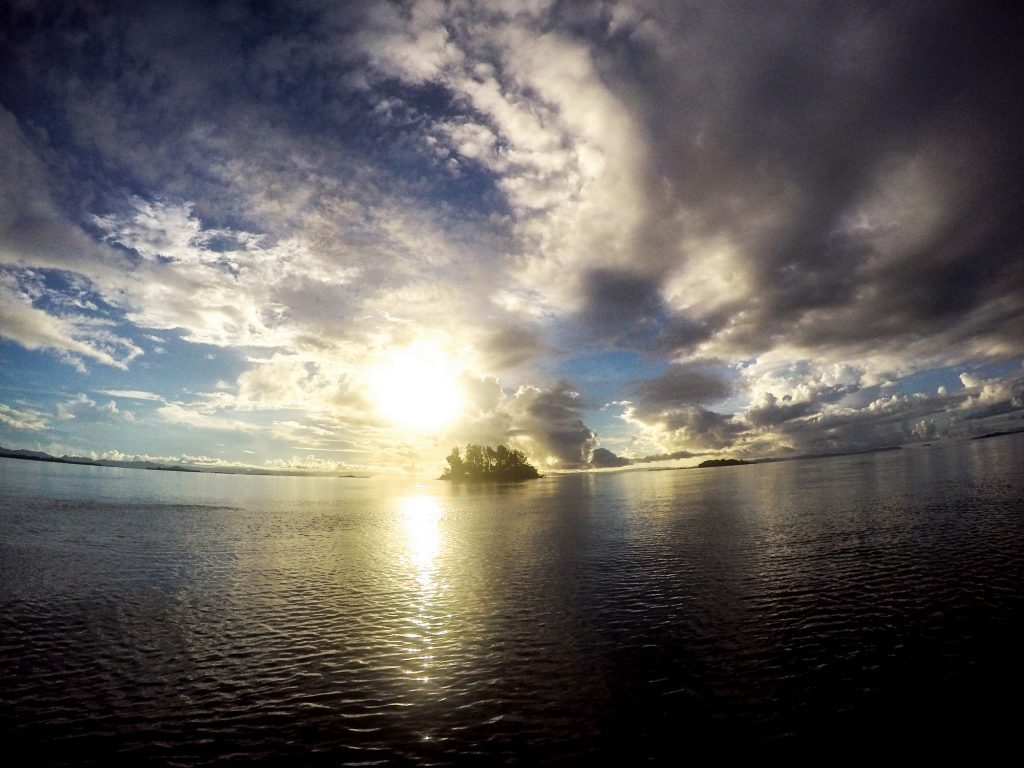 Ronald usually brings some hooks for fishing in the mornings, that’s because skipjacks are really abundant near the area of West Waigeo where we are surveying. The time when the villagers go out fishing is before the sun rises, and before the sun sets.  Skipjack usually feed in huge numbers, and people only need to prepare a hook attached with colorful twine to deceive the fish. Typically they will drive the boat following and circling the area where the skipjacks are feeding. In only a couple of minutes, a skipjack is on the hook! They don’t even need lure. That’s awesome, and the best of all it’s sustainable.

Ronald taught me the way the natives fish that morning.  At first it was hard to roll the nylon strands manually because I was using my bare hands without roller or additional equipment. When the fish is on the hook, I struggled to hold it with my bare hand. I got cut and wounded in my hand many times. But the more I do it, the more I enjoy fishing, “village style”.

That morning we caught almost 10 skipjacks, which was enough for several days and for some neighbors as well. We usually finished fishing around 7 am, when we began our surveying around the islands of West Waigeo. The place we survey is called “Imbraimup” or “Broken Cape”. Near that, there are some scattered small and larger islands, providing a very beautiful scene during sunrise. 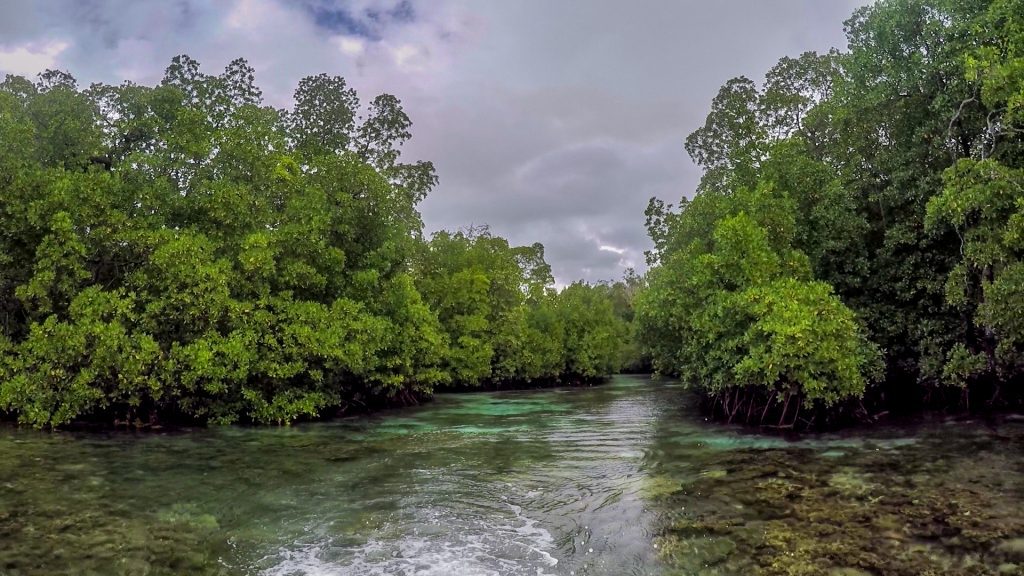 The channel between the “Broken Cape”; pretty nice mangroves around!

The acoustic receivers from Conservation International provides information that manta usually visit these areas, and the peak season for them is during June and July. There weren’t many mantas at Fam, so we moved on to these sites. Trying to prove that acoustic data is correct, but actually it’s more like a detective work!

The place is new for me, so I completely had no idea where to start. We then arrived at a small Island called Jefnabi.  Bering so very small I’m afraid that is likely to sink. Well, during high tide almost half of the Island is covered by the seawater. But the ecosystem surrounding this area is very unique, the corals are dense, with many fish playing on the surface. I often encountered reef sharks once I entered the water. At the edge of the Island, the bottom is very shallow then followed by a slope and patchy reef area that is a bit deeper.

Surprisingly, we started to see fins flapping out off the water, one, then two…then I jumped in. What I saw was amazing, almost 30 manta rays feeding at the same time. The first manta was swimming away, then followed by many others that formed a feeding train. That was the first time I saw this phenomenon. I usually see maximum 5 manta at Fam, but that day at West Waigeo, we saw 30!

I got so very busy choosing which manta that I should collect ID info from first, that I almost forgot that I was free diving. First rule, “don’t forget to breathe!” 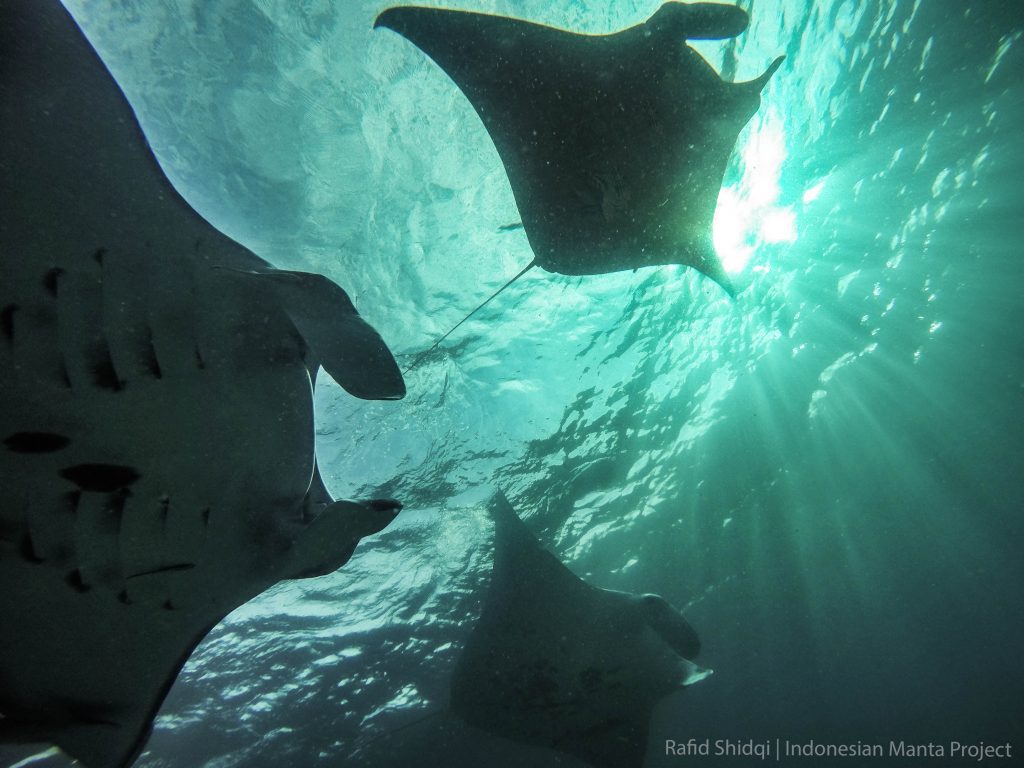 On the surface and I hear Ronald exclaiming there are many other manta rays in different directions. I realize the water to be very productive with lots of jellyfish and planktons, but the thing that surprised me more was that most of the manta rays we encountered were all wounded. The wounds, however, seem to be old and the mantas were beginning to recover. Some had lost their fin tips, some had no cephalic fins (the head fins), another had lost an eye, and others had cracked fins. I was wondering what happened with all the mantas. 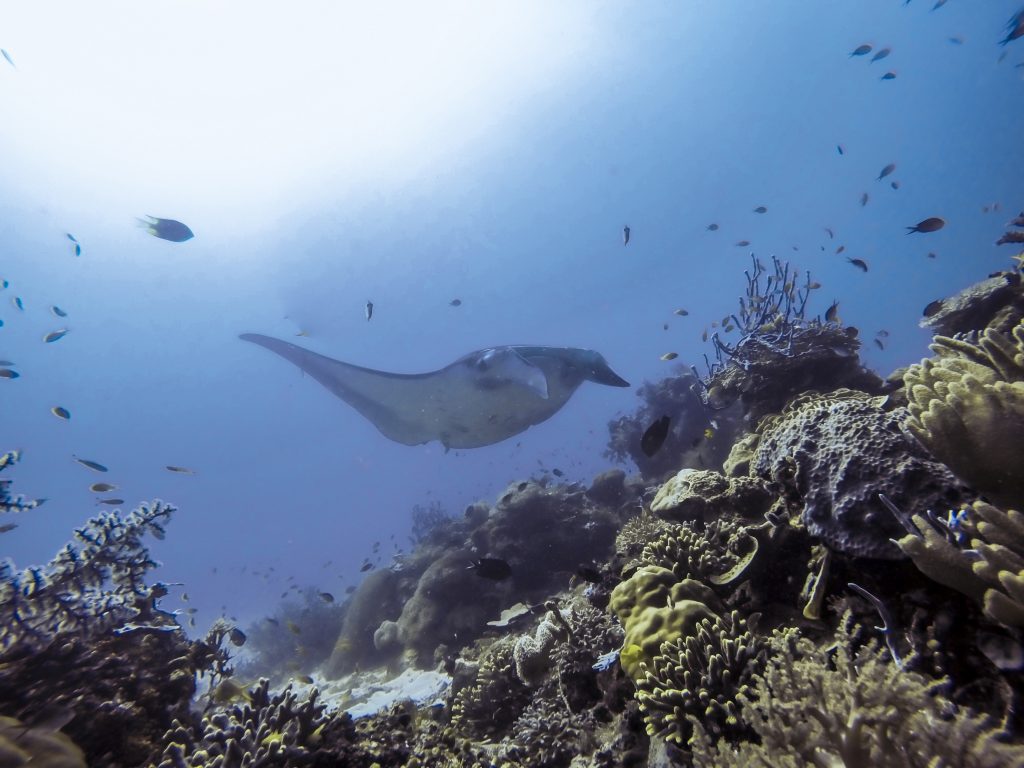 Manta being cleaned, but its lost its tail!

Near the Arborek, there is a very popular (perhaps too popular) site called “Manta Point where tourists often see mantas, but not during June-July. And based on our manta IDs, we could confirm that some of the mantas we saw at West Waigeo are actually some of the ones also sighted around Arborek.  But these wounded.  Could this be the place where they are hiding during this season? A place of refuge from the crowds? Maybe they’re tired of being followed by humans. Maybe. 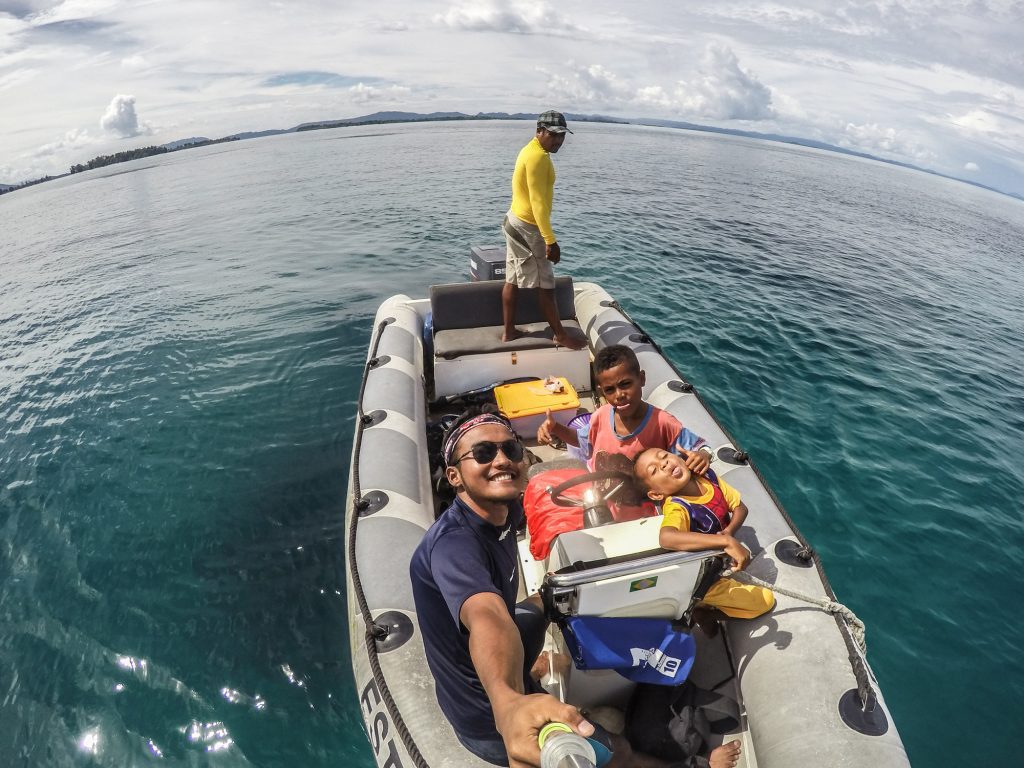 The kids are joining us for our survey aboard the “Este”, our skiff.

We finally landed at the small island to break for some lunch, along with the kids, Ibet and Valen who joined us this time for the survey. Ronald successfully caught some fish for us to eat, and we made a little campfire with only single match and wood we found on the island.  One small long boat, which came from the nearby homestay, then joined us for manta watching. Then we also saw some small long boats fishing with hooks, just few meters from the Island. The area of West Waigeo is part of the National Conservation Territory, and our findings surely open one puzzle about the area. 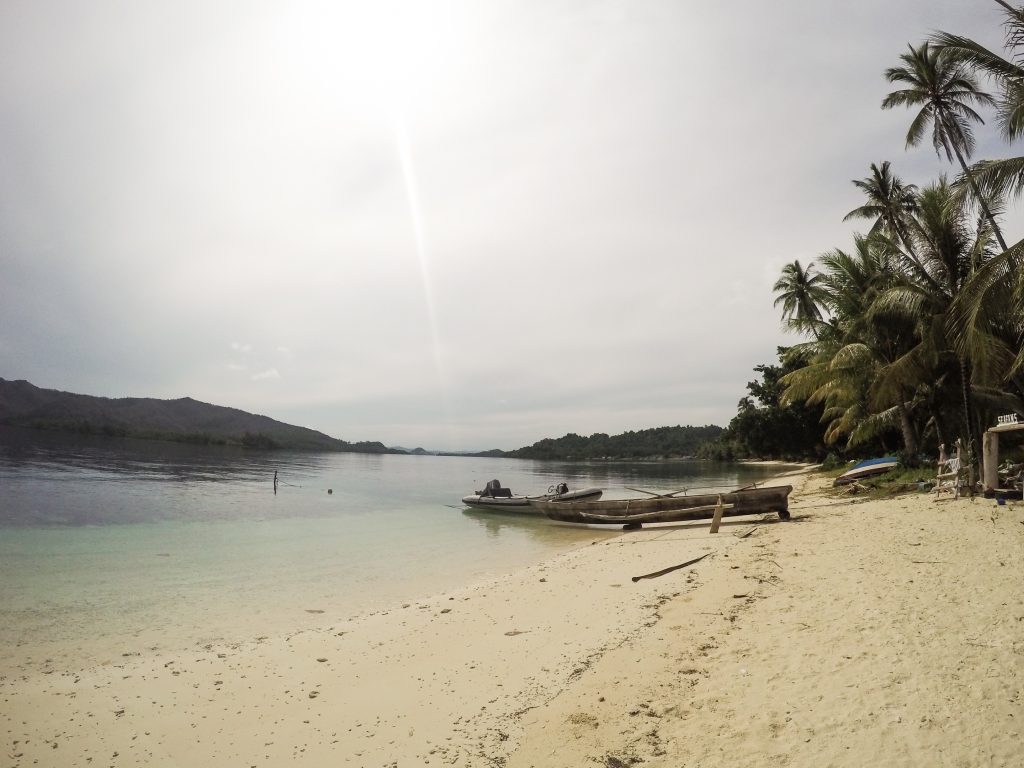 Visiting Manyaifun, ask the locals. Every person is a witness!

The thing that concerns me is that if fishing is allowed in this area, which at the same time is an important aggregation site for manta rays, they could accidentally be wounded by hooks, or entangled by fishing lines, or even hit by the propeller.  We hope that the information we collect will provide the Raja Ampat’s government reason for follow up and perhaps eventually the area will be truly protected.

The next day, Ronald and I visited the nearby Island of Manyaifun, where we found the small boat that had joined our manta watching the previous day. As we landed, Ronald starting to talk with the boat’s owner who was sitting under the shade of a tree.  It turned out that he’s actually one of Ronald’s relatives: His family is basically everywhere in Raja Ampat! Haha.  They said they often see manta rays around the region, spreading to almost in every island. That’s important information for us, and we will add more islands to be surveyed. That’s “science detective” working. Every person is a witness!