Continuing with the BHS website’s anniversary celebration, we are revisiting some of the site’s most viewed posts.  Based on viewer feedback (not viewer numbers) this was the most popular post.  It’s our favorite too!  If you haven’t read this post and are interested in the how and why of the ocean currents that flow through Indonesia, this post is a must!  Or perhaps you just forgot what a Sverdrup is?  Read on; this is fascinating!  This post originally appeared as a Conservation/Science blog. 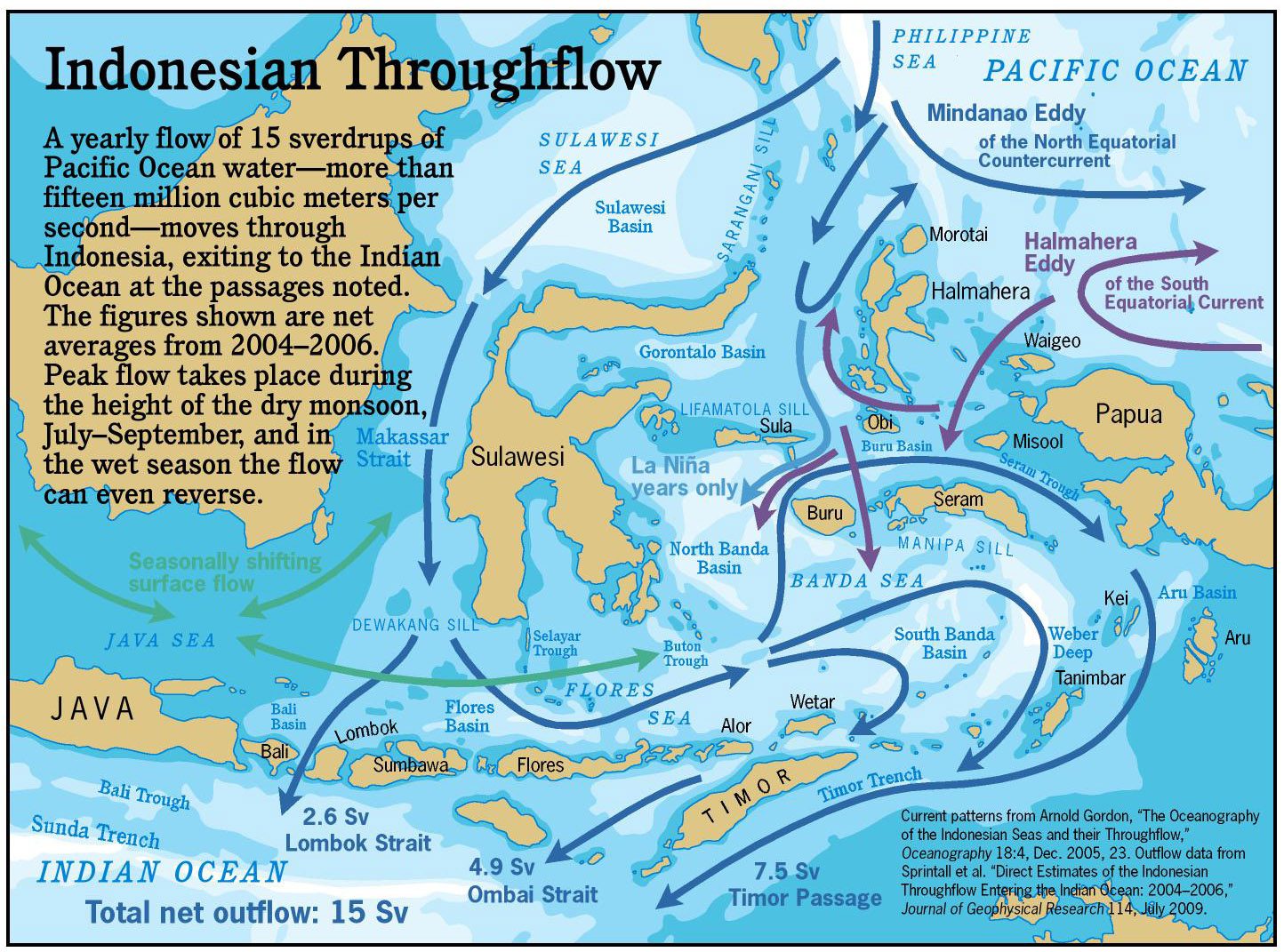 If Indonesia did not exist, the earth’s day would be significantly shorter than the approximately twenty-four hours to which we have become accustomed. This would have a dramatic impact on the clock industry, of course, and familiar phrases like “twenty-four/seven” would have to be modified. But Indonesia does exist, and its seventeen thousand islands, together with a complicated multitude of underwater trenches, basins, channels, ridges, shelfs, and sills, continue their daily work of diverting, trapping, and otherwise disrupting one of the most voluminous flows of water on earth, a task that consumes so much energy that it slows the very spinning of the globe.

The flow that passes through Indonesia is called the Indonesian Throughflow (ITF), and was first noted by oceanographer Klaus Wyrtki in 1957. Its source is the Philippine Sea and the West Caroline Basin, where the incessant blowing of the Trade Winds, and the currents they generate, have entrapped water from the great expanse of the Pacific. In the Pacific Ocean northeast of the Indonesian archipelago, the sea level is twenty centimeters above average; in the Indian Ocean south of Indonesia, because of similar forces acting in an opposite direction, the sea level is ten centimeters below average. This thirty centimeter differential—an American foot—sets in motion a massive movement of water.

The volume of this flow is so great that familiar units like cubic meters and gallons quickly become unwieldy, so oceanographers have invented a unit they call the “Sverdrup,” named after Norwegian scientist Harald Sverdrup of the Scripps Institution of Oceanography. One Sverdrup is a flow of one million cubic meters per second, which is a lot of moving water. Think of a river one hundred meters wide, ten meters deep, and flowing at two knots, and then imagine one thousand of these rivers—that’s one Sverdrup. The Indonesian Throughflow, scientists estimate, represents 15 Sv, or fifteen thousand of these rivers.

Three quarters of this flow is carried in the upper few hundred meters, and the rest moves through Indonesia’s network of deep basins. The seasons affect the rate of the Indonesian Throughflow, and it is strongest during the southeast monsoon, peaking in August. An El Niño year disrupts this pattern by diverting the Equatorial Tradewinds, pushing the water east, away from Indonesia.

As it tries to cross Indonesia, the Through-flow finds itself blocked and shunted aside by the archipelago’s complex geography. The deep flow immediately hits a barrier at the Sarangani Sill, a berm that connects Sulawesi and the Philippines below about thirteen hundred meters. The Sarang-ani forces the deep flow down the eastern flank of Sulawesi, entering the Banda Sea through the Lifamatola Strait, between the Sula archipelago and Obi. From the Banda Sea the deepwater flow reaches the Indian Ocean in a complicated mix with the shallow flow.

The shallow flow can cross the Sarangani Sill. It heads south through the Makassar Strait west of Sulawesi and enters the Bali Sea, and from there, the Flores and Banda Seas. At this point the water, still trying the reach the Indian Ocean, meets a barrier: the Lesser Sunda Islands, sweeping in a tight chain from Bali to Timor. The only significant break in this chain is the Lombok Strait. The rest of the water has to go to the Banda Sea before returning down the Ombai Strait, between Timor and Alor, or along the passage south of Timor.

The Lombok Strait, though narrow and blocked in the south by the two-hundred-eighty meter deep Peninda sill, still offers a very direct path, and almost twenty-five percent of the shallow water flow through Indonesia passes here, or a flow volume of 2.6 Sv. This means that the net flow south past East Bali equals twenty-six hundred of our hypothetical hundred-meter-wide rivers running at two knots.

Bali and Lombok are about thirty-five kilometers apart at the narrowest point, between Gili Selang and Gili Trawangan, Lombok. The net south-tending flow through here, then, is equivalent to the entire top thirty-seven meters of water running at four knots. Since this is an average over the year, and the direction of flow through the strait shifts with the tides, one can easily see how things get very, very wild at the East Bali (and Nusa Penida) dive sites.

The reefs of Bali, particularly in the Northeast and East, are in an ideal position to benefit from this flow. Water pulled from all over the Pacific Ocean, then swept through the rich nooks and crannies created by the Indonesian archipelago, carries with it the planktonic eggs and larvae of just about every species of fish and invertebrate known in the entire Pacific region. This, to a large degree, is why the reefs of Bali are so incredibly diverse, and why, given enough time, you could probably find just about any animal here that you want to see.

And Bali, unlike most of eastern Indonesia, is positioned to receive Indian Ocean influences as well. Because of the strong net throughflow from the Pacific, little Indian Ocean water reaches, say, the famous reefs of the Banda Sea. But Indian Ocean water—and Indian Ocean plankton—cycles through Bali and the other Lesser Sunda islands on a seasonal basis.

The Indonesian Throughflow also performs another very important function. Because it is so strong, and the bathymetry of the islands is so complex, the force of the throughflow churns together deep and surface water. Tropical seas are typically unproductive, in many cases because nutrients like phosphorus and nitrogen are trapped in solution in deepwater basins. Because of the throughflow, this is not the case in Indonesia. (one oceanographer calls it the “Indonesian Mixmaster”)

In some areas this mixing occurs as a seasonal upwelling of deep, nutrient-rich water. Bali is one of these, and every southeast monsoon draws to the surface cold, fertile water from the Bali Trough, a three-and-a-half-kilometer-deep basin just south of the island. The upwelling fuels an explosion of phytoplankton growth, bringing new vitality to the reefs of East Bali and Nusa Penida.