“East of the Wallace Line: Monumental Art from Indonesia and New Guinea”: A Yale University exhibit

“East of the Wallace Line: Monumental Art from Indonesia and New Guinea” A Yale University exhibit. 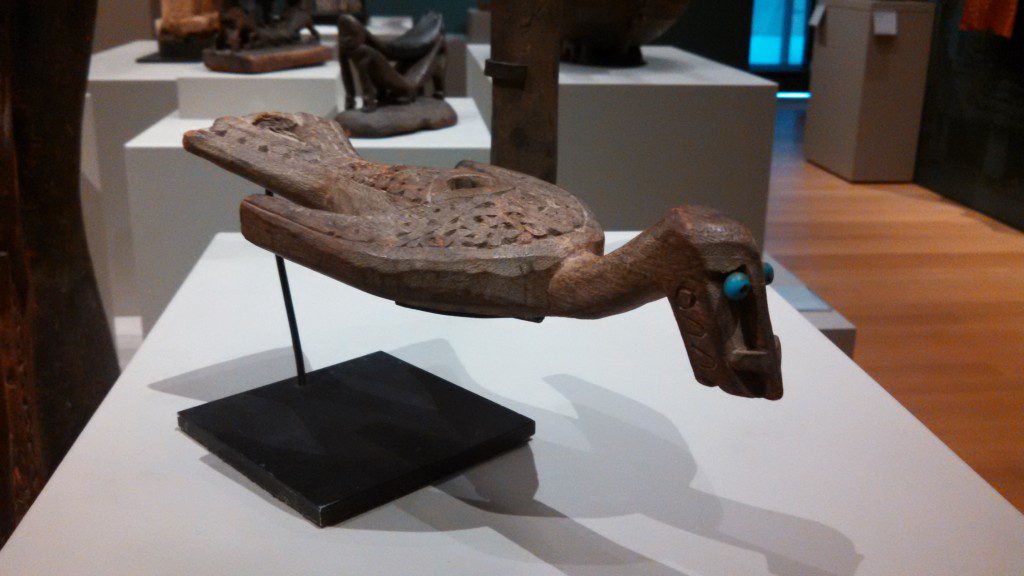 In September 2014 during a family visit, Burt and I traveled to Yale University’s Art Gallery to see “East of the Wallace Line: Monumental Art from Indonesia and New Guinea”. A friend had sent the link to Yale’s exhibit, and we were very surprised to learn that several pieces in the collection were produced in the Bird’s Head, specifically Cenderawasih Bay. 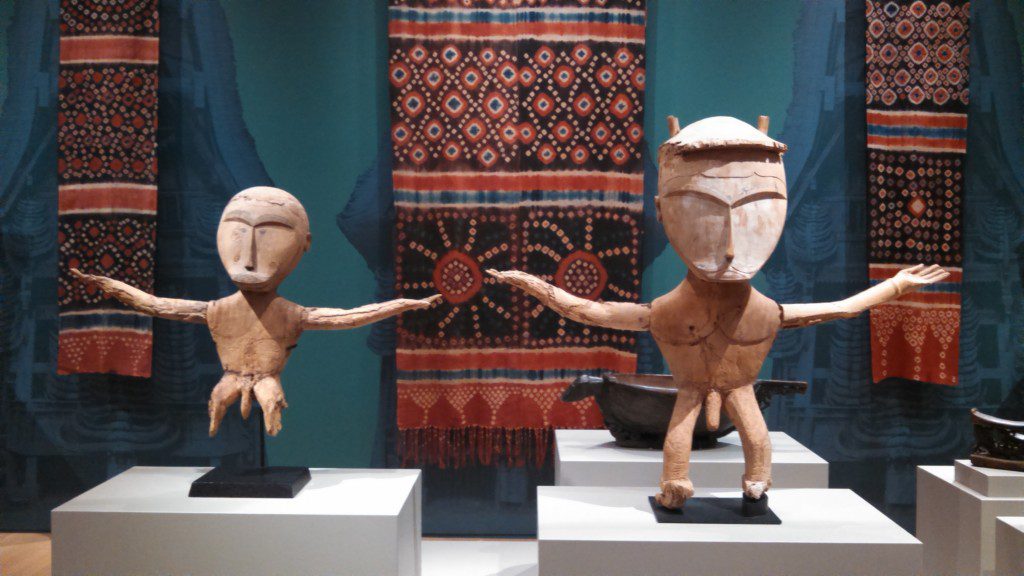 Figural woodcarving from the Raja Ampat islands were expertly worked and very distinctive, with oval facial planes and long, narrow noses. Very few of these carving survive, most of which are in the Royal Tropical Museum in Amsterdam. Scholars believe these figures represent deities. If this is true, it is a rare instance in eastern Indonesia of producing figures of the divine. Figural representation was usually reserved for the ancestors while the divine remains abstract. 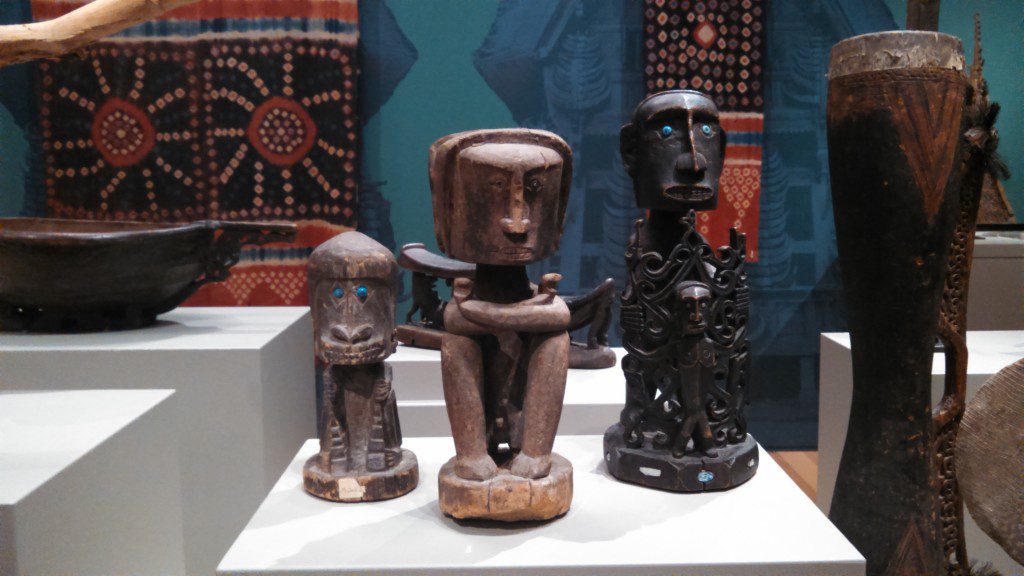 Developed in western New Guinea (present day Papua), the so-called korwar style of carving is characterized by distinctive facial features, including deep-set eyes and an arrow-shaped nose. Korwar figures represent ancestor spirits that are highly venerated but also treated with awe and caution. While korwar are religious objects, similar facial features are found on objects that have a daily function, such as boat prows, tool handles, and bowls.

Yale’s exhibit began with a short bio of Wallace: “Born in Wales in 1823, he was one of the 19th century’s foremost natural scientists, a biologist and anthropologist. He is best known for independently conceiving the theory of evolution through natural selection, which was published together with Charles Darwin’s writing on the subject in 1858. At the time, Wallace was engaged in fieldwork in the Malay Archipelago (now Indonesia). During his stay there, from 1854 to 1862, he identified the faunal divide–now called the Wallace Line—that separates the archipelago into two distinct parts: a western portion in which the animals are primarily of Asian origin and an eastern portion in which the fauna connects to Australia… Wallace died in 1913.

When Wallace first traveled to Cenderawasih Bay in 1858, western New Guinea was considered by “Westerners” to be remote and isolated. Yet Southeast Asians from as far away as present day Vietnam had accessed the region for up to 2000 years for a much sought after luxury: bird-of-paradise feathers.”

Wallace lived in Dorey (present-day Manokwari) and traveled a bit around Cenderawasih Bay for four months, April through July 1858, looking for exotic animals of all species, but he mainly concentrated on birds of paradise. While his search for birds of paradise was not totally successful, Wallace observed a great deal about Manokwari’s people and how their art related to their daily lives. During our travels through Cenderawasih’s villages and during the few hours we had spent walking around modern Manokwari, we have seen little evidence of the population’s love for fine arts. Yet, after reading about the exhibit we were excited to know that in its recent past Cenderawasih had produced some credible art, and that we would be able to view similar pieces to those Wallace had seen when he lived in Dorey. 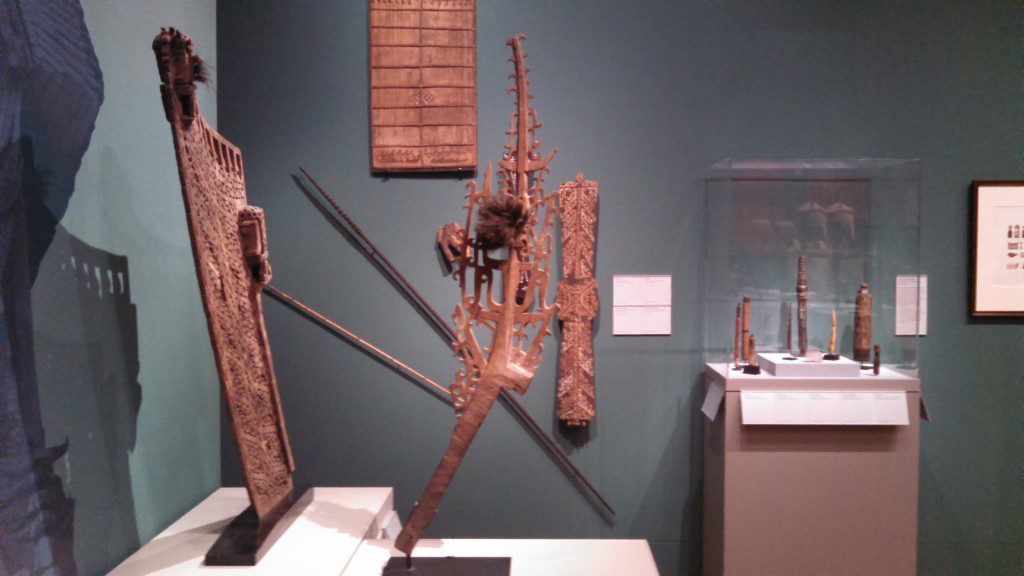 Ever the observant anthropologist, Wallace also detailed his observations of local culture. Walking around Dorey, he observed, “It is curious that a rudimental love of art should co-exist with such a very low state of civilization. The people of Dorey are great carvers and painters…. The high-beaked prows of their boats are ornamented with masses of open filigree work, cut out of solid blocks of wood, and often of very tasteful design. As a figurehead, or pinnacle, there is often a human figure, with a head of cassowary feathers to imitate the Papuan “mop”. The floats of their fishing lines, the wooden beaters used in tempering the clay for their pottery, their tobacco-boxes, and other household articles are covered with carving of tasteful and often elegant design…. They have all a decided love for the fine arts, and spend their leisure time in executing works whose good taste and elegance would often be admired in our schools of design!” (Alfred Russel Wallace, The Malay Archipelago, 1986 ed., p. 511)

Excited to learn some new information about Papuan art and culture, we decided to post some of the images we shot at the gallery with our phone cameras (with permission) so that anyone interested in the Bird’s Head would be able to see the complexity and diversity of its historic arts, which rivals the abundance of its marine life.

Maurine Shimlock and, her husband Burt Jones, are marine life photojournalists, trip leaders, conservationists and this site’s administrators. To see more of their work visit their website, Secret Sea Visions.