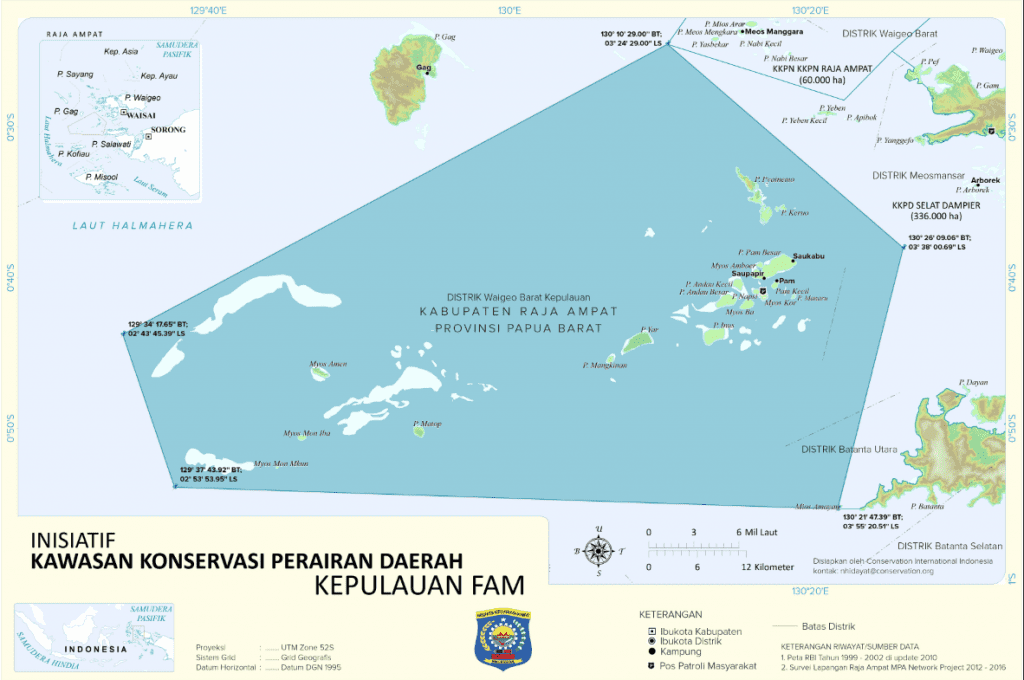 After a lengthy process, in January of 2017 community officials in the Fam Archipelago (or “Pam Archipelago” according to local dialect), from the villlages of Pam, Saukabu, and Saupapir reached a consentual agreement to establish a Marine Protected Area (MPA), in an effort to protect and preserve the abundance of marine resources lying beneath the water of Raja Ampat’s ‘mini’ Archipelago.

The agreement was manifested in the form of an “Adat” declaration (“Adat” can be interpreted as a “Ancestral Entity”), which was held in unison with the 87th commemoration of the Holy Bible’s arrival in the Archipelago of Fam. According to the communities’ belief, the bible was brought to Fam Archipelago by Reverend Y. Fenan Laber, originally from the Maluku Archipelago, on the 16th of February 1930.  This effort was continued by Reverend Yesaya Pupela only a year later. 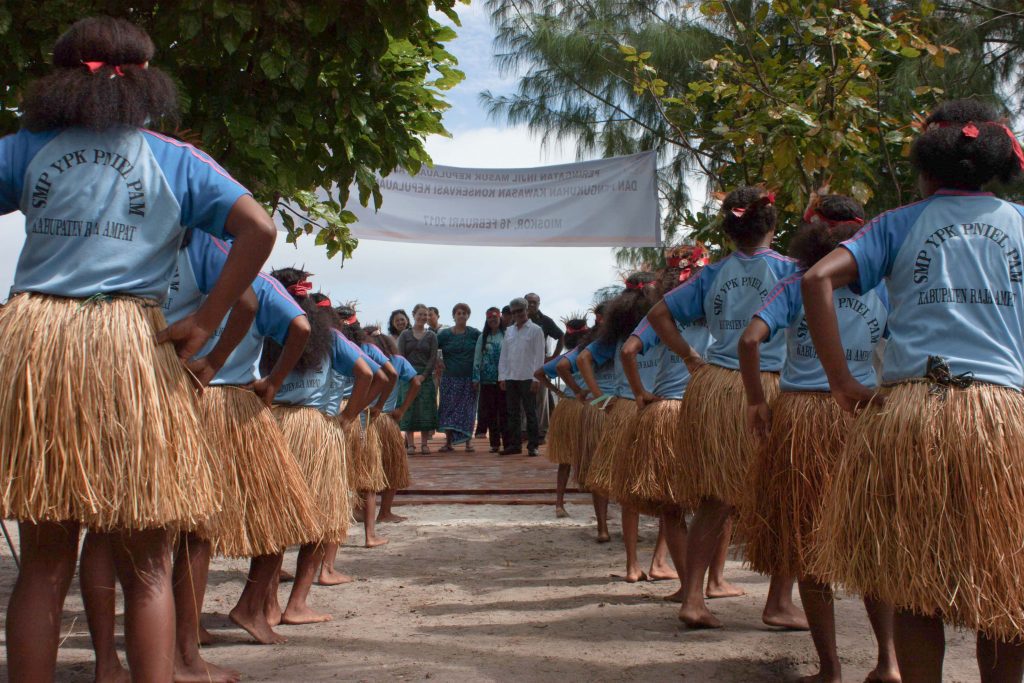 Fast forward to the event held on a sunny Thursday, February 16, 2017.  Shortly after the traditional welcoming dance of “Yosim Pancar” and the greeting of the guests of honor, the program swiftly shifted to series of religious activities. The event opened with a Tableau (or Pagent) reenacting the experience of the pioneer preacher upon his maiden voyage on the Gospel Ship (or “Wairefo” according to the local language). During the performance, it was revealed how some members of the community in the Fam Archipelago ignored the Doctrine of Christ, kept resistance, and even turned to violence; before one member of community after, eventually repented.

The message delivered through the Tableau, without ignoring the religious values, became more interesting when it was related to the contemporary context: especially to the efforts of conservation and preservation of environment both in Fam Archipelago and Raja Ampat in general. Through several conversations with our colleagues whose involvement in conservation activism in Raja Ampat goes way back, be it those who work for NGOs, in the private sector, and to government officials; their unanimous conclusion was that initiatives on environmental conservation and preservation of nature in Raja Ampat is definitely not “a walk in the park”. 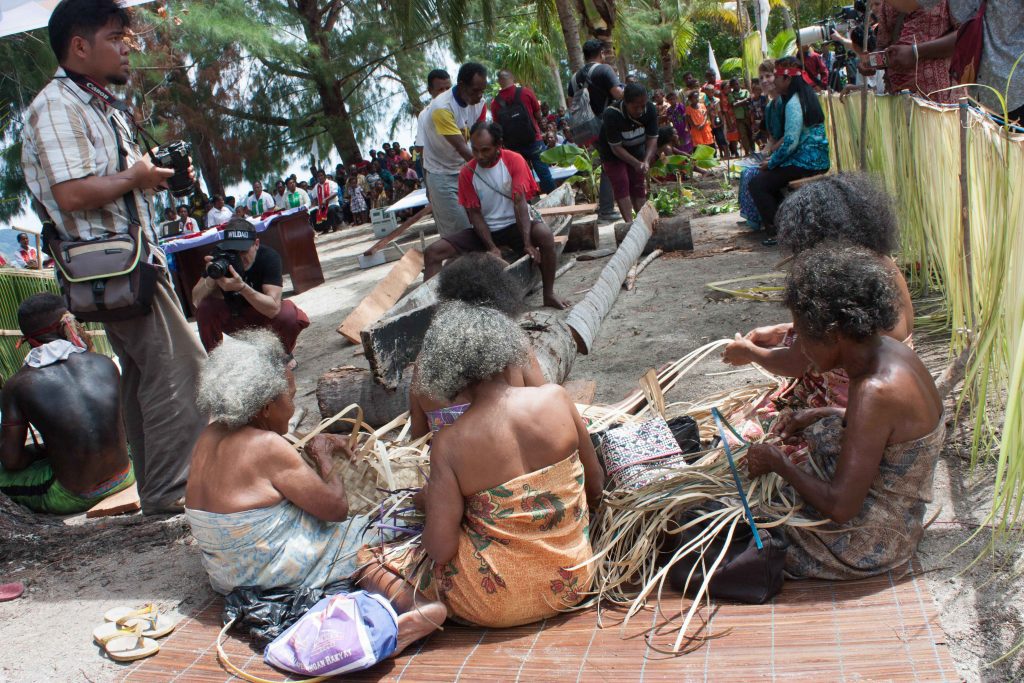 Tableau’s art performance tells the story of how the Holy Bible was ‘greeted’ by the inhabitants of Fam. (Photo by: Nikka Amandra Gunadharma-CI Indonesia/2017)

In the beginning of the process, our conservation activists/colleagues noted that they received skeptical responses, refusals, and considerable resistance. Despite everyone’s best efforts not all the proposals were manifested, but at the end of the day Raja Ampat has succeeded in establishing five MPAs, all of which were developed based on the aspirations of the grass roots activism.  Raja Ampat’s MPAs include: Ayau-Asia; Mayalibit Bay; Dampier Strait; Misool, and Kofiau-Boo. 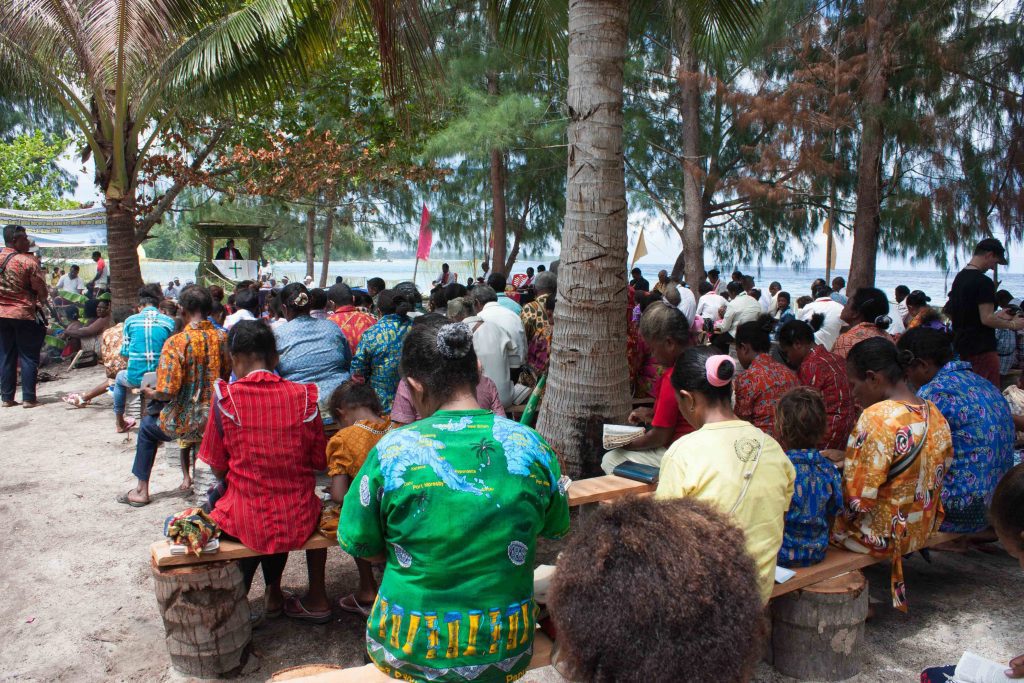 The Adat’s Declaration on Fam Archipelago MPA was held in parallel to the 87th commemoration on the arrival of the Holy Bible in the Fam Archipelago. (Photo by: Nikka Amandra Gunadharma-CI Indonesia/2017)

Back to the celebratory event held at the Islet of Meoskor, Fam Archipelago.  When the Tableau reached a certain point, Reverend Apolos Zeth Latumahina from “Klasis Raja Ampat Utara Gereja Kristen Injili (GKI) di Tanah Papua” (“North Raja Ampat Class of Papua’s Evangelical Christian Church) commenced a procession attended by members of community from the three Villages in Fam Archipelago. Soon after the mass, the “Wairefo” set sail with the guests of honor on board, accompanied by the community members. 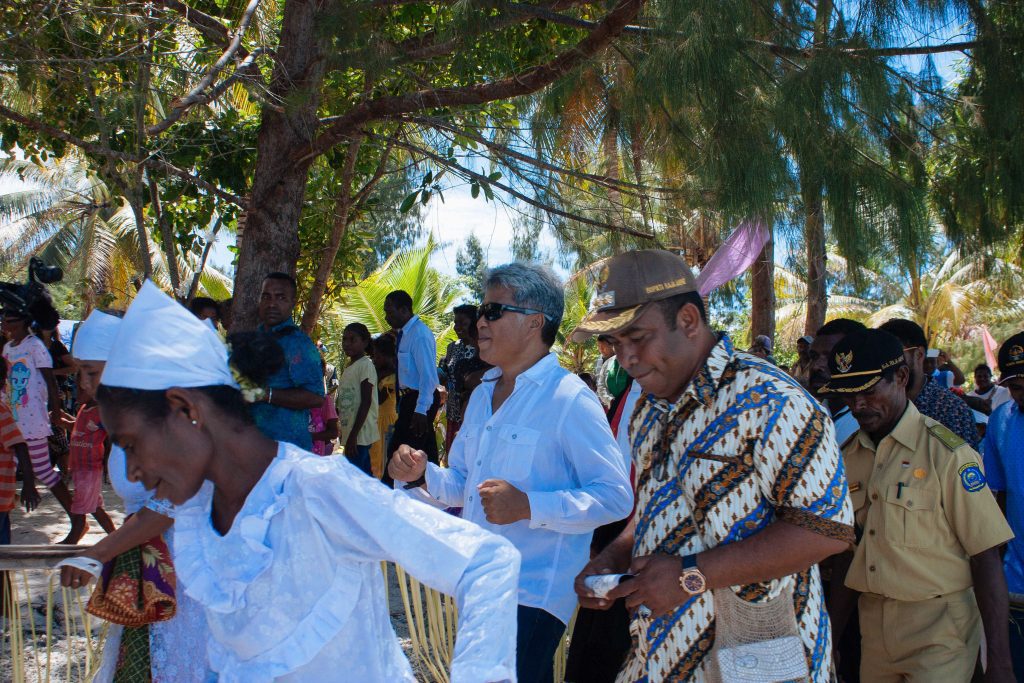 A symbolic “Wairefo”, or the Ship of Gospel, “sets sail’ once more to escort guests of honor to the next ceremony. In white shirt is the Vice President for CI Indonesia walking with the Regent of Raja Ampat (in Batik shirt). (Photo by: Nikka Amandra Gunadharma-CI Indonesia/2017)

When the Gospel Ship anchored, the main attraction shifted to the ratification process of the MPA declaration, and the symbolic inauguration of the Fam Archipelago’s Monitoring Post. As many as 20 clans’ representatives, all the village chiefs and the Chiefs of Adat from the three Villages in Fam Archipelago confidently put pen to paper, confirming a consensus to the protection and management of their marine zone, an area of not less than 360,000 hectares (roughly 900,000 acres). Furthermore to strengthen the declaration, it was ratified by the Regent of Raja Ampat, Abdul Faris Umlati, SE., acting as witnesses to the Adat’s commitment, and the representative from the church as well; Mr. Otniel Mayor.

At the closure of the event, the Regent of Raja Ampat, the Head of Marine and Fisheries (Marthen Luther Bartholomeus Imbir, S.Pi.), Charles Imbir (member of the Raja Ampat’s House of Representatives), along with Ir. Ketut Sarjana Putra, M.Sc. (Vice President of Conservation International (CI) Indonesia), cemented their commitment and, as a symbolic inauguration, pulled the curtain to reveal the Fam Archipelago Monitoring Post’s signage . 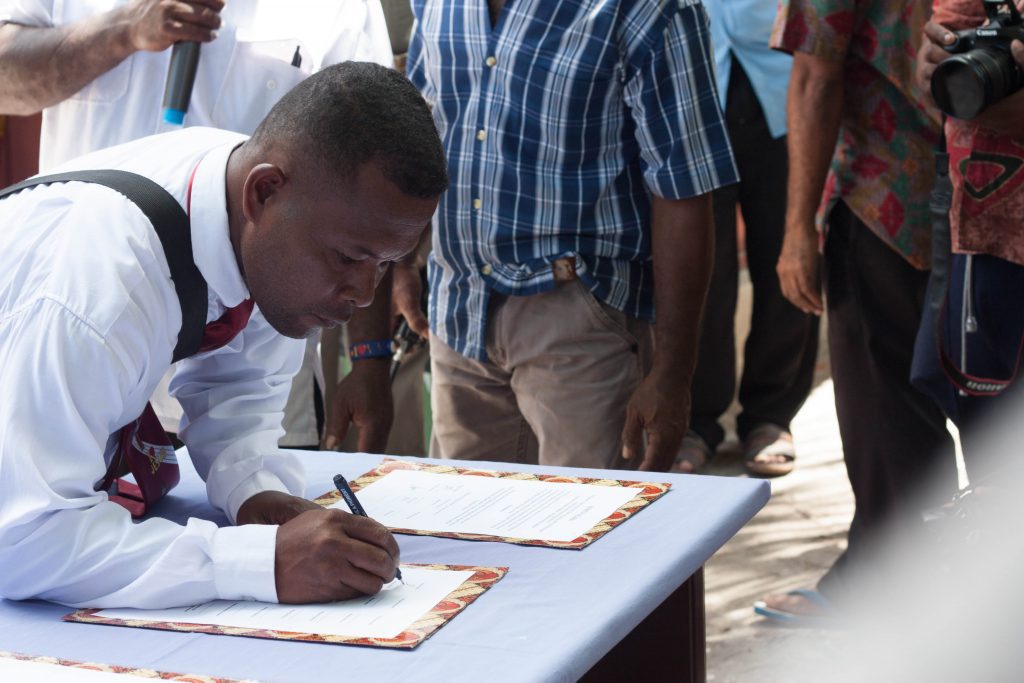 This Adat declaration of Fam Archipelago MPA should be viewed not only as an epilogue but as a beginning towards the next chapter in the area’s conservation efforts.  Challenges will be met collaboratively by the communities and other stakeholders in the archipelago. Inevitably, it will continue to be a challenging process until Fam Archipelago’s MPA stands “side by side” with the other five established MPAs in Raja Ampat. The Fam’s MPA must first pass the legal phase of the process, then a management and zonation plan must be created, the criteria must be established for selecting candidates for MPA managers, and a management unit must be established.  All this must pass through the bureaucratic labyrinth of countless lobbies, meetings, and public consultations, along with a series of other requirements before its MPA is legally established. 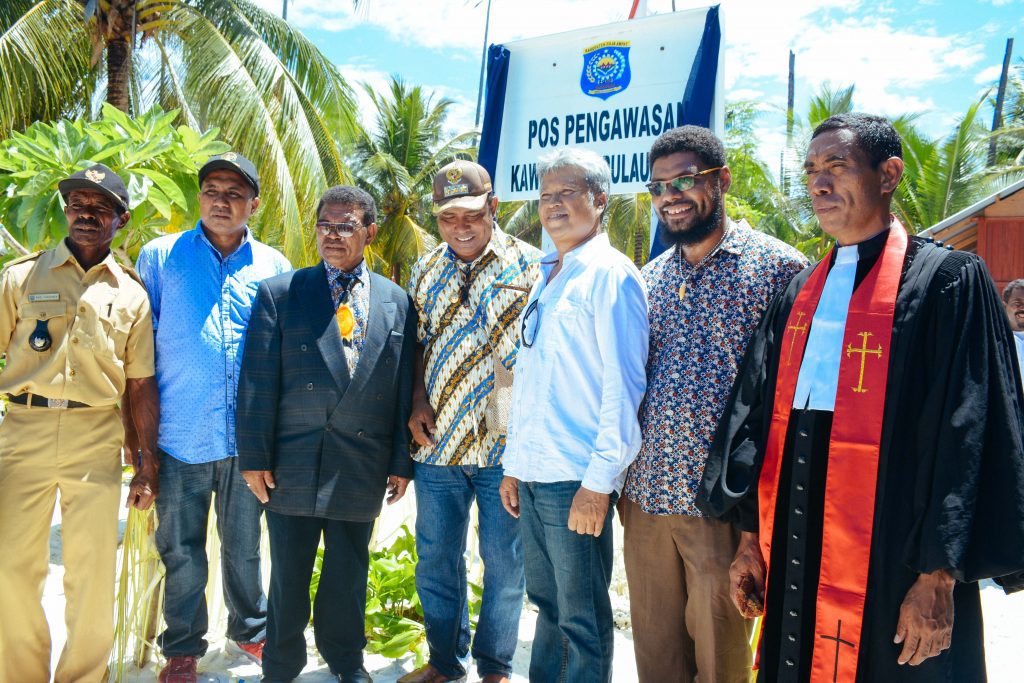 Seems like a long and winding road, indeed. However, when reminded of all the potential, enthusiasm, passion and commitment from the communities inhabiting the archipelago located under in “District of Waigeo Barat Kepulauan” (“District of Archipelagic West Waigeo”), Fam can look toward the future’s  far horizon with heads held high and hearts filled with genuine optimism.