For a number of years there has been an ongoing conflict between endangered Coconut Crabs (Birgus latro) and the uninformed or non-caring visitors to the BHS who want to eat them! However, many informed and caring visitors have reported that they are for sale at the Fam (Pam) Island’s Piaynemo (Penemu) lookout dock.

This article is compiled from various sources and will attempt to explain what is being done and what you can do as an informed and caring tourist to help save these beautiful and endangered species.

As you can see in the image below a visit to the lookout, with its spectacular panoramic view, is rightfully one of the most popular topside attractions in Raja Ampat. 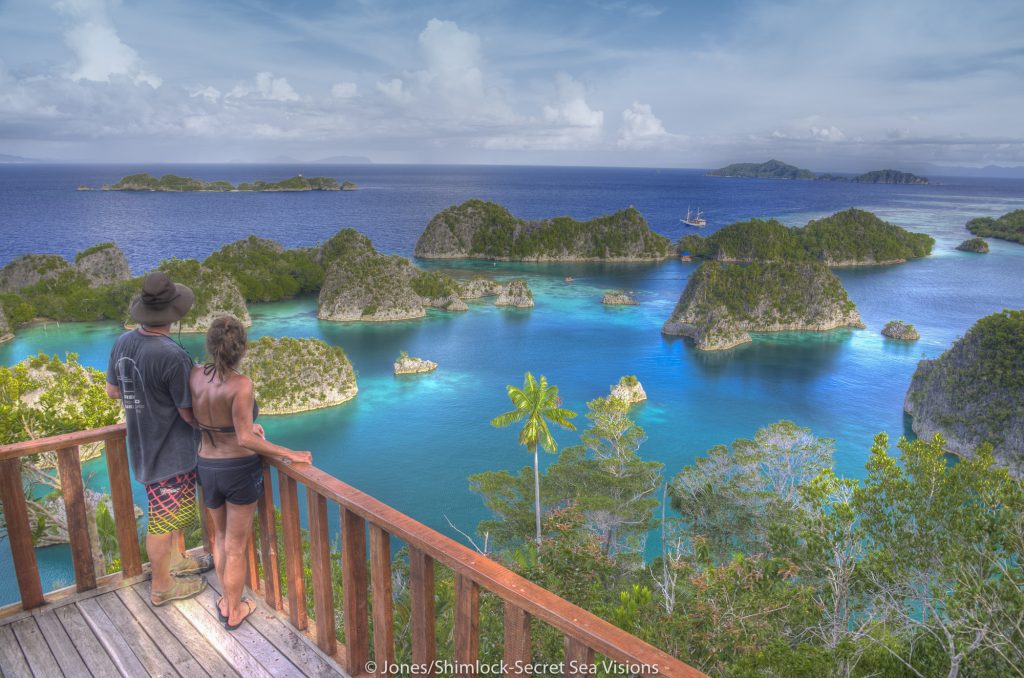 View from the Piaynemo (Penemu) lookout

But all too often visitors landing at the dock are surprised and in many cases horrified to see these creatures bundled in nets and being offered for sale.  Unfortunately, for some visitors, the temptation to buy and eat these rare and exotic crabs is overpowering. 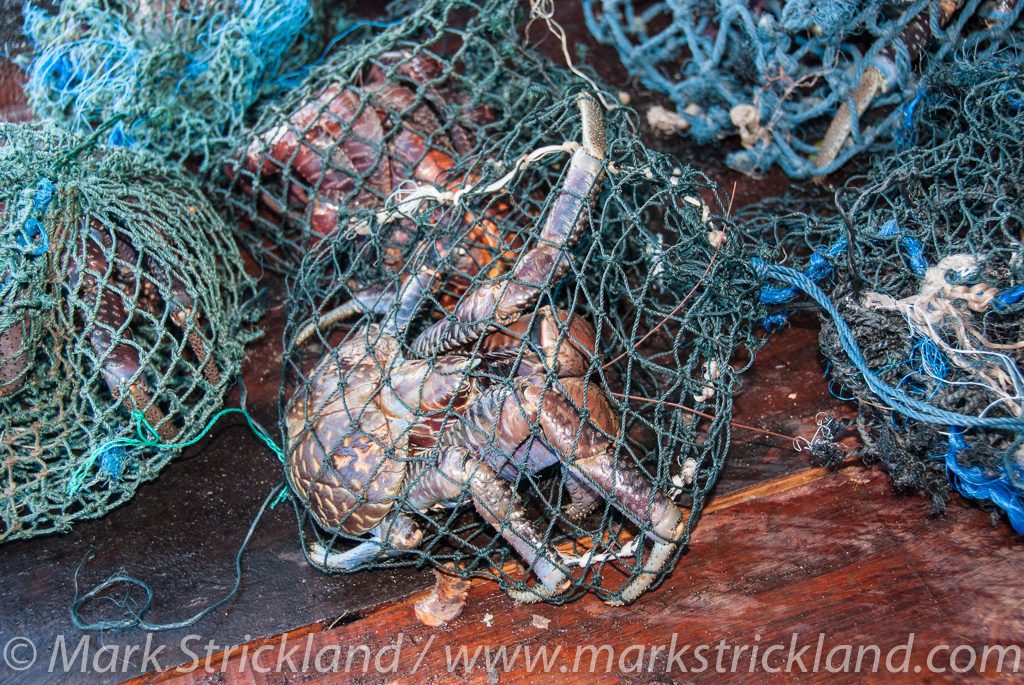 Threatened throughout their range, Coconut Crabs are being sold to tourists for food.

There are a number of factors at play, social and economic, which make resolving the problem very complicated.

The crabs legal status and protection is unclear.  According to the Ministry of Forestry, in Fam/Piaynemo, it is illegal to sell female or “first generation” crabs.  It is unclear, and apparently very difficult, to discern if crabs are “second generation”.

Economically, the local communities need to make money.  If not they will no longer support conservation initiatives.  The natives own Raja Ampat and were there longer before the tourists! So the plan is to reduce the demand, capture and sale of crabs slowly and then to eventually ban it.  (This technique was used effectively in Bali with sea turtles, which were eaten as an essential element of many religious ceremonies.  Slowly through education and outreach programs the consumption of turtle meat was reduced and now it is illegal to catch and eat turtles in Bali.  Although unfortunately it probably still happens!) Economic alternatives are available, i.e. building or working at a homestay/resort or creating products from sustainable resources, which can be sold to tourists.  Quite often visitors landing at the lookout dock are also greeted by local women selling coconut oil, lotions and soaps.  Even though these women may know it is illegal to sell the crabs they are hesitant to say anything.  After all the crab sellers are from the same villages and in some cases relatives of the women selling their “legal” and sustainable-resourced products.

BBKSDA (Balai Besar Konservasi Sumber Daya Alam Papua), is the branch of the Ministry of Forestry which deals with protected areas and species.  They have a base in Sorong but because they are part of the Ministry of Forestry they don’t have patrol boats!  They recently asked Conservation International (CI) to help them facilitate a patrol along with outreach/education activities to enforce crab protection.  This is how the patrol works: when BBKSDA goes on patrol they take a member of the police with them. They then inform the crab sellers that the crabs are protected and tell them to stop capturing and selling them.  They then confiscate the crabs and release them on another island.  Generally they will give 2-3 warnings but if the selling continues, the sellers will be arrested.

With CI’s support a “Crab Farm” is being created where confiscated crabs can be released. The idea is that over time the crab population will increase and tourists will come to the island where they can trek to see the crabs “in the wild”.  It’s obviously much more lucrative to sell a “crab encounter” numerous times than to sell them for consumption. 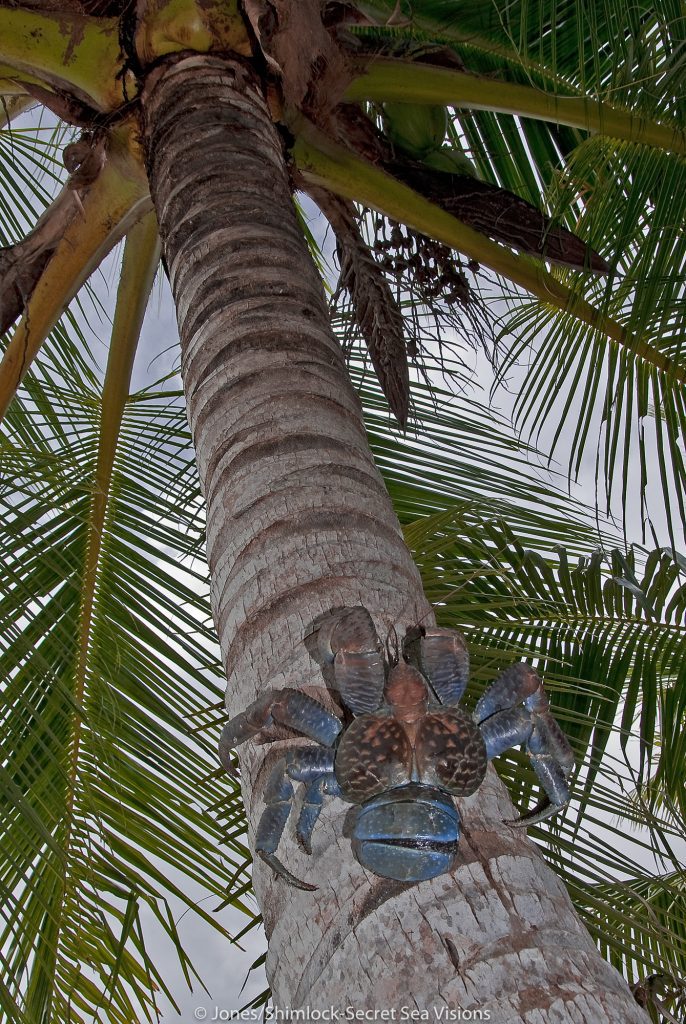 The beautiful but threatened coconut crab. This is what is NOT for dinner!

Reducing demand is a major priority as well.  A circular has been created by Stay Raja Ampat and posted in homestays and resorts throughout the region.  CI and BBKSDA are supporting this SRA initiative. 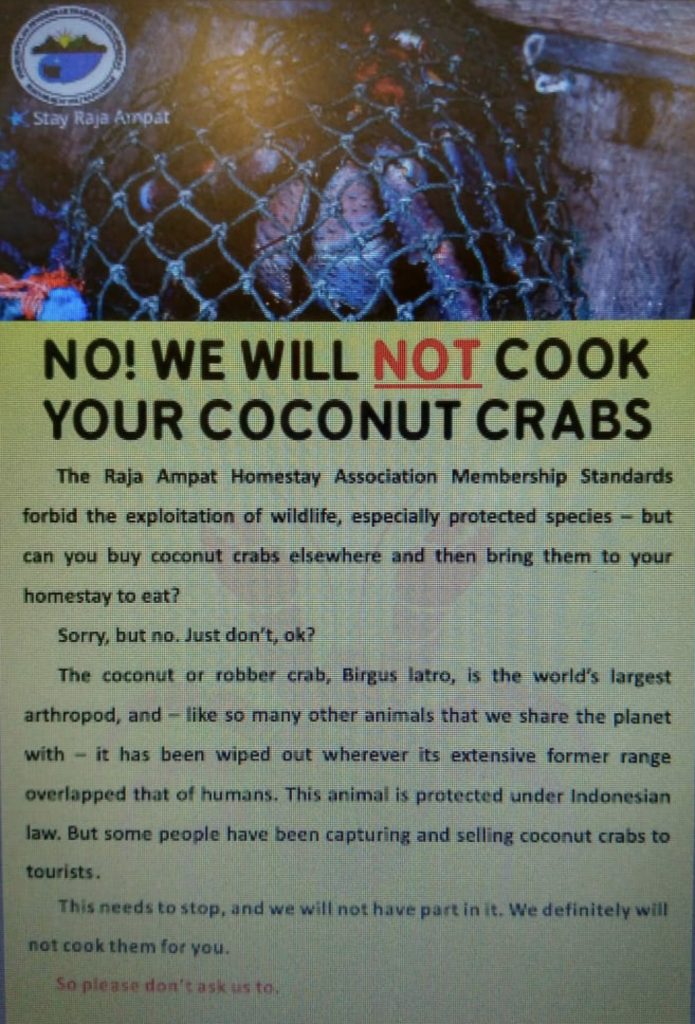 Note: This just in: Meidi writes, BBKSDA has issued a letter to homestays and resorts so that guests do not buy coconut crabs from the community.  Here is the letter. It’s in Bahasa Indonesia as most of the resorts and homestays are owned and run by native Bahasa speakers: 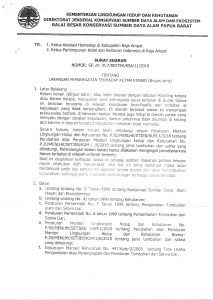 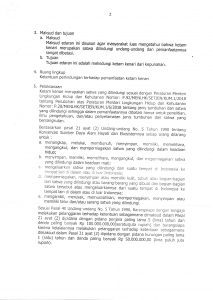 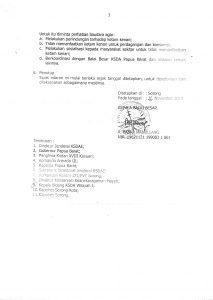