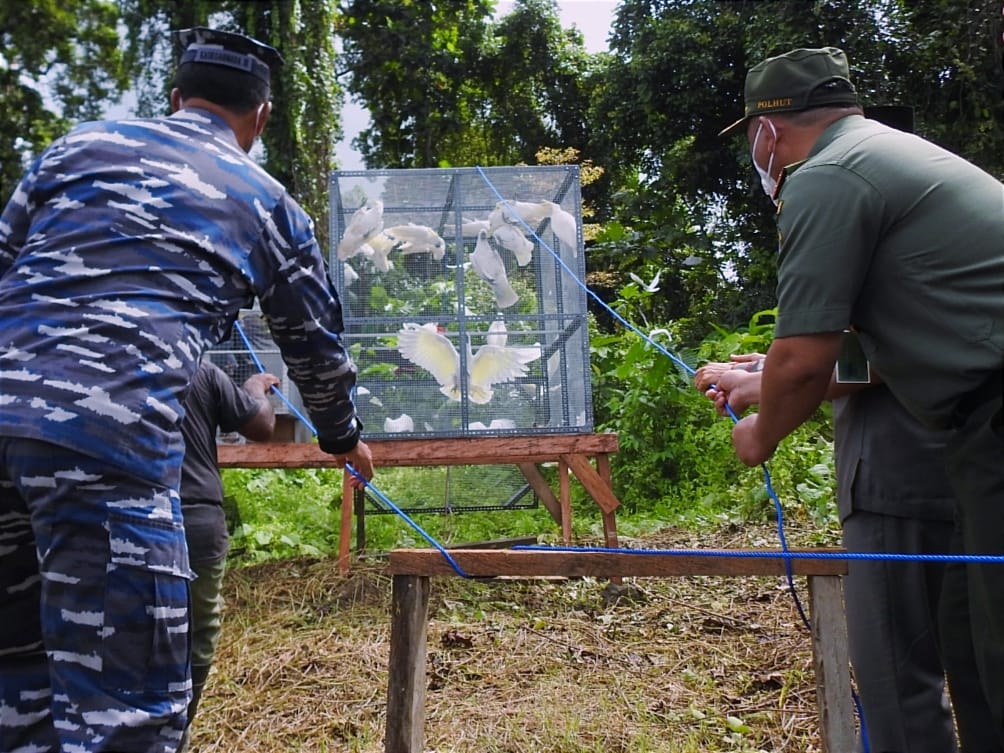 These birds were translocated from various technical units of the Ministry of Environment and Forestry (MoEF) located outside of West Papua, mostly in Java and Manado. Some of those birds were also obtained from patrols conducted within the Municipality of Sorong and Regency of Sorong. All of the birds released are endemic Papuan fauna, and protected under various laws and regulations in Indonesia

All 37 birds scattered into the forest as soon as the doors from their transit cages were opened by the Fleet Command III’s Chief of Staff, First Admiral Yeheskiel Kantiadagho, S.E., M.M., with his staff and some of the event’s invitees. 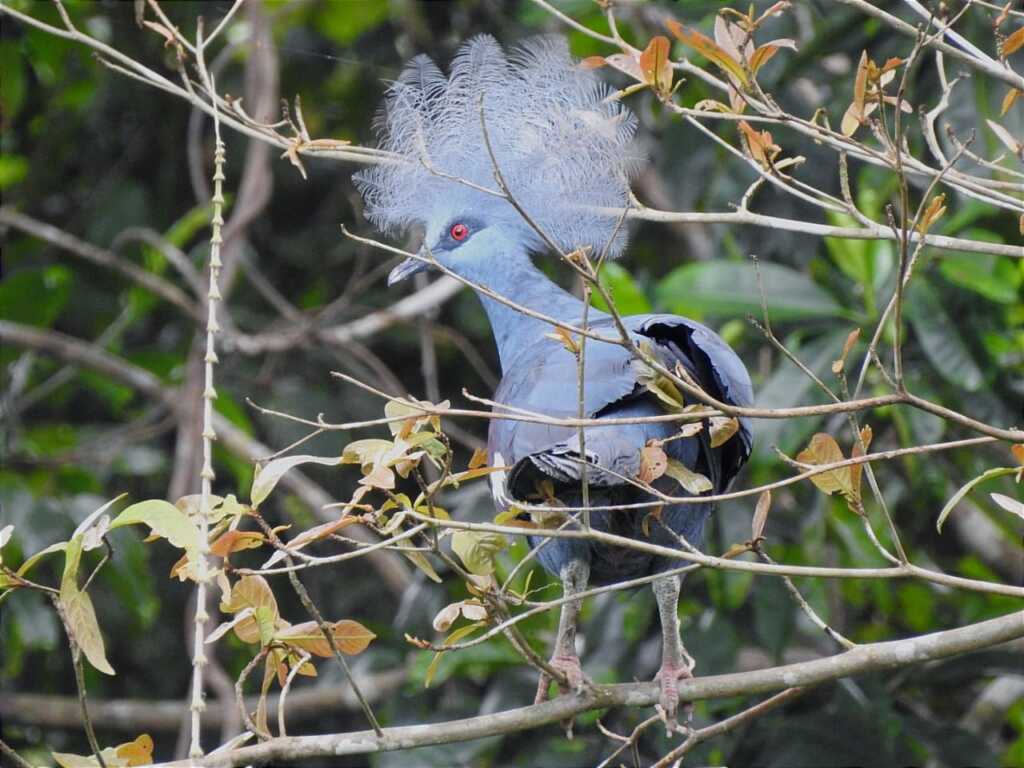 One of the western crowned pigeons released during the event on 28th of September, 2021. As many as 37 birds now roaming the natural habitats within the Fleet Command III’s headquarter in Katapop, Regency of Sorong. (Photo by: West Papua’s Office of Conservation of Natural Resources /2021)

The event, held on September 28th, was a collaboration between the West Papua’s Office of Conservation of Natural Resources**, The Navy’s Fleet Command III, and Conservation International (CI) Indonesia, and was part of a series of activities for this year’s Indonesia’s Nature Conservation Day.  This year’s theme “Living in Harmony with Nature – Preserving the Country’s Wildlife.” This year’s celebration started in May and will culminate in December.

Following the release, highlights switched from the two transit cages to a platform prepared by the organizers for a workshop titled, “Law Enforcement on Ecosystem and Natural Resources Laws, and the Prevention of Illegal Trafficking of Protected Flora and Fauna.” This workshop was presented by five resource staff, and moderated by Syafruddin Sabonnama, SH a member of the Municipality of Sorong’s Regional Parliament.

During his opening remarks, Syafruddin Sabonnama, SH., who established his political career through environmental and social activism in West Papua, stated his appreciation on the military’s roles in the protection of flora and fauna, and conservation efforts as well. He emphasized, “Whoever roams this Land (of Papua), must be held responsible ensuring that he/she will provide benefits for the nature and its people.”

During the workshop, the Fleet Command III’s Chief of Staff, speaking on the Commander’s behalf, stated his concerns about irresponsible human behaviour that cause damage to the province’s natural resources; “We, all the soldiers in the Fleet Command III, are encouraged to treat our environment sustainably so that we can protect this planet that we love.” 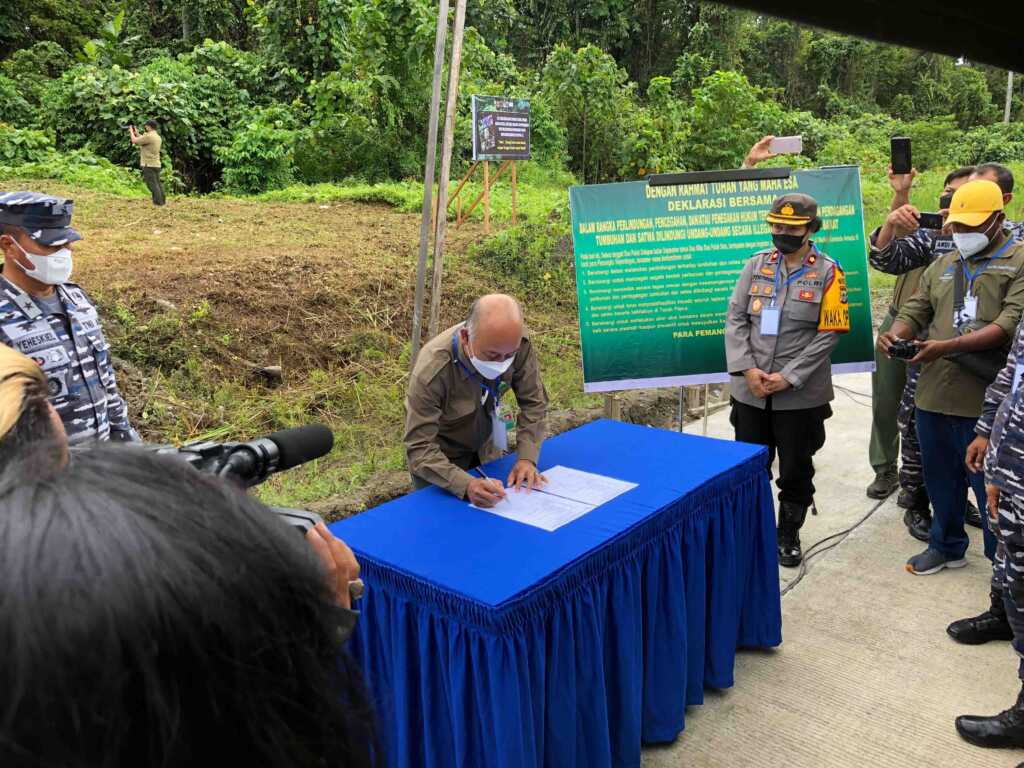 He added, “Everybody present here should be an ambassador for West Papua’s Office of Conservation of Natural Resources. Here at our headquarters, (for) all the birds, fauna, everything here – including the flora: we must protect them.”  Then he emphasized that conservation and prevention efforts (of protected flora and fauna from illegal trafficking), especially in West Papua Province, is in alignment with the Navy’s duty as mandated by Act No. 34 (2004) on Indonesian National Army, specifically as it relates to the country’s sovereignty and law enforcement at the sea – including enforcement towards crimes on natural resources.

In alignment with the Chief of Staff, MoEF’s Acting Director of Conservation Areas Planning, stated that currently, according to 2018’s MoEF’s regulation, there are 919 species of flora and fauna in Indonesia that are protected. “The natural resources surrounding us are entrusted to us by the Almighty and are meant to be passed along to our children and grandchildren. Therefore we should utilize our resources sustainably so that our descendants inherit an intact environment.”

Next to speak was the Deputy Chief of Resort Police. She stated, “That so far this year (2021), their office hasn’t received any reports (on illegal trafficking of protected flora and fauna), so we encourage all members of the communities to convey any information on illegal activities (to us, the police), no matter how small they are.” 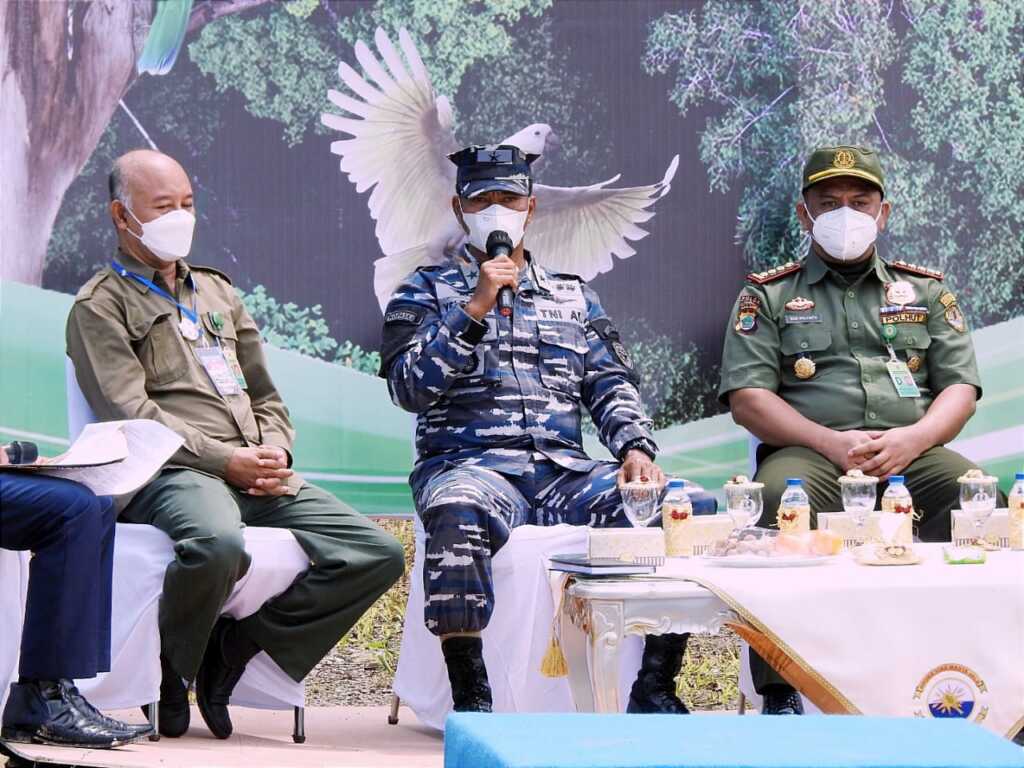 Vice Chairman I of the Regional Parliament, Suwarji, stated that the Land of Papua is filled with extraordinary gifts, that are more than worthy of our gratefulness, of which many species of flora and fauna can only be found here in Papua. “For future generations we must not allow these (endemic to Papua and West Papua) birds to be found easier in translocated populations in Java, where they have been released in similar natural habits, because illegal trafficking in Papua has decimated them locally– (this is why) law enforcement must be firmer.”

In summary, Acting Head of of West Papua’s Office of Conservation of Natural Resources emphasized, “We need to embrace all the stakeholders to collaboratively protect the biodiversity in West Papua Province. Only by safeguarding and protecting the nature, can we benefit from, and savor, the biodiversity we have for years to come.” 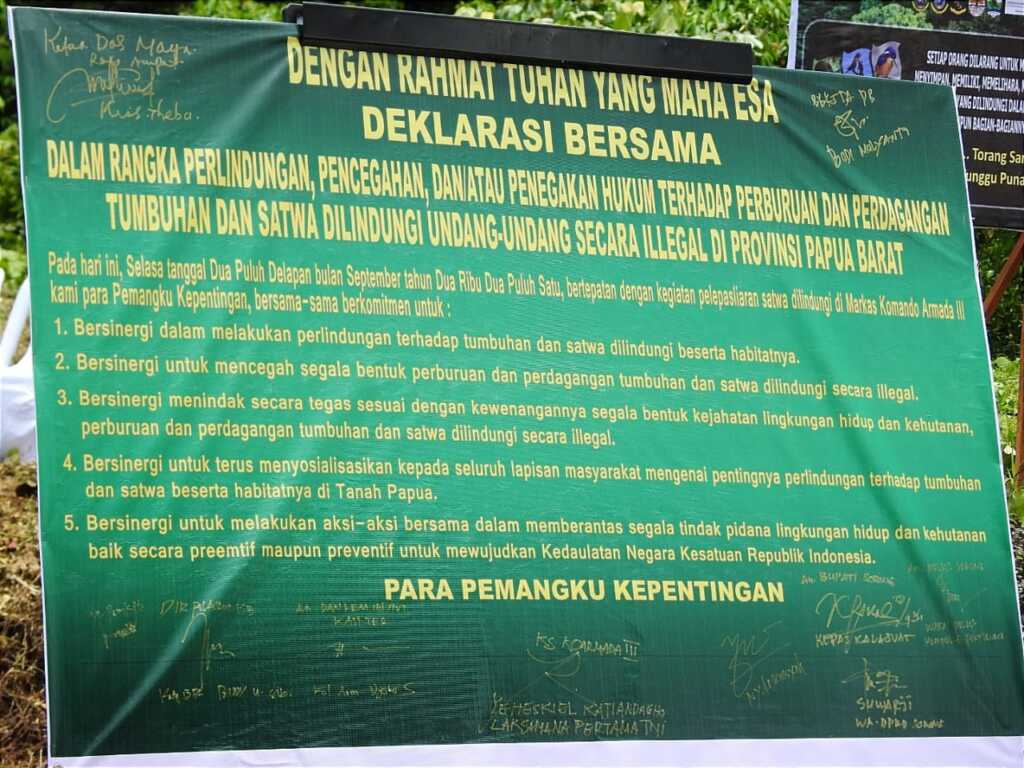 Joint declaration on illegal hunting and trafficking of protected flora and fauna was signed by all the workshop’s resource persons and several invitees of the event. (Photo by: West Papua’s Office of Conservation of Natural Resources /2021)

He added, “According to the law and regulations, we encourage the collaborative safeguarding and protecting of our wildlife as they are of significant wealth in Papua and West Papua Province.” He then closed the workshop with, “Let us not talk about our grandchildren, yet: (let us talk about) our children first – because our grandchildren might not necessarily be able to benefit (from our natural resources).  So, let us not “leave tears” (“air mata” in Bahasa Indonesia) for our children, but let us leave  a “wellspring” (“mata air” in Bahasa Indonesia) for them – for the sustainability of our beloved Papua and Earth.”

During the event, West Papua Program Director of CI Indonesia, Meity Ursula Mongdong, opined, “CI Indonesia, based on memorandum of understanding between CI Indonesia and MoEF, is committed to support the government and the communities in developing conservation areas in Indonesia, especially in (West) Papua,” as she continued, “This collaborative event aims to build collective commitment between the stakeholders who care about conservation and law enforcement regarding crimes on the environment in West Papua.” 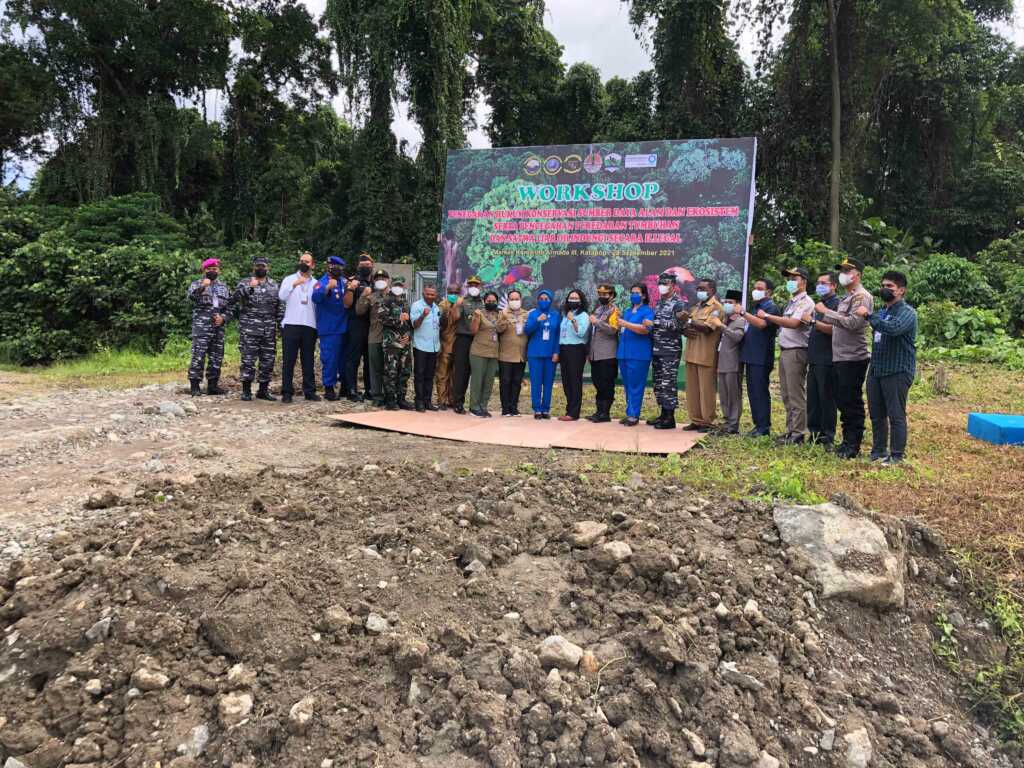 Some of the event’s participants taking pictures prior to lunch time during the event. (Photo by: CI Indonesia/2021)

After the workshop, moderator and the five resource staff, followed by stakeholders attending the activities that day, took turns in signing the joint declaration. That declaration consists of five points on protection, prevention, and/or law enforcement towards illegal hunting and trafficking of protected flora and fauna in West Papua. The event was attended by no less than 80 participants coming from different government and law enforcement institutions, private sectors, and non-governmental organizations.

* The Fleet Command III is one of the main commands of Indonesian Navy, specifically in charge of the eastern territorial seas of Indonesia. The Fleet Command III’s main assignments consists of: To develop the capacity and strength of Integrated Armada Weaponry System; To develop the capacity of naval warfare; To develop the operational readiness to conduct both War Military Operation and Military Operations Other Than War to maintain maritime control, and terrestrial force projection from the sea to uphold sovereignty and law enforcement in alignment with the policy of Commander of the Indonesian National Army, and; To develop maritime potentials in to the country’s forces of defense and security at sea, while positioned under, and answer to, the Indonesian Navy’s Chief of Staff. The Fleet Command III’s headquarter is located in Jl. Yos Sudarso, Katapop, District of Salawati, Sorong Regency.

*** Nikka Gunadharma is the Raja Ampat Communication and Outreach Coordinator for CI Indonesia.