“Wonders of the Night” by Andrew Podzorski

Wonders of the Night 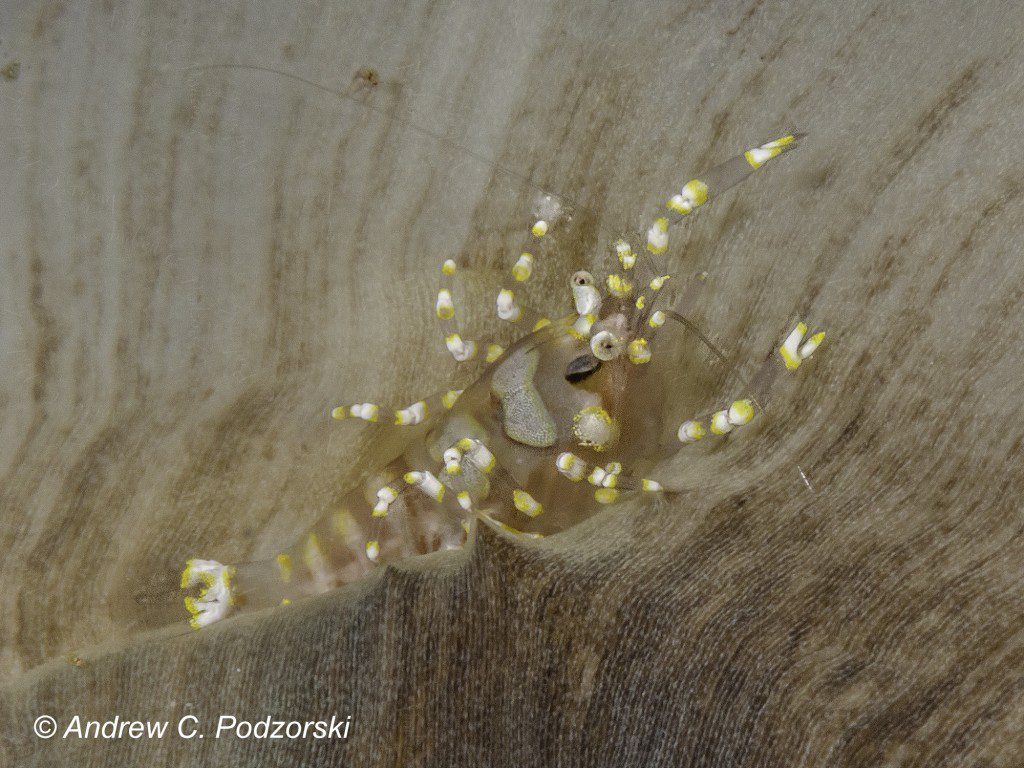 As the sun sinks below the horizon and light starts to disappear from the reef, the denizens of the day seek shelter and protection in the endless nooks and crannied of the reef. The reef becomes quiet. Not much moves. When the last light disappears, the first explorers of the night make a nervous appearance. The certainty of total darkness brings confidence to the most skittish critters. Ever tried photographing Saron or Furtive shrimps not long after sundown? Just be patient, wait that much longer, and they will forget the danger of the light, and you’ll stand a much better chance of catching a good shot. 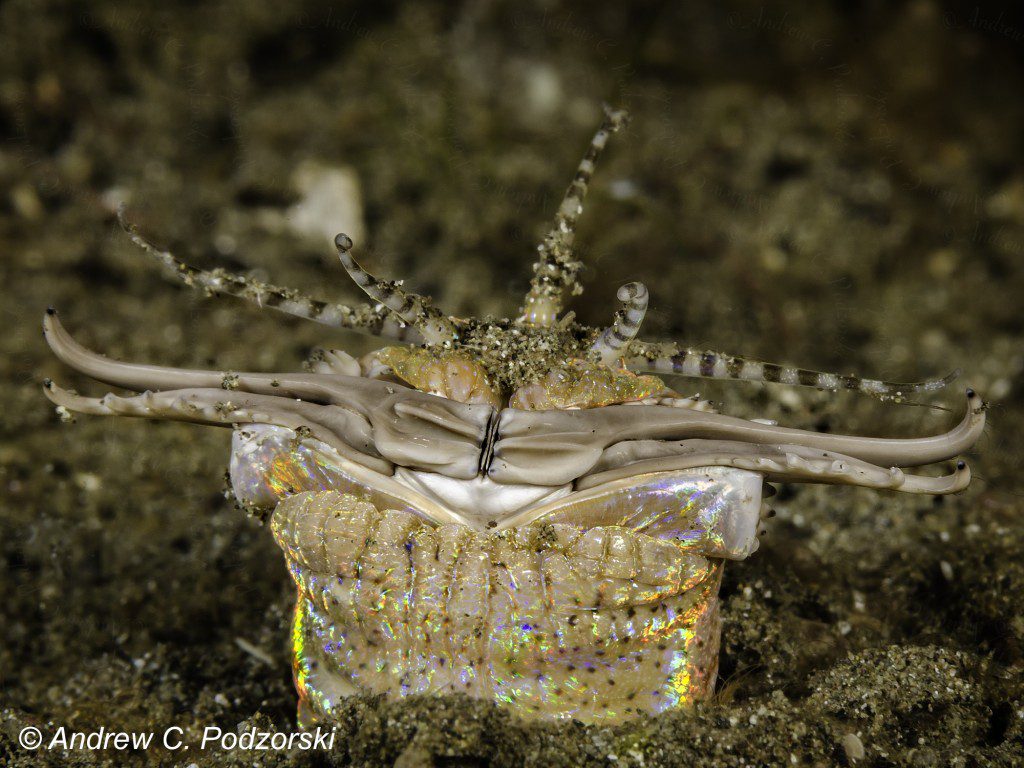 Night diving in Raja Ampat might not in general be the best in Indonesia, but when it is good, it is very good indeed. South Batanta is one of the best areas. Bays with little coral are swept by cool waters from the deep and with their often muddy slopes, form excellent muck dive sites. One location is extraordinary, with Zenopontonia rex (the Emperor Shrimp formerly known as Periclimenes imperator) living on many individuals of Nembrotha, Halgarda and Discodoris. With luck Bobbit Worms (Eunice aphroditois) can be found. Banded Toadfish (Halophryne diemensis) are uncommon but widespread in areas of mixed coral, e.g. Arborek, islets near Pulau Pef, Friwinbonda. Sometimes the large females can be seen with a group of their young. 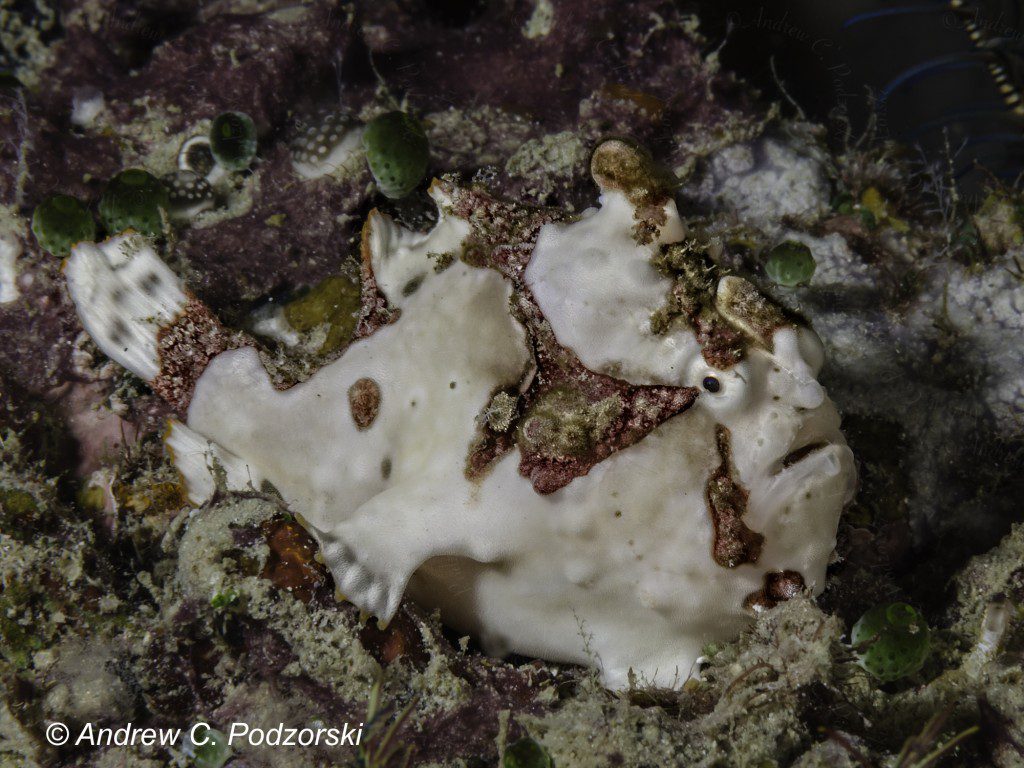 Frogfish are found more in the south as in the image of Antennarius pictus at Teluk Wagmab, though nowhere are they as common as in Lembeh or south of Manado. Different taxa of Egg Cowries are frequently seen feed on various soft corals, while bright red Xenocarcinus spp. wait for their food to swim into them. Decorator crabs are noticeably less common than in e.g. Sulawesi. You do see Cyclocoeloma, Camposcia and other Majid decorator crabs, but only occasionally. What was surprising was that even in areas with a lot of the frondose hydroid Aglaophenia cupressina, Hyostenus bispinosus was usually absent. The walking sharks are unique to West Papua, and when found foraging at night, are a highlight for many. 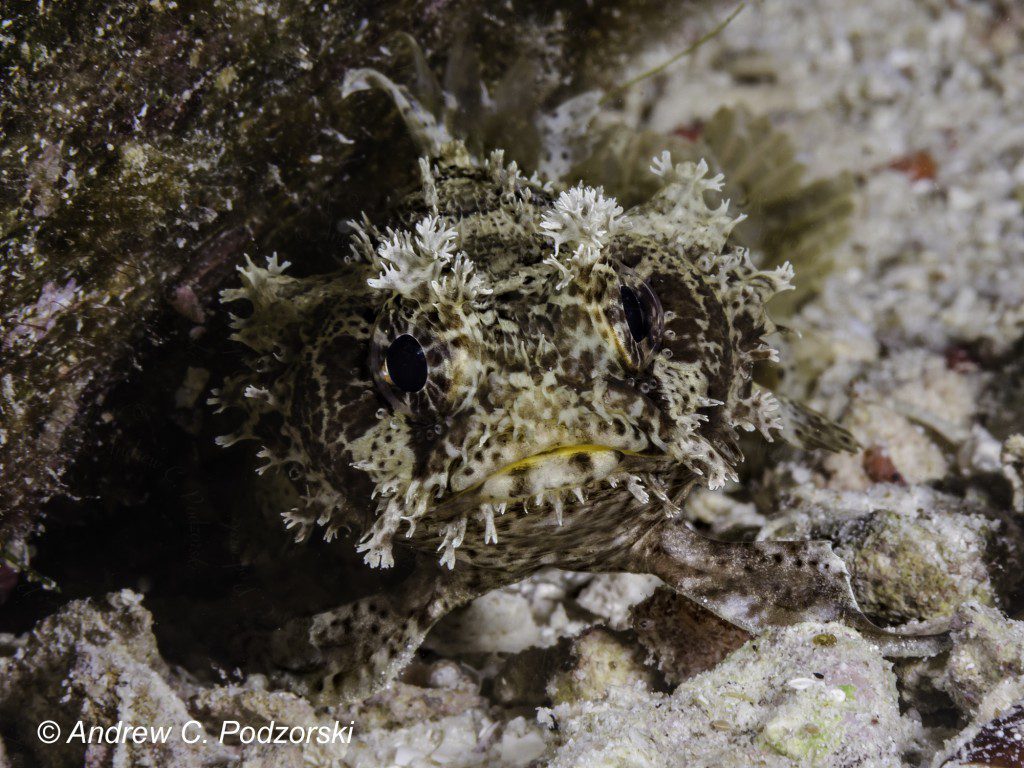 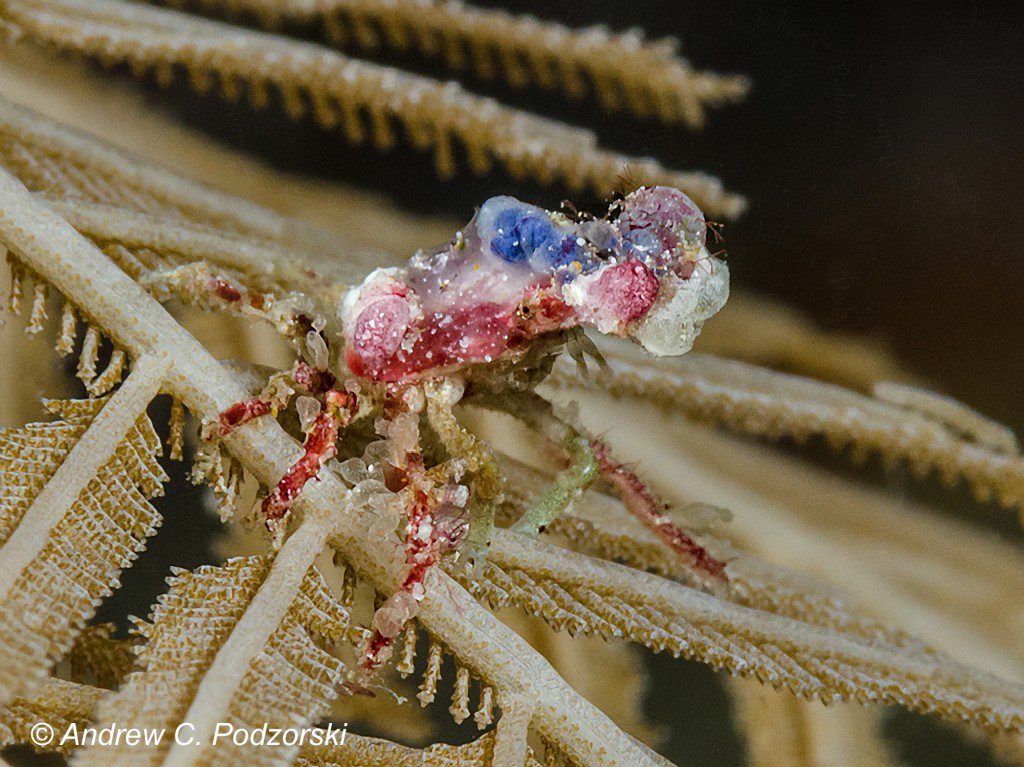 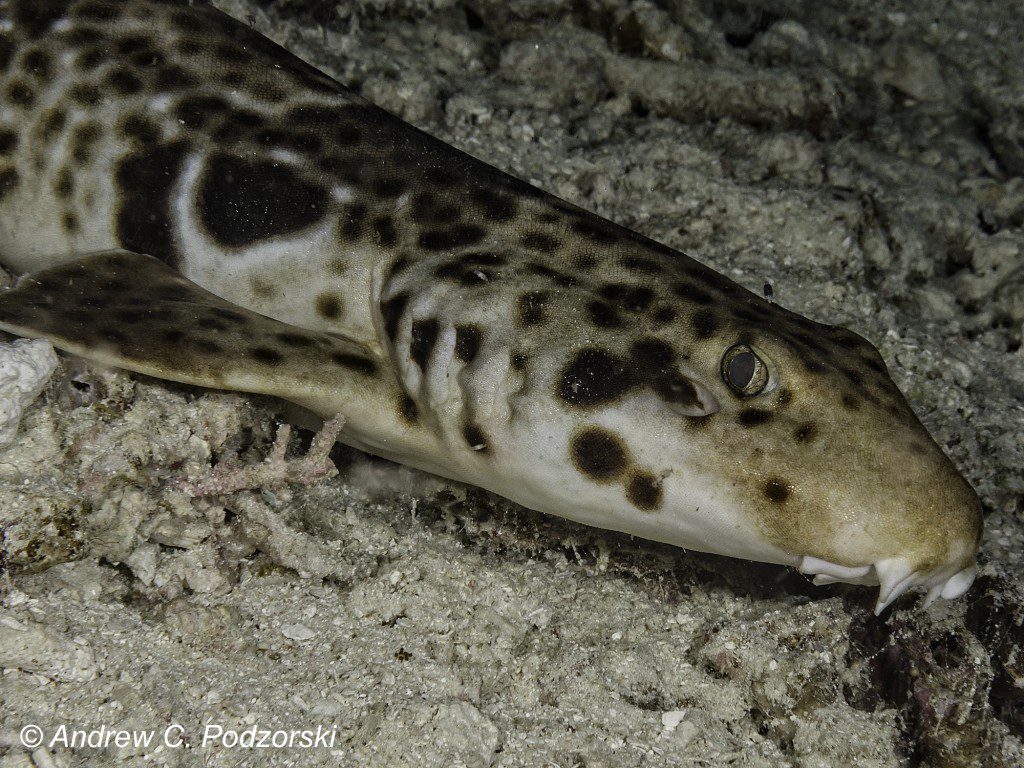 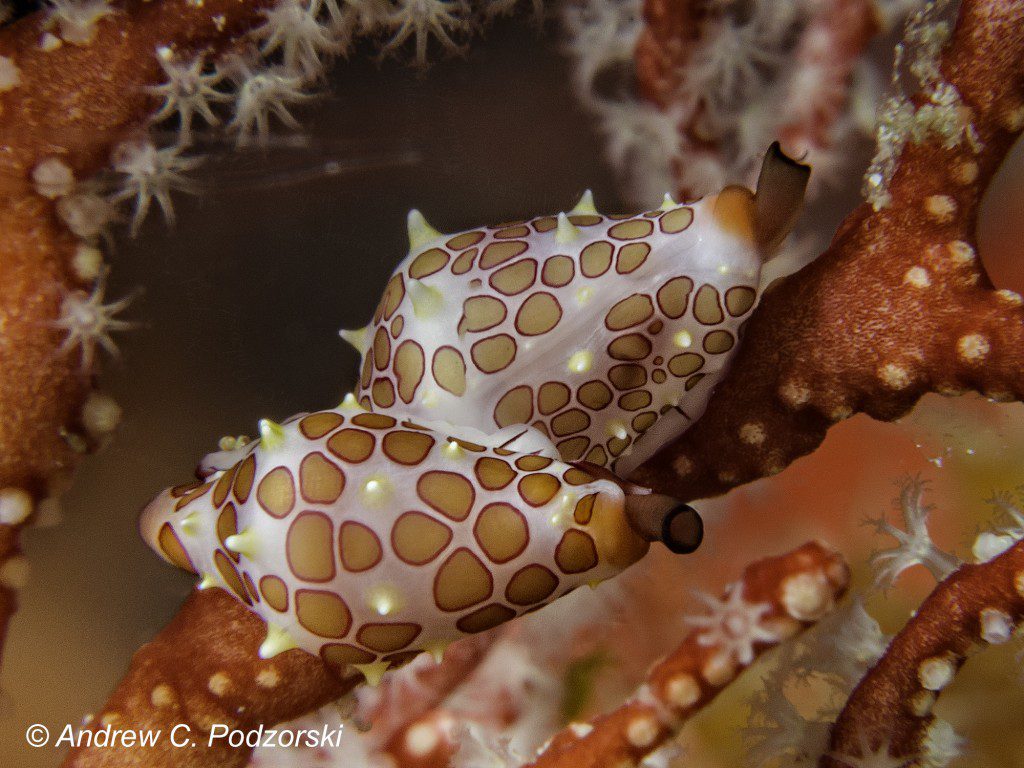 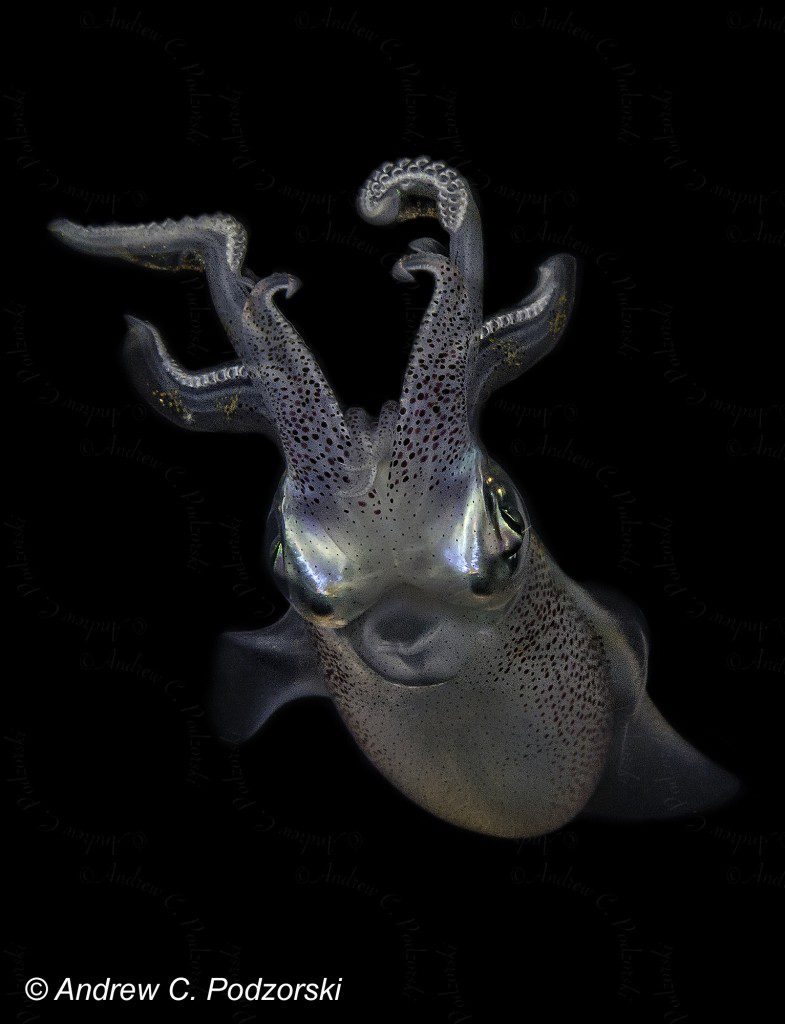 Some divers unfortunately find they have to interfere with reef life at night. They deliberately shine their bright lights on fish near a night hunting Lion Fish (Pterois spp.) so they can see them feeding on the blinded helpless fish. This sad practice has become so common in Arborek, that night dives there are in my opinion, dangerous. The Lion Fish, which are are good 35 cm long, sense divers, and make a bee-line for them. You don’t see them unless you happen to shine a light at them. You might hear their grunting of course. They come so close however, that a sudden movement could easily bring a diver in contact with their toxic spines, especially if you are a photographer. Arborek is not a safe place to be underwater at night.

Administator’s Note:  We have been hearing more and more from divers talking, both positively but mostly negatively, about this practice.  It is not Natural!  Blinding a fish so you can capture a photo of a Lion Fish feeding is not behavior to be encouraged.  Please tell your fellow divers NOT to do this and tell your dive guide this is not a recommended practice!

Born in 1953 on the east coast of Scotland, Andrew Podzorski’s passion for the nature started at four years old. Graduating in botanical taxonomy from Edinburgh, Reading and the University of the West Indies, he researched and published on maritime lichens, African orchids and tropical diatoms. Five years were spent organising scientific expeditions to Malaysia, Sabah, Java, the Philippines, Saudi Arabia, Namibia and Madagascar.

His burning interest in diving was awoken in Jamaica in 1977, and the first underwater photographs taken in 1979. Now specialising in super macro photography, he uses images to highlight species diversity and conservation issues.