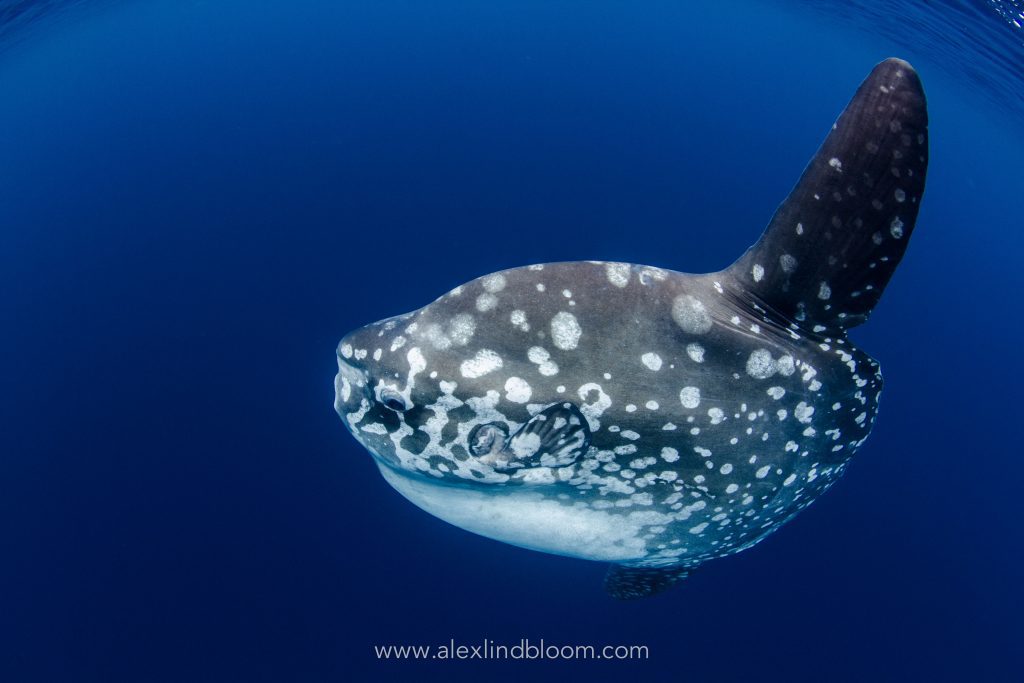 The list of marine species documented for the Bird’s Head Seascape, which includes coral, reef fish, as well as sharks & rays, is the largest in the world. With well over 3000 species, the Bird’s Head Seascape is the epicenter of marine biodiversity. The list isn’t complete however, and it seems to grow a little longer every week with new discoveries, just as it did last week when Raja Ampat’s first ocean sunfish awkwardly paddled by Mermaid II as it sat moored up in the Dampier Straight.

Initially I thought the strange fin wobbling through the glassy surface was another manta as they often feed in this area and we had already seen several. As the mystery fin came closer it was clearly not a manta fin as it was round and moving very differently from a manta’s; possibly a batfish, which often feed on the surface. I made a joke about it being a sunfish, something I’ve never seen in Raja. Just as I finished my quip, the glare from placid water subsided for a moment to reveal the creature responsible for the disturbance in my surface interval nap; it was in fact an ocean sunfish! 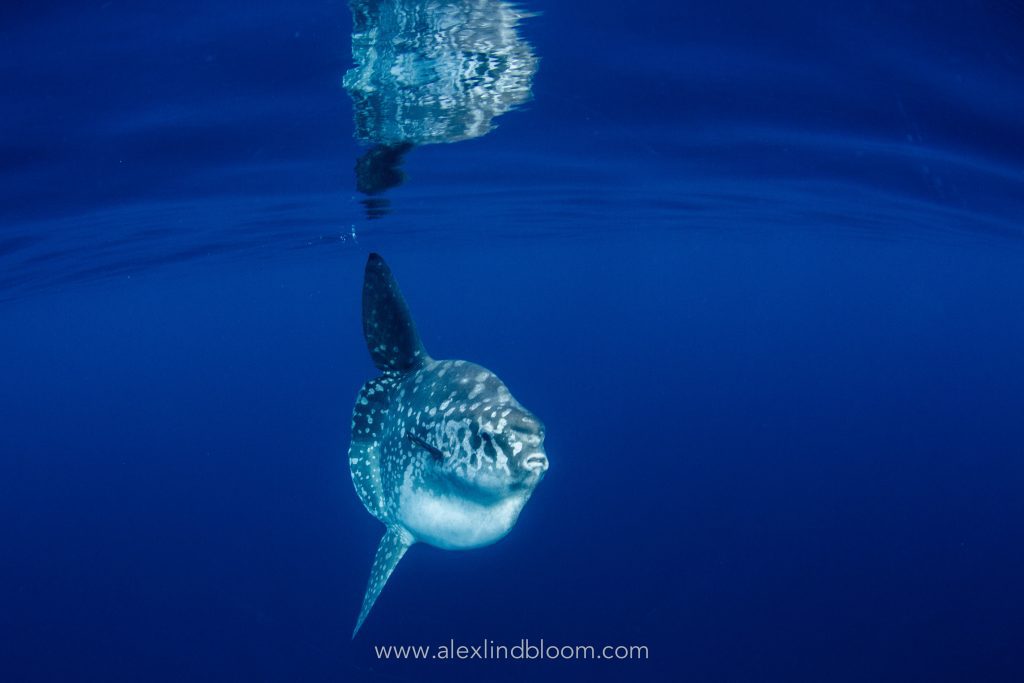 As we had just finished diving thirty minutes before, everyone aboard Mermaid II was dry and fully dressed. Not for long though. Trousers and polo t-shirts were soon strewn about the dive platform and boxers became 100% cotton speedos in a rapid attempt to jump into the water and get a glimpse of one of the ocean’s most unusual species. Turns out we didn’t really need to rush as the fish amicably cruised through the shallow water. With the help of Mermaid’s two tenders, we were able to keep pace with the sunfish as the small boats would shuttle us and drop us in front so we could quietly wait on the surface as it approached. Once it passed us by, we would get back in the RIBs to be positioned again, like a game of Leap Frog. This continued for nearly an hour giving everyone multiple up close encounters.

Sunfish spend the majority of the daylight hours in the deep.  They are what is termed epipelagic, the zone where light penetrates enough for photosynthesis to occur (to ≅ 200m).  They come to the shallower depths at night (to ≅ 50m).  So we were all very excited to find one casually paddling along near the surface in the clear-blue twenty nine degree water. It wasn’t until we started posting the photos online that we realized it was actually the first ever sighting of a living ocean sunfish (presumably Mola ramsayi) in the Bird’s Head Seascape.  This documented siting makes this sunfish species number 1565 on Raja Amat’s fish species list and brings the BHS region’s immense fish species list to 1766 species! 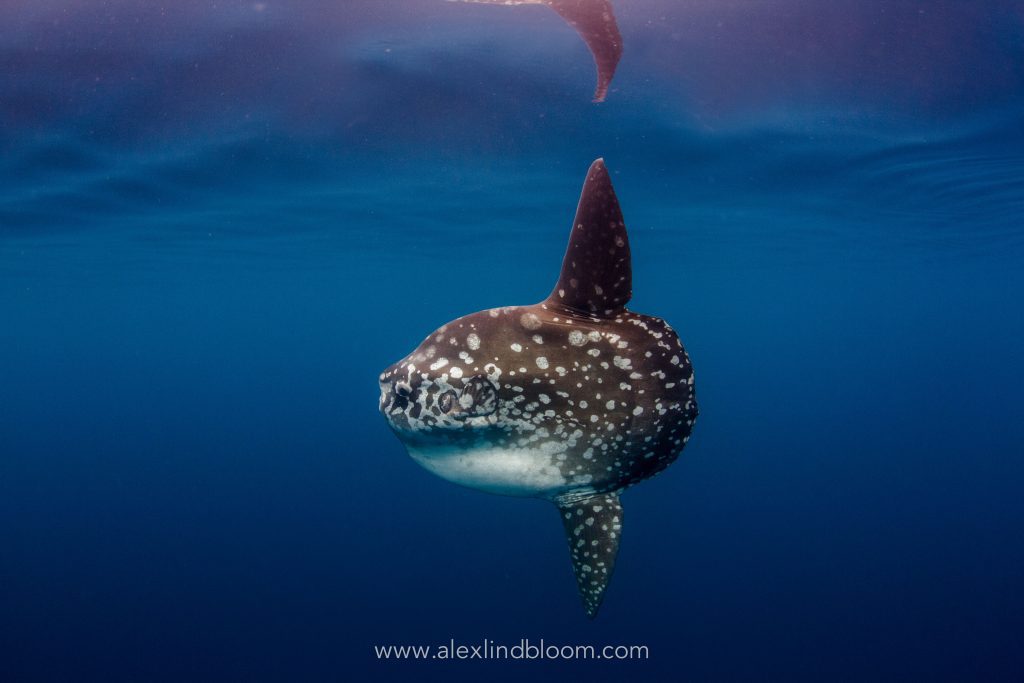 Since there are at least two similar species of ocean sunfish in the Pacific, it is difficult to make a positive confirmation on which species Alex and the Mermaid guests witnessed…so we called in the experts:

She’s a National Geographic explorer, marine biologist and ocean sunfish expert.  To find out more about Tierney and her work with sunfish visit her website, OceanSunfish.org. Tierney has worked in Indonesia on the molas of Nusa Penida.  She and her team have used both satellite and ultrasonic tags to track sunfish not only in Indonesia but also in Japan, Taiwan, South Africa, California and Galapagos to determine the distribution and movements of ocean sunfish around the world. Her work around Nusa Penida has involved satellite tagging sunfish and most recently putting in ultrasonic arrays in and around the region.  This work is funded in part by National Geographic and in partnership with Conservation International and the Coral Triangle Center. For more information on movements of  Indonesian sunfish she suggests reading “Tracking a Marine Ecotourism Star”, Journal of Marine Biology. https://www.hindawi.com/journals/jmb/2016/8750193/ and following the studies of PhD student, Marianne Nyegaard.

According to Tierney, “with regard to species ID, of course it is always best to get a genetic sample for complete confirmation but I would say it certainly looks like Mola ramsayi to me from the outside.”
(This being the same species as found in Nusa Penida.)
“The main (moderately visible) differences between Mola mola and Mola ramsayi are as follows:
Mola mola have rougher skin typically and sometimes a visible reduced band of denticles running between their dorsal and anal fins along the pseudo tail known as a clavus. This band is not visibly present in M. ramsayi. The clavus is supported by 16 fin rays, 12 of which bear ossicles while in M. mola the clavus has 12 fin rays, 8 of which bear ossicles. Mola ramsayi ossicles are situated close together and broader than the spaces between them while those of M. mola are widely separated and less broad than the spaces between them. A larger list of meristic differences is in Matsuura 2002.
(Matsuura, K. 2002. Molidae. Pages 2014-2015 in K. E. Carpenter, eds FAO Species Identification Guide for Fishery Purposes. The Living Marine Resources of the Western Central Atlantic, Volume 3. Bony Fishes Part 2 (Opistognathidae to Molidae), Sea Turtles and Marine Mammals. Rome, FAO.)”