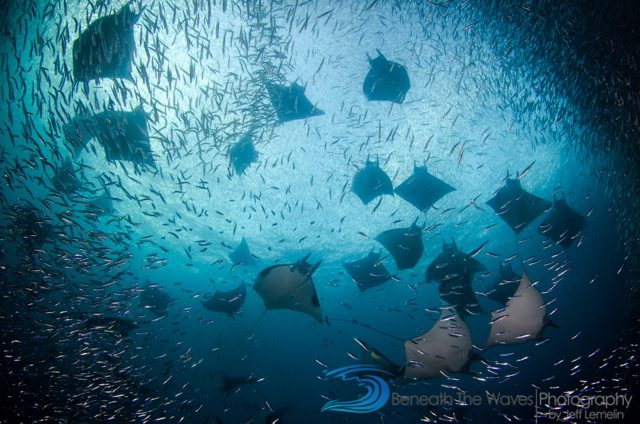 The ocean’s surface was calm with shades of deep blue and green melting together as our tender headed to the dive site in Misool, Raja Ampat. I realized that it had been a year since my wife and I had our last dive. We were excited, full of anticipation, but had no idea that we were about to back roll into the best dive we have ever done in our lives. 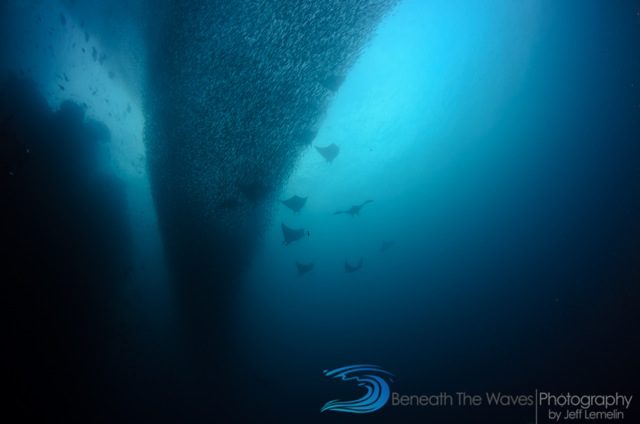 As we hit the water we prepared to battle the currents that were ripping through the rocky out-cropping’s of the dive site, Three Rocks, near Farondi Island.  Gazing in wonder, we suddenly realized we were engulfed by a”bait ball” the size of a large house. A down current was pushing us deeper toward the ocean floor, while the mob of bait fish was turning the clear blue water into black clouds as the fish enveloped us. 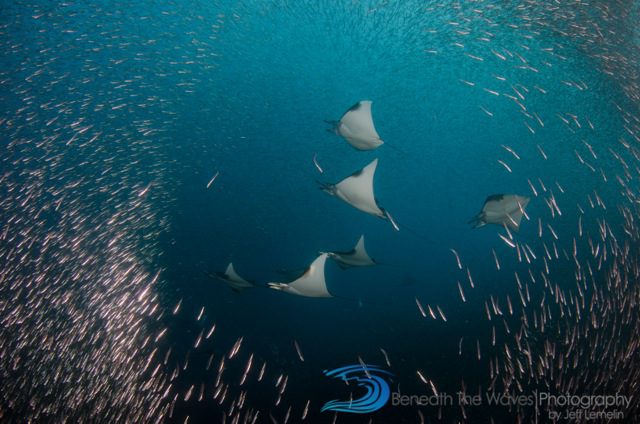 Next we noticed the mass of fish was being hunted by droves of Mobula Rays, too many to count. The rays, hunting like stealth fighters, tactfully worked as a team herding the droves of the anchovies into a tight ball.  We could hear the fish cavitate the waters around us as they tried to escape the ray’s onslaught. The mobulas swam back and forth causing the anchovies to get thicker and thicker; then suddenly the entire squadron would attack, decimating the fleeing fish. As the fish scattered you could see the mobula rays and the sun piercing through the bait ball. It was the best diving we have ever had…so far! 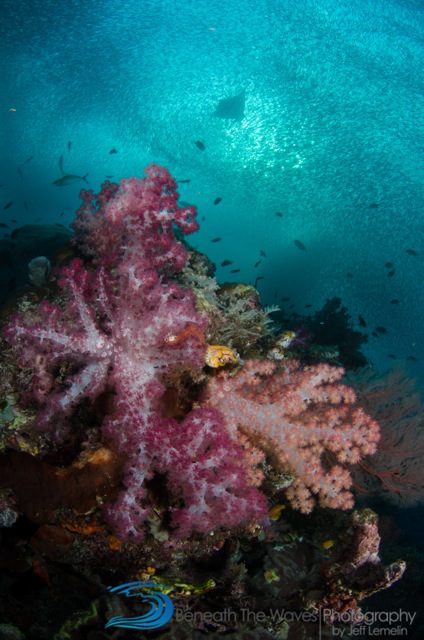 Jen and I would like to thank Got Muck for organizing our “best trip ever” and the staff and crew of the live-aboard Dewi Nusantara for providing a wonderful platform for this unforgettable journey.

An avid northern California surfer for 20 years, Jeff Lemelin discovered the spectacular beauty of what lies beneath the waves when he learned to scuba dive in Thailand in 2005.
Since then he, and his wife Jen, have enjoyed traveling to remote regions of Indonesia and the South Pacific searching for waves and underwater seascapes.
Jeff and Jen live nestled in the hills on a garden oasis between Santa Rosa and Calistoga, California with their two couch-potato pugs, chickens, and beehives.

To see more of Jeff’s images visit his website, Beneath The Waves Photography.