Life on a (Sea) Pen by Maurine Shimlock and Burt Jones 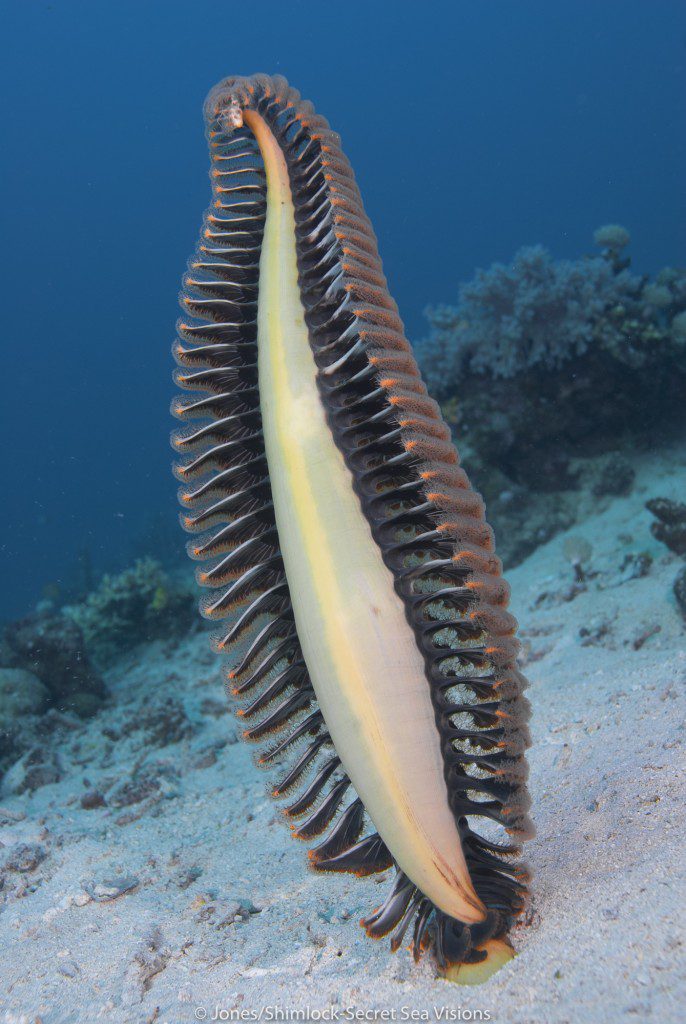 On one of my first night dives “many” years ago, I saw what looked like a feather or an old-fashioned quill pen sticking out of the substrate.   Being a novice diver, I was so overwhelmed by all the new life forms encountered after dark that I didn’t give it much thought.  But as I began seeing more and more of these novel creatures, I took notice and learned they were Pennatulaceans, commonly referred to as Sea Pens.

Sea Pens belong to one of the 16 families of octocorals. They live in soft-bottomed habitats; most species are found in the deep ocean.  To protect themselves, they are able to withdraw their bodies into the substrate at night, when predators are more numerous.  So even the shallower waters species are seldom seen during the day except at feeding time when a current is flowing.  The central featherlike stalk and side branches constitute a single primary polyp.  Secondary polyps, with eight tentacles (octocorals have 8), extend from the side branches of most species.  There are some species, however, with no branches; their polyps extend directly from the central stalk.  These species look more like a bottlebrush than a feather.

Sea pen polyps have specialized functions; some contain nematocysts used for feeding, others for reproduction, some are used to operate the polyp’s hydraulic system allowing the animal to expand into the water column or deflate beneath the surface.  Highly variable in color and size, sea pens anchor themselves in the sand by inflating a bulb at the tip of their central stalk.  Like weather vanes, sea pens rotate on their central axis to present the largest possible area to the planktonic-rich current.  Because they live on semi-featureless bottoms, sea pens are often the only shelter in the area for juvenile fish or small invertebrates.

The images below are a sampling we have photographed over the years in the BHS.  The next time you see a sea pen alone on the substrate, take a closer look. The variety of animals that shelter among the sea pens will amaze you. 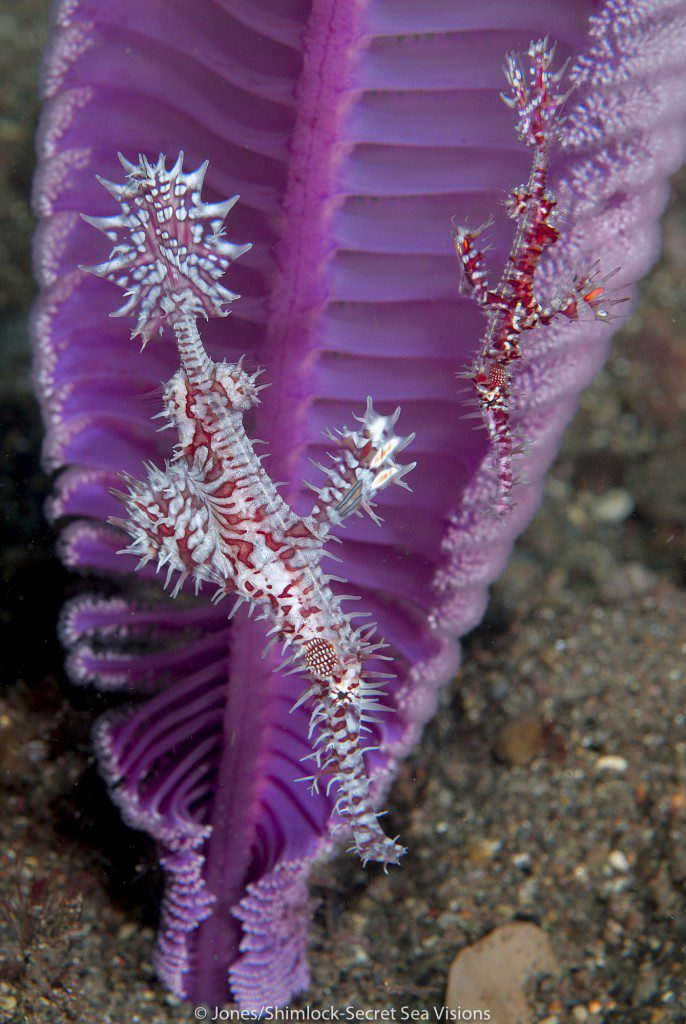 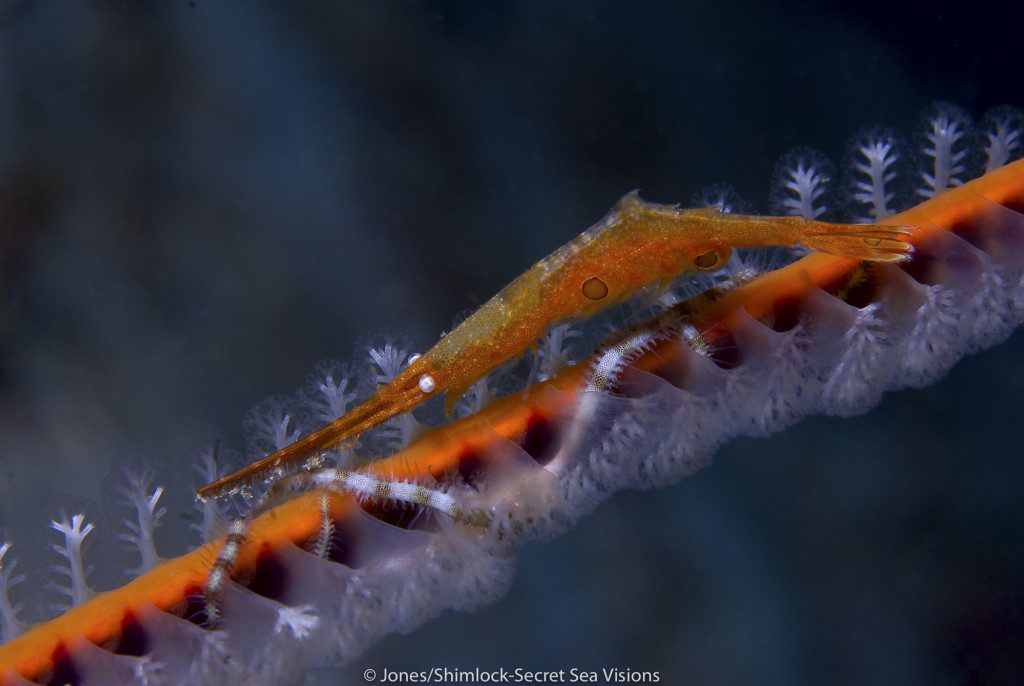 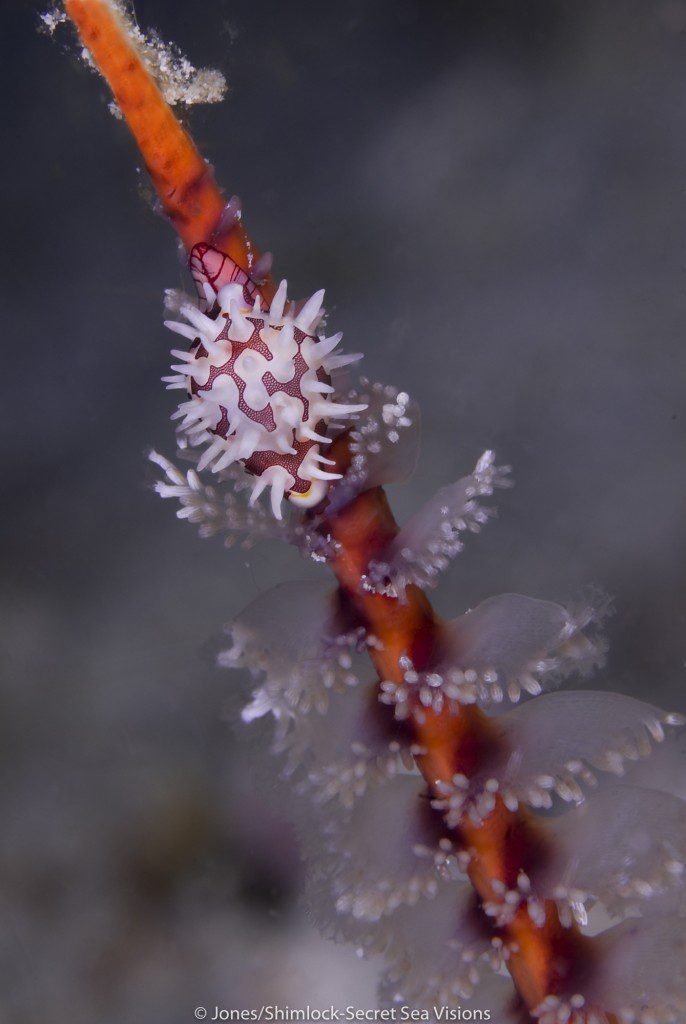 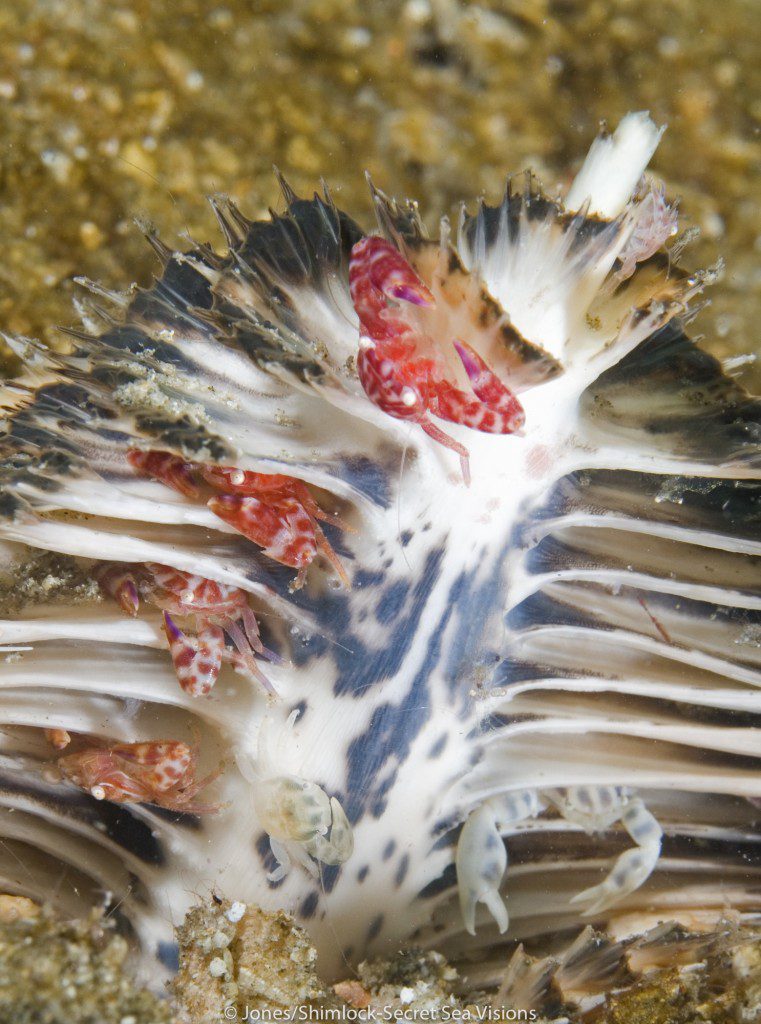 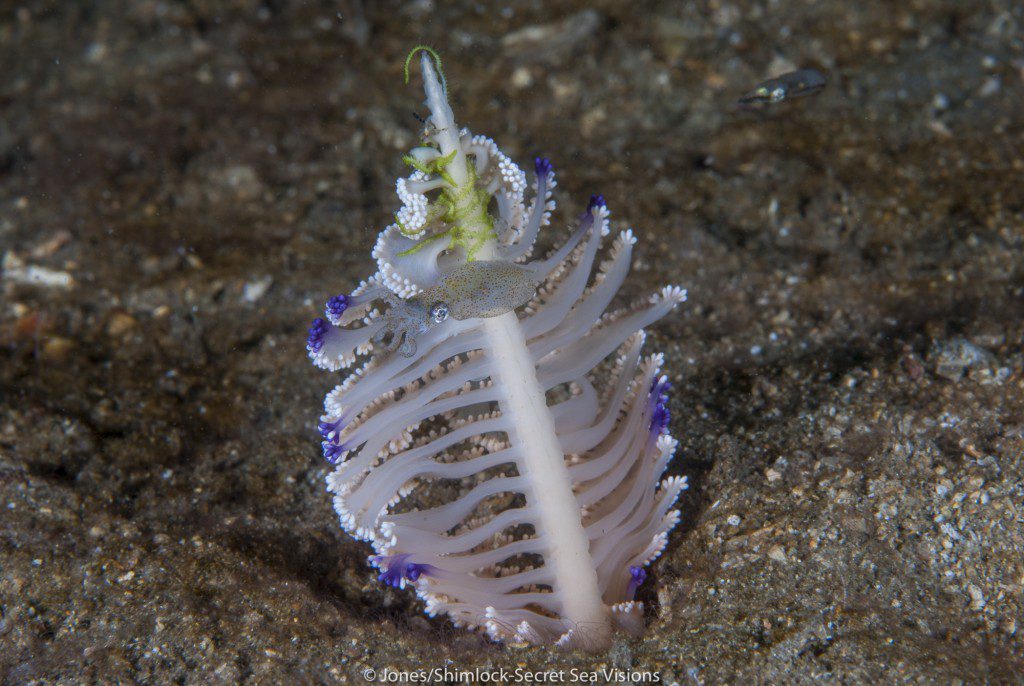 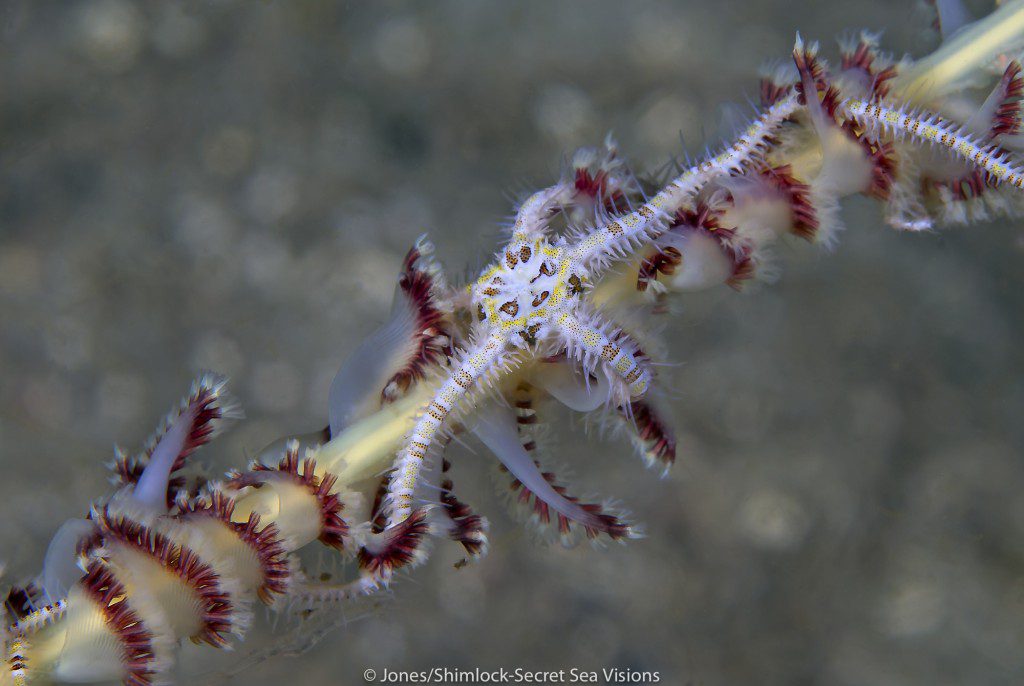 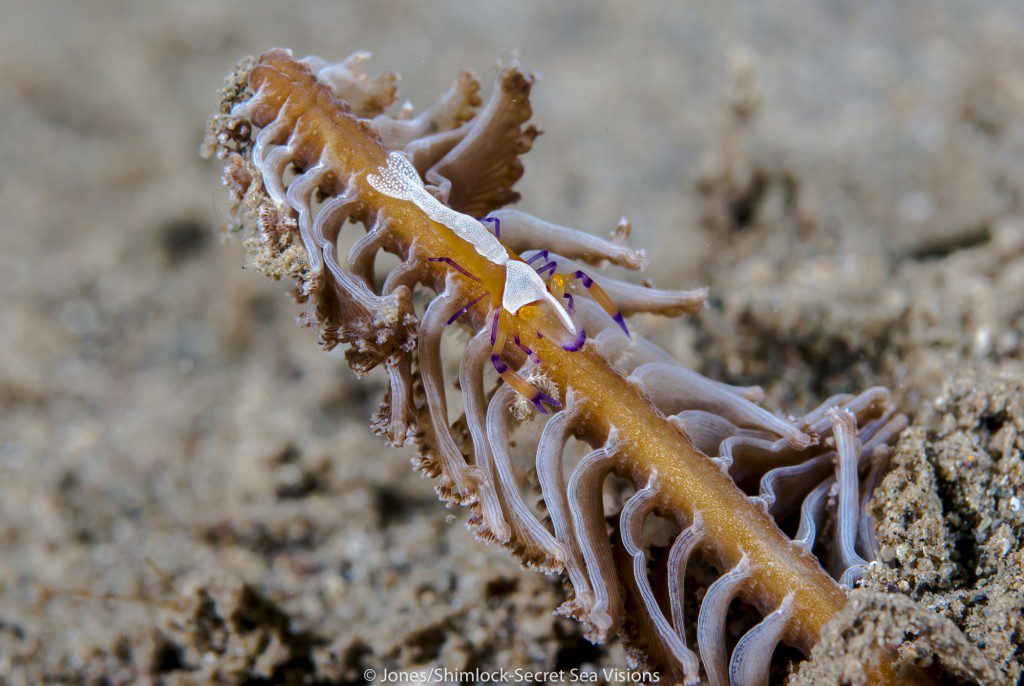 Maurine Shimlock and Burt Jones are marine life photojournalists. They have dived extensively in Indonesia and throughout the Bird’s Head.  They are this website’s co-creators and administrators.  To view more of their work visit their website, Secret Sea Visions.