For many people, one of the main attractions of the Bird’s Head Seascape is the pygmy seahorse (well I like to think so at least). Certainly, Raja has amongst the highest density and diversity of these diminutive fishes on the planet. If you haven’t seen one yet, they almost defy belief. It is easy to list any number of unusual features about them: a horse-like head ending in a puckered mouth, a monkey-like prehensile tail and eyes that move about independently. From the tip of its pug-like snout to the tip of its stretched out tail, the largest can only just reach across a US quarter. Even stranger than all of this is their reproduction where extraordinarily devoted fathers become pregnant and strict monogamy is exhibited between life-long partners.

I was recently on a trip exploring Raja Ampat aboard the Arenui, joining a cruise as resident pygmy seahorse expert. Several years ago, I completed the first research on the biology of pygmy seahorses for my PhD thesis and was excited to spend a trip dedicated to these miniature fishes. Five of the six described species of pygmies have been named since the turn of this millennium, which explains why there has been so little research on them. During the trip aboard Arenui, I gave a series of lectures about my findings and the area’s astounding marine life in general. We were lucky to see three of the area’s four species during the trip and there was great engagement from the guests who enjoyed hearing of the soap opera-like social lives of pygmies.

Bargibant’s (Hippocampus bargibanti)| Bargibant’s pygmy was the first species to be discovered. Georges Bargibant, a researcher at the Noumea Museum in New Caledonia accidentally found the first pair when he collected a gorgonian coral for the museum’s collection. The species was named after him in 1970, but divers weren’t regularly seeing them until the 90’s. Bargibant’s pygmies only live in association with Muricella gorgonians and are covered in tiny bumps that mimic the coral’s closed polyps. 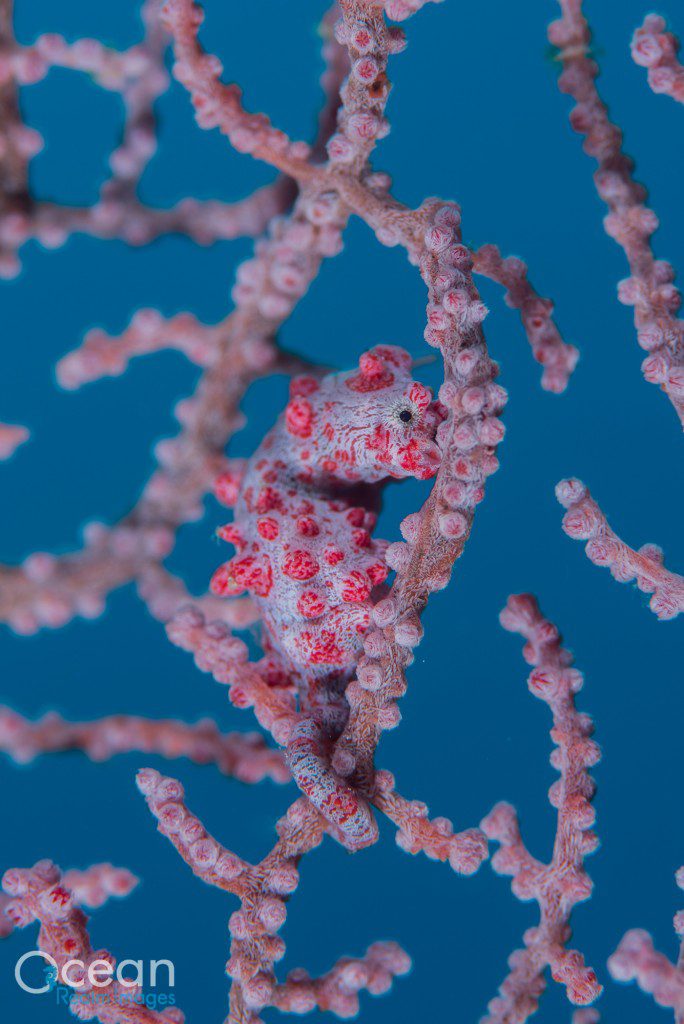 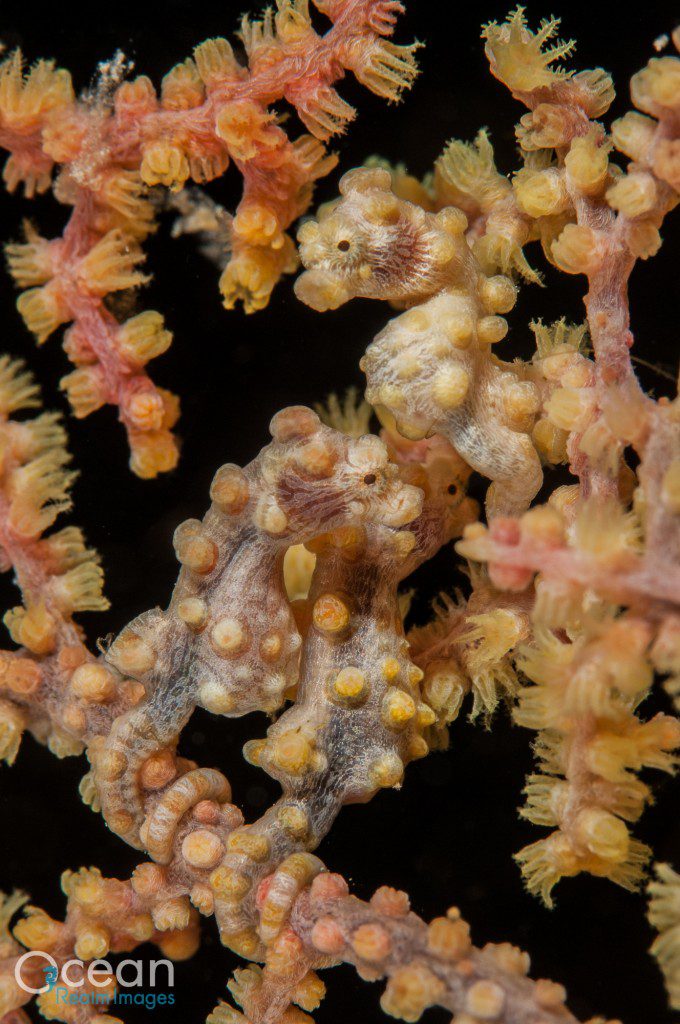 Denise’s (H. denise)| This is another gorgonian-living, and commonly seen species in Raja Ampat. They can be distinguished from the closely related Bargibant’s species, by their more slender shape and longer snout. They are also much more cosmopolitan than Bargibant’s: so far I have found them living on ten different types of gorgonians. As a result of them inhabiting such a variety of habitats, their colours and surface textures are much more variable than Bargibant’s. I have seen various hues of yellow, red, pink and even white. Raja Ampat is also known for an, otherwise rare, red and white variety that inhabits Melithaea gorgonians. 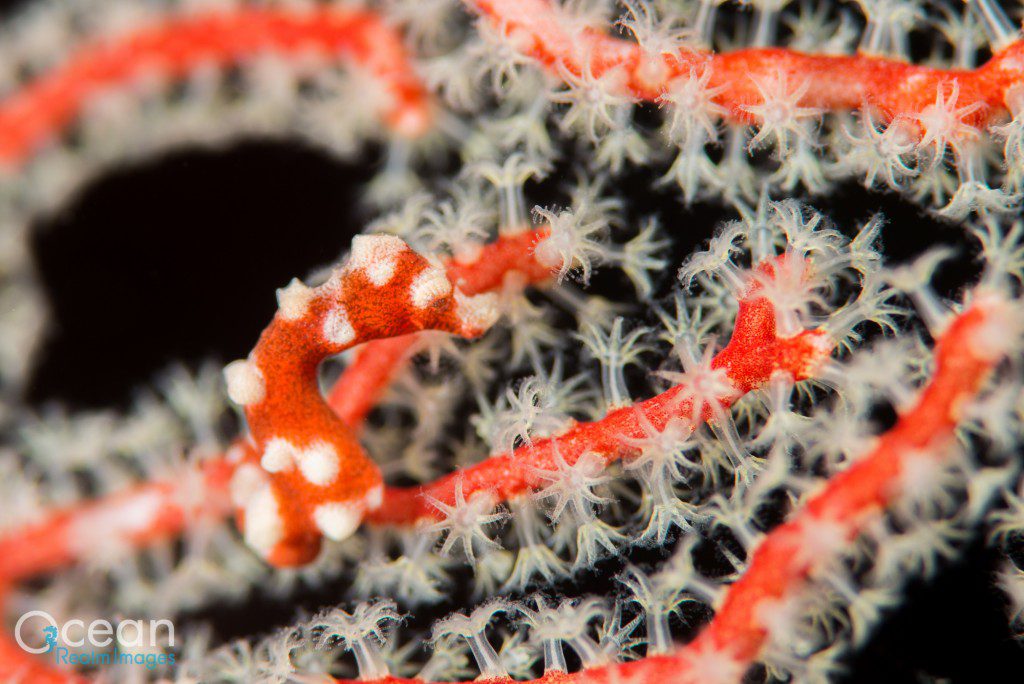 The red and white colour form of Denise’s pygmy seahorse (Hippocampus denise), which is common in southern Raja Ampat. 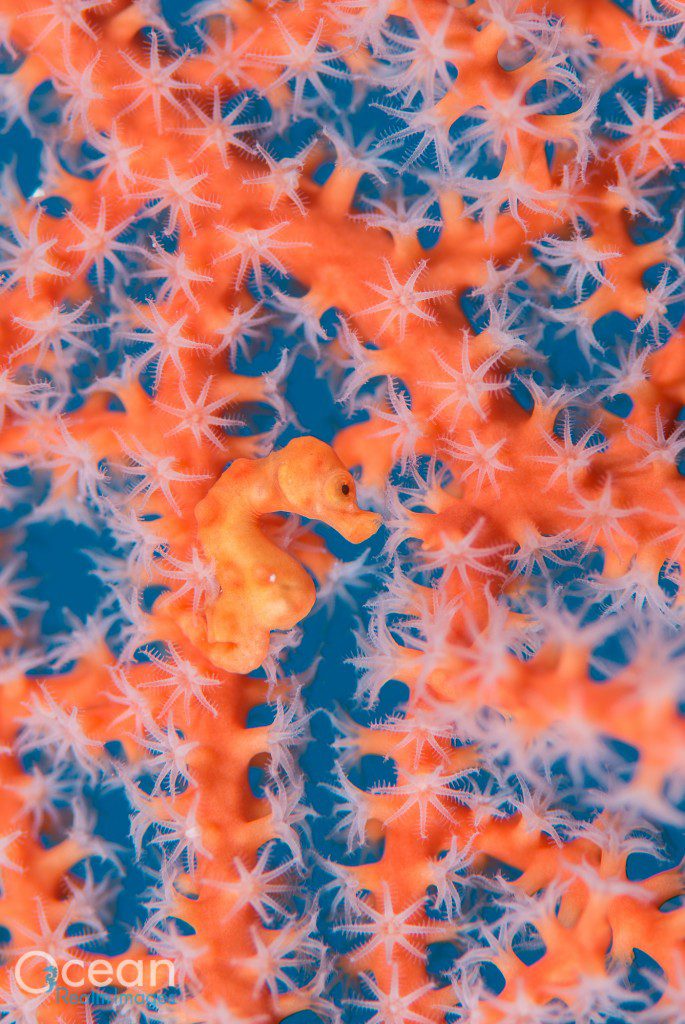 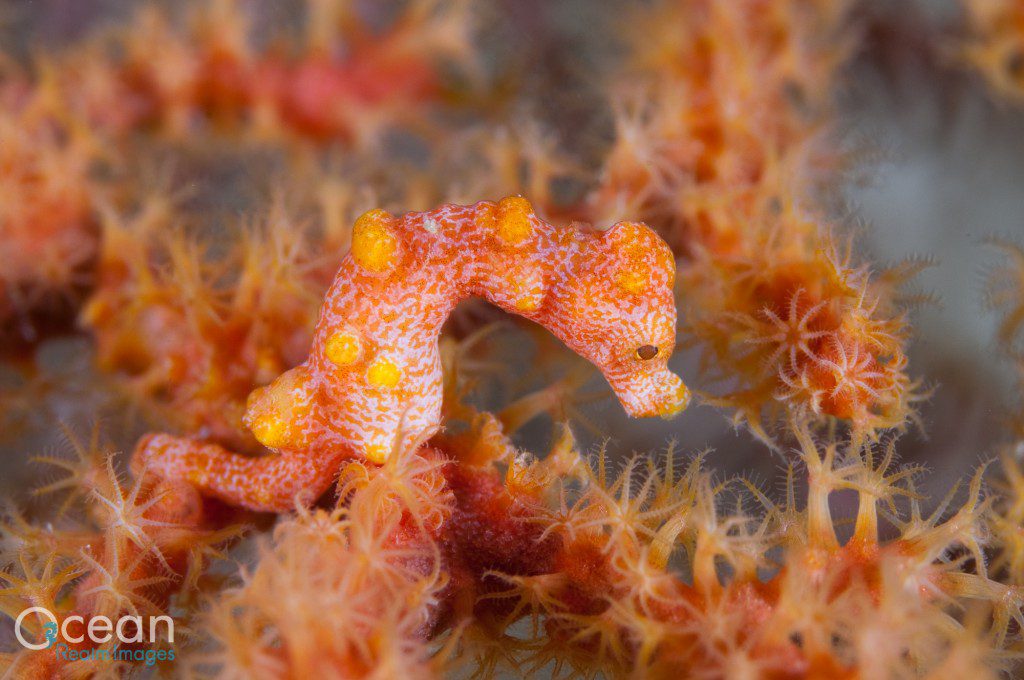 Of the ten types of gorgonians that I have found Denise’s pygmy seahorse living with, I have seen three of them exclusively in Raja Ampat.

Pontoh’s (H. pontohi)| In 2008, the two species of free-living white and brown pygmies were given the names, Hippocampus pontohi and H. severnsi respectively. However, it appears that scientists may have jumped the gun. Genetic evidence has since shown that they actually represent two colour forms of a single species. The name ‘Severn’s’ is being dropped and Pontoh’s will be retained into the future. Like many seahorses, this new evidence shows just how much variability there can be within a single species of seahorse. Camouflage is so important to pygmies that they generally match their surroundings very closely. White ones are most often seen around Halimeda algae, and brown ones around hydroids. 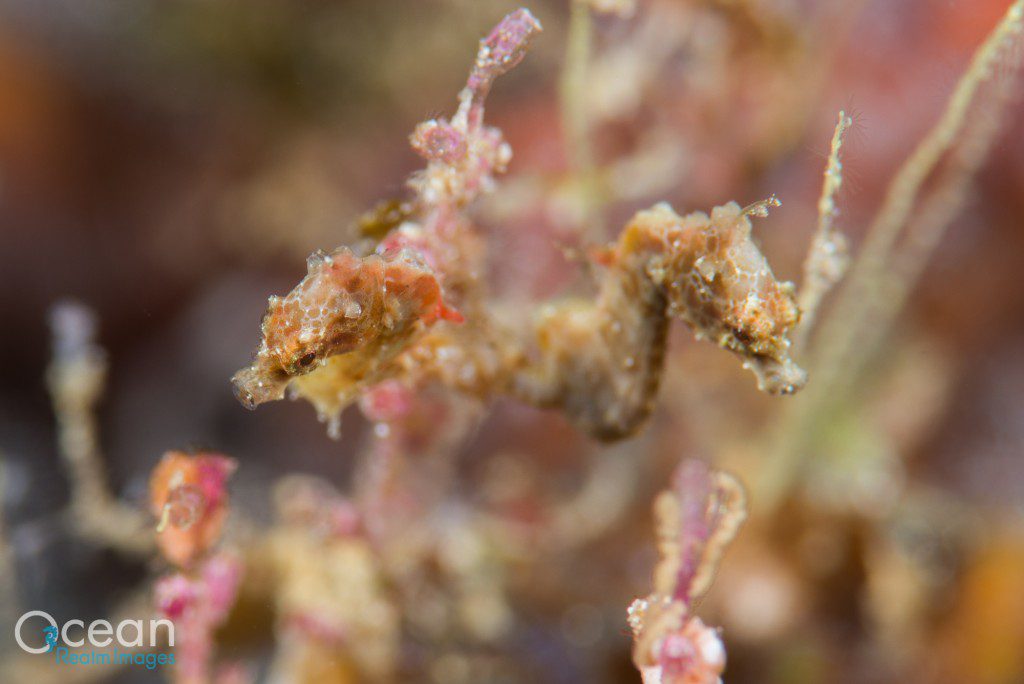 Satomi’s (H. satomiae)| This is the least common of the Bird’s Head’s pygmies, and in fact is currently only known from Indonesia. It is also the smallest pygmy, not even reaching across a dime. Very little is know about this species, but it seems to become active around dusk and is generally found slightly deeper than the other free-living species. When I have seen them, they’ve often been attached to soft corals and hydroids beneath a large over hang. There are beige and dark brown colour forms, and all are very active swimmers. 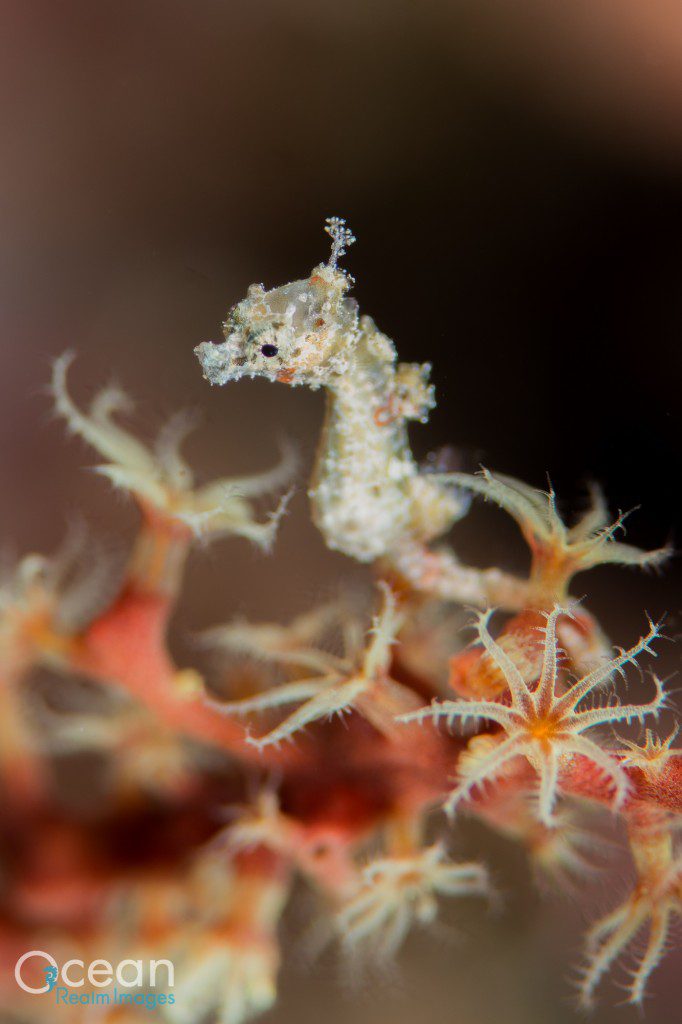 Satomi’s pygmy seahorse (Hippocampus satomiae) is the rarest species, and also the smallest. Very little is known about this species that reaches a maximum of 1.4 cm in length.

Sometimes it can a bit of a double-edged sword leading a trip that encourages people to interact with and photograph pygmies. I am always very keen to encourage non-invasive interactions where we can enjoy and capture images of them, without causing stress or harm. The take-home messages I hope to promote are there should be absolutely no touching of the pygmy or their gorgonian, and to limit the number of strobe-lit images. In fact, this subject was part of my PhD research and the findings are available as a code of conduct document that helps us to avoid certain behaviours that cause direct stress to the fish.

Relatively recently Project Seahorse, the world’s largest seahorse conservation organisation, began a citizen science initiative called iSeahorse. This is designed primarily for who are able to record their seahorse sightings. This includes pygmy seahorses, and the big ones too. Next time you are diving and spot a seahorse, please record and log your observation. You can check out the website to learn about the kind of information that is valuable to them. I used iSeahorse to register my find of a Bargibant’s pygmy near Tokyo, which extended their known geographic range by hundreds of miles northwards.

Raja Ampat is one of the few pleases where you can see four of the six species of pygmy seahorse. It’s hardly surprising, given the extraordinarily high biodiversity of the area and it’s fantastic level of protection. Just remember, whilst enjoying pygmy seahorses please ensure not to disturb them.