Continuing with our celebration of the first year of the site we are revisiting the most popular posts of the past year.  This was the most popular post in the Diving blog.  And it’s a great one.  If you already saw it great, pass it on to a “friend”.  If not, it’s a MUST view! 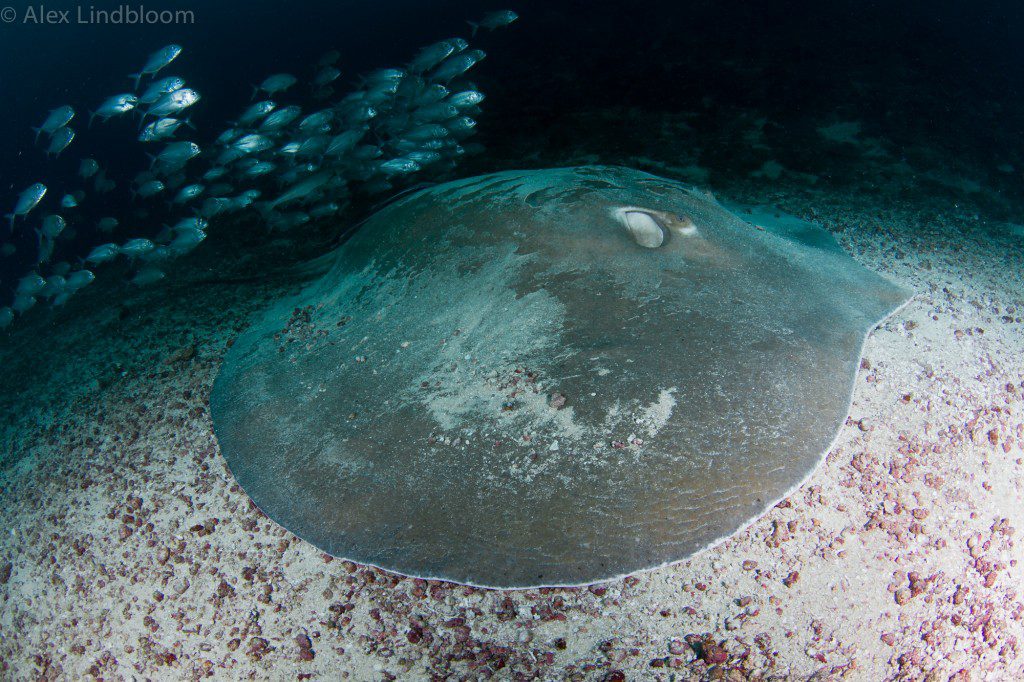 I’m a photographer for Mermaid Liveaboards, in April of 2014 we were diving at the dive site called Blue Magic in the Dampier Strait. For those of you who have never dived Blue Magic, it’s a sea mount that attracts a myriad pelagic species, including large numbers of oceanic manta rays, as well as many wobbegong sharks and several different species of pygmy seahorse. It can be one of the best dives of your life, proving all the catch phrases about Raja Ampat’s astounding biodiversity (I had to ask the dive guides on my boat if there were actually pygmies because I’ve never seen one at Blue Magic. I mean who has time for pygmies when five-meter-wing spread mantas are cruising in and out of a giant ball of big eye jacks?). The current was ripping on April 15th, as it does quite often at all of the sites in the Dampier Strait. I’ll admit that at the time I was a bit disappointed because I had just swam around the entire site, fighting the current most of the way, hoping that I would find the oceanic mantas at cleaning stations like they had been the week before. But at thirty something minutes into the dive I hadn’t seen any sign of them. Looking back I had no reason to feel disappointed in the dive, the wobbegongs were abundant, along with a grey reef sharks patrolling the edges of the site. Four months in Raja and I was already spoiled by the superlative diving. 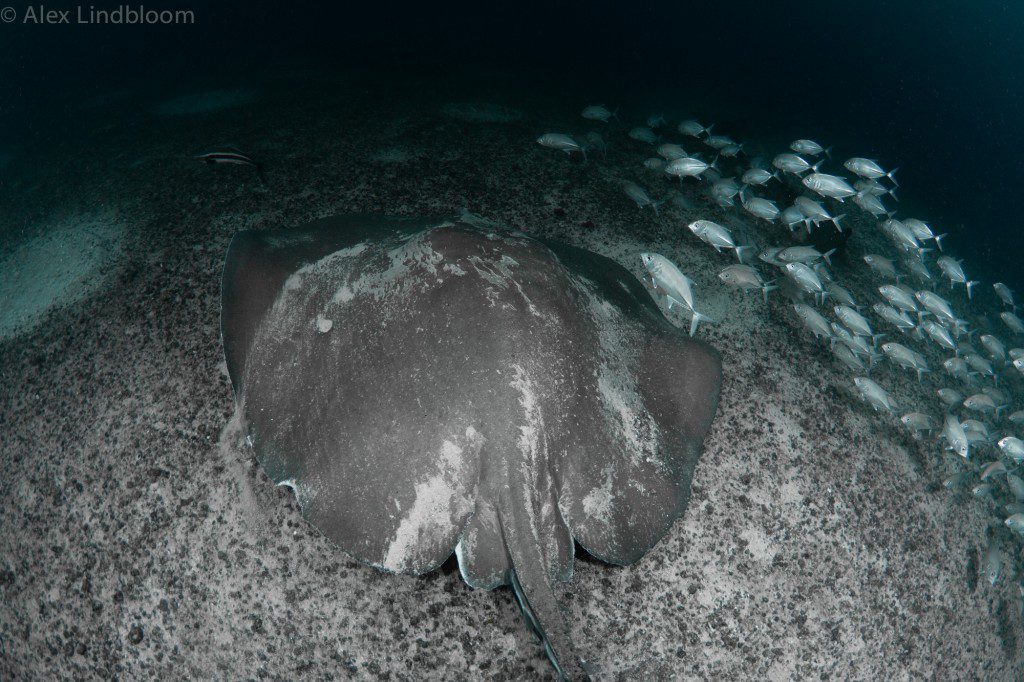 I was on the top of the site just about to start my ascent and running low on air after swimming like a crazy person in my manta quest when one of our dive guides excitedly called me over. He was very much up current from me and I was more than hesitant to make the swim with my remaining fifty bar of air, but I didn’t want to miss anything. I must have looked like one of those cartoon characters whose legs move in a blur but gain zero forward movement. Ten bar and one leg cramp later I reached him and was less than pleased that he was trying to show me the giant school of jacks I’d been photographing during the first part of my dive. I pretended to take a photo so as not to be rude and gave him the ‘OK’ sign and was just about to turn and drift away with the current when the school of jacks parted and revealed what he was really pointing at. 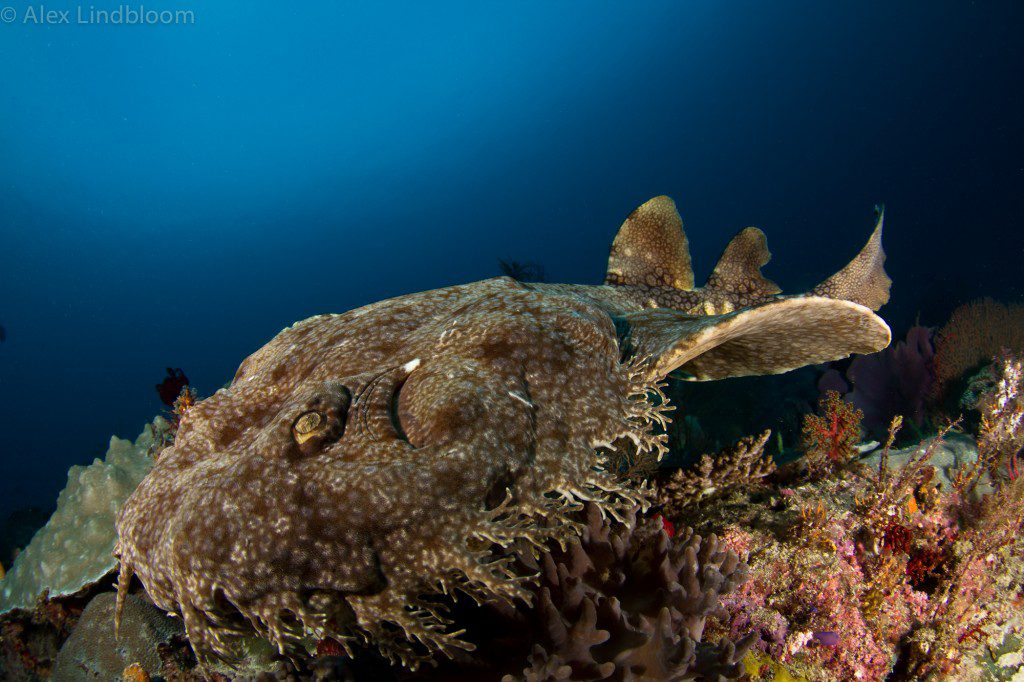 When you see an animal like a manta ray or a whale shark, an animal that you expect and know to be big, the fact that it’s really big seems normal. But when you see a similar animal several times larger than expected, it is shocking. I was completely gobsmacked when the jacks parted to reveal what I felt at the time was the biggest animal I’ve ever seen underwater – a massive stingray. Sitting below the jacks at about thirty meters was what I believed to be the spawn of some interspecies cross breeding phenomenon between a giant Pink Whip Ray “on steroids” and an oceanic manta, because this thing was huge! I remember filming it from some distance, thinking that if I got too close it would move away as most of the larger stingrays in my experience have done. As I drifted closer and closer it didn’t exhibit the normal behavior of a pissed off stingray and I ended up kneeling less than a meter in front of it thinking, “holy s#!t you’re big”. 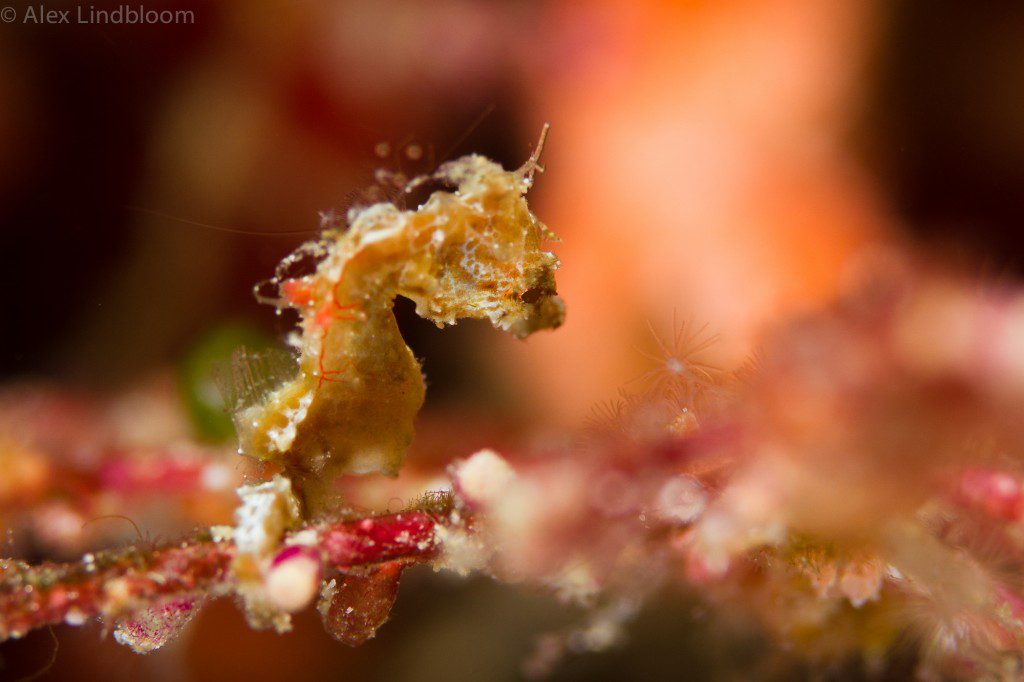 Most stingrays lay relative flat, with the top of their eyes at the highest point, usually only a few centimeters off the substrate. But this specimen’s eye area rose about a half meter, if not more, off the bottom. We calculated the disk width to be roughly three and a half meters and from the tip of its tail to its pointed snout we estimated about six meters. The barbs on its tail looked more like circus tent stakes than the barbs of a stingray. And, yes, I kept my distance! With my air running very low and thirty meters of water between me and the next available air source, I quickly snapped several photos of the giant stingray and started on my ascent. For as long as the visibility allowed I kept my eyes fixed on this unusually large animal, wondering if I would see it again and wishing I could have had more time with it, but feeling incredibly lucky at the same time. 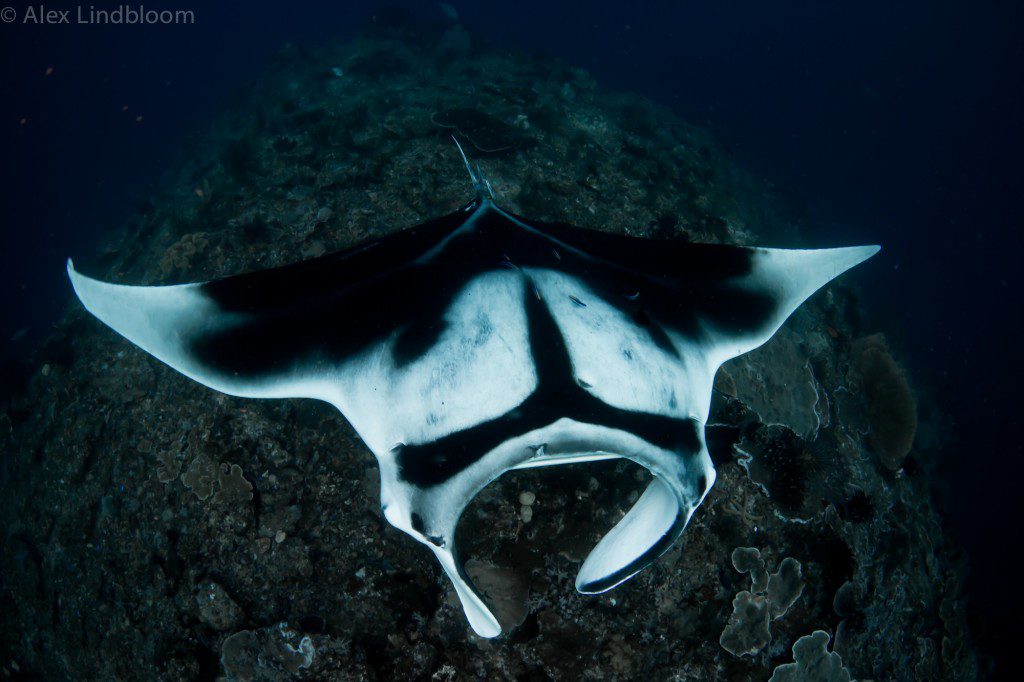 Back on my boat, Mermaid II, I posted several of the stingray photos and quickly had a response from a diver friend who told me to contact Dr. Mark Erdmann, Conservation International’s Vice President for Asia Pacific Marine Programs, because he had also had a large stingray encounter at Blue Magic several months back. I sent Dr. Erdmann an email and his response shocked me. He seemed to be more excited than I was by the stingray because he knew what it was, which was not a giant Pink Whip Ray but what he believed to be a new and undescribed species. Based on the photos that I had taken, it became clear that Dr. Erdmann’s encounter several months ago with a large stingray was in fact that same individual. Not only did Dr. Erdmann believe this ray was a new species, but based on his wealth of knowledge in the area of sharks and rays, Dr. Erdmann also believes that it is the largest living stingray in the world! 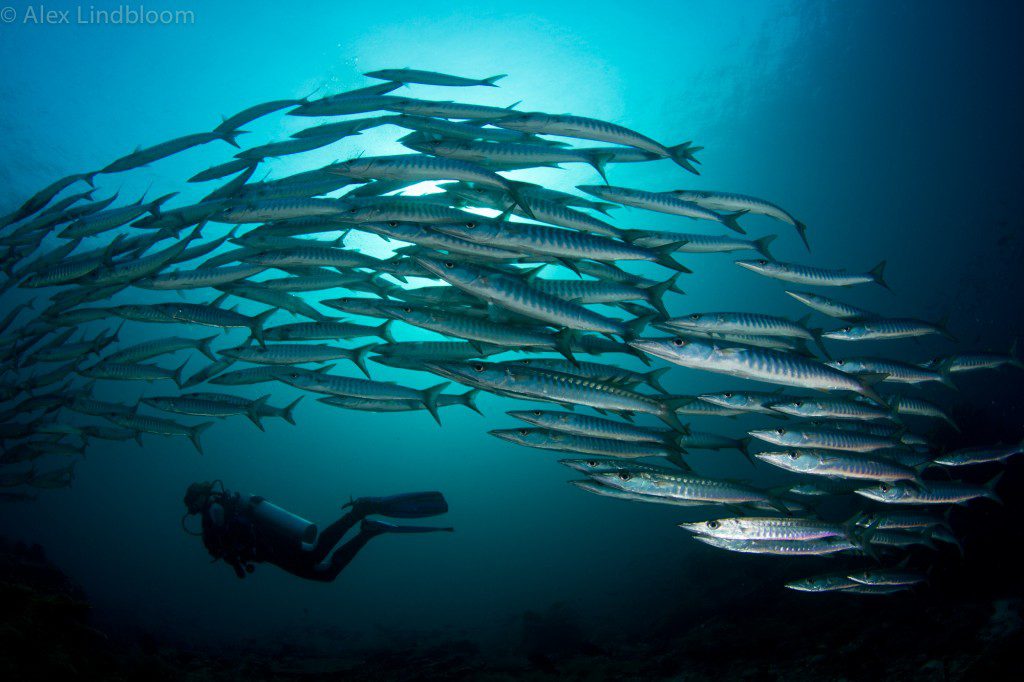 Without obtaining tissue samples, no one can be one hundred percent certain about the identity of this beautiful stingray, which seems to call sandy bottom off Blue Magic home from time to time. Whether it ends up being the largest stingray in the world and a new species, it doesn’t really matter to me, though it would be pretty awesome! What is important is that all my life I’ve imagined what it would be like to discover something. While I’m not the first person to see this big ray, there have only been a few of us privileged to see this giant. And, considering the current state of global exploration, that’s good enough for me. 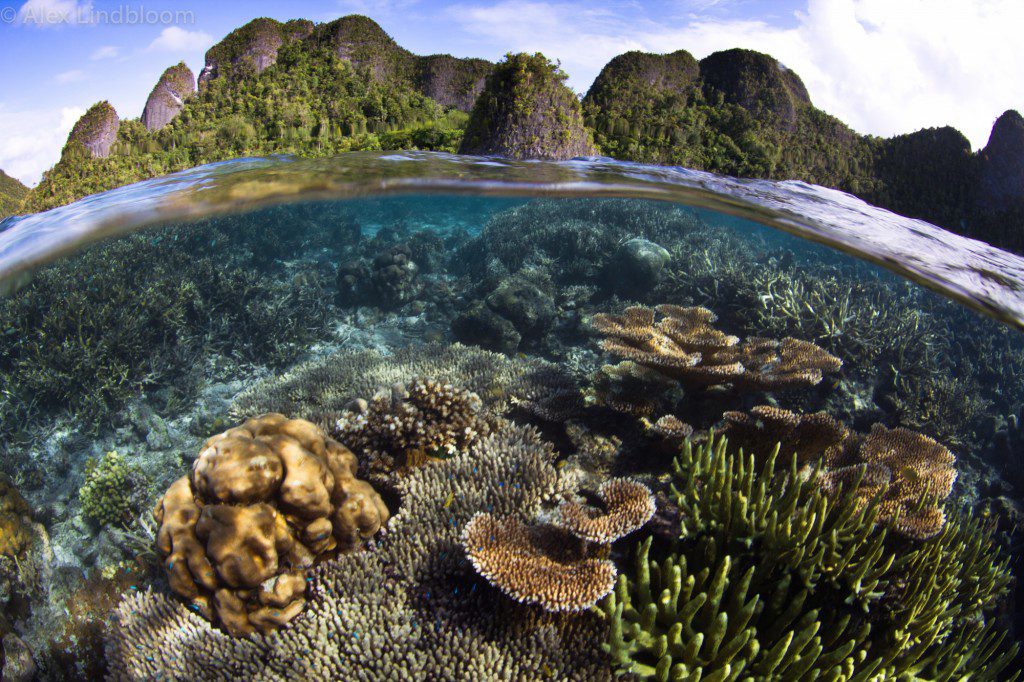