As we rode out to the fishing bagans at dawn I tried to surpress my hopes of seeing a whale shark. I knew there was supposed to be a year round population in the Triton Bay area, but nothing is guaranteed. 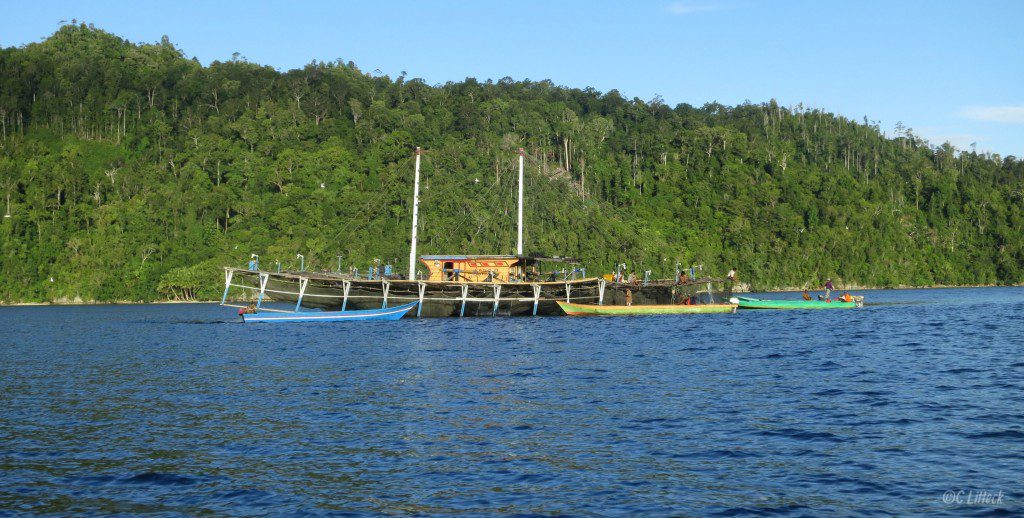 We arrived at the first bagan (a floating fishing platform), the fishermen shook their heads. None there, nor at the second or at the third. Hope and resignation were in balance now, but my guide pointed to another bagan, insistent that this was the one where the sharks were always seen.  As we pulled alongside, we didn’t have to ask the fishermen; there was a whale shark alongside our boat and another in sight. “Quick, get in the water”, my guide insisted, keen for me not to miss my chance in case the sharks decided to leave. Reluctant to descend without my guide, I was just hanging out on the surface, but as my guide and my buddy Sam got in, I was ready to descend.  I was so intent on not wanting to get my hopes up about seeing even one shark, I don’t think I’d really considered what it would be like to be in the water with several huge whale sharks. My only other experiences had been years ago in the Galapagos, which were amazing but were fleeting encounters, and took place in cold water, strong currents, and involved swimming out into the blue just to see one pass by. My experience in Triton Bay was all together different. 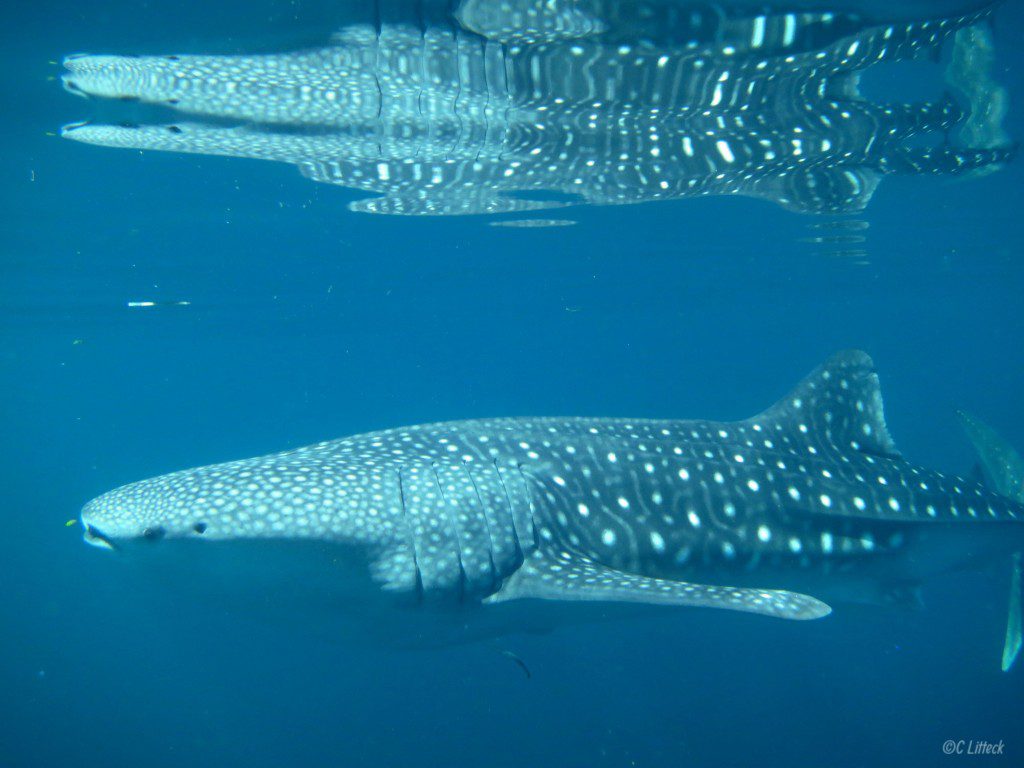 You’re told not to get too close, not to touch, not to scare them off with your bubbles. Somewhat disconcerting to realize then, that the whale sharks have not been informed of the rules. They come close, really close. While we know these gentle giants mean no harm, it’s still unnerving when they head straight for you and then bank away at the last minute. How do they know they won’t hit you with their tail as they pass? They know but we don’t.  After 10 minutes I finally calm down and start to enjoy having them swirling around us. Our guide, confused about where my buddy and I are and why we’re not with the two whale sharks he’s tracking, comes to find us only to realize Sam and I are swimming with two more. He herds us back to the platform with our two in tow, so now we have four with us. 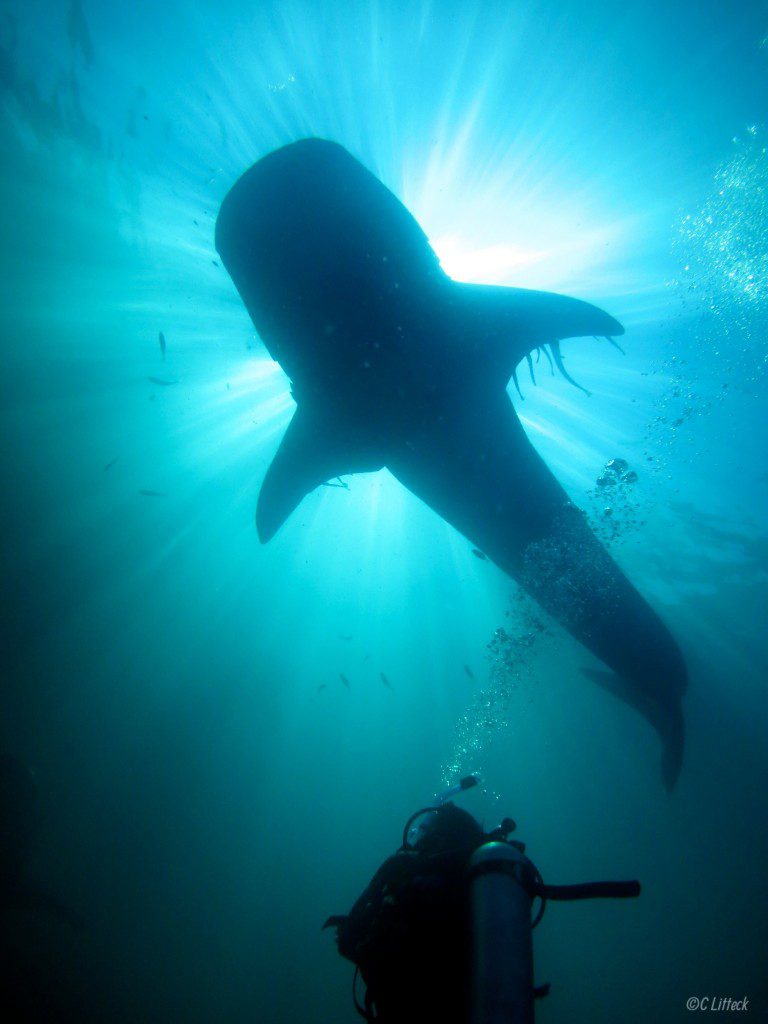 While they had been eating the baitfish it’s more than clear they are also curious about these strange, ungainly, bubble-blowing creatures. In fact, rather than being scared off, they seem to be treating us as some form mobile jacuzzi system as they buzz really close over us to go through our bubbles.  After quite a long time, with my camera shutter finger starting to hurt, my guide holds up five fingers. I think he’s meaning for us to do our safety stop at five meters but then I realize he actually means he’s counted five whale sharks around us now. He can’t seem to believe it himself.  We finally finish our dive and the boatman takes our kit but I can’t bring myself to leave them. Hopeful I turn to my guide and ask if it’s ok to stay and snorkel. “Of course”, he says. 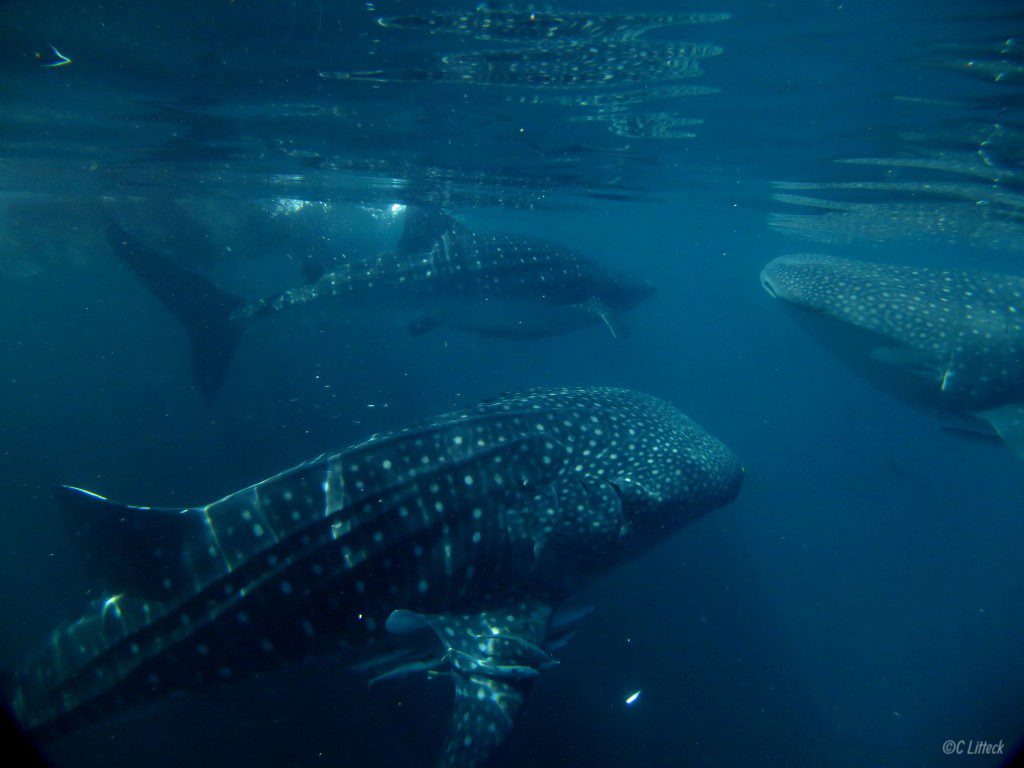 Snorkeling is less intimidating. It’s still difficult to keep track of them, but it’s easier to take in the scene when you’re not worrying depth and keeping clear of their tails.  Staying out of their way is impossible as they continue to circle around me, blithely ignorant of the no touch rule. The enormous fish come right alongside, up from underneath me, and when I do get bopped by a tail fin, I’m relieved to discover that it doesn’t hurt. I’ll remember for next time. In fact I’ll never forget the three hours I spent with the whale sharks of Triton Bay or the rest of this equally magical region.

I’d like to thank Triton Bay Divers and their staff for making this one of the most unforgettable experiences of my life!

Charlie Litteck lives and works in London, UK. An amateur photographer and scuba diving enthusiast, her love of travel has taken her to dive destinations all over the world.