Those of you who follow the BHS know we have been frequently posting about a project called StAR, which is in the process of re-wilding the Leopard/Zebra Shark (Stegostoma tigrinum) to one of its former native ranges, our Raja Ampat.  Project StAR, however, is the first program of the ambitious umbrella initiative we’d like to formally introduce, ReShark.

ReShark is an international collective of over 60 conservation organizations, aquariums, government agencies and more, dedicated to recover threatened sharks and rays around the world by reestablishing healthy, genetically diverse, and self-sustaining populations.  Restoring sharks to their native ranges will balance ecosystems, as these important predators maintain the food web and serve as indicators for broader ocean health. 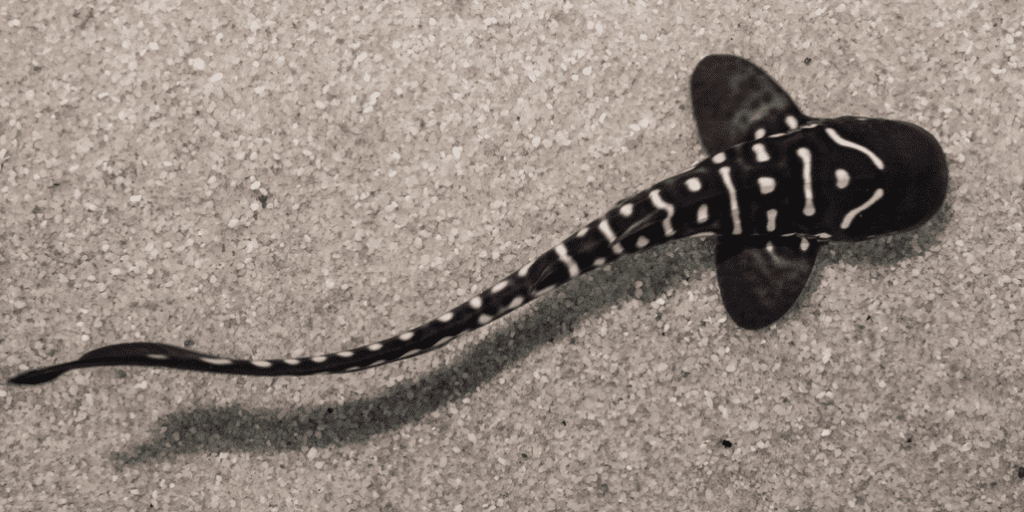 A recently hatched Leopard/Zebra shark pup. At this stage it has its Zebra stripes. As it matures it looses the stripes and becomes spotted…like a Leopard!

More from ReShark, their StAR project, and why they chose Raja for their first shark re-wilding project:

In recent years, zebra shark populations in Raja Ampat (West Papua province, Indonesia) have undergone dramatic declines in the wake of threats like habitat degradation and overharvesting due to shark finning.

Zebra sharks are listed as endangered by the International Union for the Conservation of Nature.

Raja Ampat contains an extensive network of some of the world’s most well-enforced marine protected areas. These measures have enabled the dramatic recoveries of other shark species, however the Eastern Indonesian-Oceania subpopulation of zebra sharks remains on the brink of extinction.

Due to a slow population growth rate, which is common for most shark species, conservation actions including fisheries regulations and the creation of marine protected areas have not been sufficient for recovery of this species. Research and conservation planning have revealed that the species is unlikely to recover without additional intervention.

StAR Project, led by the West Papua Provincial Government and the Research and Innovation Agency of Indonesia aims to recover zebra shark populations that are important for healthy marine ecosystems. This project involves multiple partners’ collaboration at the global and national levels to ensure zebra shark species are recovered and protected for the long-term benefit of the Indonesian people.

Experts conceived that leveraging the proven breeding success and husbandry expertise of accredited aquariums could be critical in the recovery of this species. Through genetic testing, adult sharks from the Eastern Indonesian-Oceania subpopulation have been identified at accredited facilities around the world. These broodstock are being purpose-bred for the StAR project.

ReShark is thankful for the incredible support for the project from the Province of West Papua as an international leader and partner that is dedicated to collaborating and bringing innovation to the conservation of this species in Indonesia.

The most recent post on the BHS website reported that the first Zebra shark eegs had arrived at one of the nursery facilities in Raja Ampat.  According to the latest news some of the eggs are about to hatch.  Everyone in Raja, especially the newly trained “shark nannies”, are beyond excited.  We will have images and videos to share with you very soon.

Of course we will continue posting about the program’s progress, but also follow ReShark for the latest news.  Additionally you can visit the Multimedia page on ReShark site to view some very cool videos about the project and check out their still images of these charismatic creatures.  (Lots more images and videos will be forthcoming, the project has just begun.)

Lastly, it is amazing to be able to say, “More and more sharks will be coming to a reef near (some of) you very soon”.