Author’s note: While the virus rages, I have been working on updating the reef manta database and we now nearly 1400 different individuals and the numbers keep increasing and increasing…

Late last year, BHS manta researcher Edy Setyawan was flying his drone to observe a group of surface feeding reef mantas. While looking closely at the screen of his remote controller, he noticed a distinct difference in the sizes of the mantas in the group of approximately 25-30 individuals. While there were several mantas that were significantly larger than the others, it appeared that most of the mantas in the feeding aggregation were small and likely juveniles. 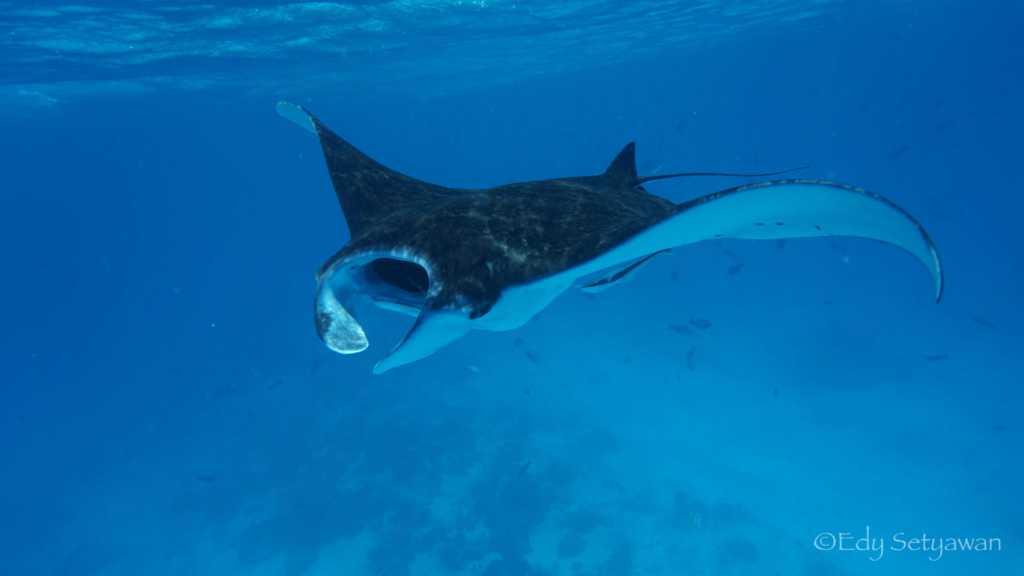 A juvenile melanistic reef manta was observed by Izuan, one of our team members, during manta monitoring (Photo: Edy Setyawan)

After excitedly retrieving his drone, Edy and his colleagues, Orgenes, Izuan and Fakhry quickly jumped in the water to have a closer look at the small reef mantas. Equipped with free diving gear and underwater cameras, they drifted towards a group of three small reef mantas swimming on the surface. As the mantas approached, Edy swam underneath the manta closest to him, with his camera ready to take photographs of the underside of the manta to get its photo identification.

As expected, a close look at the manta confirmed it was a juvenile. It was much smaller (less than 2m in wingspan) than the mature reef mantas the team had been observing in other known manta aggregation sites such as Manta Ridge in Dampier Strait, where most mantas are approximately 3.0–4.0 m in wingspan. Importantly, Edy was able to photo-document the tiny claspers of the young animal, confirming that it was a juvenile male reef manta. 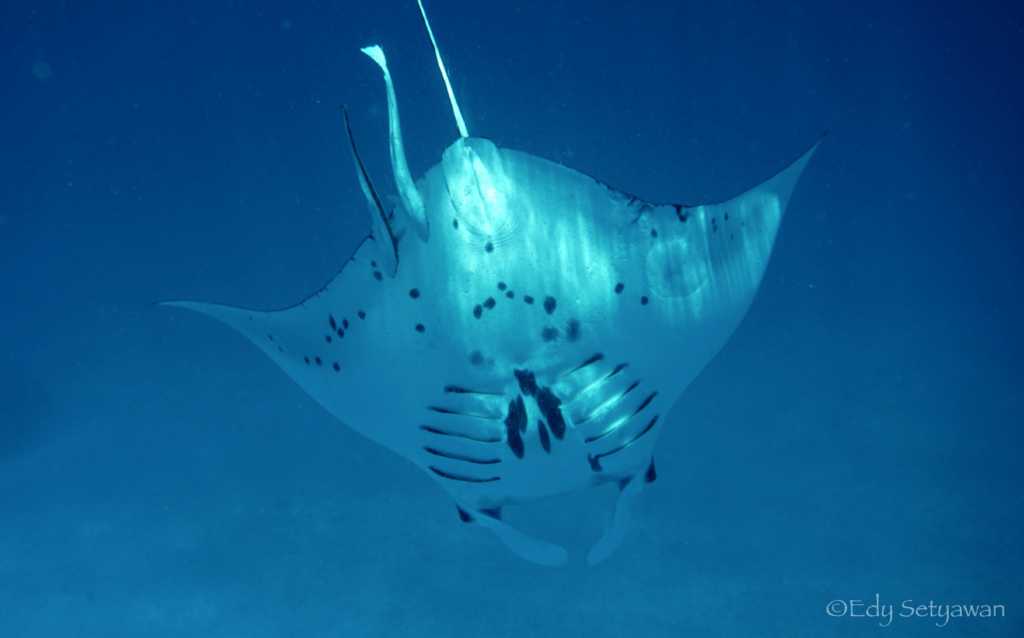 After taking a breath on the surface, Edy then shared his thrill with his colleagues, who had just confirmed that the other two mantas were also juveniles! As they drifted along the current, they encountered other small groups of feeding mantas comprised entirely of juveniles!

Edy, who is also a National Geographic Explorer, and his colleagues then spent several weeks further investigating the manta ray population in this understudied part of central Raja Ampat. Over the course of this expedition, they used various approaches, including photography and photo identification, Unmanned Aerial Vehicles (UAVs or Drones), and underwater ‘camera traps’, to comprehensively investigate the population of manta rays in the region.

Though Edy has been investigating mantas for the past 8 years in Raja Ampat, he’d never seen such a large number of juveniles and young mantas recorded in the same area. Edy and his colleagues observed and recorded more and more juveniles every time they came to the area during this expedition, which was funded and supported by National Geographic Society, Raja Ampat MPA Management Authority (UPTD/BLUD), Conservation International Indonesia, and The Manta Trust – Indonesian Manta Project. By the end of the expedition, Edy and his colleagues counted at least 60 juveniles and sub-adults from the area, as well as several adult males and one pregnant female reef manta that were also aggregating in the area during some feeding events. Given the large number of juvenile individuals recorded, and after consulting with other manta experts, Edy has now concluded that this area in the central Raja Ampat Archipelago is a nursery area of reef mantas! He’s keeping the exact location of the nursery under wraps for now, given its sensitivity and the need to prevent unnecessary disturbance to the juveniles there.

This area is the second reef manta nursery area to be discovered in Raja Ampat, after of course the Wayag lagoon (located in the north-western part of Raja Ampat). Discovering such a nursery area is very important for conservation efforts for this vulnerable species. Nursery areas are critical habitat for juveniles and young manta rays to grow and to take refuge from larger predators like sharks and false killer whales. Given the significant numbers of juveniles in this nursery, a robust management strategy is required to provide additional protections to this special area which is so critical for the health of Raja Ampat manta populations.

Administrator’s note:  Even though the Bird’s Head diving season is over now due to the Coronavirus there is some good news.  There is still time to send in your manta images for our BHS Manta ID photo contest.  The winner will join Edy on a manta-centric liveaboard trip of a lifetime.  Get the details here; BHS Manta ID Photo Contest.