A Humbling Encounter by Jim Black

“The Passage” is a meandering waterway, separating Waigeo & Gam islands in the Raja Ampat Conservancy.  The site offers incredibly diverse photo opportunities for macro photographers. A myriad of subjects await you, and many are still undescribed. I always lobby for as many dives in “The Passage” as I can on trips to Raja. I do want to share a recent encounter with you that happened there. Nearly everyone has a Titan Triggerfish story to tell, so bear with me.

I had just completed a long dive in one of the quiet, calm bays bordering the main waterway. It was an extraordinarily productive dive for macro photography. This dive cemented the survey in my mind that Aegires gardineri was the most common nudibranch in The Passage. At dives’ end, as we returned to the zodiac and passed up our cameras and gear, I decided to swim out to the middle of the channel to assess the current for the next dive. The middle of the channel is full of nudibranchs, flatworms, ovulids, and other invertebrates plus an amazing diversity of small fish on the coral rubble bottom.   It’s a prime macro area if there ever was one. The current, however, can lead to uncomfortable working conditions for macro photography. 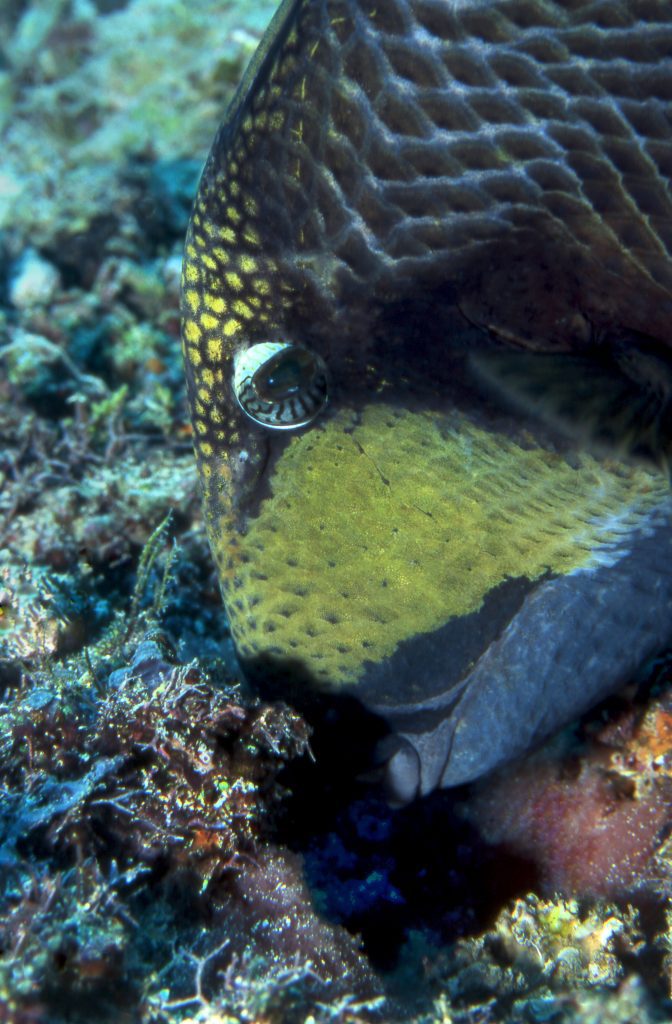 I didn’t make it very far when I noticed a large titan triggerfish bearing down on me at an alarming speed. Obviously, this was a mama triggerfish that had discerned that my current track was going to interfere with her primal urges or parenting duties. The fish locked its jaws onto my right forearm. I was wearing a 5mm wetsuit that protected me from the sharp teeth penetrating to my skin, but not the viselike force. I remember thinking “that’s going to leave a mark.” I shook my arm to try to free myself, which only perturbed the fish even more. Perplexed, I finally arrived at the decision that I would channel Moe Howard and try the age old Three Stooges, two finger eye poke, to get this mother muncher off my arm. It worked, she backed up a couple of feet. But then resumed her attack once again and chomped onto my arm. I thought…”what a nasty fish…that’s it…I’m not gonna ask you out!”   Neoprene can’t taste that good. Now, I am starting to gauge her resilience and will. Perhaps, I didn’t use the magic words “gnuk, gnuk, gnuk” with the eye poke. So, I did it again. The fish let go and backed up a couple of feet. We had a standoff. I stood my ground so to speak. At this point, the old military phrase came to mind, “skill and cunning overcomes fear and superstition every time”. You can’t punch that hard underwater, but you can lay out a forceful jab. I jabbed the triggerfish right in the mouth with all I had. I felt a dull thud and its eyes crossed. I got her good. I hit her again and her eyes crossed again.

Taking a step back

Now, please let me digress a bit as I flash back 25 plus years to a chance encounter. A buddy and I were   enjoying a beer in the Eastern Airlines Ionosphere Club in Miami airport; awaiting our flight to Costa Rica for a Cocos Island trip. It was just the two of us and the bartender in the place. Lo and behold, who walks in but the current heavyweight boxing champ of the world, Larry Holmes and his bodyguard. I acknowledged the champ, invited him to join us, and bought him a beer. The bodyguard declined….he was working. Mr. Holmes was a gentleman and very cordial. I had all kinds of questions for him.

I asked him…“Champ..why did you give Tex Cobb that last fight when there were ranked opponents just waiting for the bout?”
“Tex is a lifelong friend and he needed the money”, he said.
I was reluctant to ask an indelicate question..but I did anyway! “Larry, that fight went the full 15 rounds to a decision. Did you decide to treat that as a sparring match?”
Holmes replied.. “Are you kidding?! You can’t knock out Tex, he’s a world-class martial artist. Had he been able to use his feet, I’d never go into the ring with him. Somewhere around the 45th round, Tex would have knocked me out.”
“Ya know Larry”, I said….“I get that! If I didn’t have to fight the 50 fights and win them all to be able to fight you, I’d get in the ring with you…take my one punch… and wake up in the hospital with a really big check in my hand. I know you are a professional boxer and you would deliver the punch as needed. However, if the opponent was Mike Tyson…I’m sorry ….I’d have to pass on that deal, as he means to hurt people.”
Larry answered that comparison brilliantly. “I have had Mike as a sparring partner many times. He just doesn’t hit that hard. If you want to get hit…take a right cross from Ernie Shavers. Take a left hook from Gerry Cooney. And believe it or not, Muhammad Ali. Ali had a lightning jab with such incredible power that you don’t see it coming. When you get hit…. Your eyes cross …and before you regain your focus it is too late. There is another jab already on its way.“

Back to the present

That chance encounter with the champ floated in my head as I prepared my next jab for that cross-eyed doter bent on over-parenting. Oh…that was a good shot. Oops ..too late.. Another one’s on the way. Somewhere around the 20th jab, it dawned on me that her resilience might win out. I could lose this fight! I began to plot my exit strategy. Jab-retreat….jab-retreat. It was a grand plan and I made it to the zodiac ladder…well almost! As a parting gift, she bit me in the ass as I climbed the stairs. My dive buddies were in stitches. It was wonderful post-dive amusement for them. Regaining my composure, I mused “hey ..maybe we can dive another area in the channel?” The after-action report states that I had a sizable bruise on my forearm. Since I had put on a few pounds, I hadn’t been able to exact a damage assessment on my ass. It isn’t pretty anyway.

But I still love “The Passage” and all its lovely little creatures, many of which are included here. Enjoy! 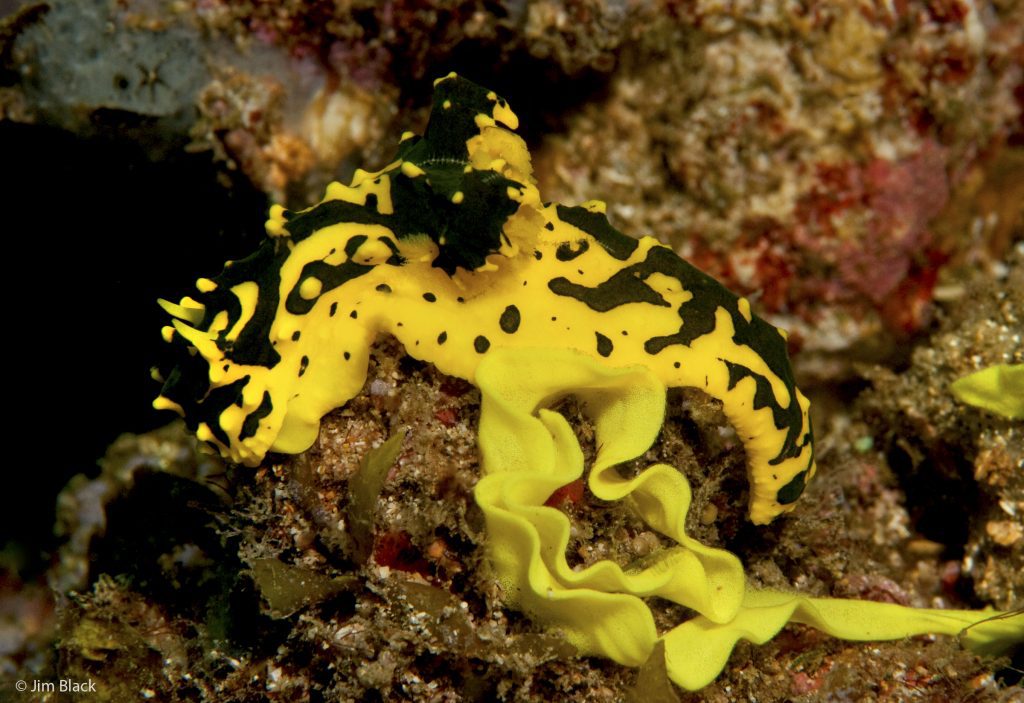 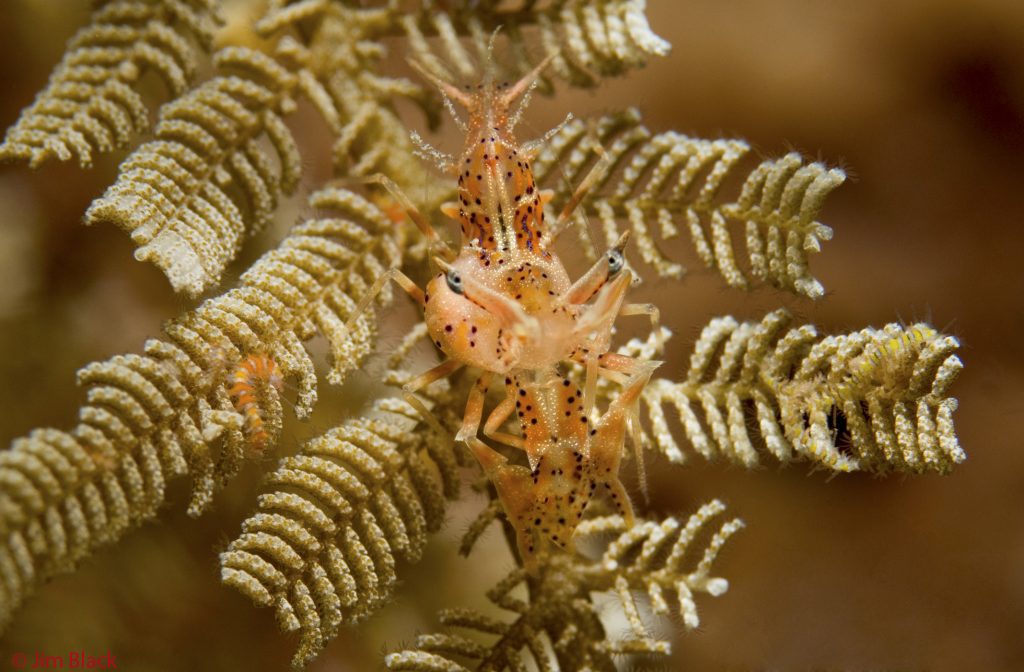 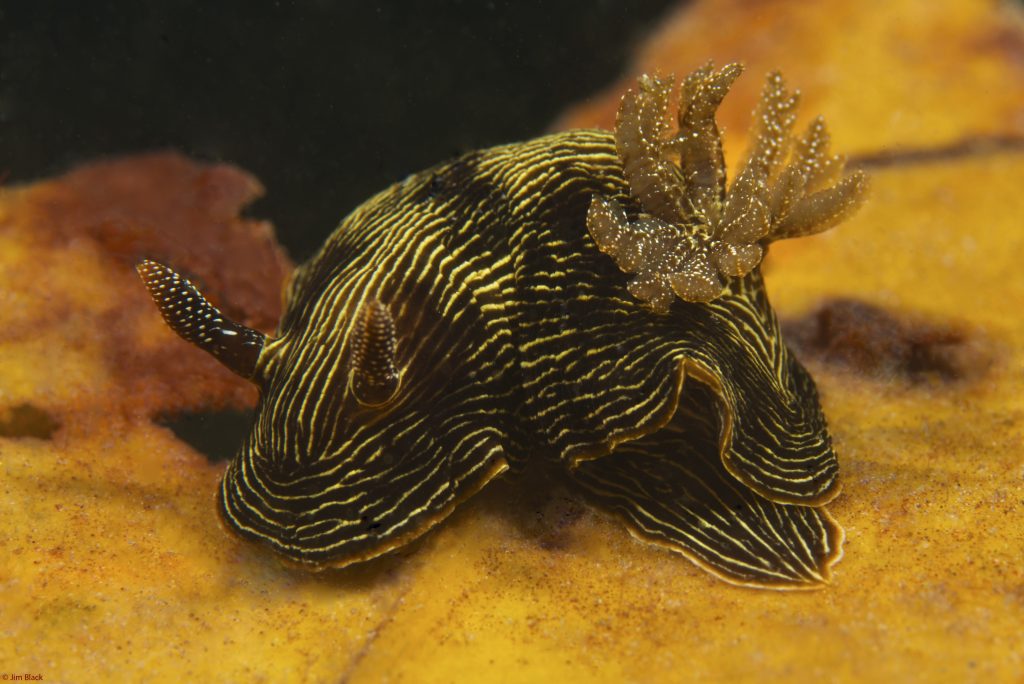 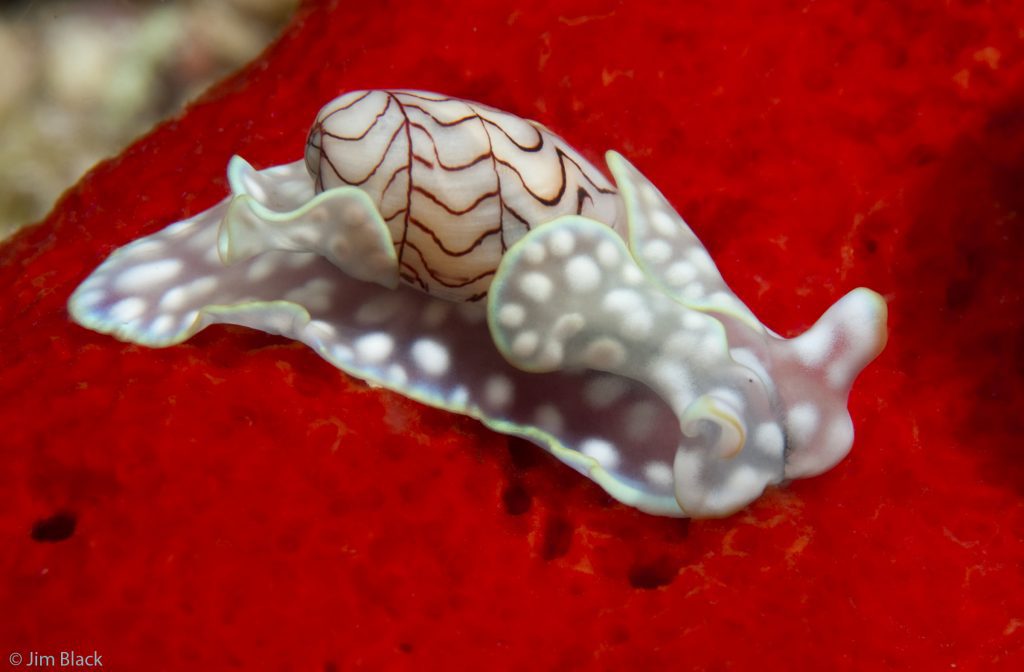 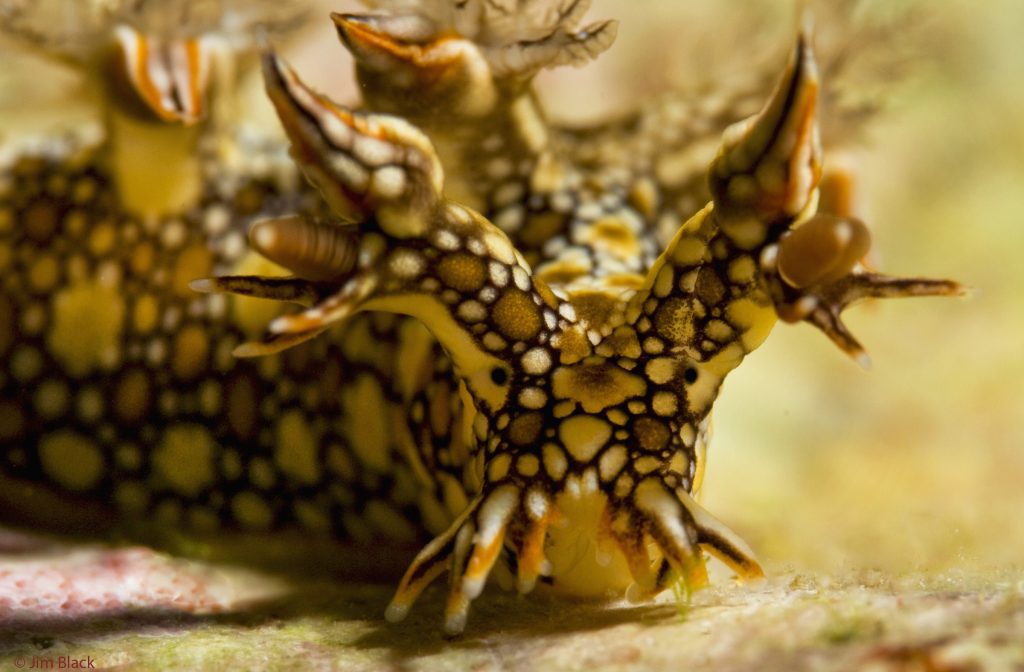 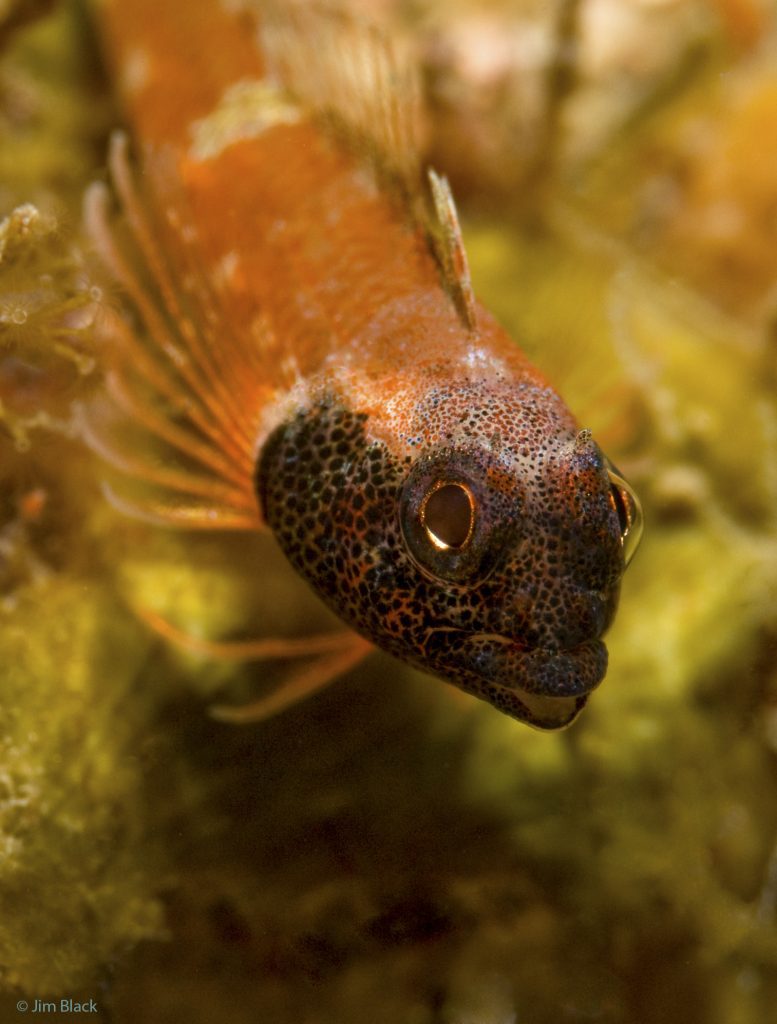 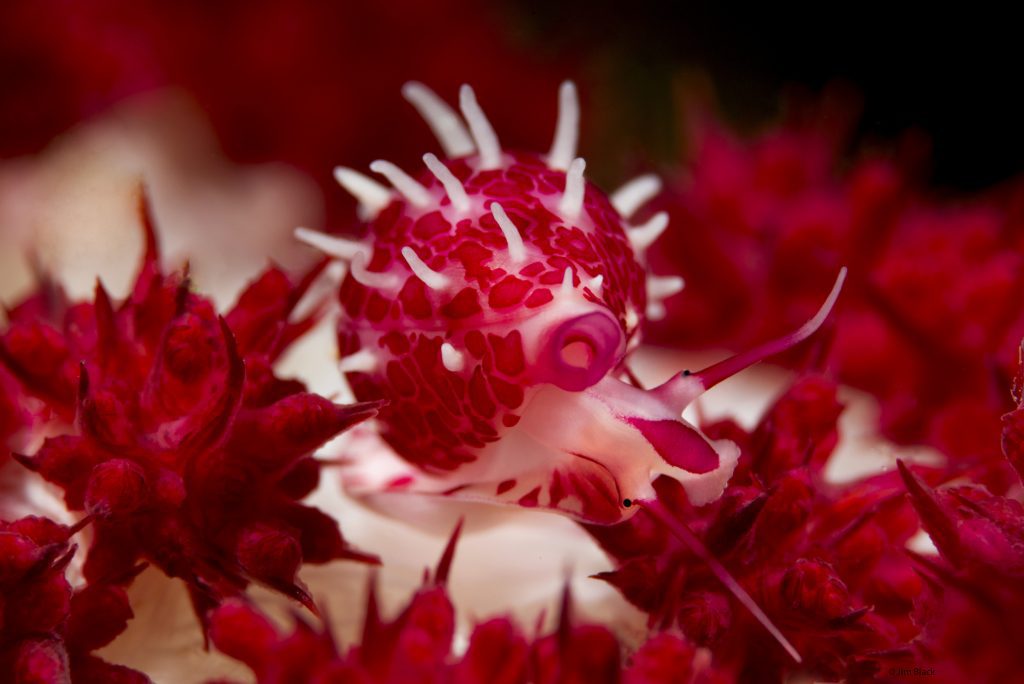 Jim Black is a retired military and commercial pilot whose passion is underwater photography.  Jim enjoys “the hunt” for marine critters, especially nudibranchs and flatworms. To see more of his images go to Maps>West Waigeo, then click on the map pin for THE PASSAGE  and scroll the site’s image gallery.  Jim is also a frequently contributor to Mike Miller’s (Slugsite) 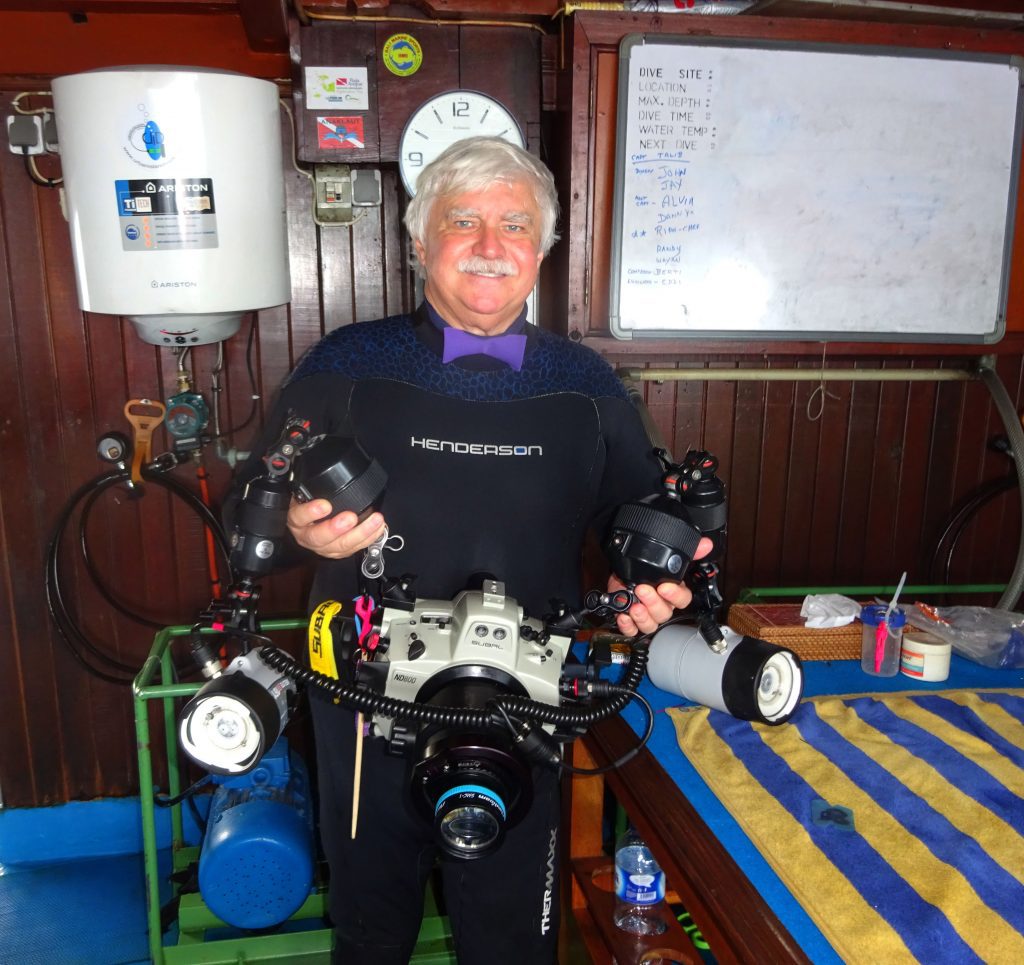 I’ve dived all over the world, but I never tire of diving in “The Passage”. It remains near the top of my “Absolute Best” list.