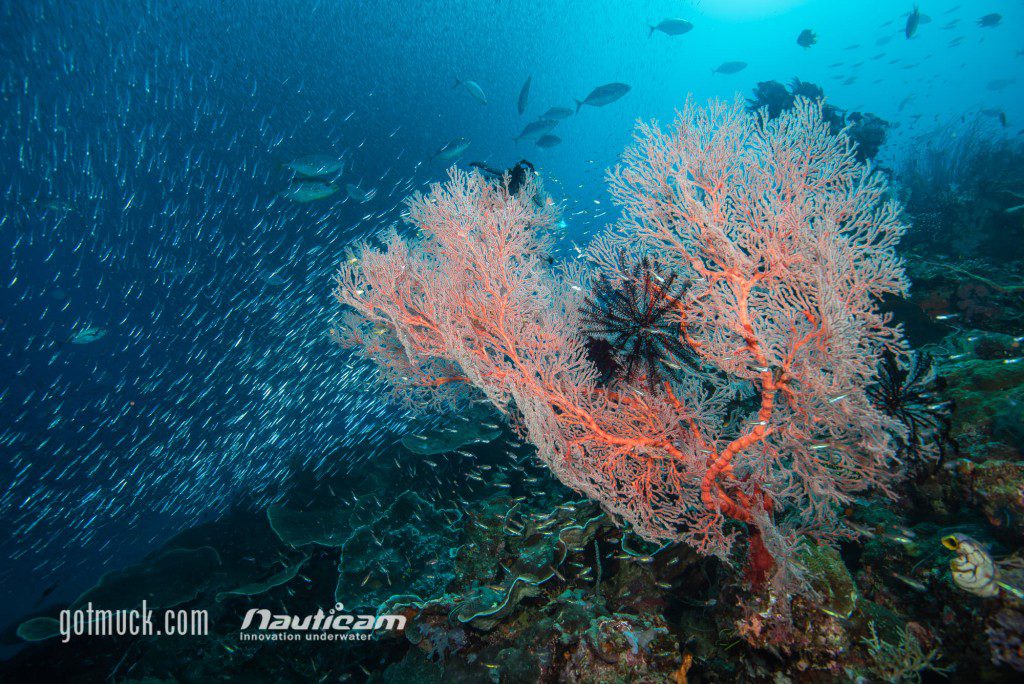 On our recent Got Muck trip to Raja Ampat we discovered a wonderful new dive site. We were aboard the live aboard Wellenreng, diving the site a favorite site known as, Antichovies.  While we were down, Roland Rosenmayr, Wellenreng’s owner, was looking at the charts.  He noticed a nearby twin-peaked seamount, to the west, and decided to investigate.  He was impressed; so on the next dive we made an executive decision to do an exploratory dive on those twin seamounts.  We were happy we did! 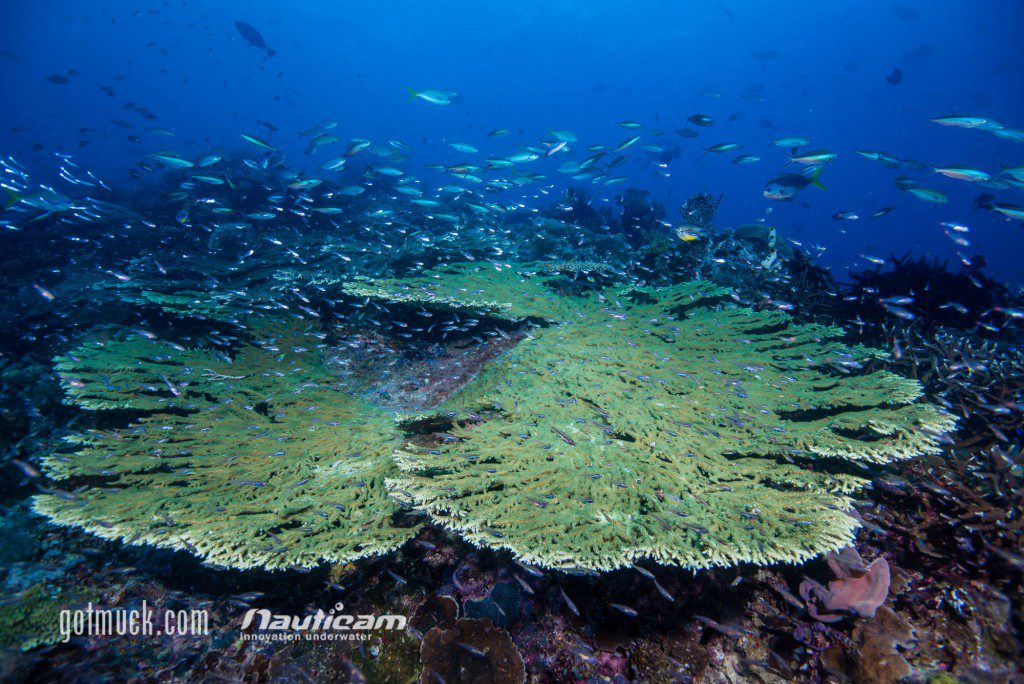 Deep Purple consists of two large reef mounds that stretch up to within 8 meters of the surface from a sandy bottom at 20-30 meters. The two reef mounds are connected by a ridge that begins at 27m and crosses the sand channel that separates them. The two mounds are visible from each other but only with good visibility. It’s possible to circumnavigate one of the mounds on a dive but it would require swimming continuously.  So this is a wonderful site for two dives or a site where the divers can really spread out! 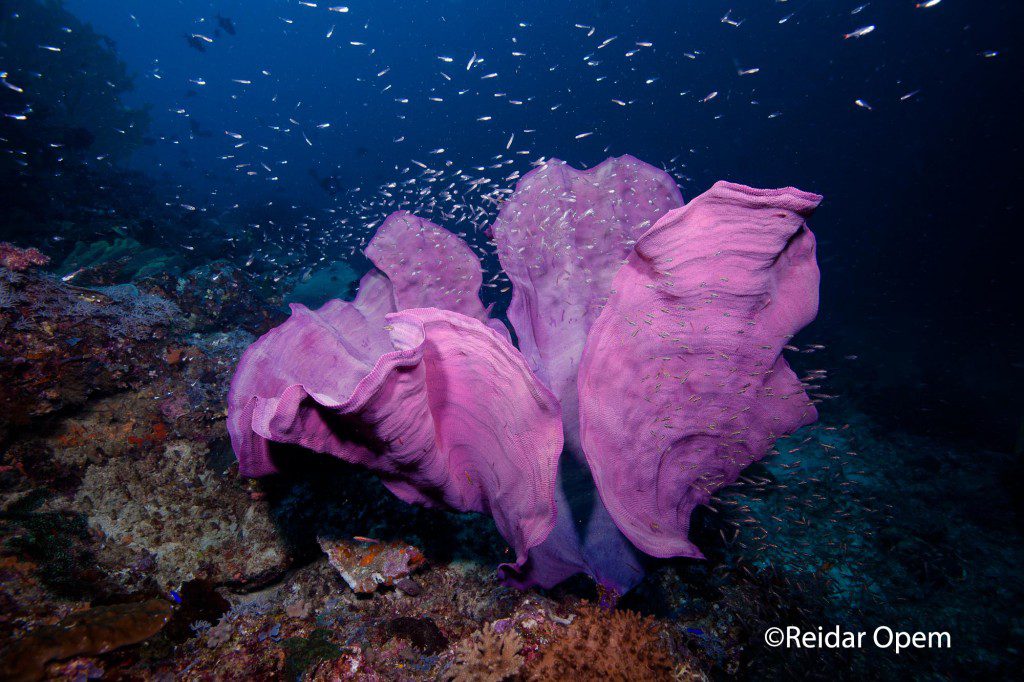 A “Deep Purple” Elephant Ear Sponge, which gives this site its name!

The reeftop itself is fairly flat and has lots of healthy table and other branching hard corals. The slopes alternate between healthy hard corals and rubbly areas with large “Deep Purple” elephant ear sponges.

As with the neighboring site to the east, Antichovies, there can be large groups of baitfish on top of the reef, which continually move around the reef’s edges with the changing currents. Several of the coral areas have glassfish and bronze sweepers schooling underneath.  We also spotted a large number of lobsters and lots of mid-size predatory fishes harrassing the baitball. 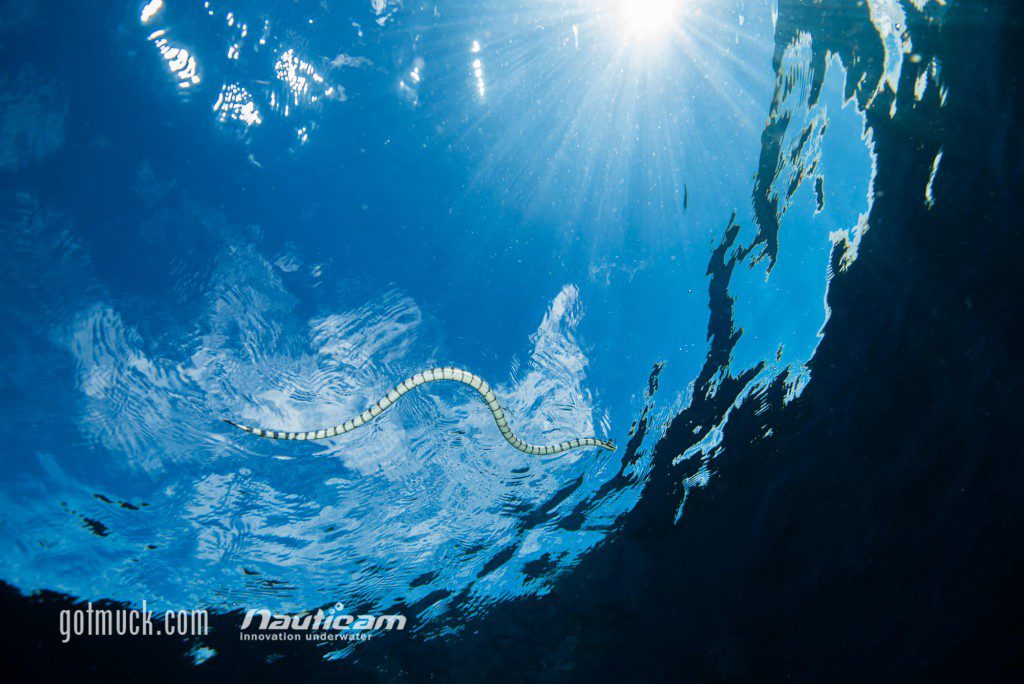 A lone Sea Snake heads to the surface for a breath of air.

So if you are in the area give it a try or two!

Avid photographers, Got Muck’s Hergen Spalink and Kerri Bingham are photography instructors whose work has appeared in major dive publications worldwide. Based in Bali Indonesia, they run exclusive dive expeditions through their company, Got Muck. Their mission is to ensure their valued guests experience the diving holiday of a lifetime. To see more of Kerri and Hergen’s imagery visit their website, Got Muck.