Craig and Betsy Beasley share favorites from their Video Library. What a treat!

Administrator’s note: Recently we were honored to be asked to present a show, via zoom, to the Houston Underwater Photographic Society (HUPS).  Once upon a time we were members of this club full of wonderful, passionate divers, photographers and videographers. And we are still “real” friends with a number of the members.  After the show we “met” Betsy and Craig Beasley, who kindly offered to share some features from their library of videos with us.  What a treat!  And I know you will agree.  But first a bit about them. 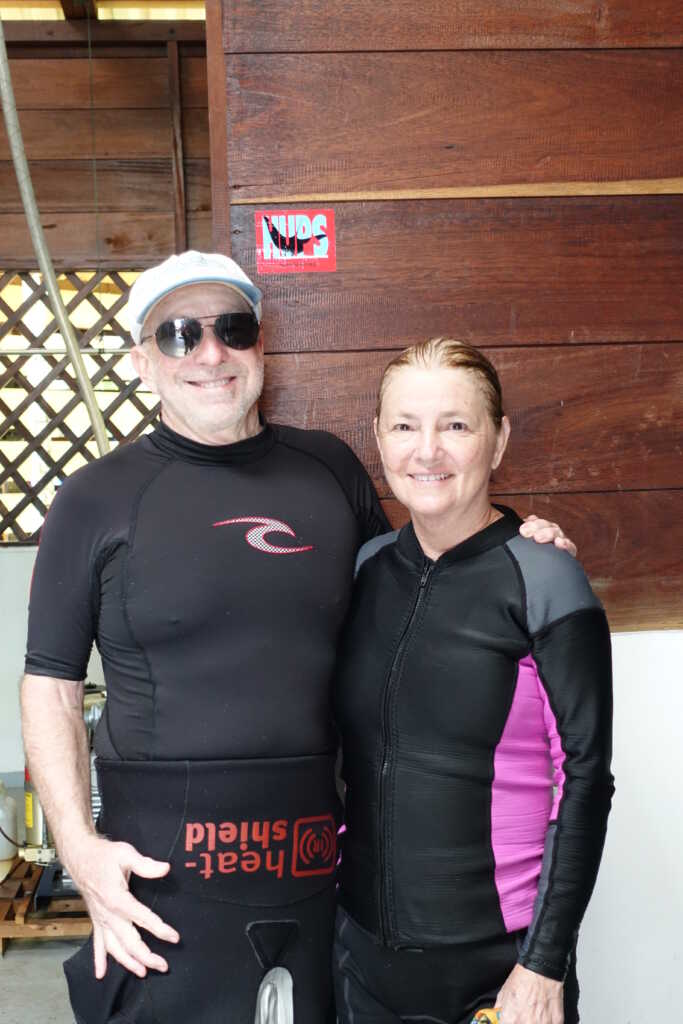 Betsy and Craig are a video/photo team who, since retiring, have concentrated on their passion for video and photography that shows the beauty of the ocean and its inhabitants. Betsy has had careers as a psychologist and then tennis professional before retiring in 2015. Craig enjoyed a career as mathematician-turned geophysicist and retired in 2016. Of course, neither is totally retired from these activities, but are getting closer, especially after Covid-19. They are members of the Houston Underwater Photographic Society (HUPS) and were co-chairs for the first HUFF (Houston Underwater Film Festival). The HUFF is sponsored by HUPS and was delayed more than a year by the pandemic. It was held in June 2021 and more than 60 underwater films from 24 countries were screened over 2 days. Preparations are under way for the 2022 HUFF to be held in April of 2022.

Since being stationed in Singapore in the early 1990s where both began diving in the area, they have watched the diving options in SE Asia expand dramatically and always return to the area as it is their favorite in so many ways. They make films both as a team and independently; many of them have been filmed in Indonesia and, particularly in West Papua.

Here are a few of their films that focus on various aspects of the wonderful diversity found in these waters. Enjoy!

To view more of the Beasley videos visit their You Tube Channel.

This film tells the true story of an adventure caused by a sudden storm while transiting the open sea between south Raja Ampat and the north. A rough night and a damaged boat could have amounted to disaster but the whole thing ended serendipitously.
Administrator’s note: They even discovered a few new muck sites for us which we will share soon.

Giants and Pygmies of West Papua

Filmed in Triton Bay and Raja Ampat, this film celebrates the diversity of life from the very largest to the smallest. Everything is there except for a lot of people, which is a good thing!

Filmed in 2018 at Triton Bay, this is Craig’s most recent movie and was (finally) put together in the bitter winter of 2020-21 when the Pandemic gripped the world and a bitter winter blizzard lashed even the southern part of the US.  Dreaming of the good old days of spending weeks diving the West Papua, he thought we could all use a little good cheer.

Although not filmed in the Bird’s Head, I know you will enjoy these videos as well

Kalimaya: Off the Beaten Path Between Bali and Komodo

To a Fish and a Fish Answers

This collaboration between Betsy and Craig features film and production by Betsy and Craig provided the music. The movie features a narration consisting of a Victorian era poem illustrated by underwater images.

Betsy’s fascination with animal behaviors and survival mechanisms shows through in this prize-winning film that features the many methods of hiding we find underwater.  Most of the video was taken in West Papua with some from other parts of the coral triangle, such as Lembeh.