Cenderawasih Bay – Reminiscences from 2013 and 2014 by Ellen Gritz 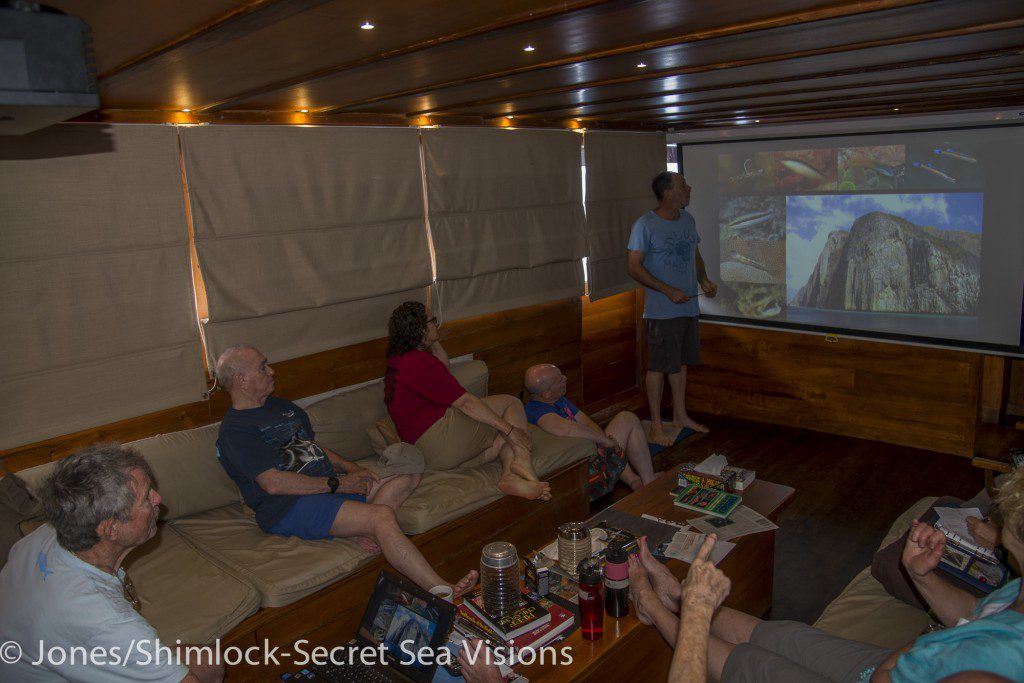 My husband, Mickey Rosenau, and I have dived in Cenderawasih Bay twice, in July of 2013 and in August/September, 2014. On the first trip, organized by Secret Sea Visions, the group was accompanied by the leading marine scientists, Drs. Mark Erdmann and Gerry Allen.   Gerry and Mark both added great enrichment to the trip through their extraordinary experience and knowledge, which they willingly shared through several Power Point presentations and endless patience in answering questions about marine life and fish identification. We even had the opportunity to follow them underwater in their hunt for epaulette sharks and to witness collecting techniques. 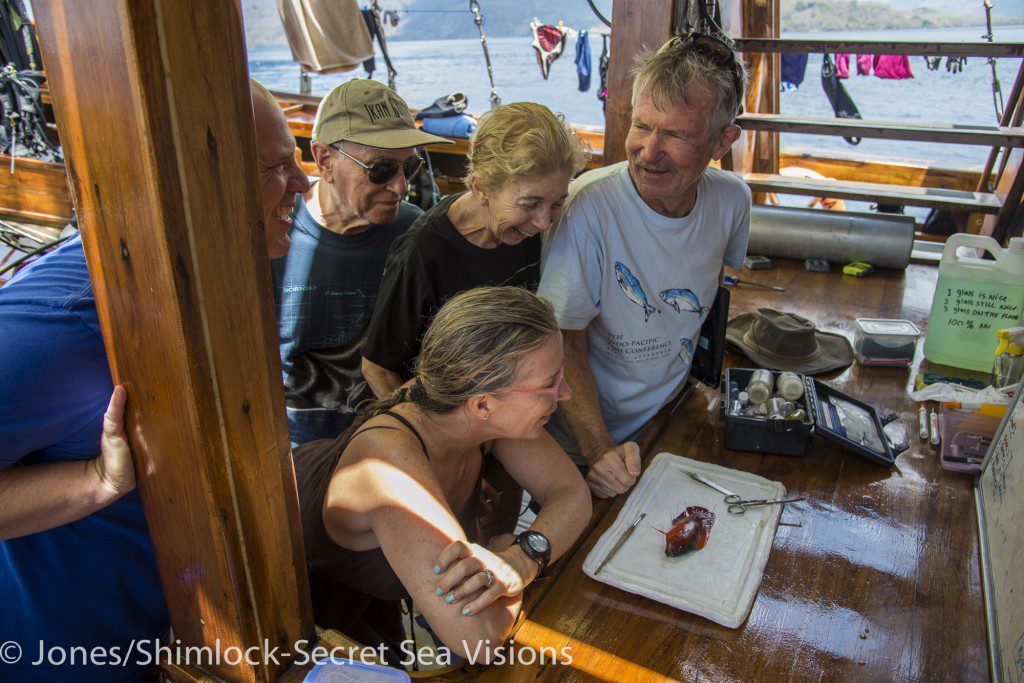 While guests, including Mickey and Ellen (center) look on, Dr. Allen waxes eloquently about a newly collected species

There is so much to see and appreciate in this unique marine environment because of the geologic formation that created the bay and forced normally deep dwelling fish into shallower water, plus the isolation and development of endemic species. Of course, the whale shark experience is the highlight, and I spent about 12 hours on each trip in the water, snorkeling at the bagan, just “being” with the whale sharks. It is endlessly fascinating to watch their graceful bodies come up to feed at the bagan, over and over. I loved being only inches from them as they carefully rose and descended without ever touching a diver. I would soar over them as long as they would permit me, before diving and circling around the bagan. Seeing them interact with each other was also wonderful, although we never viewed more than 5, we usually about 2 at the bagan, at any one time. 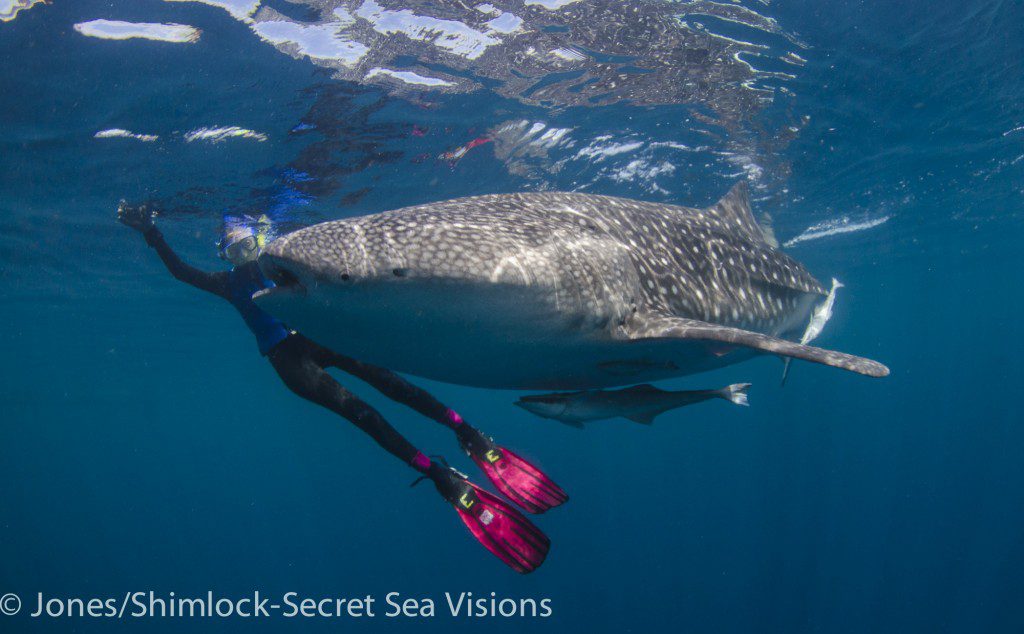 Ellen gets close to a whale shark!

I have long had a “passion” for angel and butterfly fish, and was very excited about the possibility of sighting species that I would not otherwise experience in my Nitrox diving lifetime because of the depths at which they swim. With Gerry and Mark around, we spotted Burgess’ butterfly (Chaetodon burgessi) at Tridacna Slope and Rorebo (Wild Fish Ridge), and the two beautiful species of angel fish, the ornate and black-spot (Genicanthus bellus and Genicanthus melanospilos) at Rorebo (Wild Fish Ridge), Bellissima, and Aibai (Half Island Ridge).   Each of these species was seen below 25 meters, usually around 100 ft. There were also frequent sightings of Lamarck’s angelfish (Genicanthus lamarck), which is seen at shallower depths in a wide area, and I have sighted on many other trips. 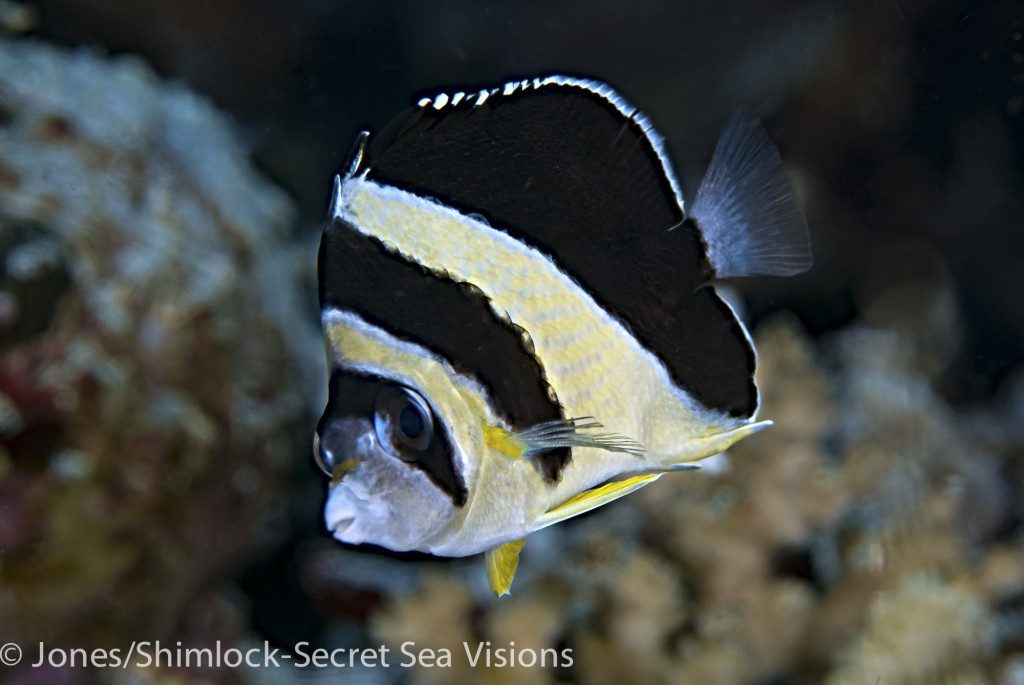 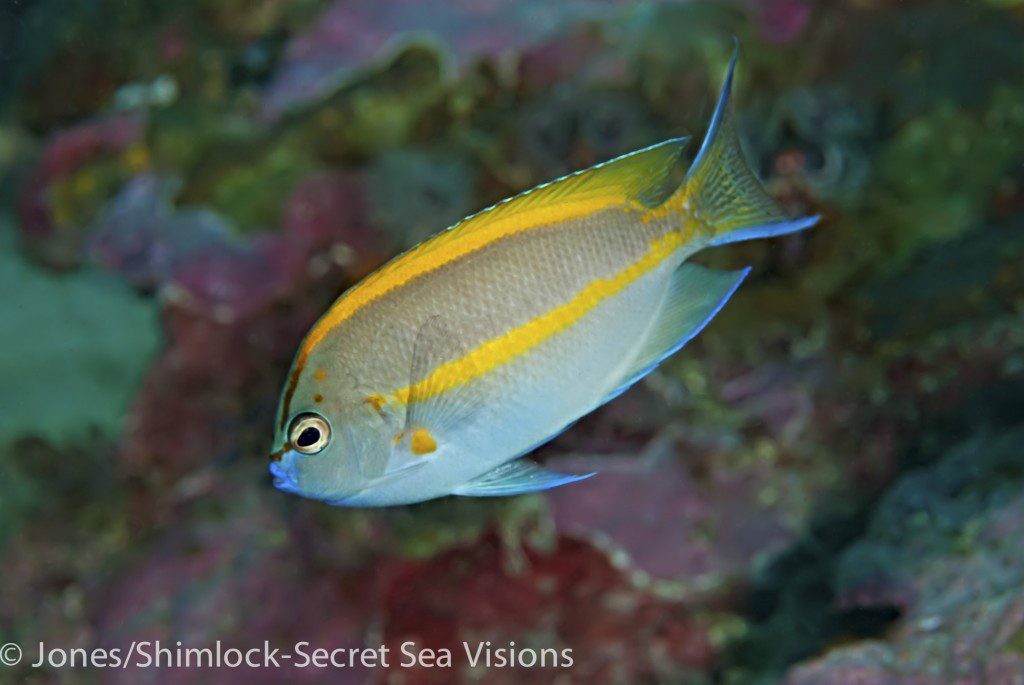 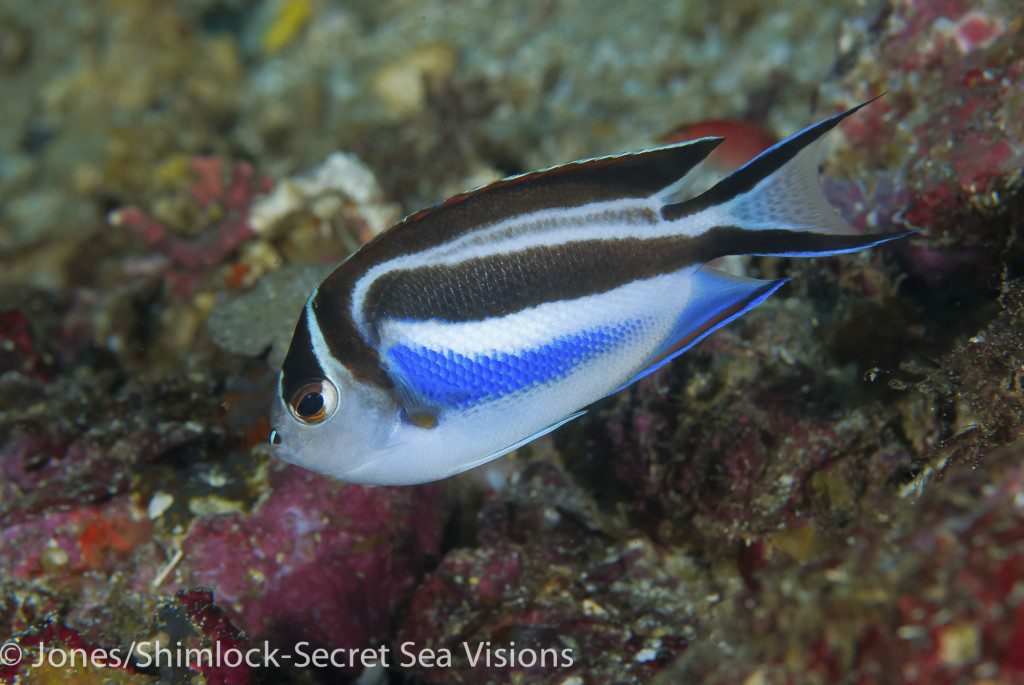 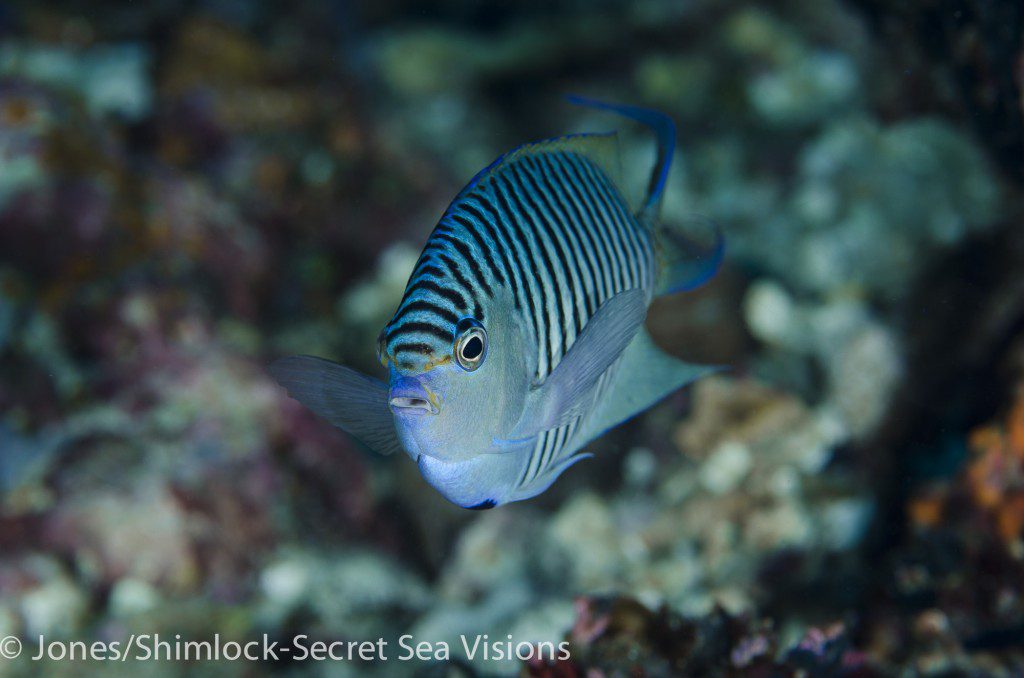 Another fascinating aspect of the Cenderawasih experience was seeing the familiar forms of species change into endemics. This was most apparent in the long-nose butterflyfish (Forcipiger longirostris) in which the bright yellow body assumes a much darker shade in Cenderawasih (Forcipiger wanai).   The “changeover” occurs at Yapen Island, and that was fun to observe as well.  (There are other species that have endemic Cenderawasih forms, including a damselfish.) 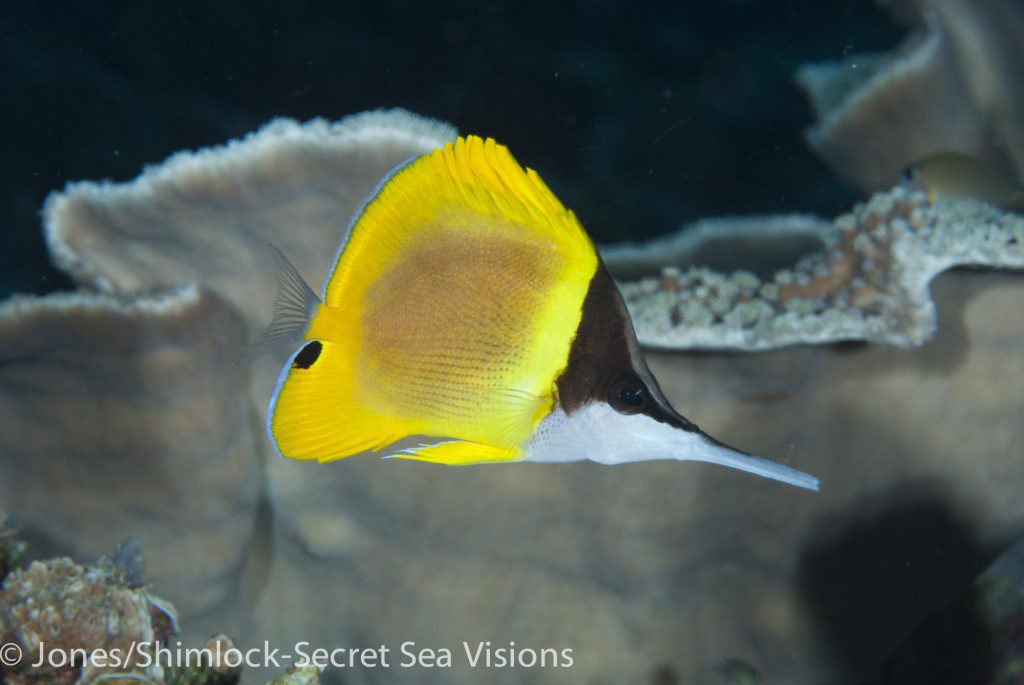 Mark and Gerry also introduced us to the endemic flasher wrasse species of Cenderawasih – including Walton’s (Paracheilinus walton) in nuptial display. In addition, on one night dive, we saw three Cenderawasih walking sharks and watched Mark catch them and take tiny fin samples for DNA analysis. 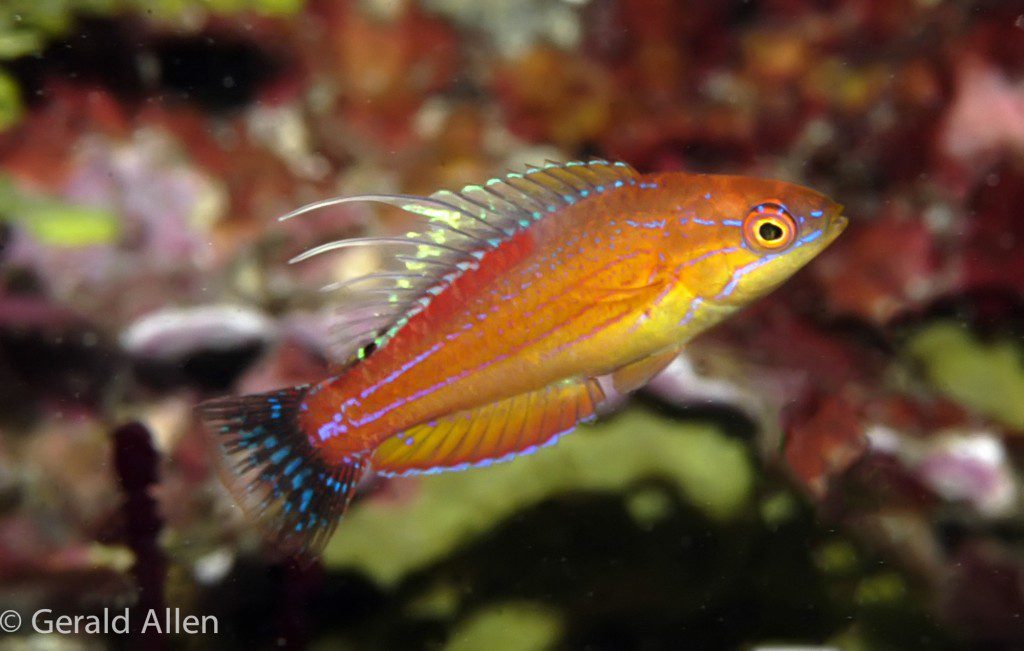 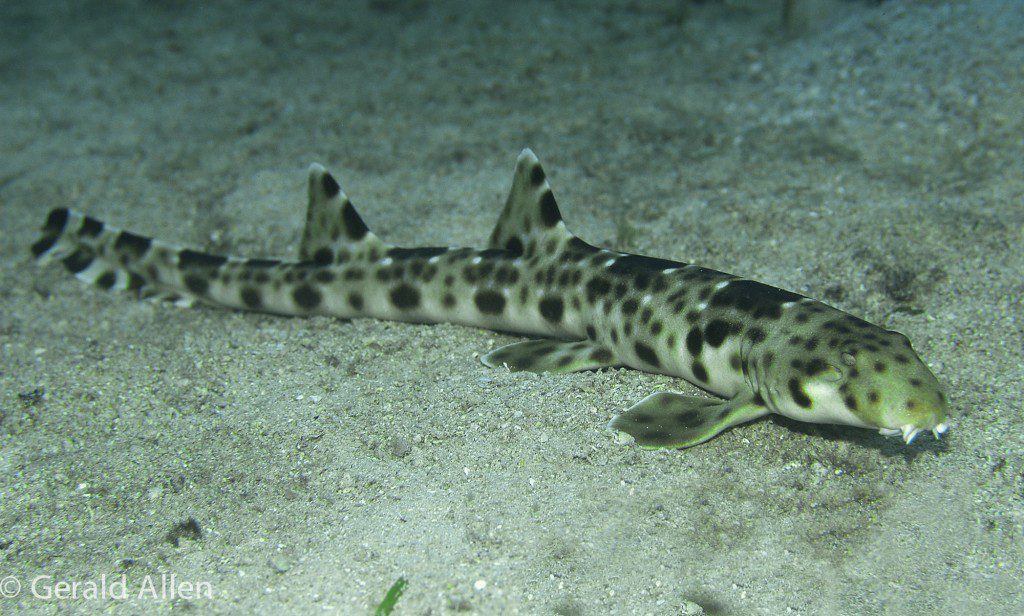 I enjoy counting the species of angel and butterfly fish that I see on each dive trip. This isn’t done in a scientific manner, since I don’t take into account the length of the trip and number of dives, just the number of fish species seen per trip. On the 2013 trip, I saw 16 species of angelfish (my record was 18, in Raja Ampat) and 36 species of butterfly fish (record was 37 species, in Alor). Thus, Cenderawasih ranks among the most diverse areas for these species in Indonesia, in my own personal experience.

I will conclude by saying that our two Cenderawasih trips were among our most unique diving experiences, and I highly recommend the area to any novice and experienced diver. You will not be disappointed!

Dr. Gritz is a psychologist who has specialized in cancer prevention research over the course of her career at UCLA and at the MD Anderson Cancer Center, in Houston, Texas. She is an avid scuba diver, swimmer and aficionado of international travel, indigenous cultures, and folk-art.