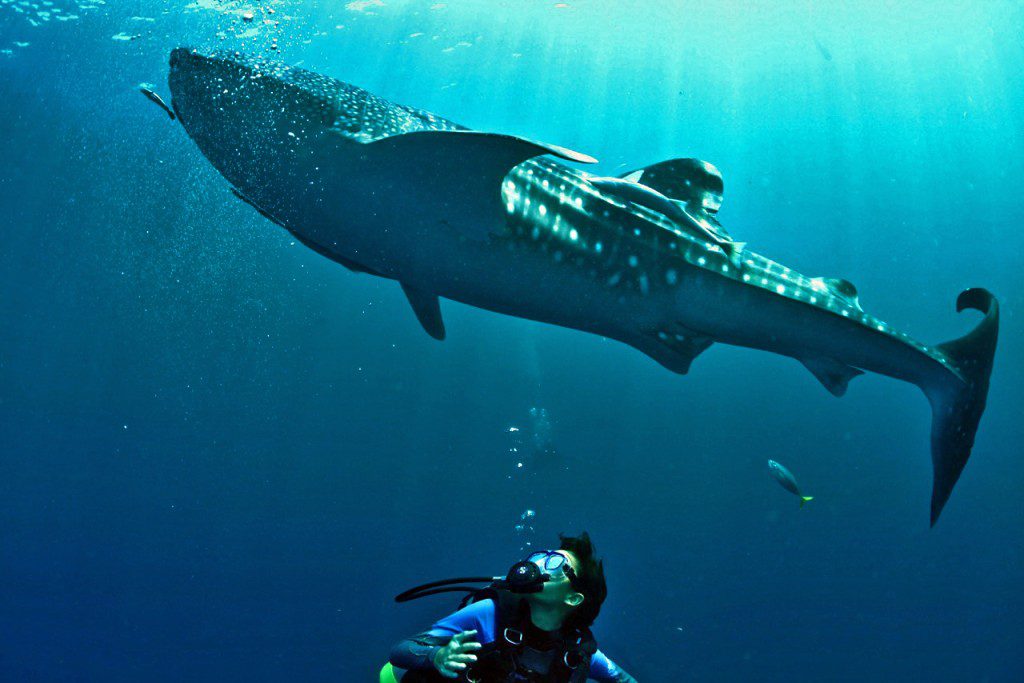 Brahm stares in wonder as a Whale Shark passes overhead

I’ve wanted to see a whale shark ever since I knew they existed. I think I was in my late 20’s when I first heard about them and it took 20 years before I actually saw one for real. In between that time I would read books to my children that tended to focus on ocean life (I admit guilt to molding their little minds to become fascinated by the ocean) and by the time they were 8 years old they could rattle off marine creature facts like a seasoned pro. They knew that whale sharks could be as big as a school bus (from Ray Troll’s “Sharkabet”) and they knew that they had no teeth and only sieved the finest of fish and plankton, they knew they were perfectly harmless to humans, but nothing could prepare them for the big exclamation mark that burst in their bellies when they first slid into the water with them. 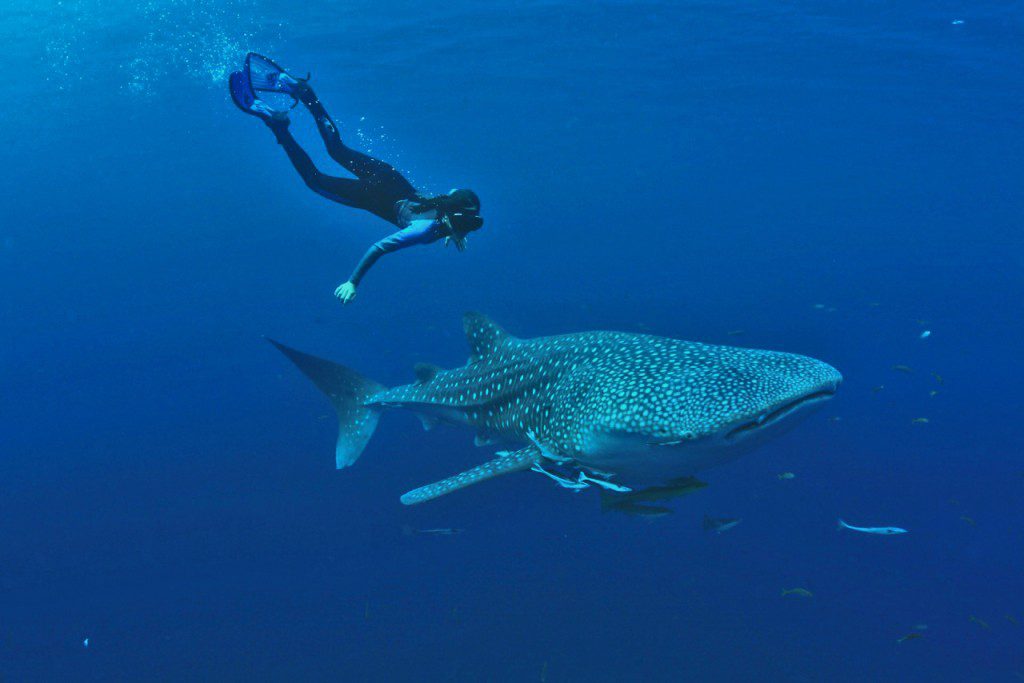 Mica snorkeling with a Whale Shark

I suppose that school is important for the basics of functioning in society like reading, math and how to get a long with kids you don’t actually like. But when it comes to experiencing our natural world I am an ardent believer that there is no amount of reading, presentations, reports or exams in the classroom that can rival the understanding and appreciation a child can gain from experiencing nature with all their senses switched on “in situ”. 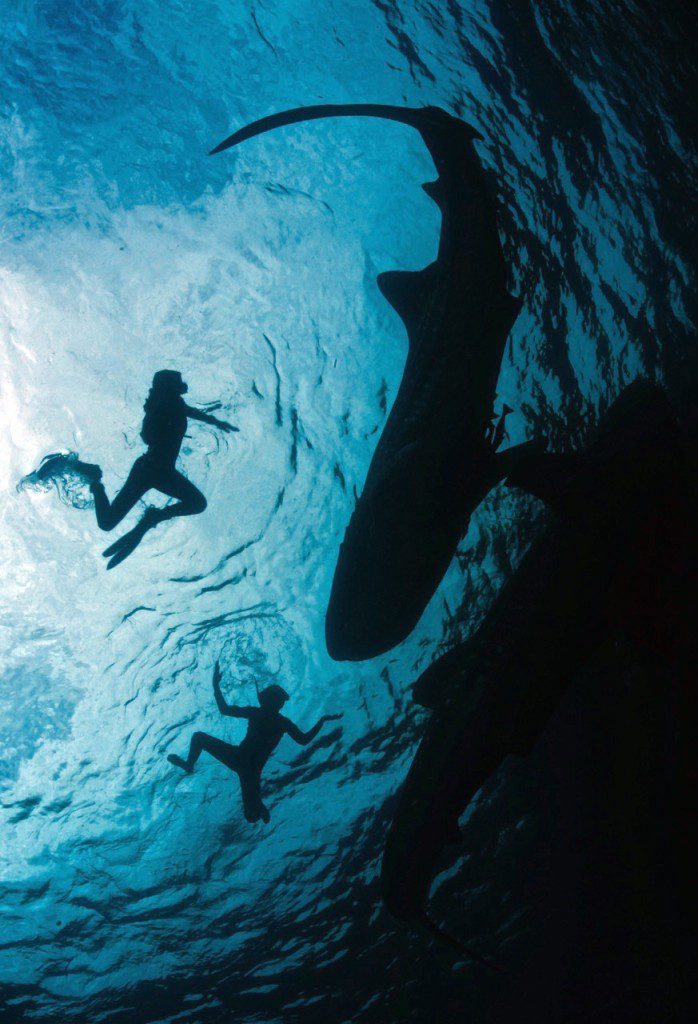 Mica and Brahm “dancing” with a Whale Shark

And that’s why when my husband, Mark Erdmann a marine biologist and Conservation International’s vice president of Asia-Pacific marine programs, was heading out to Cendrawasih Bay to work with whale sharks I made sure that my two older children, Mica and Brahm, were booked in with him. Never mind when school holidays were – school is always there but opportunities like this don’t happen all the time and really, why wait? Who’s to say that my children will ever be able to see a whale shark in another 20 years given the extent of human and environmental curveballs that are hurled at the existence of these and all things living on our planet these days. I don’t want them to only know wondrous creatures like whale sharks the same way they read about Tasmanian Tigers and Dodo birds…”so little known”…”pity they’re gone”….”what a shame”… and all those other empty phrases we have to hang onto to console ourselves of our loss. 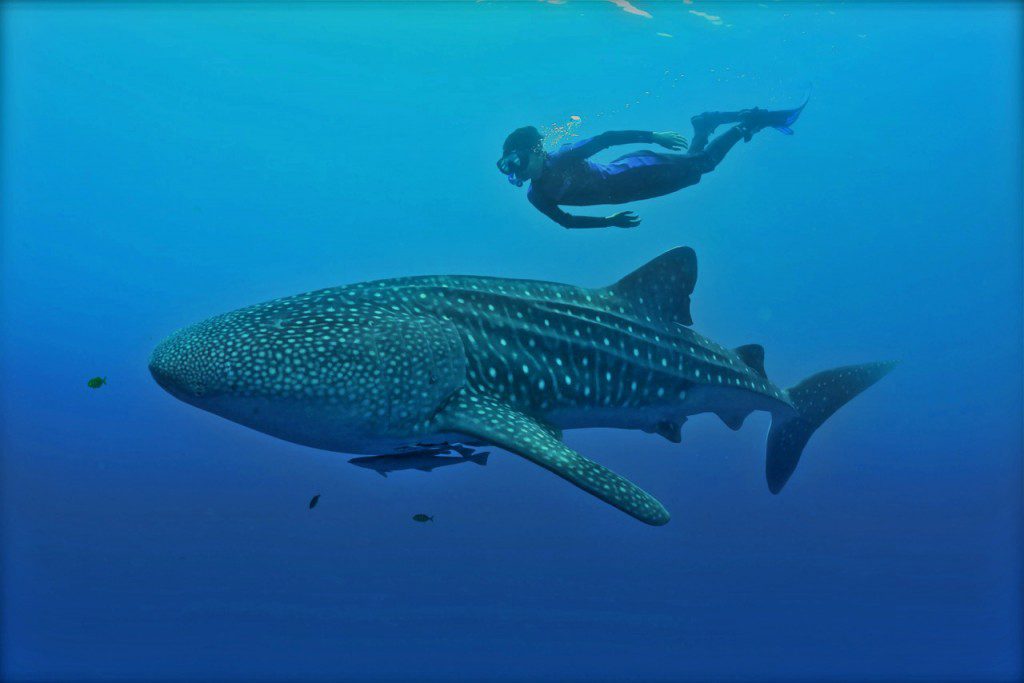 Brahm and his first Whale Shark

My son, Brahm who was just 10 years old at the time remembers feeling “strangely compelled to get closer and experience their presence despite them being so big”. And now when he sees an image of a whale shark he says he “feels a connection”. Maybe, just maybe, he will never forget those whale sharks nor the feeling of awe and reverence he felt swimming amongst them. With the knowledge my children have of these magnificent animals, not only from books, but also also from meeting their souls, I am hopeful that this will move them to protect them in some way.
Because “In the end we will conserve only what we love; we will love only what we understand; and we will understand only what we are taught.” (Baba Dioum)

Arnaz Mehta is group leader for the Erdmann family.