Venu Island, home of the “Ambassador” of Kaimana’s Seas by Nita Johana

Venu Island, home of the “Ambassador” of Kaimana’s Seas 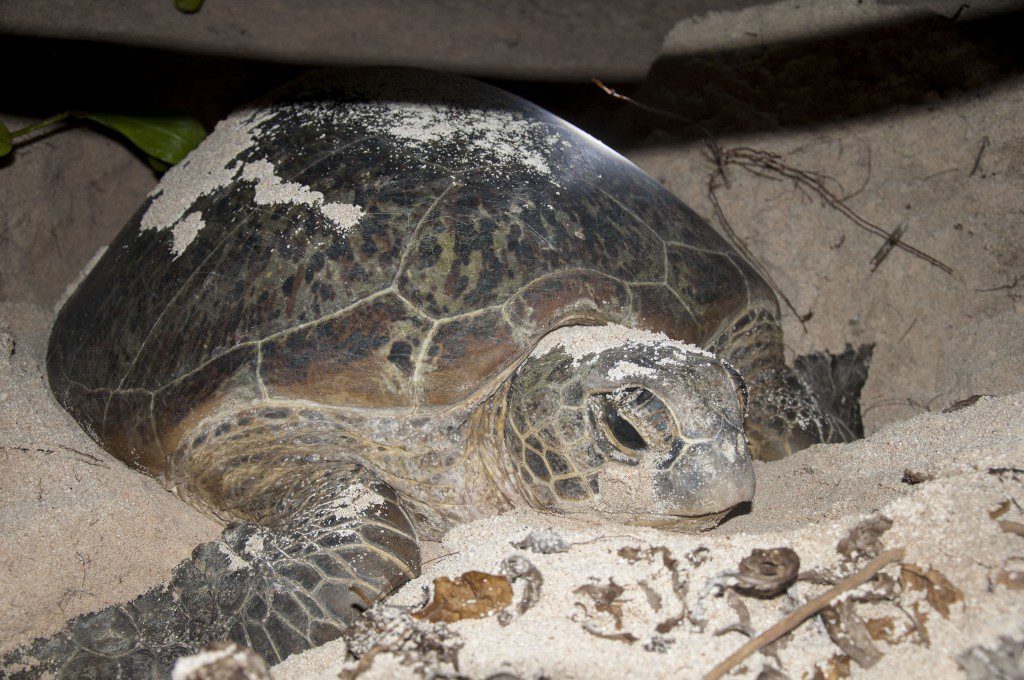 The waves hit the shore, accompanied by strong winds sweeping the small white sand island, only about ​​three football fields in size, southwest of Kaimana, Triton Bay’s gateway city. The village community has named this place Venu Island. Venu means “eggs” in the local Koiway language, and the name represents the eggs laid by hundreds of turtles that nest along the island’s sandy beach. To reach Venu from Kaimana requires a two to three hour journey in a speedboat. Shaped like a bracelet, with a saltwater pool in the middle, Venu is home to many exotic bird species, but the main attraction for conservationists and tourists is turtles.

Venu Island is relatively flat, only about 7 meters above sea level at its highest point, so its entire perimeter and even the inner island are ideal locations for turtles to nest and lay eggs. Three main species of sea turtles nest on Venu: green turtles (Chelonia mydas), hawksbills (Eretmochelys imbricate) and olive or pacific ridleys (Lepidochelys olivacea).

Monitoring and documentation includes determination of which species are nesting, the time (date and hour) of nest building, the predominant location of nests, the size of the nesting turtles, and frequency and the number of eggs produced. Monitoring is preformed every evening at 19.00 and lasts until 23.00. 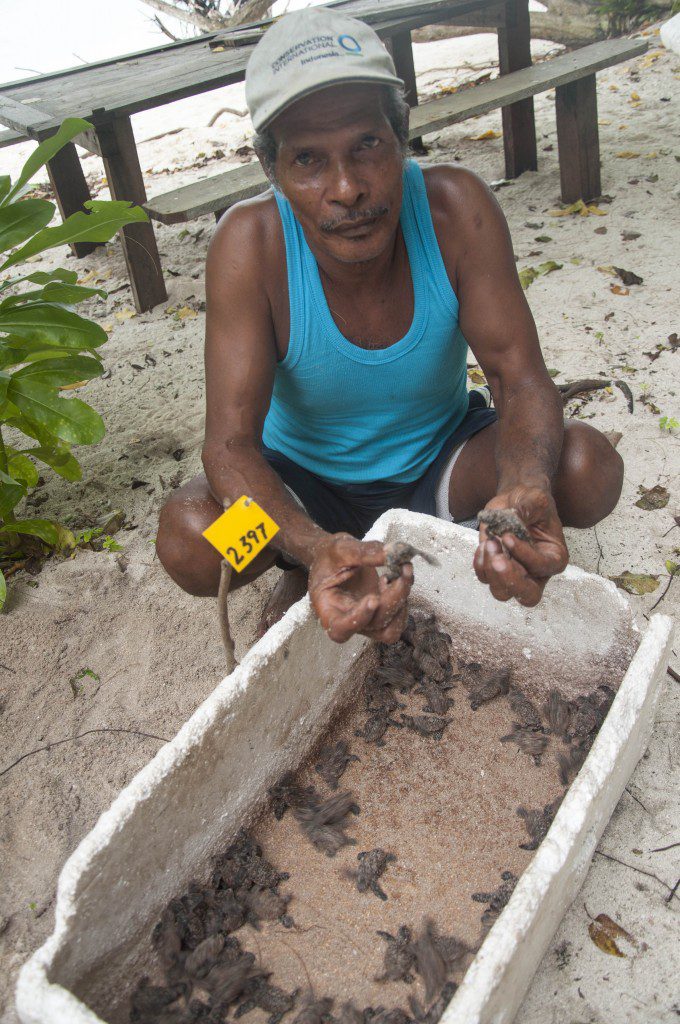 As usual, every night Irisa Sawoka (60 years old) patrols the island to detect traces of turtles that have climbed to the beach to lay their eggs. Assisted by Yohan (40 years old), CI’s staff monitors the beaches trying to use as little artificial light as possible in order not to disturb the nesting turtles. Tete Irisa pioneered nest protection on Venu Island. Despite the fact that he had experience with protecting turtles, his enthusiasm for the project was not dampened. “Eran Jelepi (green turtles) come up most frequently and lay eggs in any season,” he said while digging a hole to move the turtle eggs to a secure location in front of the checkpoint. Other species are seen in October, a prime nest-building month.

At night, after the turtles are identified, the nests are numbered. The goal is to determine the number of turtles that nest and lay eggs on Venu’s beaches. In the morning, the men, armed with a large bucket, transfer eggs from the nests to a protected area. According to Tete Irisa, removing the eggs prevents predators from opening the nests and increases the likelihood of the hatchlings’ survival. Care is taken to move the eggs swiftly in order not to harm the embryos.

Turtle eggs will hatch and the baby turtles will return to the sea in about 30 to 40 days. “Watching the eggs hatch is a unique experience,” said the Kaimana native. Hatchlings know instinctively not to go down to the beach when it is still light. They often peek from the nest but wait for nightfall to scamper to the ocean. We release our hatchlings around 19:00 to avoid the brunt of predators on land and in the ocean. Just imagine, an average nest produces 180 to 200 eggs, but perhaps only two survive to return to Venu and lay their own eggs! Another good reason for protecting this island and the turtles that come here.” 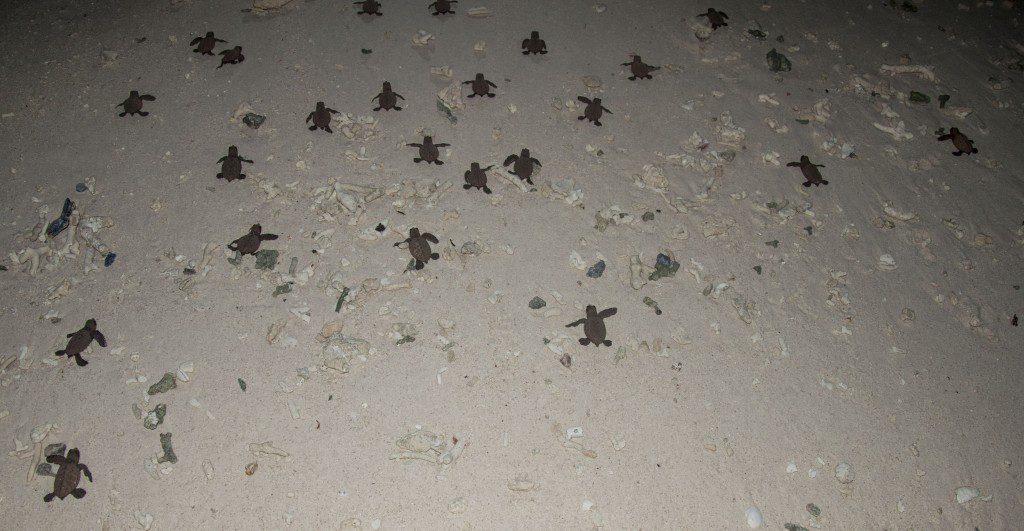 Turtles, Their history and Future

Because of the lack of protected turtle nesting beaches, many nesting areas in Indonesia have been exploited to the point where no turtles return to lay eggs. Looting eggs from nests and hunting turtles for their meat has decimated both Indonesia’s and the world’s sea turtle population. According Tete Irisa, the main looters around Venu did not come from Kaimana or its surroundings, but arrived from distant islands where the turtles already had been wiped out.

Around Kaimana, the numbers of turtles nesting on Venu and other islands nearby begin to shrink. Protection has not been easy. Limited means and knowledge about conservation methods are major obstacles. Initiatives between CI and BKSDA to protect turtle nesting beaches now have the support of the local communities and landowners. Based on CI’s data from 2011 through 2013, turtle nestings have increased to about 2,477 individuals. This positive result is due to the cooperation between all stakeholders who are striving to save Kaimana’s ambassador of the seas. 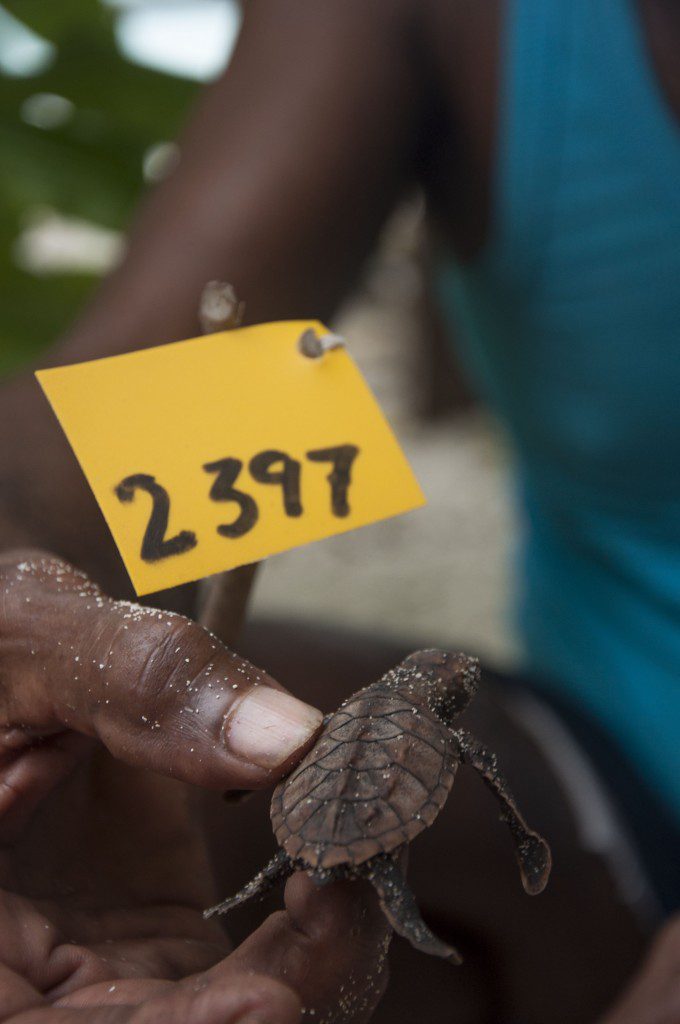