The recent publication of the new reef fish Sueviota tubicola marked an important milestone in my career – my 100th new fish species description, all completed during my 13 years at CI. Human Nature has asked me to reflect back upon these discoveries and share my top 5 favorites. 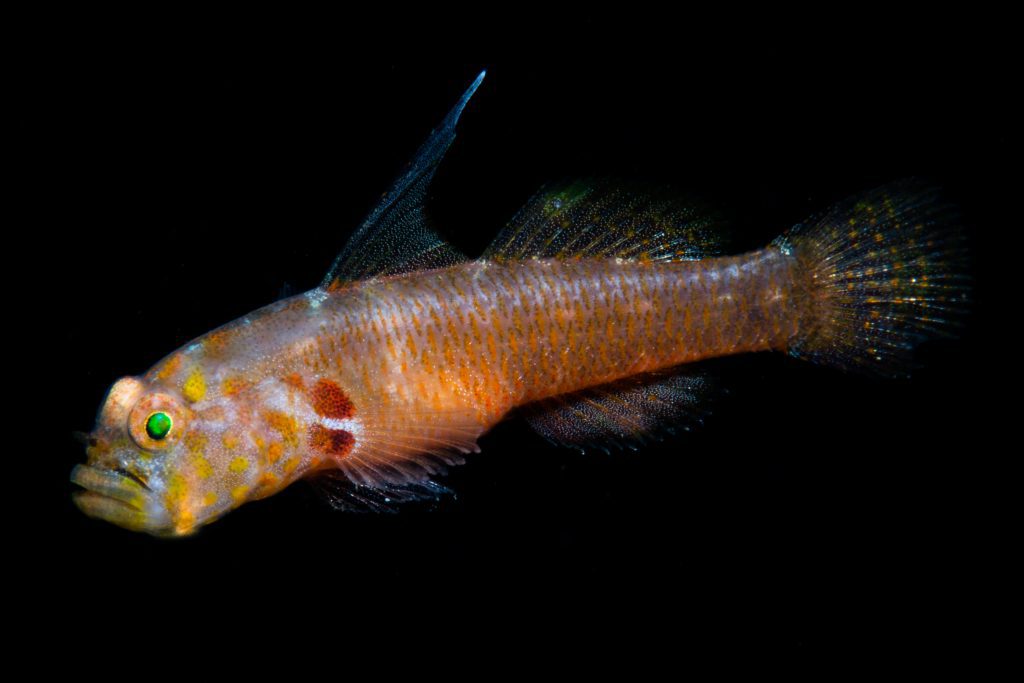 Before I do such, however, I must extend my heartfelt gratitude to my mentor and close friend Dr. Gerry Allen – a longtime CI consultant and world-renowned reef fish expert who is also the lead author on the vast majority of my new fish species descriptions. Within a month of joining CI in late 2004, I was in the water with Gerry for a survey of tsunami impacts on the reefs of Aceh – finding and naming several new fish species in the course of that survey. Since that time, we’ve done thousands of dives together on surveys throughout the Coral Triangle region, discovering on average a new species every month. We’ve also done our best to turn these new species discoveries into conservation action, as I’ll describe more below. So without further ado, on to my top 5 favorite new fish species discoveries:

My first opportunity to leverage conservation results from a new species discovery came with the coral bream we decided to name Pentapodus numberii. This subtly handsome fish is endemic to the Bird’s Head Seascape, and was fitting to name after the honorable Freddy Numberi – the first native Papuan to be made a Minister in the Indonesian government, and in this case particularly appropriate as he was Minister of Marine Affairs and Fisheries. Minister Numberi was already an important ally to our conservation work in Papua, but after naming the new species after him, he redoubled his efforts and shortly thereafter he presided over the declaration of the Raja Ampat and Kaimana MPA networks! 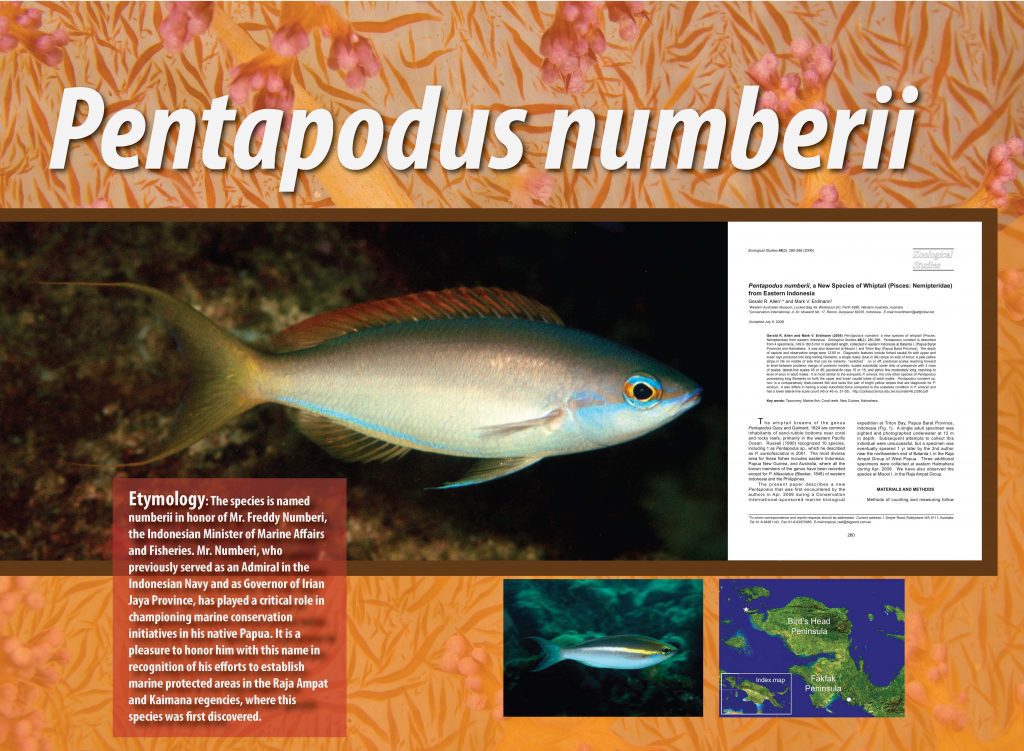 Placard announcing the new species Pentapodus numberii, which was presented to then-Minister of Marine Affairs and Fisheries Freddy Numberi at a gala ceremony.

Shortly after that discovery, another Bird’s Head endemic species we found and described made headlines as the top earner at the “Blue Auction” we held in Monaco, under the sponsorship of none other than HSH Prince Albert II. The charity auction, in which we auctioned the naming rights to 11 new fish species from the Bird’s Head, raised just over $2.1 million in conservation funding for the Bird’s Head Seascape program – with the charming little walking shark Hemiscyllium galei fetching $500,000! Importantly, that funding was used specifically to launch our flagship marine conservation education program, featuring the brightly painted Kalabia ship (named for the local word for walking shark). 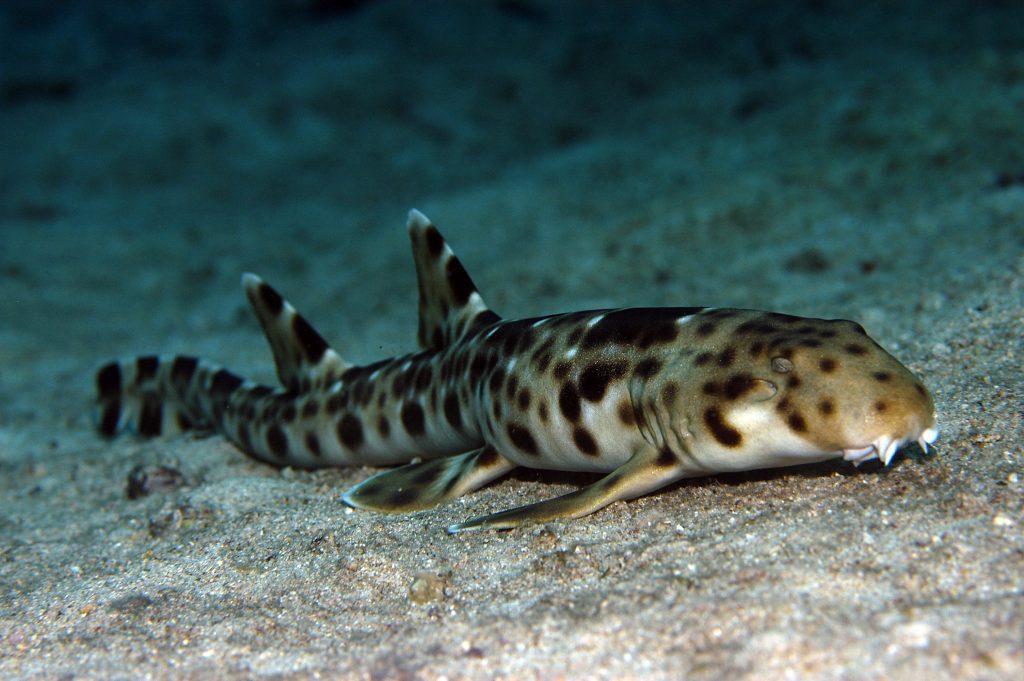 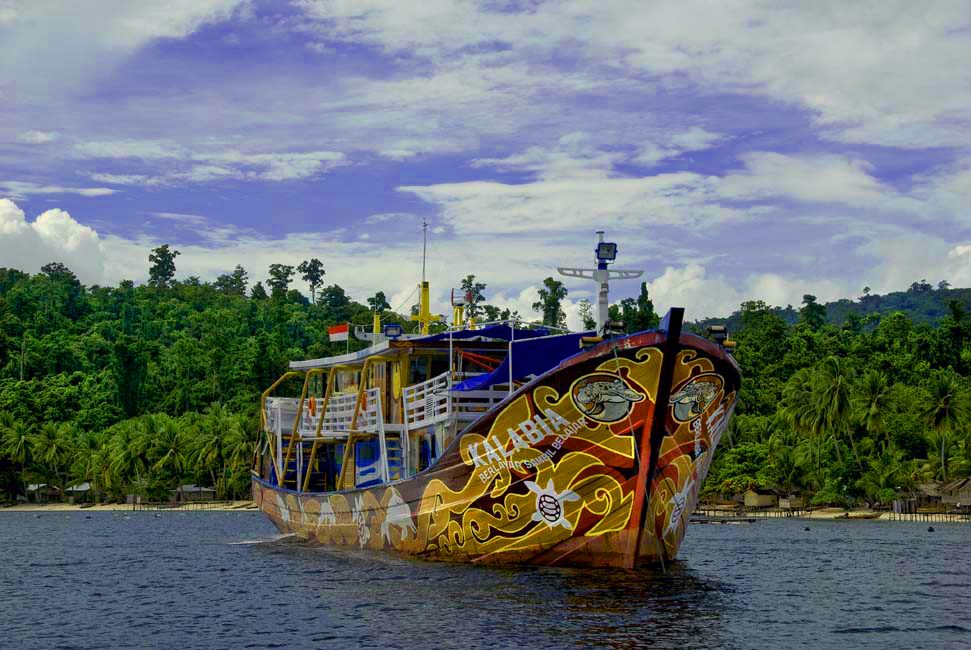 The Cendrawasih walking shark Hemiscyllium galei, and the Kalabia marine conservation education vessel named after it.

Another of my favorite fish discoveries was the Raja Ampat fairy wrasse, Cirrhilabrus marinda. For over a decade, our marine conservation program in Raja Ampat worked closely with the communities and government to set up and implement what can only be described as the world’s most biodiverse MPA network. The strong and unwavering support of the Regent and Vice Regent of Raja Ampat (Marcus Wanma and Inda Arfan) was critical to the success of this decadal effort, and for this I had long been searching for an appropriately showy and beautiful new species to name in their honor. I was delighted to find this stunning new fairy wrasse only a few months before the end of their second and final term in office, and we were able to rush the description in order to present Drs. Wanma and Arfan with their honorary new species (the species name marinda is a combination of their two first names) at their farewell ceremony. As a special treat, were were able to get the Indonesian Minister of Marine Affairs and Fisheries, Ibu Susi Pudjiastuti, to present the new species to them. 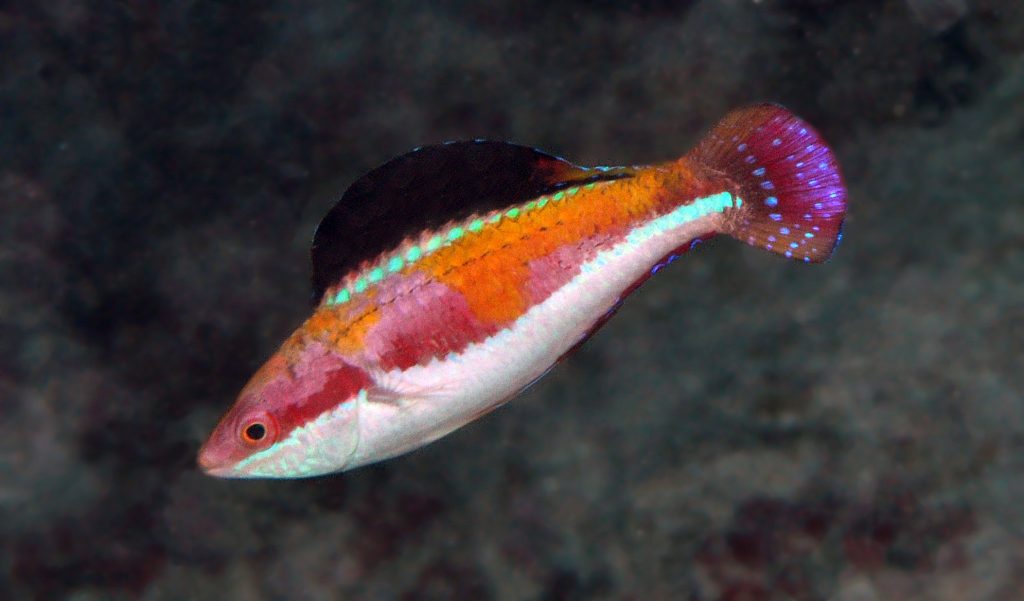 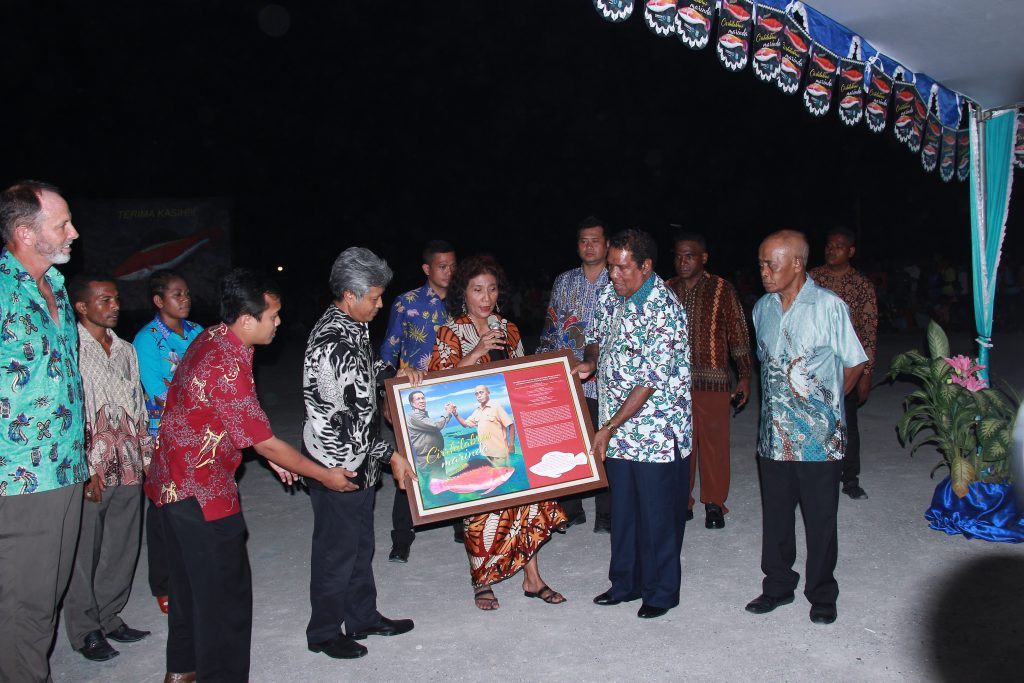 Yet another of my favorite new fish species discoveries was a beautiful tilefish that I found on a deep 230’ dive during our first marine rapid assessment of the Kaimana coastline in the southern Bird’s Head. This striking tiger-striped fish builds large communal mounds of rubble that cover their labyrinthine burrows beneath. It also bears a striking resemblance to another tilefish that Gerry and I described named H. randalli, differing only in the presence of vertical bands on the body. When I first encountered this fish, I had very limited time to safely stay at this depth, and I had to choose between photographing and collecting the fish. I chose to collect it, but by the time I finished my very long dive, the specimen had died, and its stripes disappeared! Gerry was underwhelmed and reckoned I had hallucinated the stripes on the fish, which meant I had to do yet another very deep dive, this time as the sun was going down and our survey time running out, to properly photograph the live fish in its natural habitat. I managed to find another mound and photograph the elusive tiger pattern, and Gerry decided on the spot to name the new species after me! 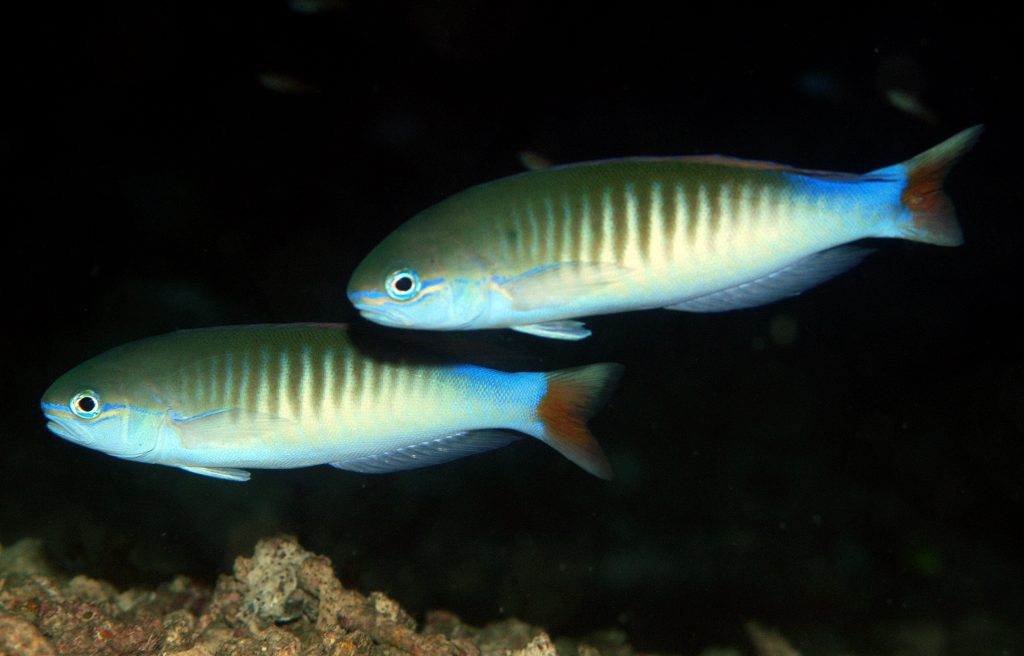 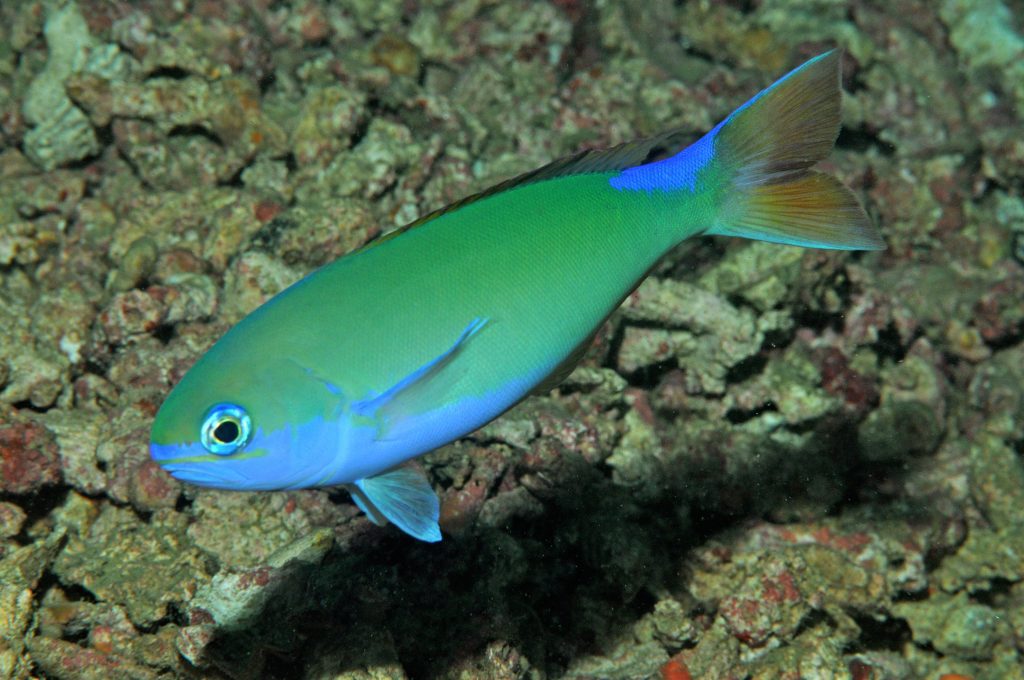 The final new species I’ll mention is the coral dwarfgoby that we named Eviota santanai, in honor of Nino Konis Santana, a national hero in Timor-Leste’s struggle for independence who was also renowned for his environmental awareness. We found this gorgeous little goby while conducting a marine rapid biodiversity assessment of the Nino Konis Santana national park in Timor-Leste, and actually collected the new species just in front of Santana’s birthplace. Naming the fish after Santana seemed a natural choice, but we were quite overwhelmed with the emotional and proud response this garnered in the tiny nation of Timor-Leste. It’s fair to say that this new species helped catalyze a strong community commitment to protecting and managing Timor-Leste’s first national marine park! Which to me is a poignant reminder that biodiversity and species DO matter to many people, and can in fact be a great source of conservation inspiration! 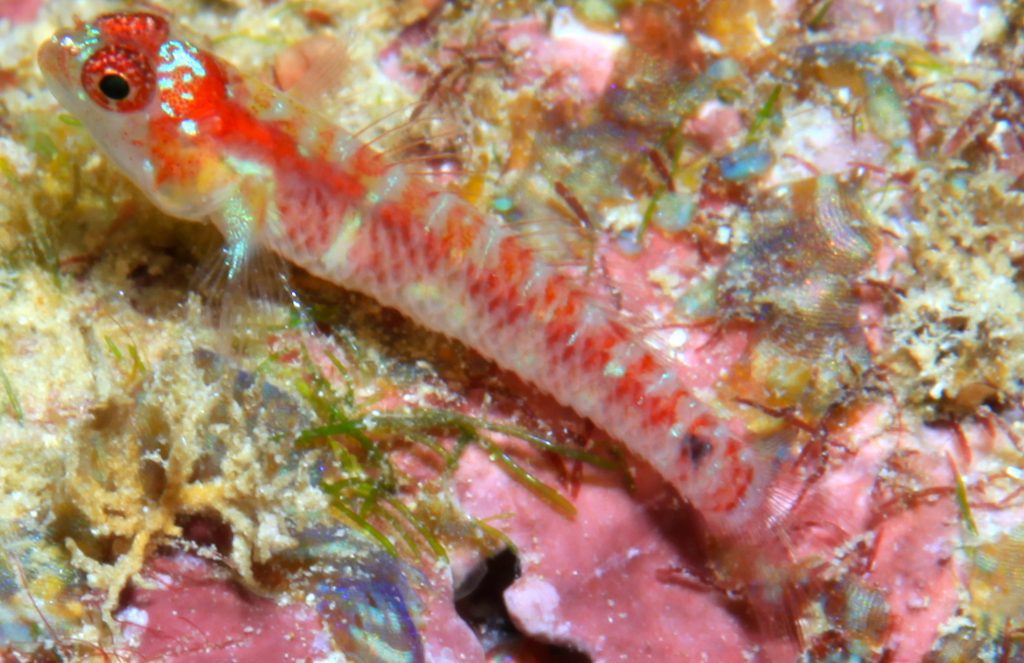