Our team has just returned from another great week monitoring the whale sharks of Bicari Strait in Kaimana. It was again a successful trip, as we identified another new individual to add to our population database of the area! We seem to find a new one every time we head out there. As all the individuals in our database, and most of the individuals in other whale shark aggregation sites, this new individual was a male. Based on his relatively small size, measuring approximately 4.5m, and the fact that it was the first time he was sighted, we could conclude that he just recently emerged from the deep blue. It is predicted that young whale sharks reside in very deep waters for as long as their small size makes them vulnerable to predators – between their size at birth of 60cm to about 3m. As filter feeders, they are largely defenseless and the only characteristic in their advantage is their enormous size. Once large enough to frighten potential predators, they emerge from the depths to shallower waters to feed on schools of small fish, plankton and other small vertebrates.

Very little is known about whale sharks, especially in terms of their reproduction cycles. We know that whale sharks are ovoviviparous, meaning that young are produced by means of eggs that are hatched within the body of the parent, as in some snakes. A female whale shark measuring approximately 10m was captured off the eastern coast of Taiwan in the late 90’s. When this female was cut open, about 300 juveniles were found inside her, all at very different developmental stages. Some were still in their eggshells, others just hatched, and some already measuring up to 60cm, ready to be birthed. Scientists predict that due to females having very slow reproductive cycles and only reaching sexual maturity at 30 years, the species has evolved to maximize survival probability of their young by birthing their litter over a longer time frame as oppose to all in one go.

During our week out in Bicari Strait, we were able to gather a few genetic samples, one from the new identified individual, and two more from already identified whale sharks. We were also able to tag the new individual with a ‘SPLASH10’ satellite tag. This tag includes sensors to measure depth, temperature, light level and wet/dry periods to determine surfacing. While depth and temperature data is collected, and transmitted through satellites, the actual tag must be recovered in order to retrieve the entire raw archived data set. Often, retrieving these tags that are programmed to pop off the whale shark after a certain time, is quite challenging. While we are notified upon its release, and given a GPS location detected by satellite, these coordinates are not always 100% accurate. Furthermore, once you are out at sea, currents and waves are moving fast and can carry the tag, which is hardly visible (small black plastic device the size of a mug) far from the last recorded GPS location. At times you can spend hours looking for the tag, not to mention during bad weather, which could mean that you wouldn’t even be able to set off in the first place. Our team is extremely committed and hardworking and is always trying their best to retrieve these valuable data rich tags. 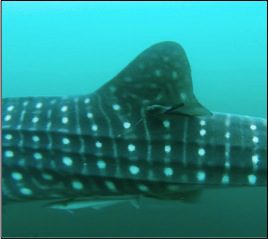 Fig. 2: The SPLASH10 Satellite tag attached to the whale shark.

For the rest of the week we continued monitoring and began socializing the whale shark research program with the locals at the surrounding villages, to inform them of their conservation status and significance, and the importance to protect them. All other whale shark aggregation sites around the world have provided locals with the opportunity to develop a tourism industry. With most of the coastal villages in West Papua living below the poverty line, eco-tourism as an alternative business is an extremely effective way to improve local livelihoods as well as push strong conservation efforts. Nevertheless, much training and capacity building is needed to provide the locals with sufficient knowledge to pursue such endeavors, and benefit from it. While all rays and sharks have been protected through Indonesia’s waters, many locals are not informed about such laws. Thankfully, whale sharks have not suffered a history of being relentlessly hunted as in many other areas in the world such as the Philippines. There are a few exceptions, but in most cases, locals see the whale shark as a positive sign, correlating its presence with the presence of many smaller fish – a promising sign to go fishing. They have even given it a local name: “Induk Ikan” meaning “Mother of all Fish”. We are pleased about the positive reaction from locals towards our whale shark research program, their understanding of the species’ importance and hope that this information will filter through surrounding local communities, raising awareness and understanding. We are also extremely happy about the constant arrival of new individuals in Bicari Strait, expanding our resident population database and providing evermore-promising potential for a sustainable whale shark tourism industry. Towards the end of the year we will receive the first batch of analyzed data from our already retrieved tags and be able to study the movement of these giant fish. Of course we anticipate continuous tagging and genetic sampling over the next years to develop comprehensive data on the whale sharks of Kaimana.

Carla Kerstan is a Bali-based environmental biologist and consultant for Conservation International.