Ecotourism in Raja Ampat—Defender or Destroyer of the World’s Richest Reefs? by Chloe King

Ecotourism in Raja Ampat—Defender or Destroyer of the World’s Richest Reefs? 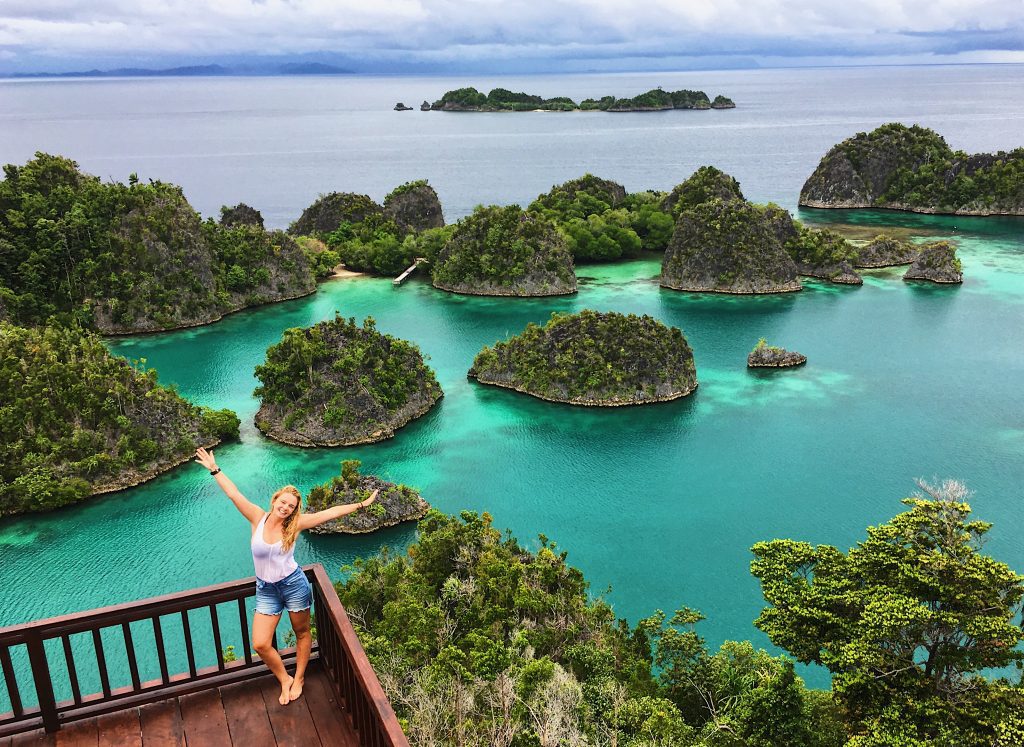 Being a tourist! At the Fam/Penemu Observation Platform ©Chloe King

Tourism is threatening Raja Ampat. On March 4, 2017, a British cruise ship ran aground on a coral reef in Raja Ampat, destroying more than 18,000 square meters of reef off the island of Kri, one of the many in Raja Ampat but among one of the most visited areas by divers and tourists. Reports from the incident vary, from carelessness of the crew to changing weather conditions. Regardless of the reasons behind the destruction, the result illuminates a broader trend in Raja Ampat: the epicenter of global marine biodiversity is increasingly under threat from the tourism that once saved it.

Raja Ampat. Raja Ampatis an archipelago of 4.6 million hectares in northern West Papua, Indonesia, and contained within its waters are over 1,500 fish species and 75 percent of all known coral species—the highest biodiversity within the Coral Triangle region.[1]Conservation International, along with various other NGOs and government agencies, began the Bird’s Head Seascape Initiative in 2004 in order to establish a network of 12 marine protected areas (MPAs), covering more than 3.6 million hectares in one of the most ambitious conservation projects of its kind.[2] 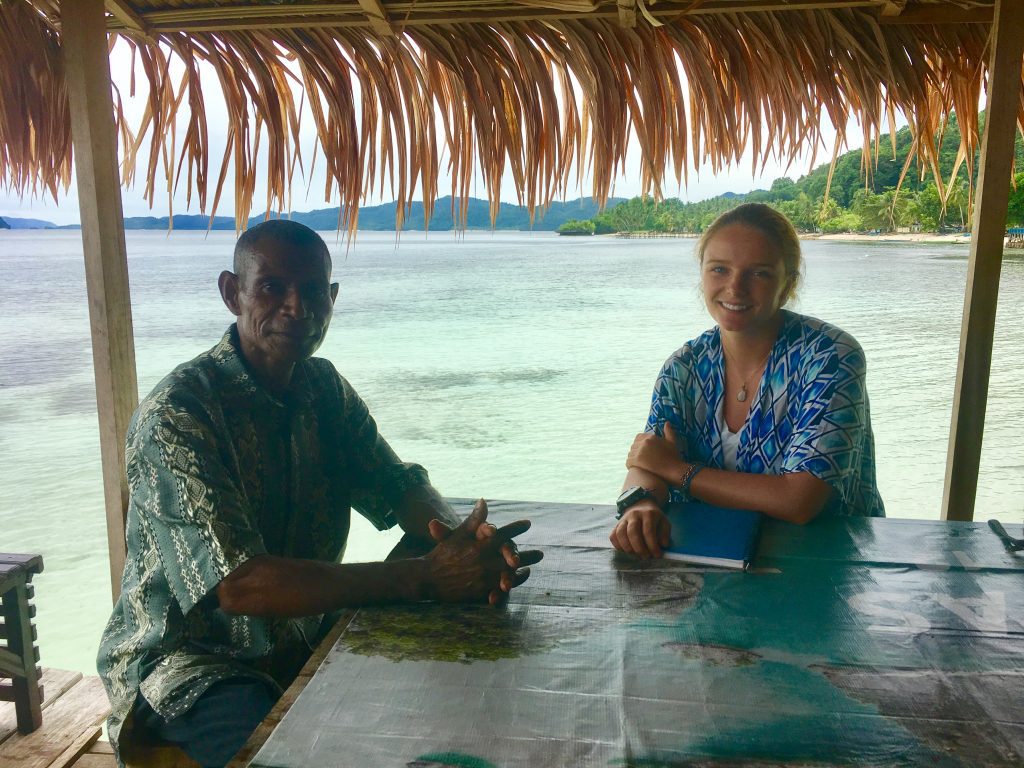 With a village elder during her research ©Chloe King

Traditional conservation methods have saved the reefs. In 2007, the initiative successfully advocated for the local government to formally recognize the traditional conservation systems employed by the communities. As a result, Raja Ampat designated the rights and responsibilities to the seas surrounding their communities to the communities themselves, recognizing the traditional marine regulation systems (Hak Adat) that the 132 villages of Raja Ampat still employ.[3]Part of this regulation is the concept of sasi laut, which can be translated as “taboos of the sea” or sometimes as “oath/vow.” More broadly, it is a tradition aimed at sustaining natural habitats, and has been practiced in Raja Ampat for centuries, if not millennia.[4]

One interviewee noted that while this concept was deeply rooted in ancestral tradition, its practice had been lost in modern times.[5]Yet NGO efforts helped to both revive sasiand link it to the new emerging economy, principally tourism. Sasi became a way for communities to protect the reefs that were becoming increasingly essential to the local economy. Through a combination of communal pressure and spiritual significance,sasi laut has been a central factor in combatting environmental degradation, and one that tourism has helped to strengthen over time.

Indeed, tourism is more important to the local economy than ever before. About 15,000 tourists (including 6,000 domestic visitors) traveled to Raja Ampat in 2016, up from just 5,000 in 2005, and tourism continues to grow at unprecedented rates. Since the creation of the MPAs and tourism development, poaching by outside fishers has declined by 90 percent, and illegal fishing—such as the use of dynamite and cyanide—has decreased significantly.[6]While by no means a perfect conservation success story, the efforts of local communities and NGOs to preserve the rich ecosystems through ecotourism initiatives provides an important example for future conservation initiatives. 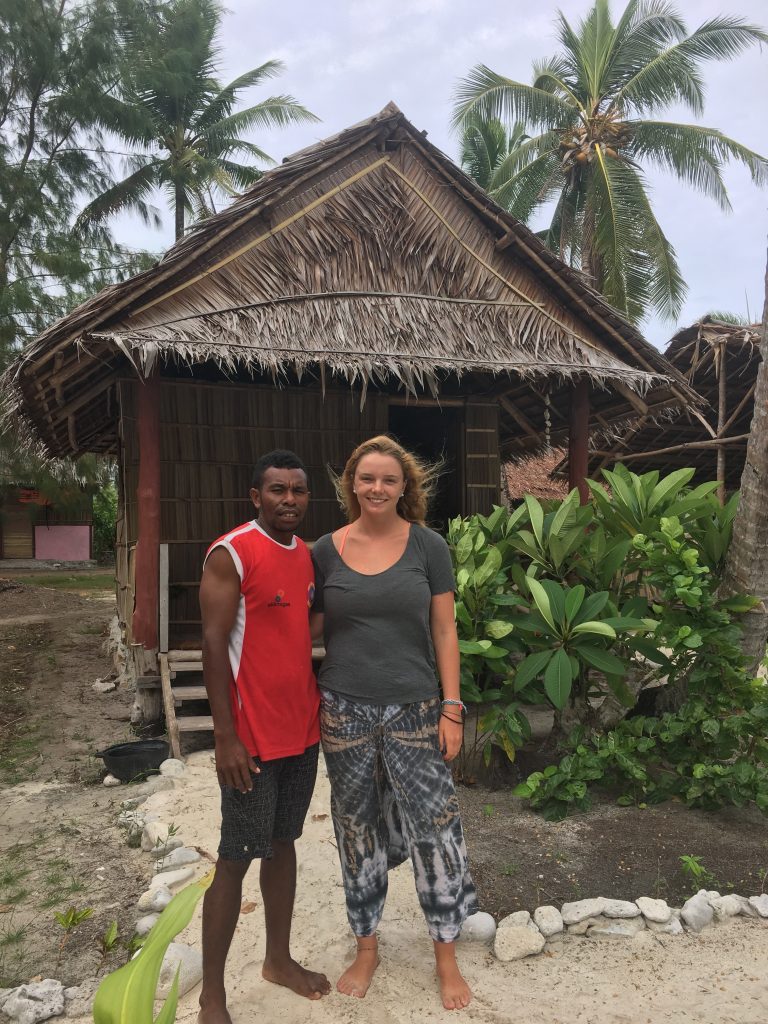 At a “homestay” ©Chloe King

However, tourism development did not begin with local people. Like many tourism destinations worldwide, the first stages of tourism development in Raja Ampat were initiated principally by foreigners. Even today, the majority of high-paying, high-skilled jobs such as dive guide or captain are often occupied by Indonesians not native to West Papua. NGOs have had a critical role in ensuring that the native Papuan population is empowered to take advantage of the tourism industry. This was due in large part to the creation of a homestay network assisted by the organization Seventy Three, an NGO that works globally to supply advisory and training services for business development.

Local homestays are taking back the tourism economy. SeventyThree spent several years guiding community dialogues and encouraging local people to identify solutions to their issues. Thus, the Raja Ampat Homestay Association (RAHA) was created, a not-for-profit organization that coordinates visiting tourists with local homestays all around the archipelago. Over four years they have seen livelihoods improve dramatically and watched as local communities stopped selling their land to foreign resorts, a practice that had cut off countless people from future economic opportunities. According to Seventy Three’s 2016 report, “In four years, the Association’s members have built an ecotourism sector consisting of over sixty, family- run homestay businesses, with an annual turnover of USD 1.5 million” (Wells et al., 2017). In 2017, there were more than 100 homestays in Raja Ampat by official government records, and the industry continues to see positive growth.

The organization provides English language, hospitality, and culinary training, but they are strategic in limiting their presence and allowing community empowerment to grow naturally. In many ways, the association is actively cultivating a working relationship with locals that goes against the colonial legacies of the past. Much of the methodology used in establishing the Association was to allow locals to identify their own problems and own solutions, rather than relying on outsiders to do it for them—something that many communities in Indonesia have become accustomed to, due to the scars of lingering poverty and outsider interference. 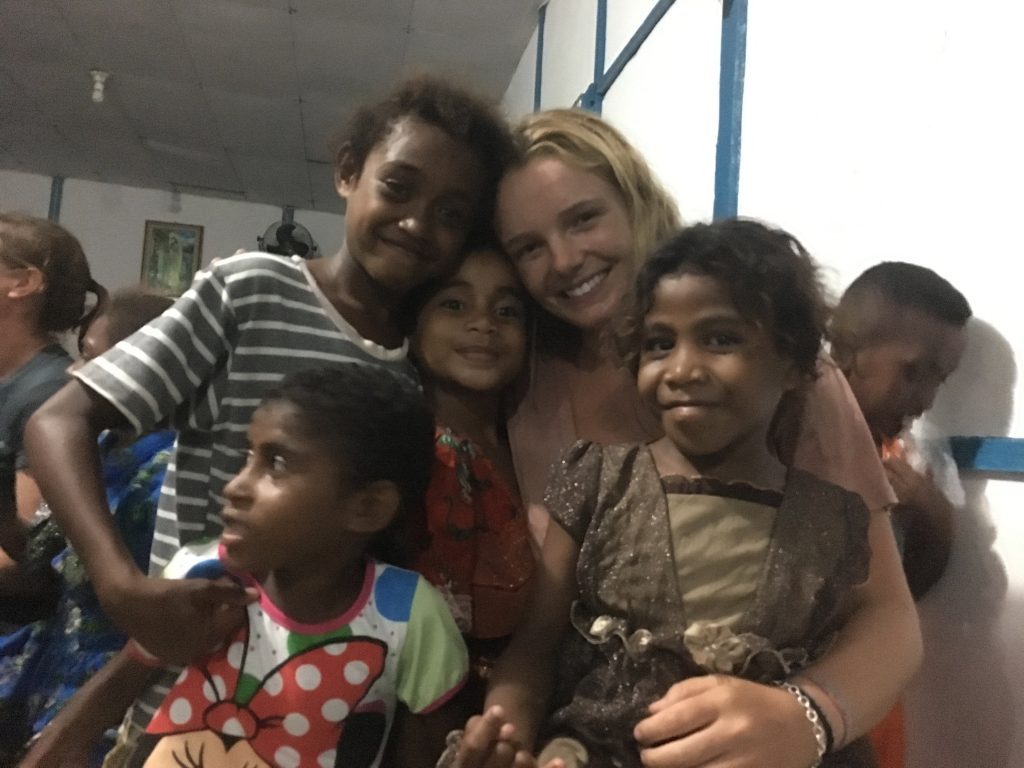 Tourism is providing an informal enforcement mechanism against illegal fishing.As one homestay owner noted, “Since they built resorts and home stays – people cannot use potas[chemical substance used for catching fish – usually illegal], cannot use bombs. In 1970’s people still used bombs because there were no resorts and no tourist coming. We thank tourists, because of their coming, we can keep our nature well.”[7]

The creation of local homestays has encouraged the revival of traditional practices that are critical to the success of homestays, such as sasi laut discussed previously. Homestay owners employ sasi in the areas surrounding their land in order to create a small marine reserve for guests. As a result, many people have reported a significant decrease in practices such as dynamite fishing around areas with concentrated homestays. 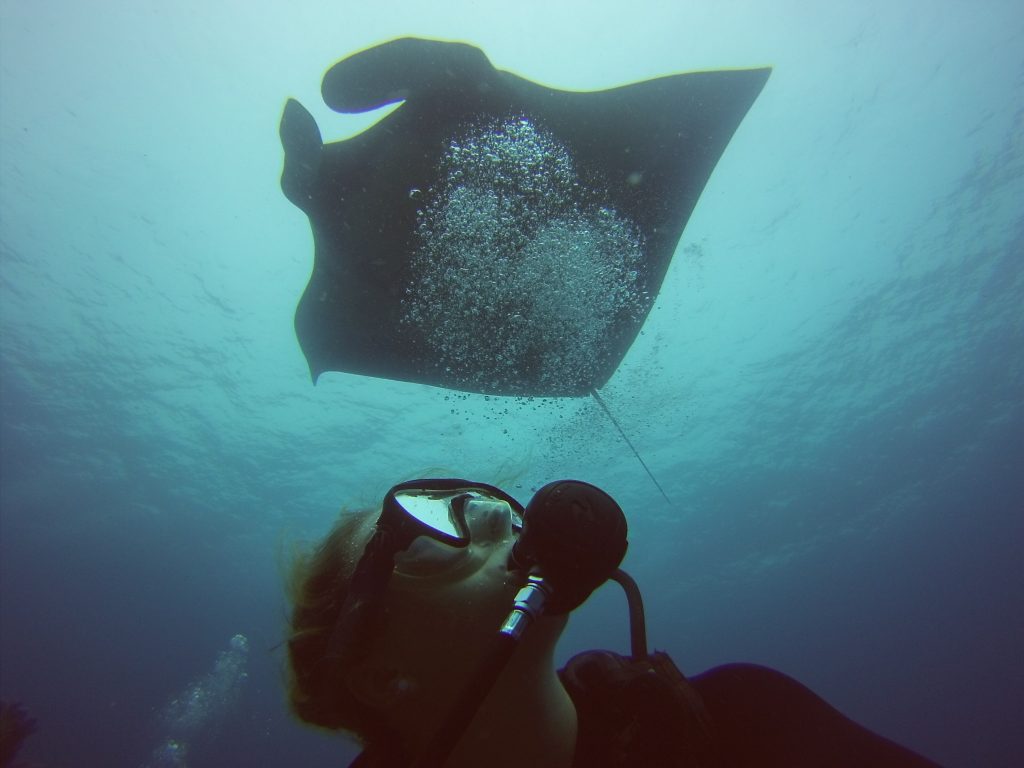 The downside of tourism. However, despite the incredible benefits the homestay network has provided for local economies, unchecked growth of homestays can ultimately harm many surrounding ecosystems. Several interviewees noted that lack of waste infrastructure around the homestays is threatening the reefs. While tourism is increasingly seen as essential to protecting this rich environment, no one can know the harm it could cause in the future.

In one interview with a dive operator in Raja Ampat, one of the staff members described the change in the reef: “People who came here just one year ago can already see the reef changing, becoming worse.”[8]Likewise, another community member on the island who was also a dive guide said, “Five years ago we would go diving just off the shore, we would find nudibranchs and ghost pipe fish… Now it’s all just rubble.”[9]Another interviewee claimed that the destruction of reefs close to shore came from speedboats that park on the beach, breaking coral and dragging sand out over the reefs when they leave.[10]Such fragile ecosystems may not be able to sustain the tourism growth at its current rate, yet the government has indicated no signs of halting it.

As Morrison in the travel magazine Wanderlust notes: “It’s a sadly familiar cycle. After the explorers come the travellers. After the travellers come the tourists. And after the tourists come those blasted explorers once again, this time heading up some conservation group to wail about the exploitation of a once virgin paradise.” NGOs in Raja Ampat were instrumental in drawing international attention to the area and later began to advocate that the government needed to restrict tourism numbers so as not to harm the fragile ecosystem. Once again, NGOs are instrumental in both opening up these destinations and allowing the local populations to have full control over how, when, and by whom these destinations are visited.

This precarious balance between sustainable development and overdevelopment can be seen time and time again in destinations all over the world. No matter how well-managed this development is—by NGOs, government, or local communities—ecosystems can still be damaged, and large portions of the population may never even benefit from the influx of tourism. Mark Erdman, the principal director of Conservation International’s initiatives in Raja Ampat, noted in an interview that the new target for CI will be “marine tourism management” because after more than a decade of tourism promotion, now “it got to the point where it is as much a threat.”[11] 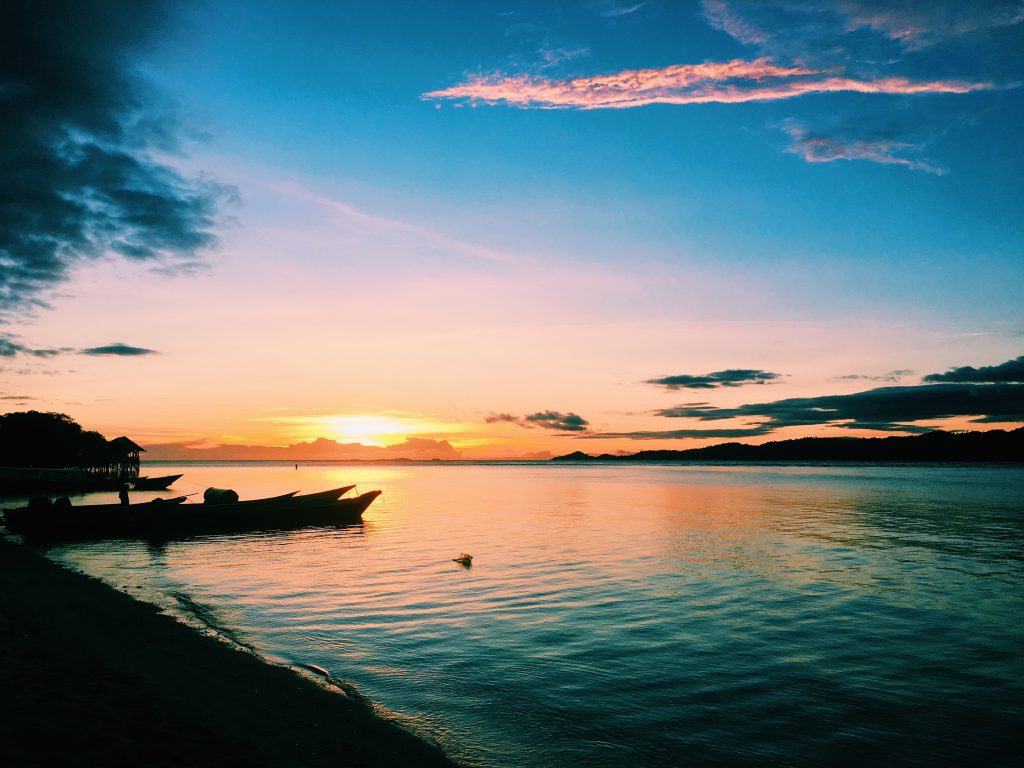 The future of tourism. For many, Bali is still the image that comes to mind when thinking of Indonesia: white sand beaches, temples perched on clifftops, volcanos carved by cool streams. Increasingly, these images are becoming inconceivable: beaches littered with plastic bottles, temples surrounded by screaming children and selfie sticks, rivers carrying all manner of pollution out to sea. Thanks to efforts by the Indonesian government, images of Raja Ampat’s islands sprouting from a deep blue sea are being promoted as the “new” face of the country’s tourism. Will ecotourism help keep the waters of Raja Ampat clean, or will it face the same fate?

Chloe King is a senior at George Washington University in Washington, D.C., studying international environmental studies and sustainability. She has worked in Thailand, Indonesia, and the Philippines as a PADI Divemaster, and researched and studied the effects of tourism on coastal communities across Indonesia as a Boren Scholar. She has also worked with the World Wildlife Fund for over two years on food waste initiatives in K-12 schools in DC, and founded the business Last Call in 2017 to address restaurant food waste and local food insecurity. You can follow her on Instagram, Twitter, and LinkedIn: @chloeking313.