This is the part #3 of Dr. Smith’s Natural History Notes: A BHS exclusive!

Parasites permeate every corner of the animal kingdom; indeed, even parasites have their own parasites. With one of my PhD colleague’s research focusing on coral reef fish parasites I started to pay more attention to these sinister members of the community. Now I can hardly do a dive without coming across a stricken fish or other reef creature that is suffering at the hands of one of these insidious but fascinating beasts. 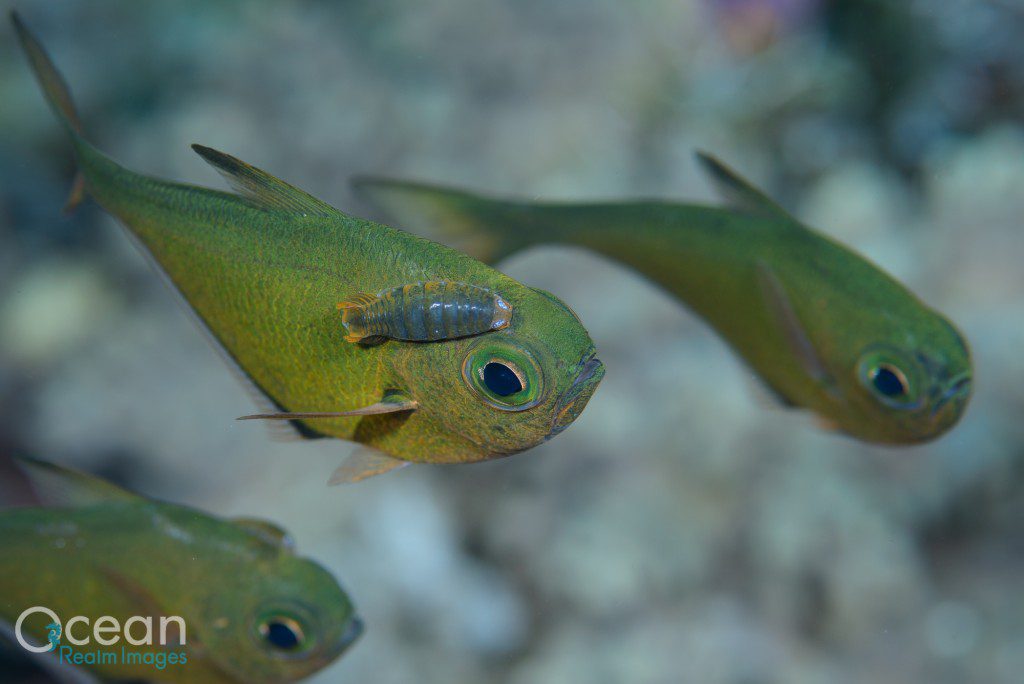 Sweeper with a green coloured isopod.

In January this year I was aboard Dewi Nusantara for my charter exploring Raja Ampat’s southern reaches and the island of Kofiau. As always, I gave lectures about the area’s marine life, so my regular guests are well aware of my penchant for external parasites. Several even come up from their dives regaling me with stories of how many they’ve seen: there is a funny ecological quirk whereby if one fish is infected often a large proportion of the same species locally also will be. According to my colleague, this is because these parasites ‘burst’ spawn and their offspring will infect many other individuals around the same area. 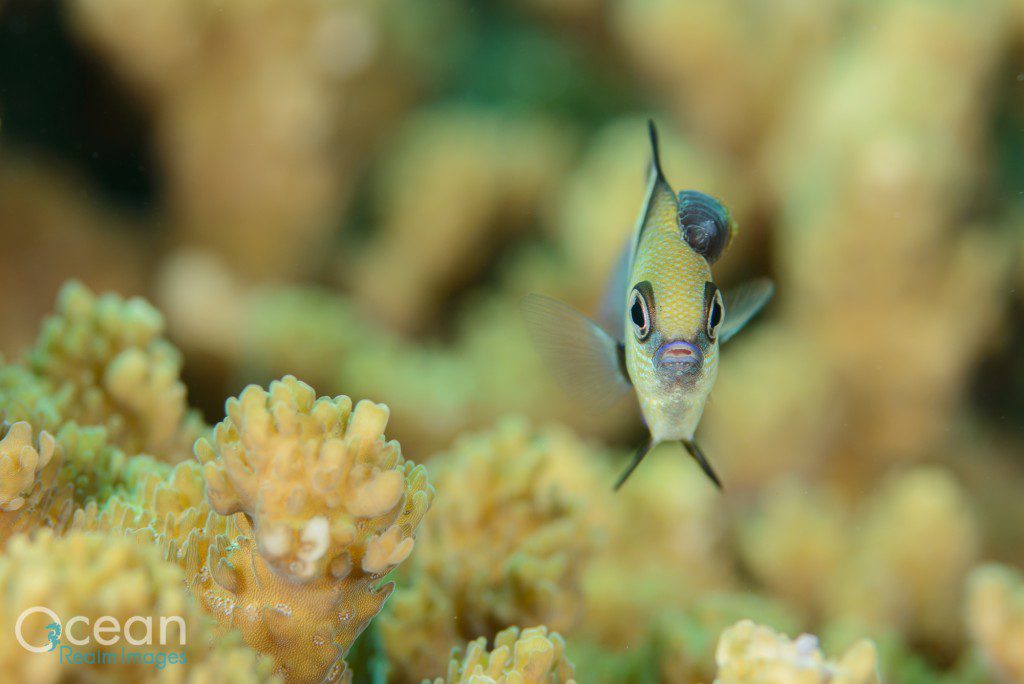 A small dascyllus with an isopod parasite.

Parasites are extremely common on coral reefs. Some bite and gorge themselves on blood very rapidly then drop off, whilst others grip on their host for their whole adult life. The external parasites that have been the focus of my natural history notes of late are isopod crustaceans, which are basically marine pill bugs (woodlice for the Brits, or sea lice to anglers), found in the family Cymothoidae. They are extremely species and site specific, usually found in the exact same location on just one host species. Some attach themselves externally to scales, others are flesh burrowing (I saw some of these in temperate Australia recently, and they made me feel quite queasy), some attach to the gills and others live in the fish’s mouth.

Most recently, amongst one of the enormous schools of passing fusiliers at the dive site ‘Boo Windows’, something caught my eye under one of the fish’s chins. When I was able to get a closer look at a cleaning station I saw that the stricken fish had a huge white isopod parasite clutching to the underside of its head. It had obviously been there sometime, as the fish was slightly deformed where the parasite’s little legs were latched on. There was even a groove for the parasite to rest. 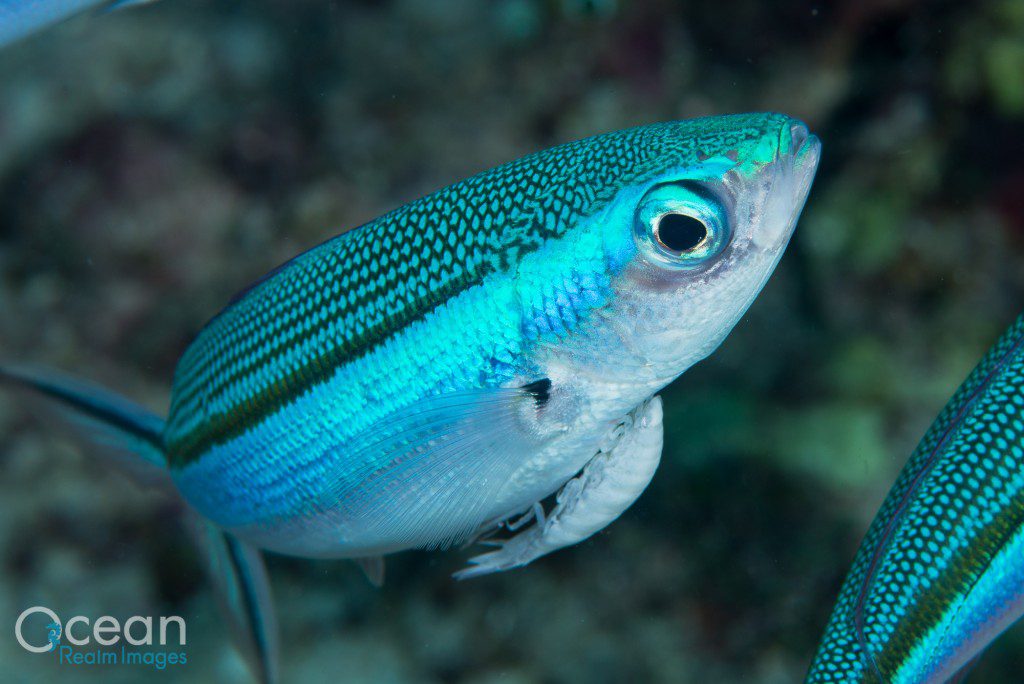 Blue-streaked Fusilier with a cymothoid isopod parasite under its chin. 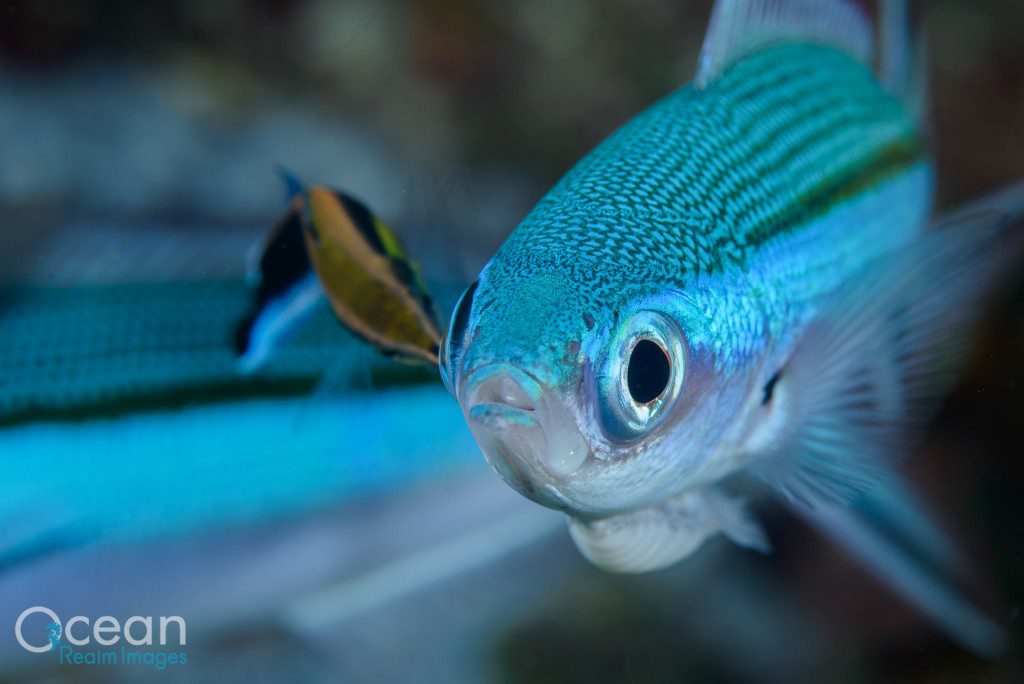 This cleaner wrasse was completely outmatched by the size of the parasite.

Whilst many of these copepod parasites are dark in colour, I was interested to see that this one was white. Fusiliers’ type of colouration is known as countershading, whereby their belly is paler than their dorsal surface. This helps to camouflage them against predators from above, as their dark top-half acts as camouflage against the darker water below. Contrastingly, the pale belly camouflages them against predation from below against the predators looking up at the bright sky. The parasite appears to have followed suit and matches the fish’s paler ventral colours. Through natural selection, one would assume that fish carrying dark parasites would more likely be eaten than those carrying pale chin parasites. The pale parasite is less likely to draw the attention of their host’s predators. Since this would also mean that the parasites too are less likely to be eaten and are thus able to pass on their genes, eventually a pale parasite has prevailed. 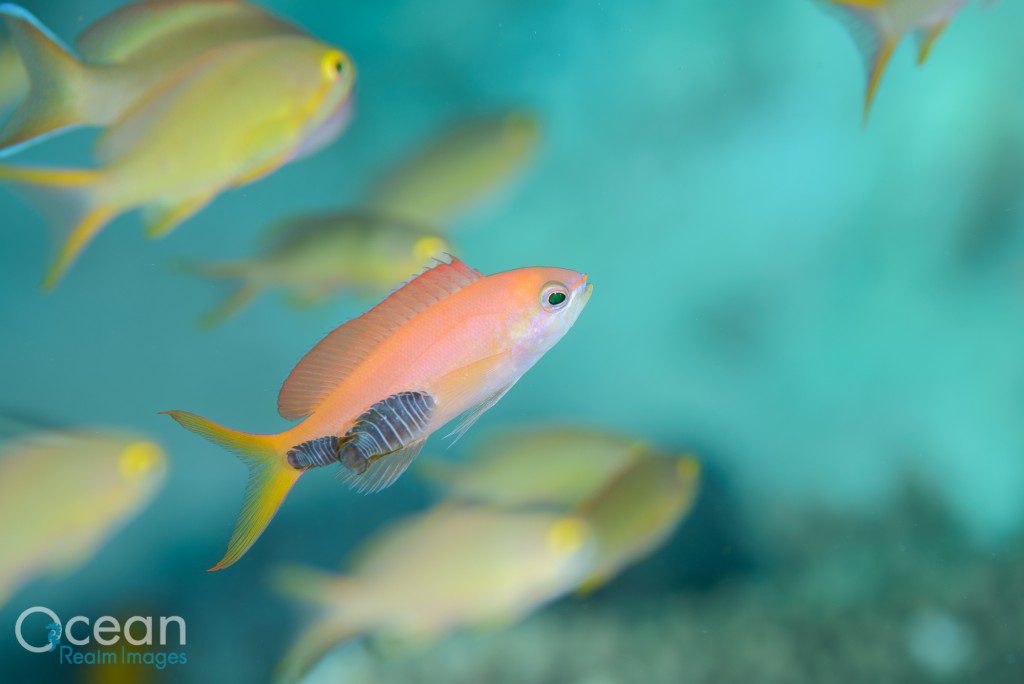 An anthias with a mated pair of parasites. These were living only in this location on the rear flank of the fish.

I was intrigued to see only one isopod living under the fusilier’s chin, but in one of my images I discovered that there was actually another smaller individual living under the larger one. The bigger of the two is the female, and the tiny one beneath is the male. Since he is hidden under the large female’s tail, he is dark grey in colour. After mating, the eggs of cymothoid isopods develop in a pouch on the female’s body. There the young hatch and undergo their first moult. The active and agile young then leave the brood pouch and go in search of a host of their own. They have well-developed eyes, helping them to track down a host. Between leaving the mother’s pouch and making permanent attachment on their new host, they undergo several moults. Each stage is perfectly adapted for the job the larva needs to complete. Sensory structures come and go and at the last stage grasping claws appear, which help their final attachment to the host. 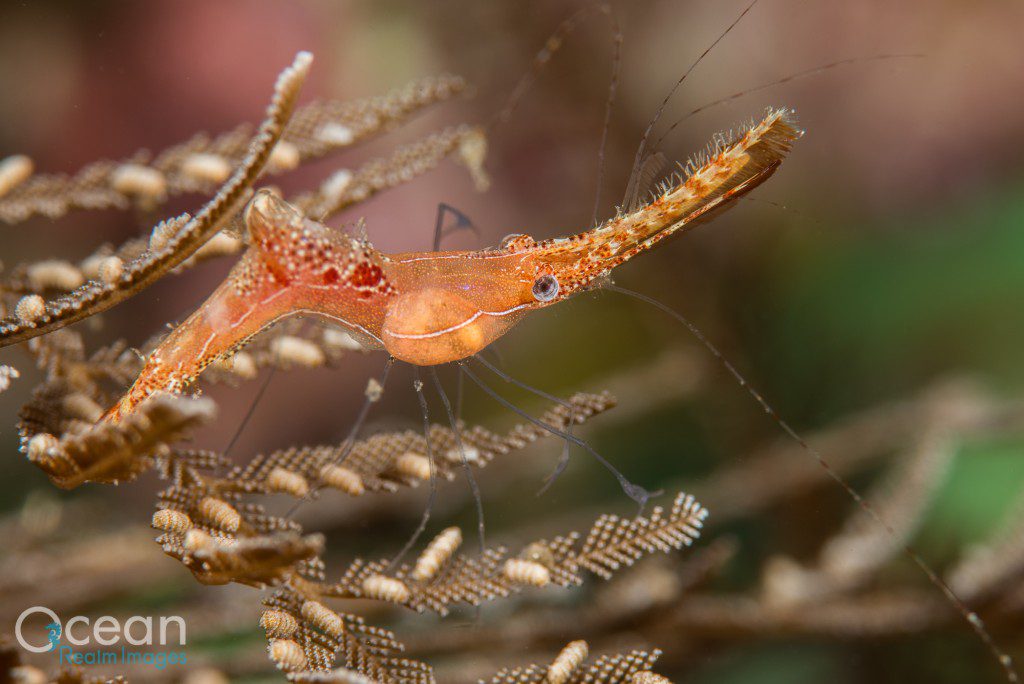 These isopod parasites are common on the reef and infect many different fishes; however, they are not only limited to fishes. There are certain species that also inhabit the gill arches of crustaceans. Whilst they look punishing for the host, parasites generally don’t kill them. They can cause lesions, reduced their growth rates and make them weak and more prone to illness or predation, but the parasite wouldn’t actually benefit from the host’s demise – they’d lose their home. Some parasites have extremely sinister tricks up their sleeve to ensure that they alone are looked after. Certain parasites are able to sterilise their host, so the host producing its own offspring does not waste vital energy. 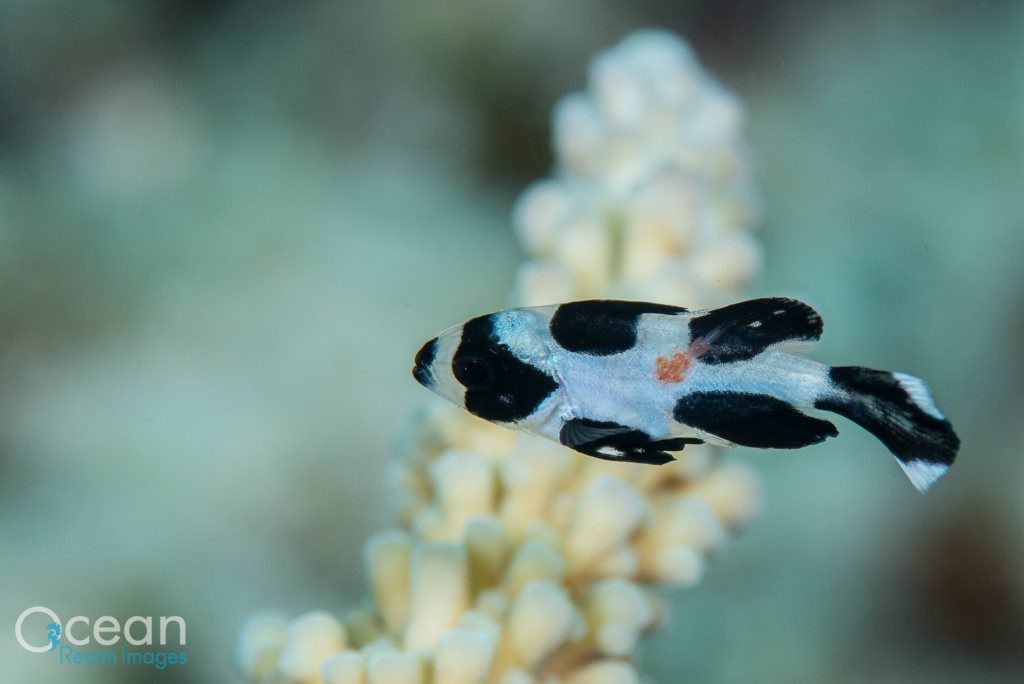 Even small juvenile fishes can be attacked by parasites.

Next time you are diving in Raja Ampat, I suggest you keep you eyes peeled for these sinister hitchhikers living on the reef’s creatures. Unsurprisingly, there are more species of these parasites in the Coral Triangle region than anywhere else on Earth. After all, they too help add to the extraordinary number of species that make coral reefs one of the most biodiverse ecosystems on the planet.