This is the third post in the series, introducing the “team” charged with conservation in the BHS.  These are the unsung heroes that you and the Bird’s Head Seascape depend on!

Meet Abam Sianipar, CI’s Elasmobranch Conservation Management Specialist! Originally from Bandung, Abam grew up surrounded by the Parahyangan mountains hiking and exploring West Java at altitude. Abam began university in 2004 at the prestigious Bandung Institute of Technology (ITB) where he studied ecology and biosystematics. Curious to explore the natural world beyond his home in the mountains, Abam turned to the sea, conducting his undergraduate thesis research on reef sharks in Raja Ampat. 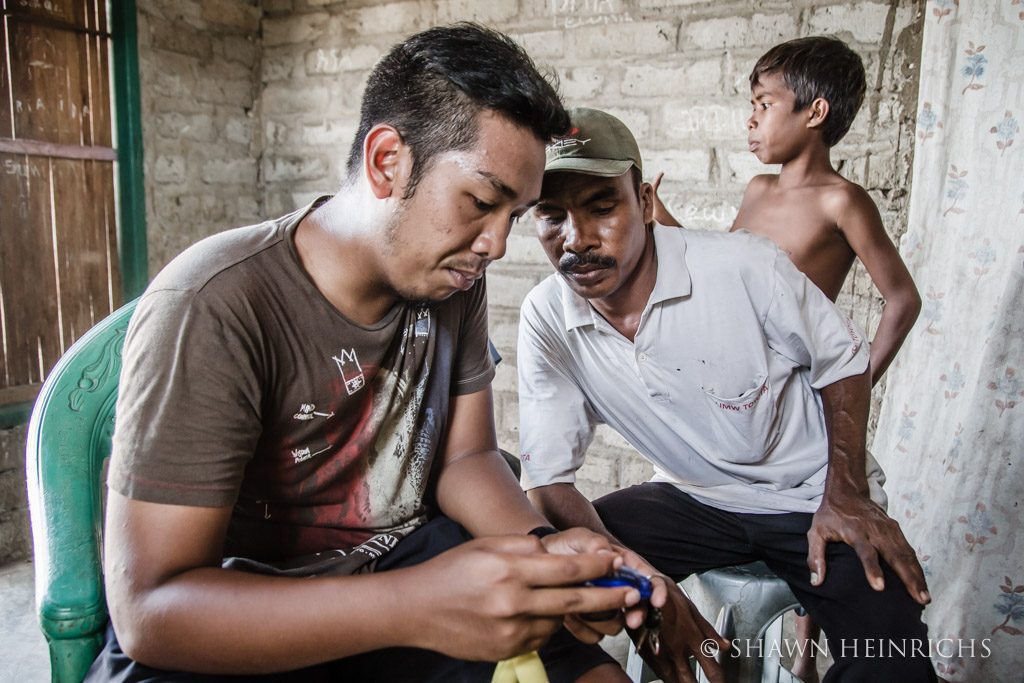 During a brief stint as a Marine Biodiversity freelancer in Bandung, Abam interviewed for a position with CI’s Bali office to support their Marine Protected Area (MPA) team. In the end, this turned out to be the best job he never got! Through the interview process, Dr. Mark Erdmann recognized Abam’s enthusiasm and expertise for sharks and recruited him as the first employee fully dedicated to CI’s newly established Elasmobranch Program. Abam’s work in this role began with drafting a scientific paper for the government on protecting manta rays, hammerhead and oceanic white tip sharks. The current Indonesian laws fully protecting manta rays and banning the exportation of hammer head and white tip sharks heavily depended on Abam’s work in his first year at CI. 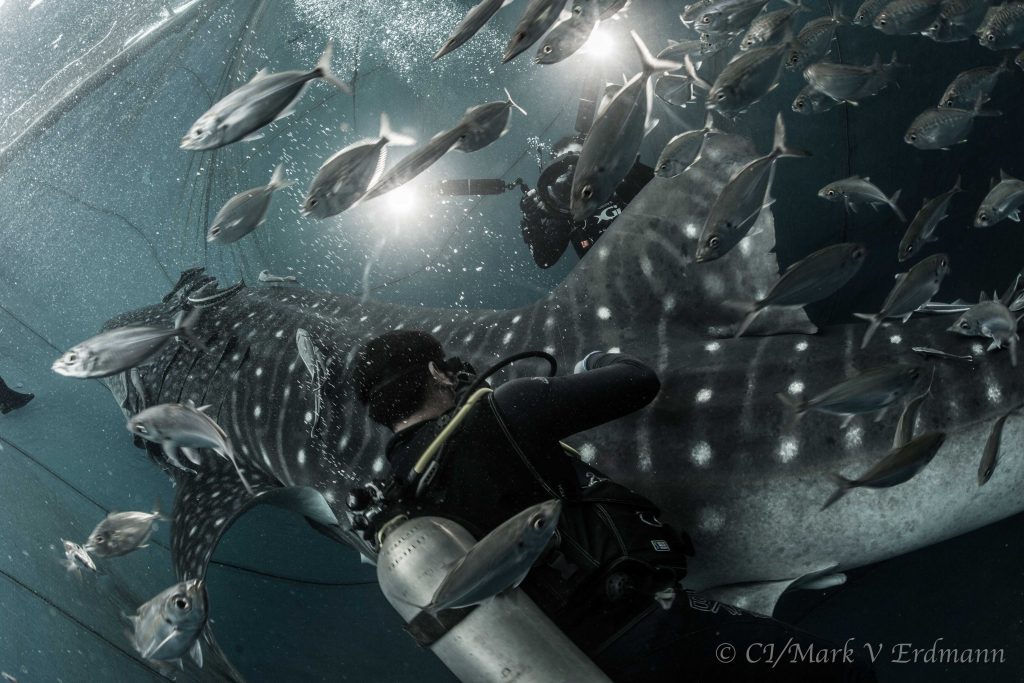 For nearly six years Abam has been building CI-I’s Elasmobranch Conservation program into the incredibly successful program it is today. He has established an Indonesia-wide manta ray satellite tagging project (2014), developed a new method to mount tags on the dorsal fins of the world’s largest fish (whale sharks) in a way that allows the tag to send data to the satellite for 2 years – before growing out of the fin, causing no long-term damage to the animal, performing the world-first wild whale shark health assessment in collaboration with Georgia Aquarium, and with his scientific expertise and experience in the field, helping the Ministry of Marine Affairs and Fisheries
to further protect Indonesia’s shark and ray populations. 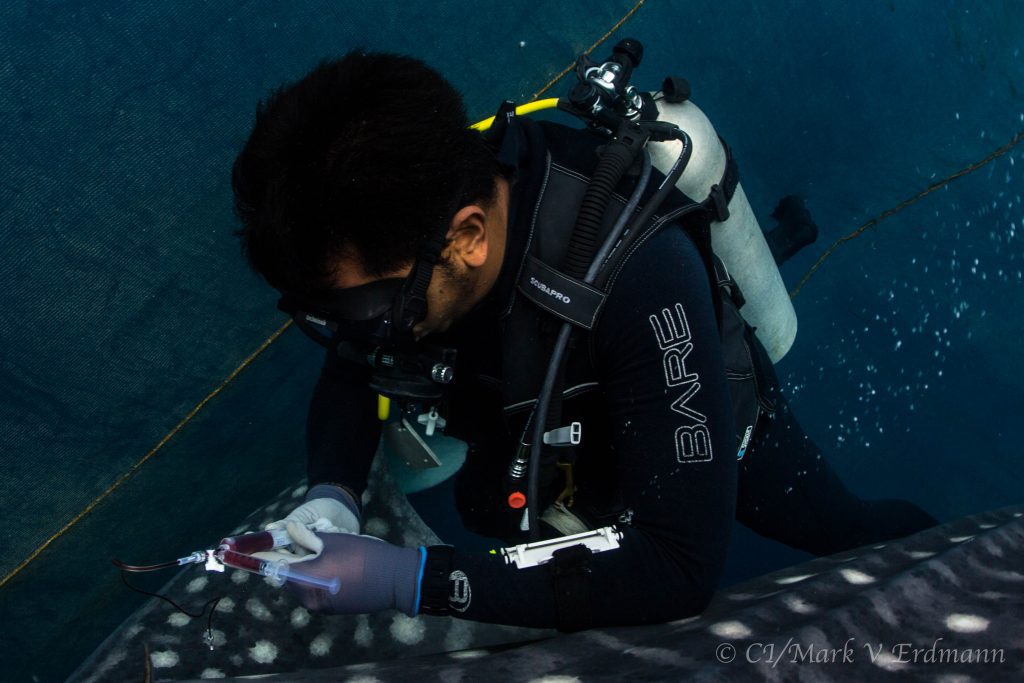 Drawing a blood sample from a captured whale shark.

Under Abam’s leadership, CI-I has expanded the geographical reach of the Elasmobranch program beyond Raja Ampat, to Kaimana, Cenderawasih Bay and most recently, Sumbawa. When not in the field, talking with local communities, government officials and tagging sharks and mantas, you can find him at home in Jakarta with his wife and young son playing with Buzz Lightyear or cooking a mean southern-style fried chicken! 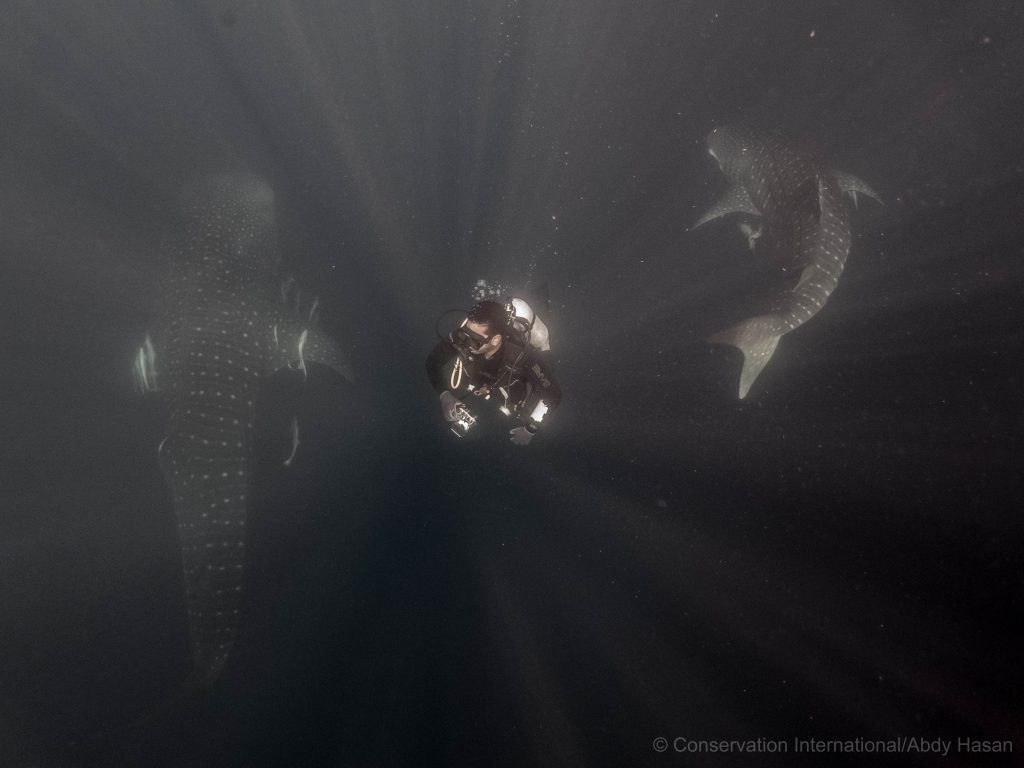 Although constantly learning through his evolving roles within the Elasmobranch program, Abam is entertaining the possibility of graduate school to further study whale shark behavior and technologies that allow insights into the mysterious world underwater. Abam hopes to continue helping the Indonesian government and local communities understand the importance and magnificence of local megafauna for long term conservation of marine ecosystems. 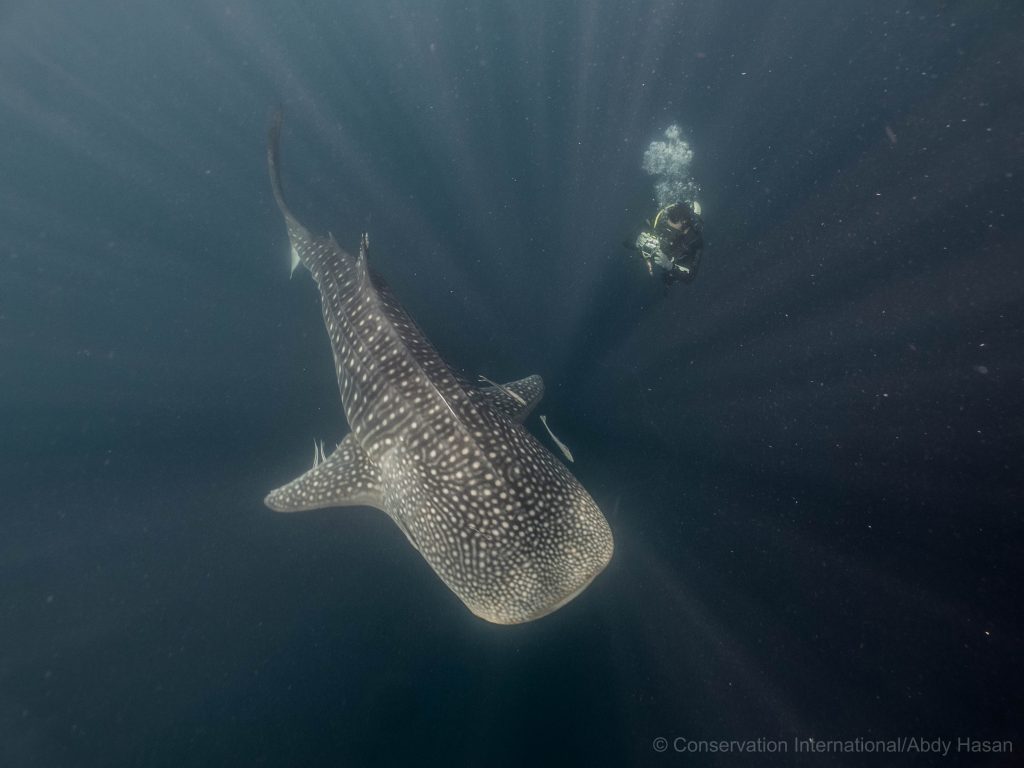 “After spending much time in the remote areas of Indonesia that are seemingly untouched by development, I couldn’t help but think that I’m living a very privileged Indonesian life. I now feel responsible to share all of my knowledge and dedicate my work to support conservation and improve the livelihoods of the communities that our program is working with. I feel strongly that I owe this to every young kid in Papua that has very little access and resources for proper education.”

Watch a video of Abam at work in Triton Bay.