From our last update in mid-June, 2020, the Raja Ampat’s Marine Park Authority keeps conducting regular patrols; one of few responsibilities that can still be implemented during the Covid-19 pandemic by the MPA’s management unit.

Despite news regarding the Covid-19 pandemic from other places in West Papua, and Indonesia in general, the area did not show any worrying signs but, in the context of Raja Ampat, risk needs to be taken to prevent violations within the MPA; with measured steps of prevention, of course.

The Marine Park Rangers have been implementing health protocol due to the Covid-19 pandemic to minimize risk during each patrols, and here are some of the highlights we’ve received up until the end of June from each of the MPAs chronologically:

a. On the 15th of June, 2020, rangers from Misool Islands MPA conducted a patrol with a route from Harapan Jaya Village – Samoket Cape – Yaal Island – Yellit Island – Olobi Island –     Segaf Island – Yellu Village, and encountered one fishermen from Yellu within the correct zone; resources use monitoring data was taken (RUM).

The only fishermen encountered by the rangers from Misool Island on the 15th of June, 2020. (Photo by: BLUD UPTD Pengelolaan KKP Kepulauan Raja Ampat, 2020)

b. The next day, 17th of June 2020, rangers from Misool Islands MPA conducted another patrol following up a particular report from members of the community.

Besides four local fishermen, they encountered one bigger fishing boat – commonly called bagan, which is not allowed to operate within the MPAs in Raja Ampat. The patrol team came on board, interviewed the crew, and managed to drive them away. 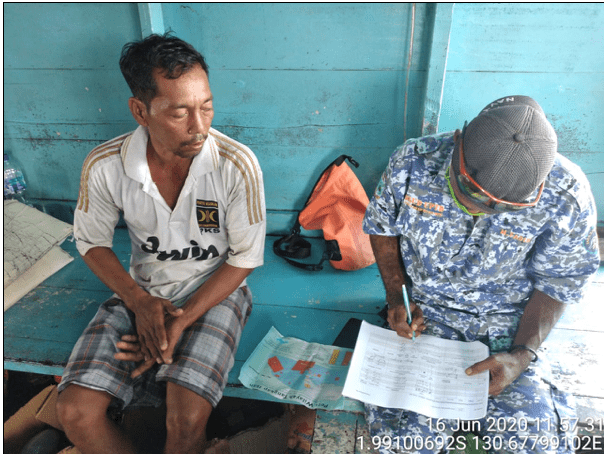 Jaga Laut – the official name for the Marine Park Rangers – from Mayalibit Bay went for patrol on the 17th of June. They did not find any resources use activity that day. However, they encountered two manta rays within the Bay – GPS locations were taken. That particular encounter was a bit ‘unusual’ for Mayalibit Bay. 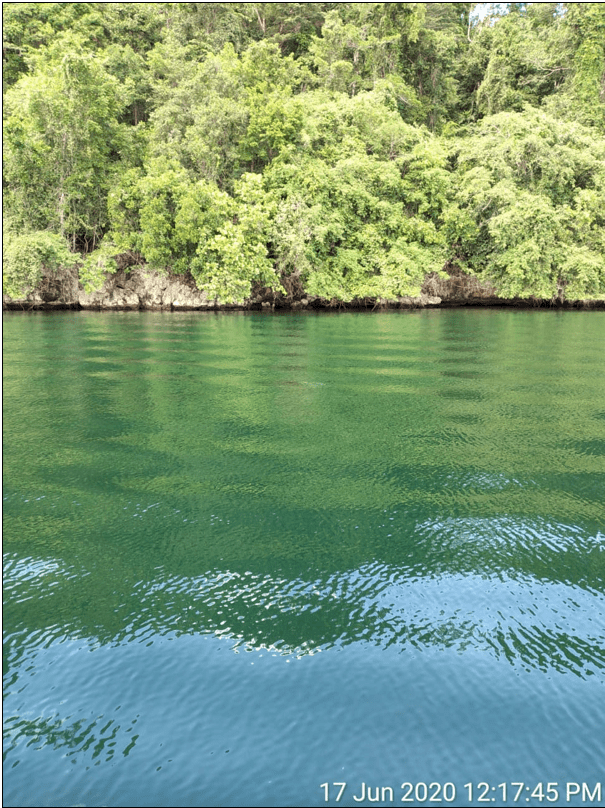 Reflection from one of the two manta rays encountered in Mayalibit Bay – though vaguely – can be seen in the photo. (Photo by: BLUD UPTD Pengelolaan KKP Kepulauan Raja Ampat, 2020)

Jaga Laut from Misool Islands MPA conducted another patrol on the 18th of June, 2020. The patrol covered a 67,4km distance, and encountered eight local fishermen from different villages in Misool, and another bagan within the MPA. Again, the Marine Park Rangers came on board, talked to the crews and directed them to sail out of the MPA. 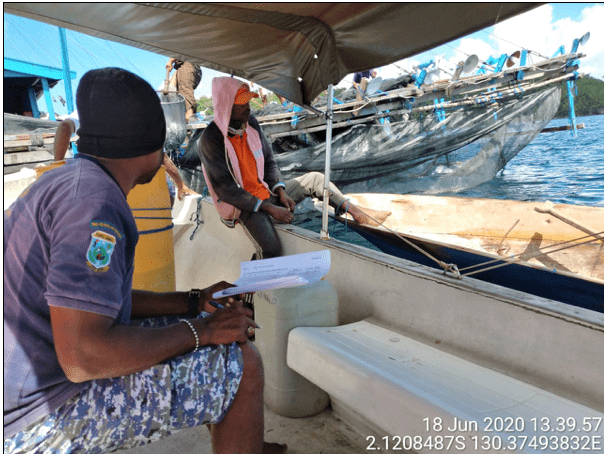 Jaga Laut moved closer to bagan, they managed to directed the bagan out of the MPA’s area. (Photo by: BLUD UPTD Pengelolaan KKP Kepulauan Raja Ampat, 2020)

Marine Park Rangers from Fam Islands MPA patrolled the area on the 19th of June, 2020. During the patrol that covered a distance of 165,7km, the rangers encountered one boat with 3 personnel fishing within the Food Security and Tourism Sub-zone. After explanation of the zoning system within the MPA, the rangers managed to direct the fishermen from Sorong out of the mentioned sub-zone.

One of the Marine Park Rangers from Fam Islands MPA checking the fishermen’s catches during the patrol conducted on the 19th of June, 2020. (Photo by: BLUD UPTD Pengelolaan KKP Kepulauan Raja Ampat, 2020)

a. Rangers from Asia and Ayau Islands MPA conducted a patrol on the 19th of June, 2020, and encountered two longboats from Wawarbomi Village, and 2 more fishermen from Yenkanfan Village. All were locals, and conducted activities within the correct zone; RUM data were taken.

b. A joint patrol that involved the local policemen and representatives from the district government was conducted on the 22nd of June, 2020, as a follow up to reports from members of the community regarding suspicious fishing activity within the MPA. However, the joint patrol only found two local fishermen conducting activities within the correct zone. 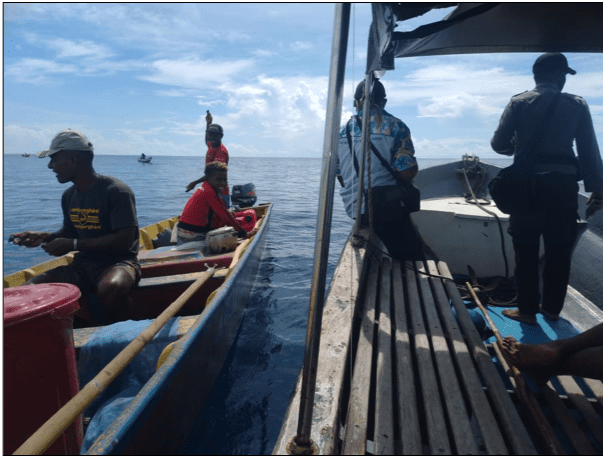 One of the two local fishermen encountered by a joint patrol conducted in Ayau and Asia Islands MPA on the 22nd of June, 2020. (Photo by: BLUD UPTD Pengelolaan KKP Kepulauan Raja Ampat, 2020)

This joint patrol was a follow up to reports from members of the community. The patrol managed to encountered four fishing boats with a total of 18 personnel carrying compressors and tanks. The joint patrol gave them explanation related to the rules within the MPA and directed them out of the MPA.

Furthermore, the joint patrol encountered nine fishing boats from outside Raja Ampat operating within the Core Zone. The joint patrol seized all activities and provide explanation related to the zoning system within the MPA, and drove them out of the mentioned zone.

One of the fishing boats encountered by the joint patrol in Wayag on the 21st of June, 2020; it was indeed a busy day for the joint patrol. (Photo by: BLUD UPTD Pengelolaan KKP Kepulauan Raja Ampat, 2020)

b. The rangers from Wayag Surveillance Post conducted another patrol on the 23rd of June, 2020. They only encountered one local fishermen from the nearby village; RUM data was taken.

Rangers from the Gam Surveillance Post – Dampier Strait MPA conducted a patrol on the 23rd of June 2016 with a route of Waisai – Mansuar Island – Gam Island – Urai Island. They encountered a fishing boat – bagan – nearby Urai Island. 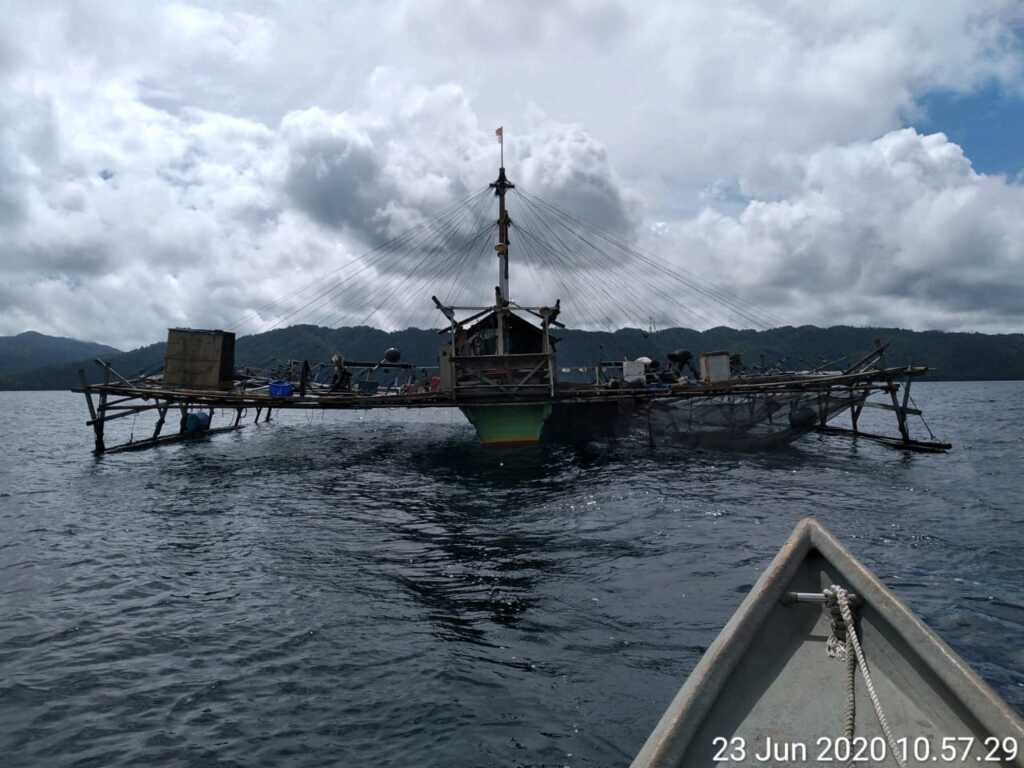 Marine Park Rangers from Mayalibit Bay patrolled the MPA on the 24th of June, 2020. They encountered 3 local fishing boats within the correct zone, and 2 more within the Sub-zone of Food Security and Tourism; which is not allowed for fishing.

One of the Jaga Laut then provided the mentioned local fishermen with information related to MPA and it’s zoning system, and afterwards ‘escorted’ them to the correct zone. 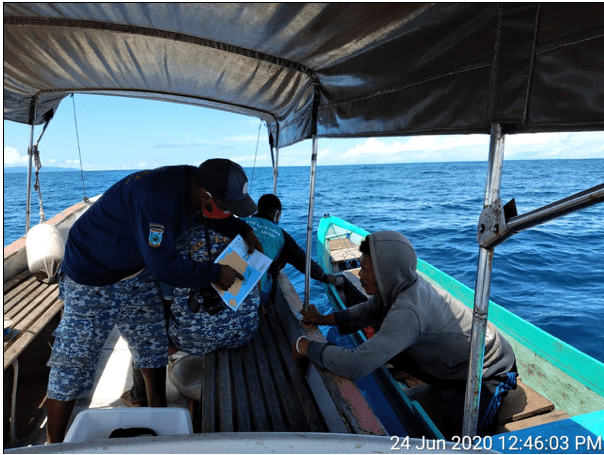 One of the Jaga Laut’s personnel provided an explanation to a local fishermen from Mayalibit Bay regarding the location-slash-zone permitted for fishing activity. (Photo by: BLUD UPTD Pengelolaan KKP Kepulauan Raja Ampat, 2020)

a. Marine Park Rangers from Kofiau – Boo Islands MPA conducted a patrol on the 25th of June, 2020. During this patrol they encountered three local fishermen within the correct zone; RUM data was taken.

b. Kofiau – Boo Islands was again patrolled on the 26th of June, 2020. During the patrol that day, the Jaga Laut encountered two local fishermen within the Sustainable Fisheries Zone; they were interviewed for resources use monitoring data. 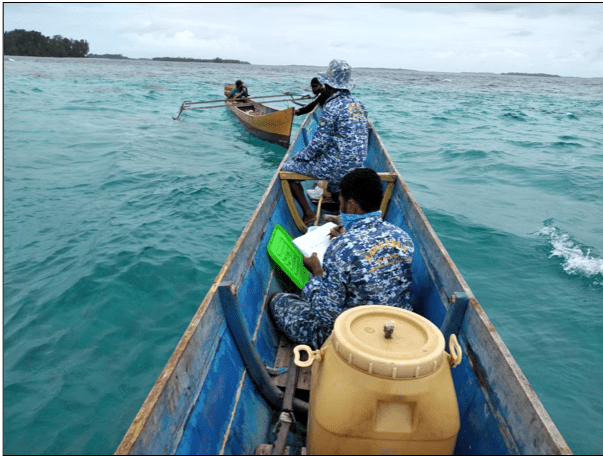 One of the fishermen encountered by the Jaga Laut from Kofiau – Boo Islands MPA on the 25th of June 2020. (Photo by: BLUD UPTD Pengelolaan KKP Kepulauan Raja Ampat, 2020)

To summarize the updates regarding patrol activities conducted by the Raja Ampat’s Marine Park Authority, below is the table on their patrol count based on each MPAs for May and June, 2020.

Lastly, we would like to say thank you for your kind attention and support. Stay healthy, everyone!