With the extension of travel restrictions due to the Covid-19’s pandemic in Indonesia, especially for Java and Bali (after seeing some slight increase earlier this year), tourism activities in Raja Ampat have once again declined – as you can see from the numbers of tourism-related utilization data from the past months.

Fisheries activities, however, only decreased significantly during April and May last year, and have now gradually increased; especially relating to fishermen coming  from outside Raja Ampat.

Rangers from Asia and Ayau Islands MPA conducted eight patrols this month, and did not find any violations. Resources Use Monitoring (RUM) data were recorded from all the MPA’s beneficiaries met.

Marine park rangers’ speedboat, ‘Insonem’, approaching a fishermen from Boiseran Village – one of the nearby villages – to be interviewed later for RUM data collection. The photo was taken during a patrol on the 26th of August. (Photo by: BLUD UPTD Pengelolaan KKP Kepulauan Raja Ampat/2021).

In August, Jaga Laut from Mayalibit Bay MPA conducted a total of five patrols and did not find any violations within the bay or beyond. RUM data were collected from all the MPA’s beneficiaries encountered this month. 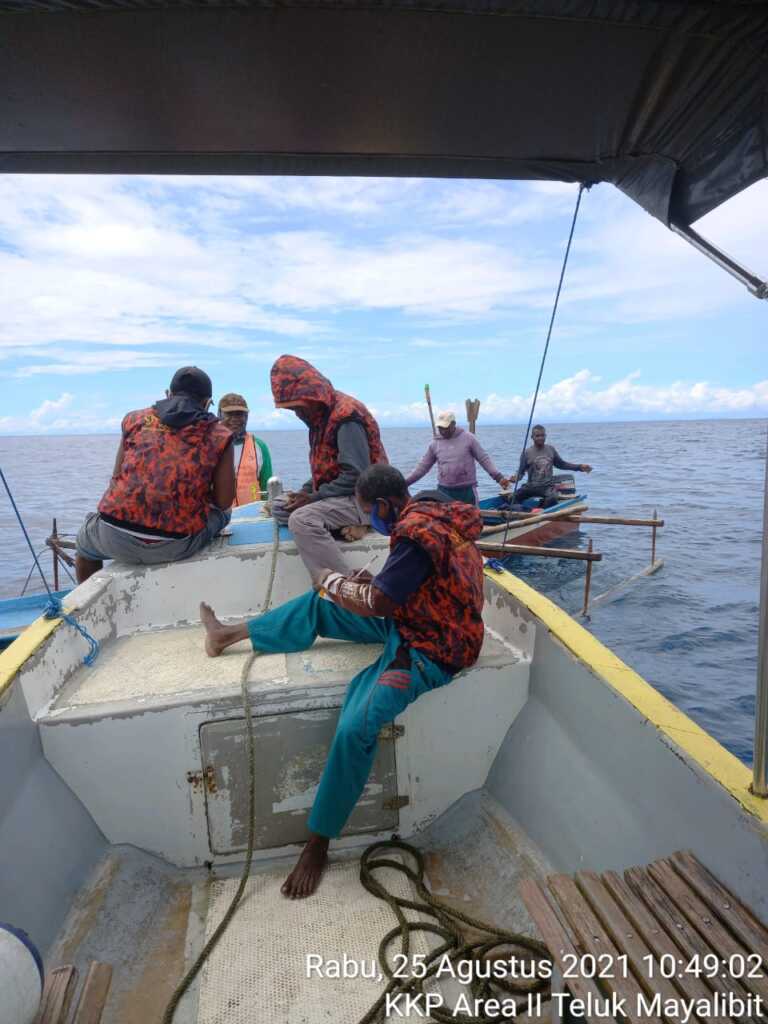 Rangers from Mayalibit Bay MPA shared tasks during RUM data collection from one of the fishermen encountered that day: one personnel asked questions, while the other taking notes. (Photo by: BLUD UPTD Pengelolaan KKP Kepulauan Raja Ampat/2021).

A total of ten patrols were conducted out of the two monitoring posts in the Dampier Strait MPA, Gam and Yenaduak. Gam encountered one violation, while Yenaduak did not find any. Jaga Laut from Gam Monitoring Post were also involved in an evacuation process of a dead whale on the 26th of August, 2021.

The violation was encountered during a patrol on the 21st of August, 2021, when a fishermen’s boat caught fishing in a dive spot called Chicken Reef, which is located in Tourism and Food Security Sub-zone. Rangers then provided them him with information regarding zoning system in the MPA, before directing him to sail away from the mentioned sub-zone. 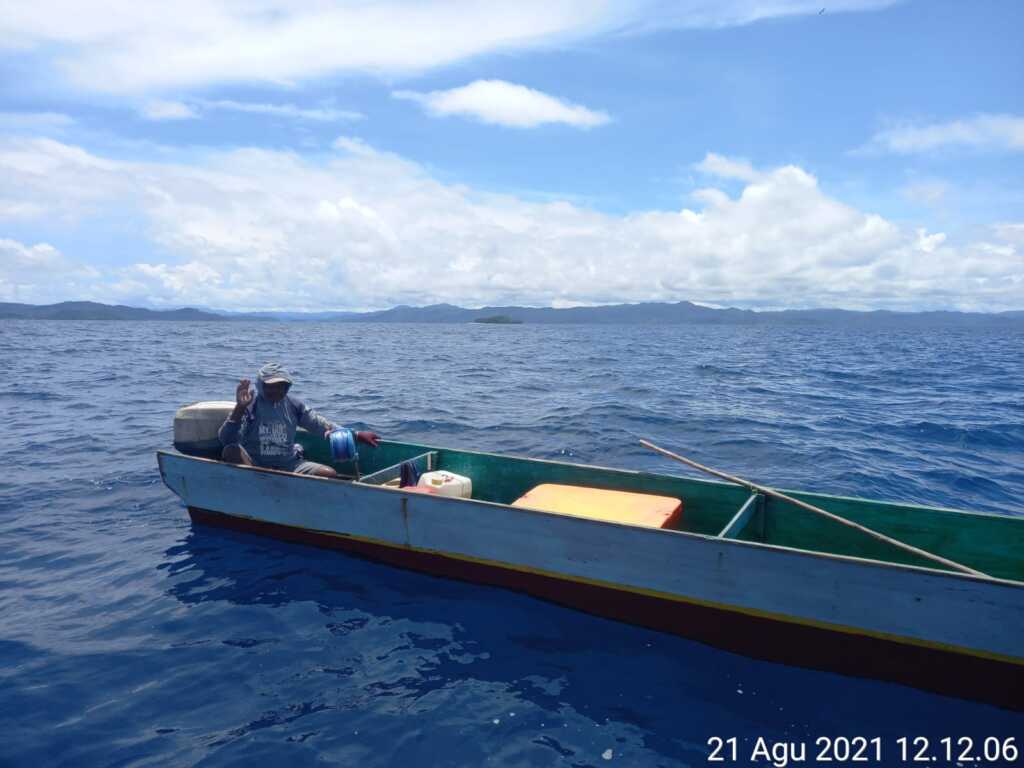 Fisherman caught fishing in a no take zone area by the rangers from Dampier Strait MPA’s Gam Monitoring Post. He was directed to sail away from the sub-zone. (Photo by: BLUD UPTD Pengelolaan KKP Kepulauan Raja Ampat/2021).

Based on an information received on the 25th of August, 2021, rangers from Gam Monitoring Post set out to search for the carcass of a whale reported floating nearby a homestay. During the search that day, additional information was received stating that the said whale had floated to nearby Arborek Village due to the strong current.

The following day, rangers with representatives from two offices of Ministry of Marine and Fisheries located in Raja Ampat, and two locals from Sawinggrai Village, headed to the whale carcass’s location, where they set up a sort of tow to carry it elsewhere.

The evacuation team decided to transport the carcass to a nearby mangrove area in a location called Warbeki. This move was made so that the natural decomposition process can commence smoothly. The dead whale itself, measured up to 12 meters in length, and up to 3 meters in width. 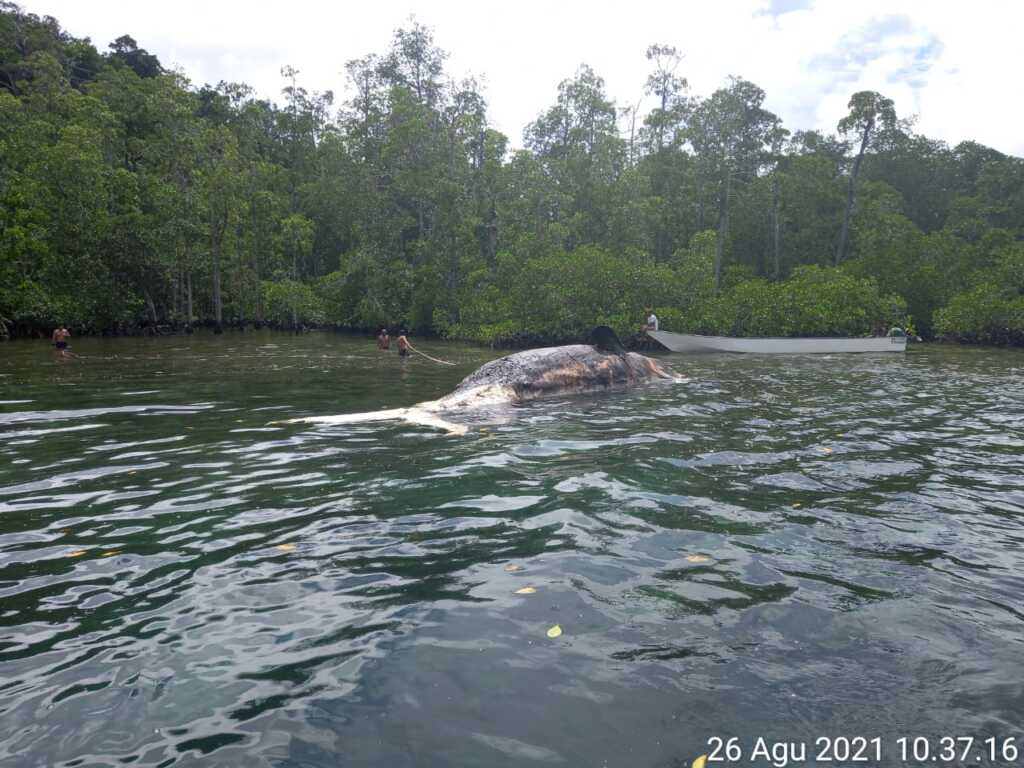 Evacuation process of a dead whale under the guidance and supervision of Raja Ampat Task Force of the Ministry of Marine and Fisheries. The carcass was tied to nearby mangroves in Warbeki. (Photo by: BLUD UPTD Pengelolaan KKP Kepulauan Raja Ampat/2021).

In August, rangers from Misool Islands MPA conducted a total of seven patrols, and encountered two violations in the 03rd and 04th of the month respectively. The first violation encountered was related to illegal fishing gear, a type of long line, prohibited to be used within MPAs in Raja Ampat – and for which he was directed to sail away from the MPA, subsequent to RUM data collection.

While the violation on 04th of August was when a fishermen from nearby village was found fishing within the Tourism and Food Security Sub-zone. Jaga Laut provided the explanation related to borders of the no take zone in Misool Islands MPA, collected data for RUM, before directing him to move on from the mentioned sub-zone. 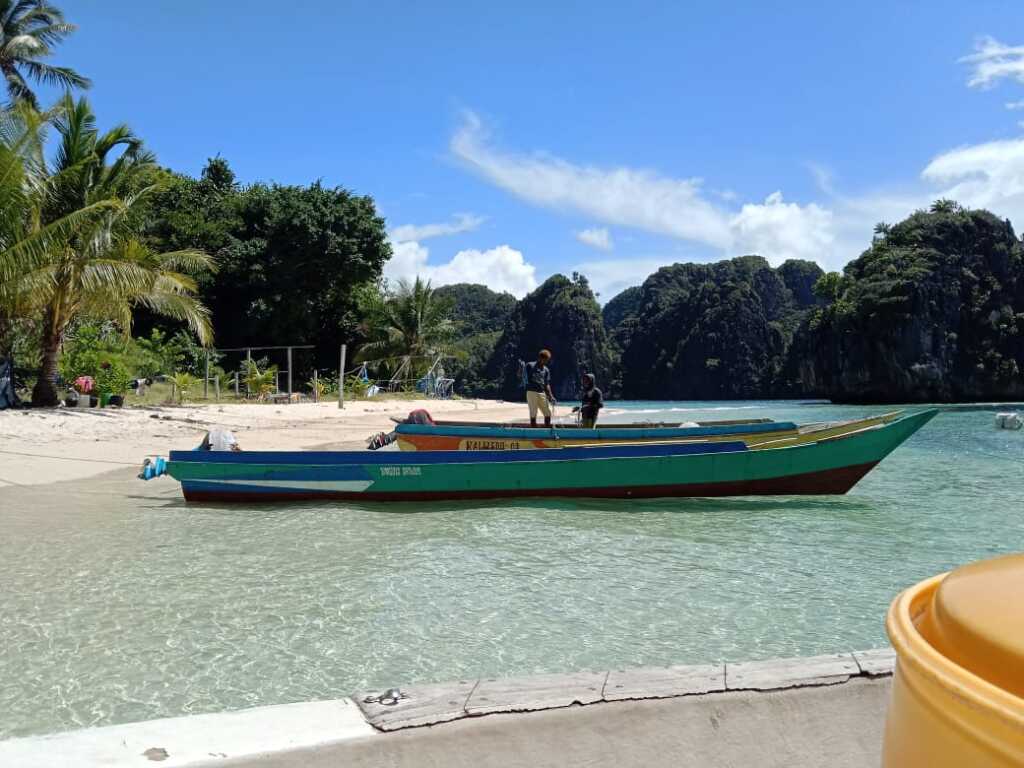 One out of four fishing boats encountered during a patrol on the 03rd of August, 2021. This particular fishing boat was caught using prohibited fishing gear; a type of long line called ‘rawai’ in Bahasa Indonesia. (Photo by: BLUD UPTD Pengelolaan KKP Kepulauan Raja Ampat/2021).

Kofiau-Boo Islands MPA’s rangers patrolled the area nine times in August, and encountered one violation on the 31st of August, 2021. The violation was when rangers caught a fishing boat without proper licenses. This violation falls under the category of Illegal, Unreported, Unregulated (IUU) Fishing.

After a thorough check on board the fishing boat, rangers then provided information regarding Raja Ampat’s MPAs Network in general, and emphasized that fishing boats without proper licenses are not allowed within the MPAs, before directing him to sail away from the area. 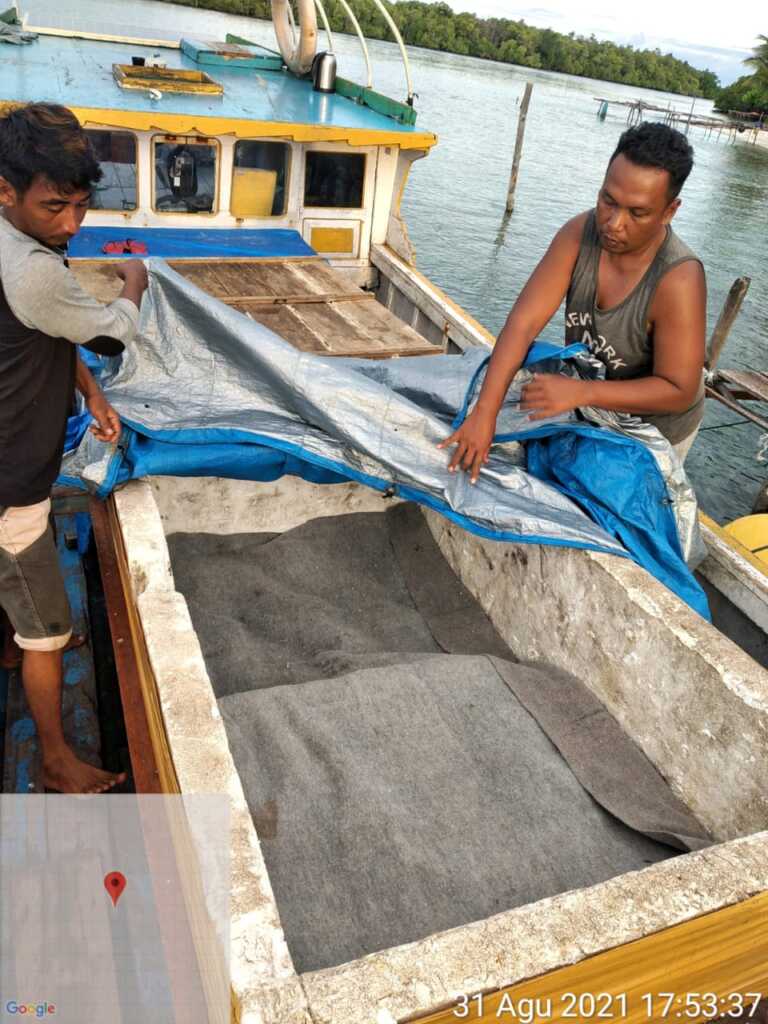 Fishing boat caught without proper licenses by Jaga Laut from Kofiau-Boo Islands MPA. According to information received by our rangers, the vessel originated from one of the nearby villages within the MPA. (Photo by: BLUD UPTD Pengelolaan KKP Kepulauan Raja Ampat/2021).

Rangers from Fam Islands MPA conducted eight patrols in August, 2021, and did not find any violations during those patrols. However, on the 28th of August, during a patrol which took the route of Yar Island and Mangginan Island, Jaga Laut found two finless sharks in the shallow water eastward of Inus Island.

The sad discovery emphasized the fact that shark finning still occurs in Raja Ampat. After the patrol, Fam Island’s rangers asked people in the villages for information that might shed some lights regarding this discovery. 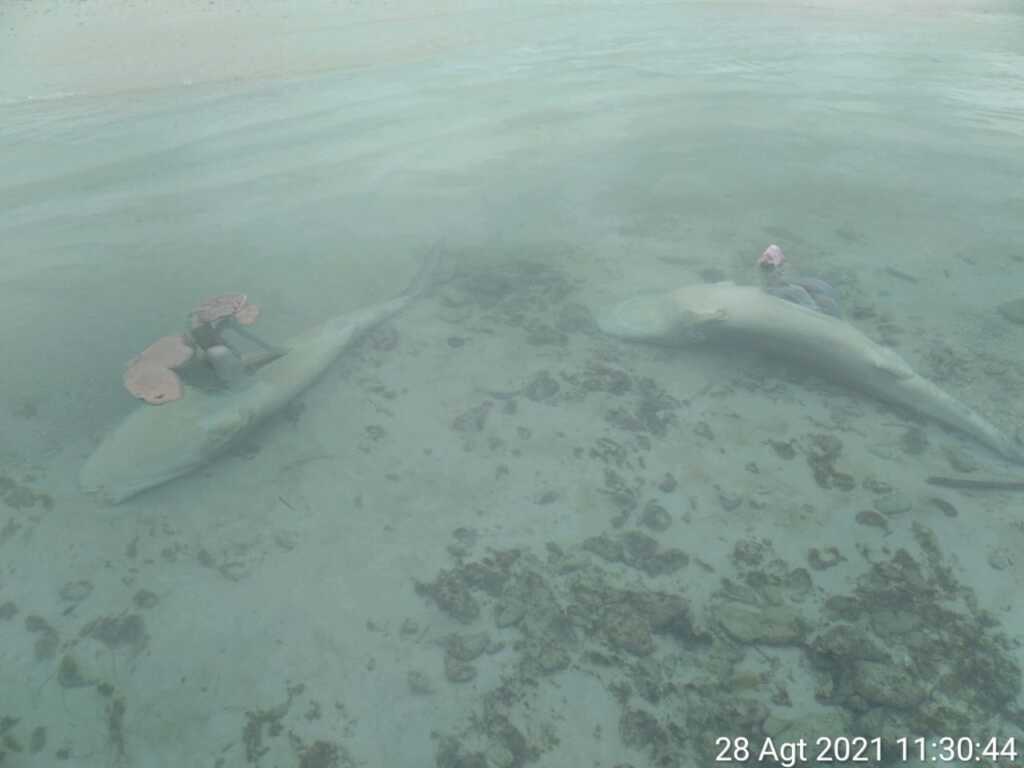 Rangers from Wayag Monitoring Post in West Waigeo Islands Marine Reserve patrolled the area eight times this month, and did not find any violation during those patrols.

However, one violation was encountered when rangers were on duty in the monitoring post on the 22nd of August. Around 30 visitors were caught without entrance fee, and during the period of restriction of tourism activities due to the pandemic.

Rangers took documentation of the mentioned activity, then provided explanations related to the restriction and the obligation for entrance fee, before politely asked them to leave after they finish their lunch. 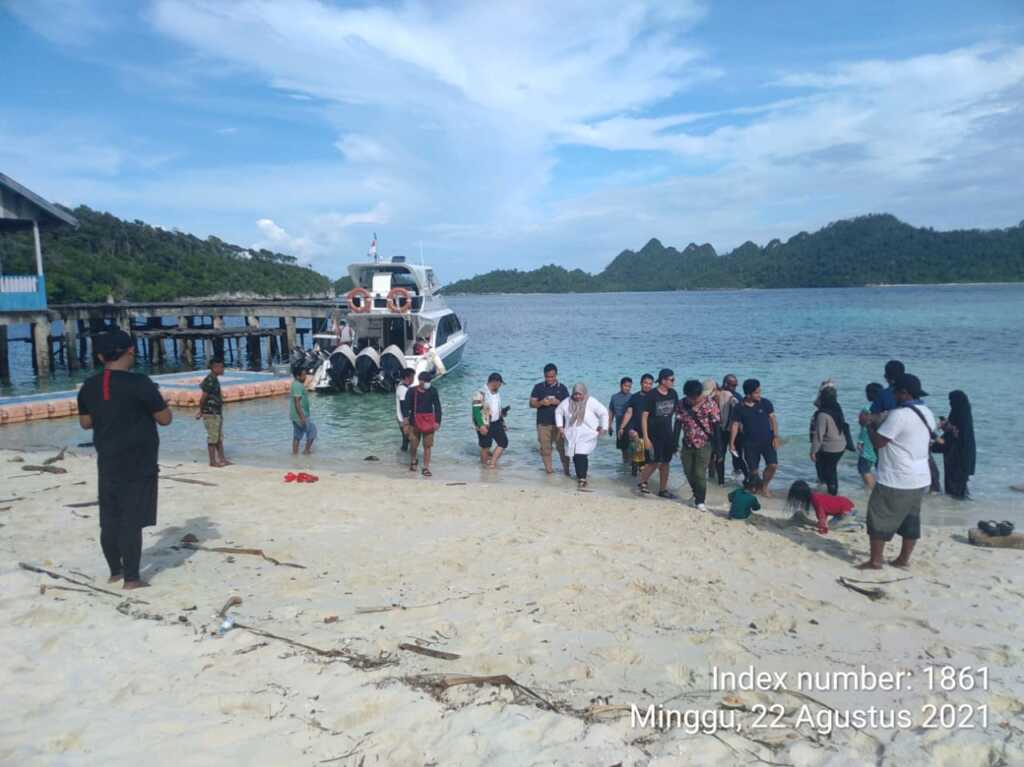 One violation was encountered during a shift in the Wayag Monitoring Post. These visitors does not have entrance fee’s cards, and they also broke the pandemic’s restriction imposed by the local government. (Photo by: BLUD UPTD Pengelolaan KKP Kepulauan Raja Ampat/2021).

For your information, West Waigeo Islands Marine Reserve is formally under the direct authority of the central government’s Ministry of Marine and Fisheries, while Raja Ampat Marine Park Authority provided technical assistances, such as patrol activity and all the related aspects, for this particular MPA.

The Marine Park Authority itself works under the West Papua Province Government’s Marine and Fisheries Agency, and has authority over the other six MPAs in Raja Ampat (For more information on Raja Ampat’s MPAs Network, kindly visit www.kkprajaampat.com for Bahasa Indonesia, or www.rajaampatmarinepark.com). 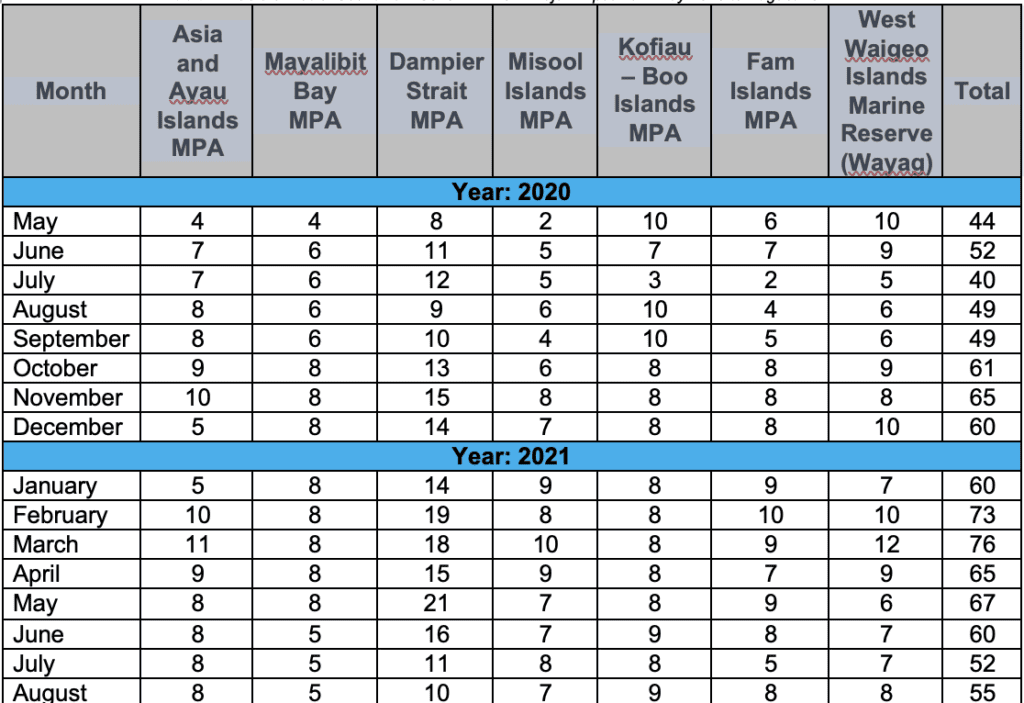 Table of Patrol Count from Seven MPAs in Raja Ampat from May 2020 to August 2021.

Those were the update from seven MPAs patrolled by Raja Ampat Marine Park Authority for August, 2021. Hope you enjoyed it.

On behalf of all the staff in Raja Ampat Marine Park’s Authority, we wish you all happiness and fine health! See you in our next update.

Thank you very much for your time, attention, and kind support – as always.