The winners of the 2017 DEEP Indonesia Photo Contest were recently announced and Damien Mauric‘s image from Raja Ampat took GOLD in the Reefscape category.  Damien kindly shares with us that image, plus a few others, along with a bit of background on his life journey plus the story behind his award winning image.

Additionally Damien’s work is featured in the newest BHS Gallery (see those images by clicking here, Damien’s Gallery).
I think you will agree Damien is passionate about diving and photography.  We would like to thank him and invite you to marvel at his stunning image making. 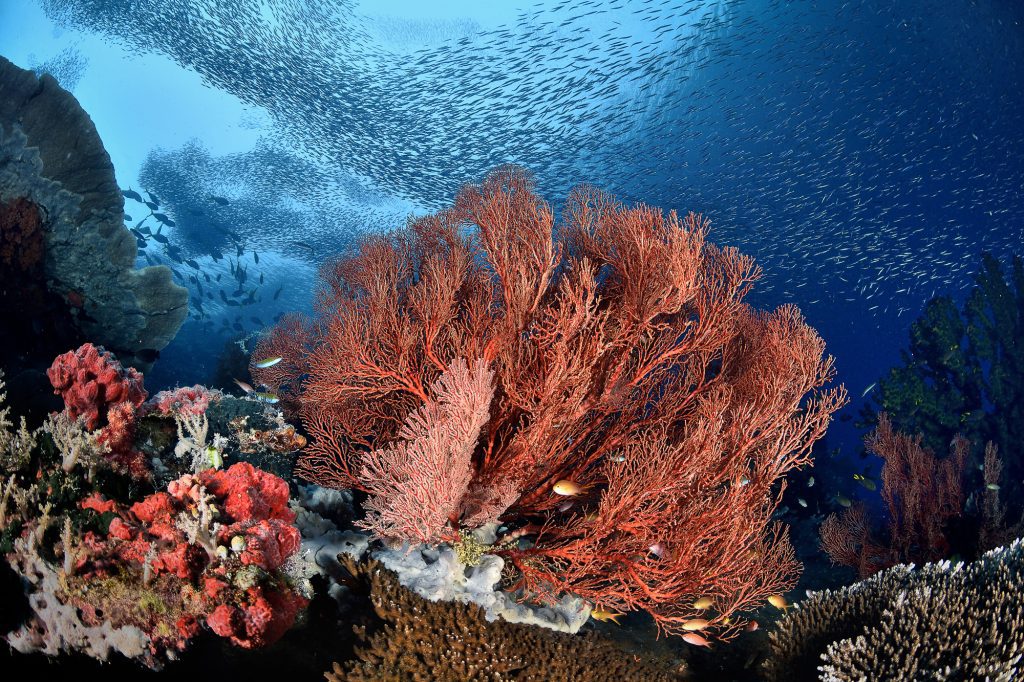 The Story Behind the Image: I like to create images showing marine life in motion and Raja Ampat is probably the best place on earth for creating this type of photograph. Every reef, every wall, every piece of rock is carpeted by abundant marine life. At the same time there is always something happening in the blue. While I was exploring one of the underwater garden of Pulau Wayilbatan (Southern Misool), I noticed this large and beautiful fiery-red gorgonian. Coming out of nowhere a huge school silversides started a beautiful choreography in front of my camera. What a perfect moment for the passionate diver that I am to witness this dance orchestrated by larger pelagic fishes hunting in the background. I couldn’t miss the opportunity to capture the elegance of this underwater ballet. 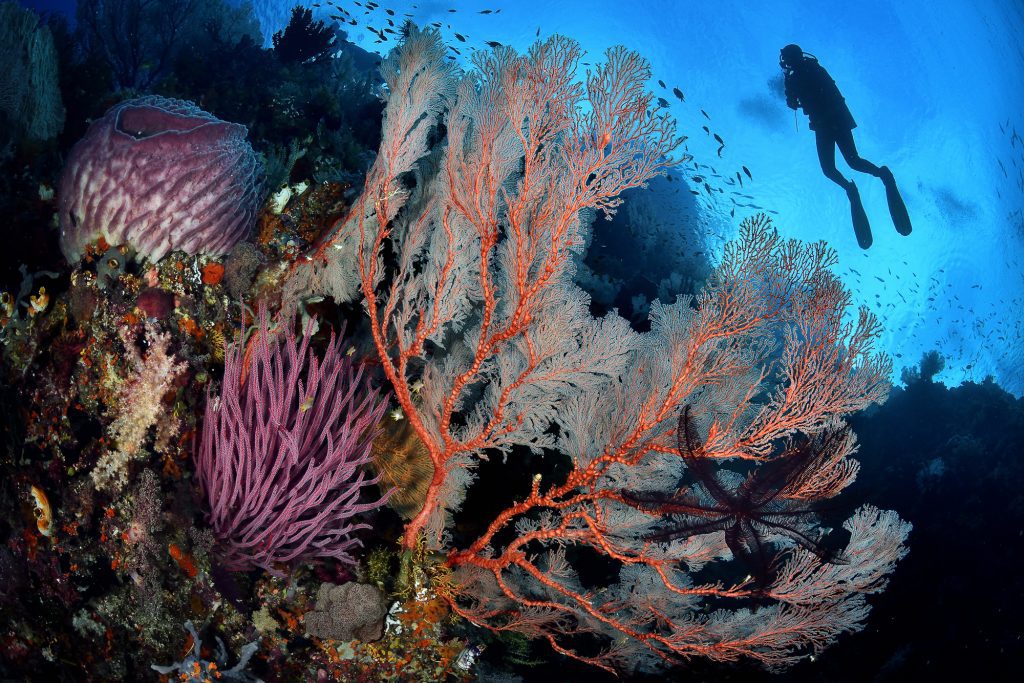 Damien Mauric fell in love with the sea at a very young age and is addicted to getting lost in the blue hues of the deep with its incredible density and gradient of colours. His passion for the sea could be called a family legacy. Damien was born in the South of France into a family with tight links to the ocean. His grandfather was a naval architect who cooperated with Jaqcues-Yves Cousteau and designed Cousteau’s boat, The Alcyone. Damien’s godfather was a diver and underwater geologist.

He grew up on the shores of the Mediterranean with his fins, mask and snorkel in hand. His passion for breathing underwater came quite late, in his early 20s, when he became a certified diving instructor and gave lessons at a diving school in Spain. It was then too, that he became interested in underwater photography. 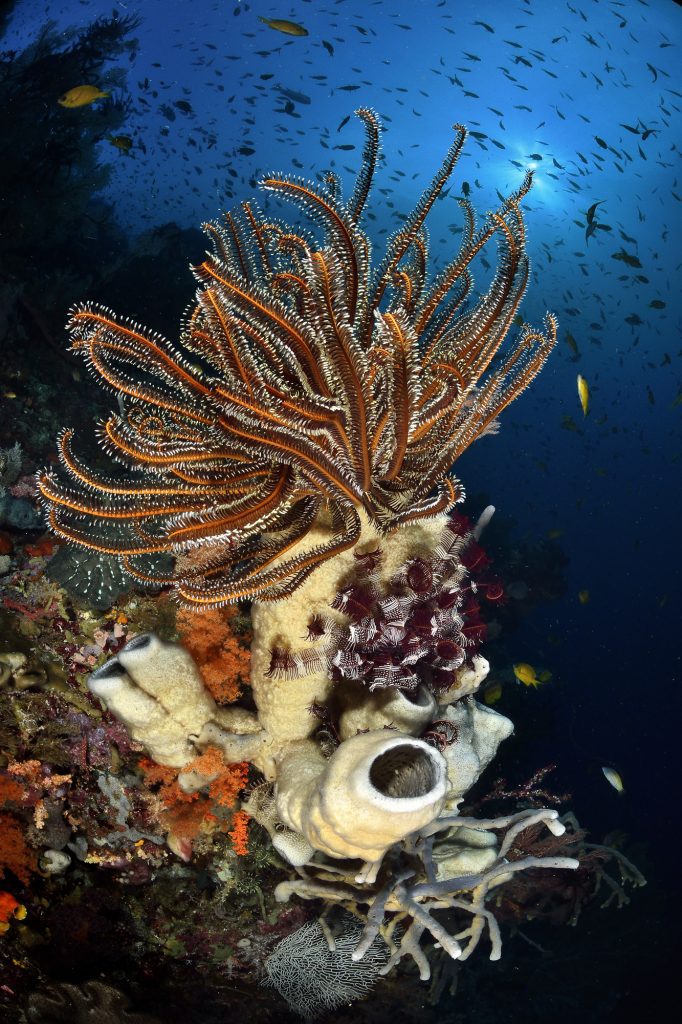 For the past 15 years, Damien has been diving and shooting in most of the world’s seas and oceans including the Red Sea, the Indian Ocean, Atlantic Ocean, Caribbean Sea, North and South Pacific Ocean and the Mediterranean.

Despite all his travels, one of his favorite places to dive is the Mediterranean Sea. The blue hues are so unique and cannot be found any other place in the world and the giant red gorgonians on deep walls are another unique Mediterranean feature.

Damien prefers to shoot wide angle to showcase the richness of the oceans. He especially enjoys shooting large schools of animals while anticipating and reading their behaviour. 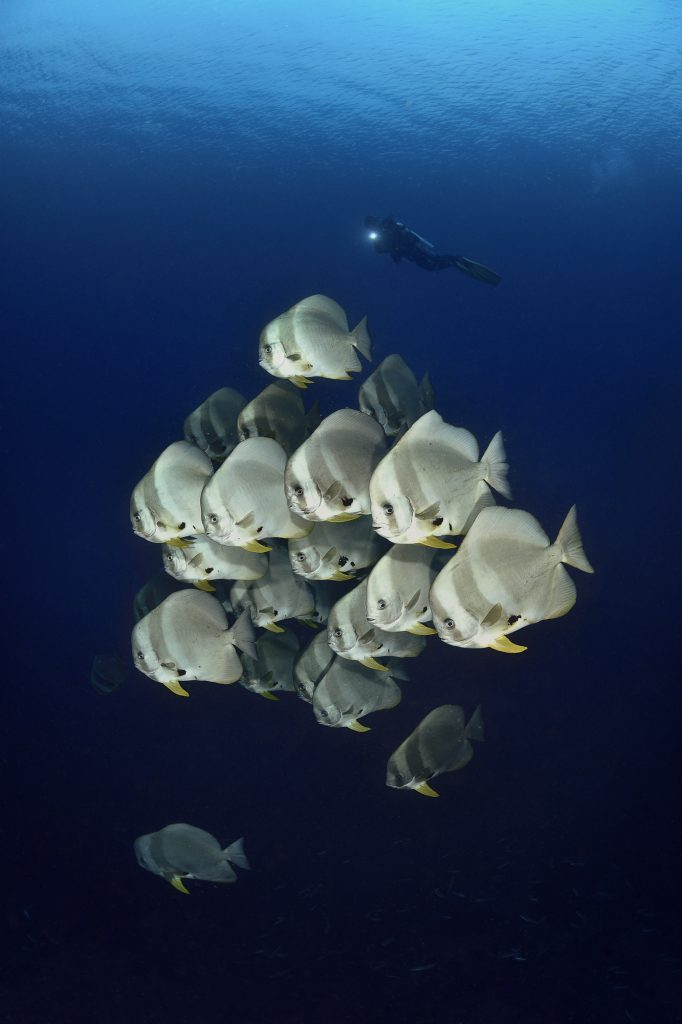 As a diver and underwater photographer he’s witness to the damages done to the world’s oceans by human activities because of a lack of interest in environmental concerns which have largely depleted fish populations and brought many species to the brink of extinction. With Brian Skerry, David Doubilet and Alex Mustard as his inspiration, Damien hopes that by sharing his images he can help raise consciousness for protecting the oceans. His mottos is simple but important, “Protect the Oceans”.

Damien would especially like to thank the live aboard Dewi Nusantara and its crew for their assistance while creating his images. 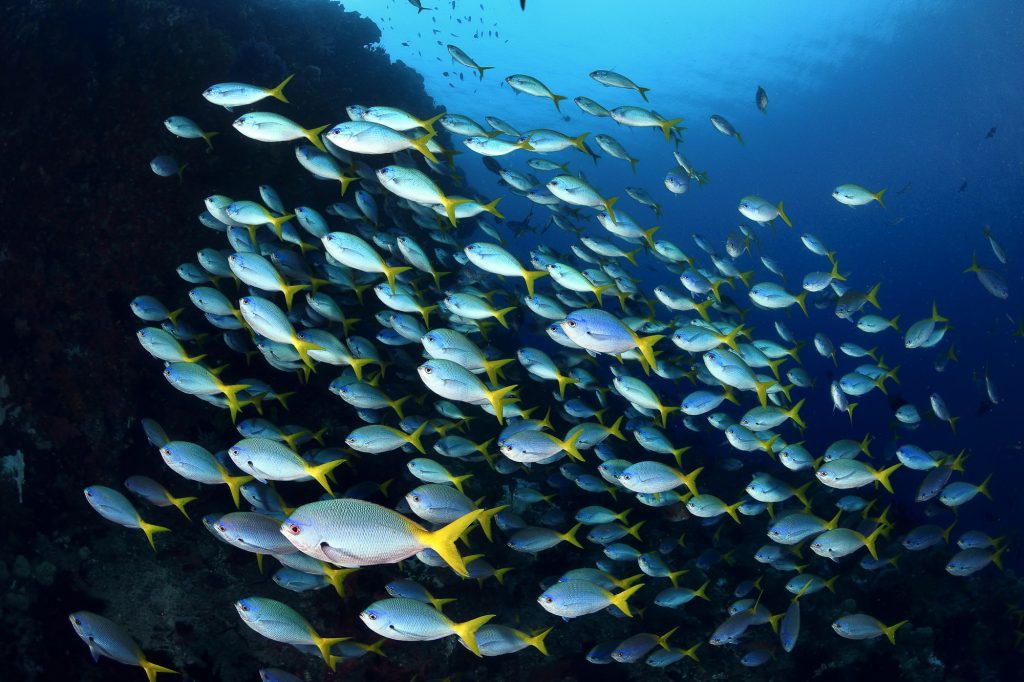 To view more of Damien’s images check out his Facebook and Instagram pages.  And don’t forget to view Damien’s Gallery!