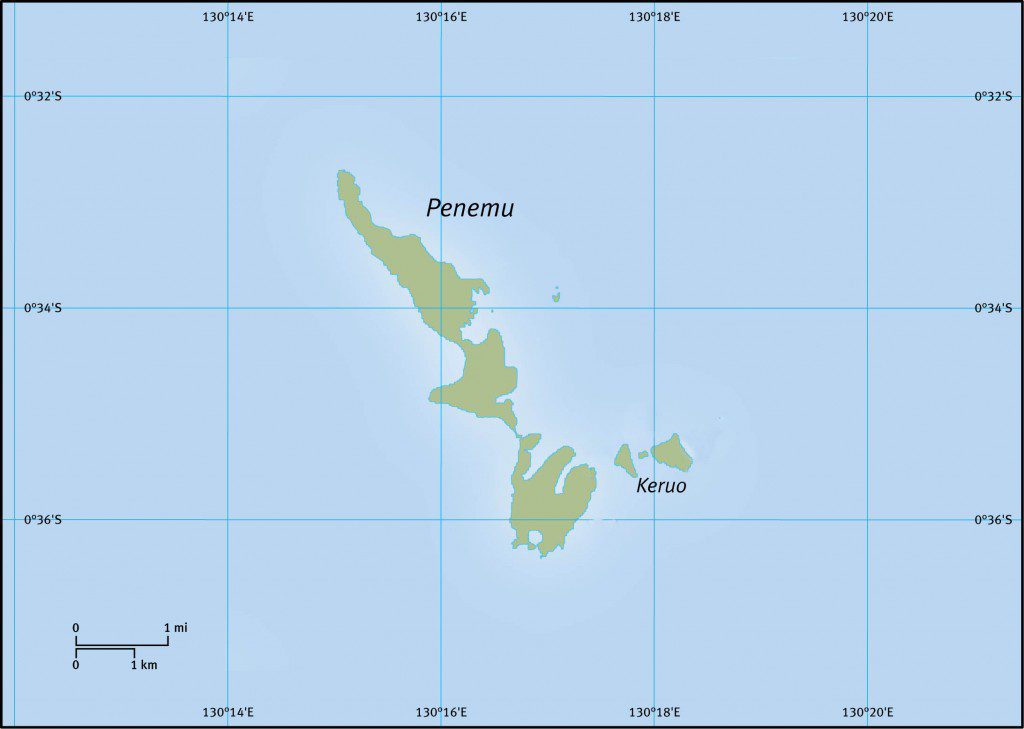 Penemu is the collective name of an island group some 10 nautical miles to the west of Gam and around 5 nautical miles north of the Yeffam Island group in northern Raja Ampat. Penemu is by far the largest and highest island in the group, at 200 meters plus, which includes Keruo as well many satellite islets and rocky, surface-breaking seamounts. This pretty and very scenic area is very popular with visiting dive liveaboards and yachts, and includes some great dive sites. Penemu is also popular because of its many other activity options both in the water and on land.  Sea Sanctuaries Trust has their Raja Ampat base here and they have also built a lookout post at the top of the small island directly east of the Penemu lagoon area. 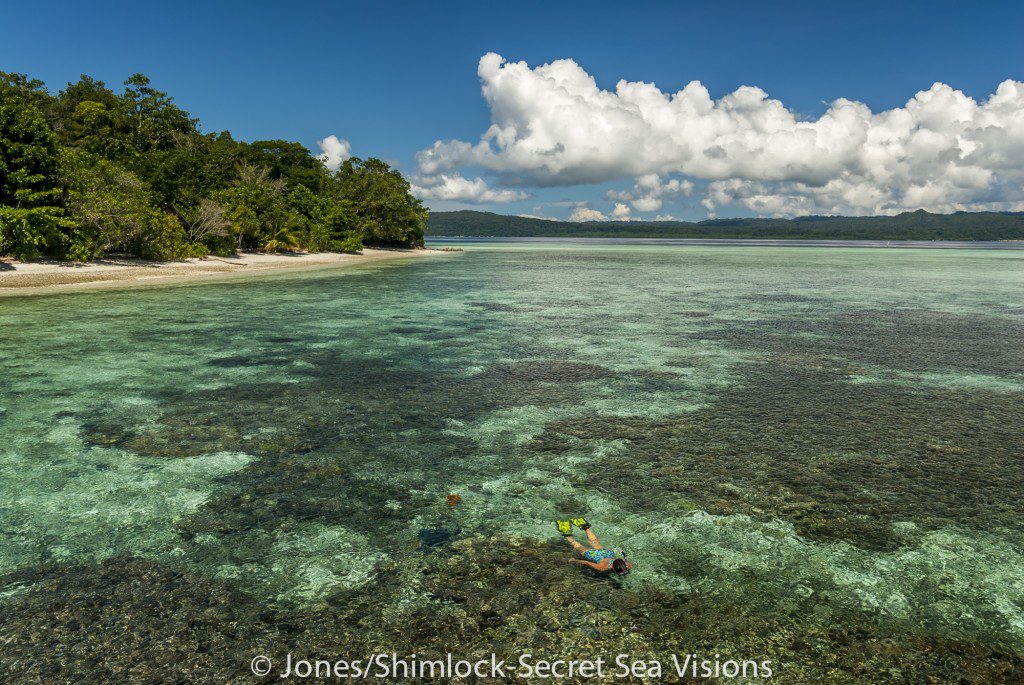 There are many great snorkeling sites with access to the beaches and small coves around the colourful reefs that line the island group. One site that does not have a beach and is a little further out to the east is called Batu Burung (Meslissas’s Garden). The diving at this collection of rocks and reef is described in more detail elsewhere on the Birdshead website but it does feature the chance to snorkel quite possibly the finest shallow water coral garden in all of Raja Ampat.

While Batu Burung does suffer from some fairly strong currents at certain moon and tide phases but if you get your timing right the site affords a fabulous kaleidoscopic insight into the vibrant reefs and marine life of the park.

For more adventurous swimmers an exciting drift snorkel is possible up or down the Keruo Channel, depending on current direction. Once again, the corals and marine life here are outstanding. 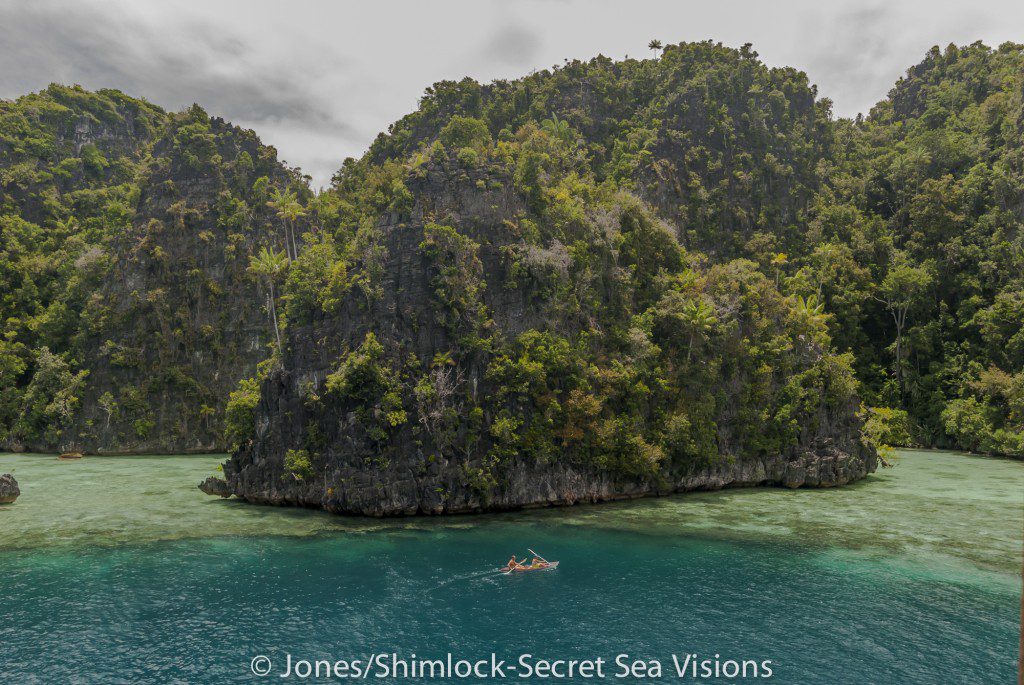 Kayaking and tender ride opportunities around the island group are some of the best in Raja Ampat. On the eastern side of Penemu island is the entrance to an inner bay that allows access to another of the park’s hidden lagoons. The reefs just inside the entrance are very shallow and a white marker buoy has been placed here, just make sure you keep to the left of this to avoid any contact with the corals.

Dotted with limestone rocks these breathtaking narrow waterways wind a short way into the interior and are host to an array of marine and terrestrial flora and fauna. Juvenile pelagic fish can be spotted in the channels; we even spotted a rare pomano playing around on the surface recently. Tropical birds glide overhead from tree to rock to tree and keep an eye for the spectacular screeching red parrots high up on the ledges of the large rocks and cliff faces.

On the far side of the lagoon is what appears to be a relatively new homestay or accommodation building which I believe has been constructed with travelling kayakers and other adventure tourists in mind., this has easy access to one of the beaches on the west side of the island.

An even more recent development is a nicely constructed stairway around 300 metres away but visible from the entrance to the lagoon. A new landing stage has been built and some sturdily constructed stairs, some 203 of them, have been built onto the island all the way up to the peak of this particular karst limestone rock. Once at the top trekkers are rewarded with a spectacular view out across the waterways from two observations points, a nice addition to the lagoon system.

More exciting places to take a kayak or boat that also have good snorkeling are two inlets into south east Penemu. The southern one of these features high limestone cliffs and appears as if it has been cut into the island by some huge machine as its angles are so precise. The walls of this cut are good for snorkeling and close to the far end the reef rises sharply up and over to an almost circular swimming pool. This pool is around 3 metres deep with a white sandy bottom and perfect for teaching scuba lessons in, which I have actually done on one occasion, although we did have a little trouble getting out when the tide went out!!! 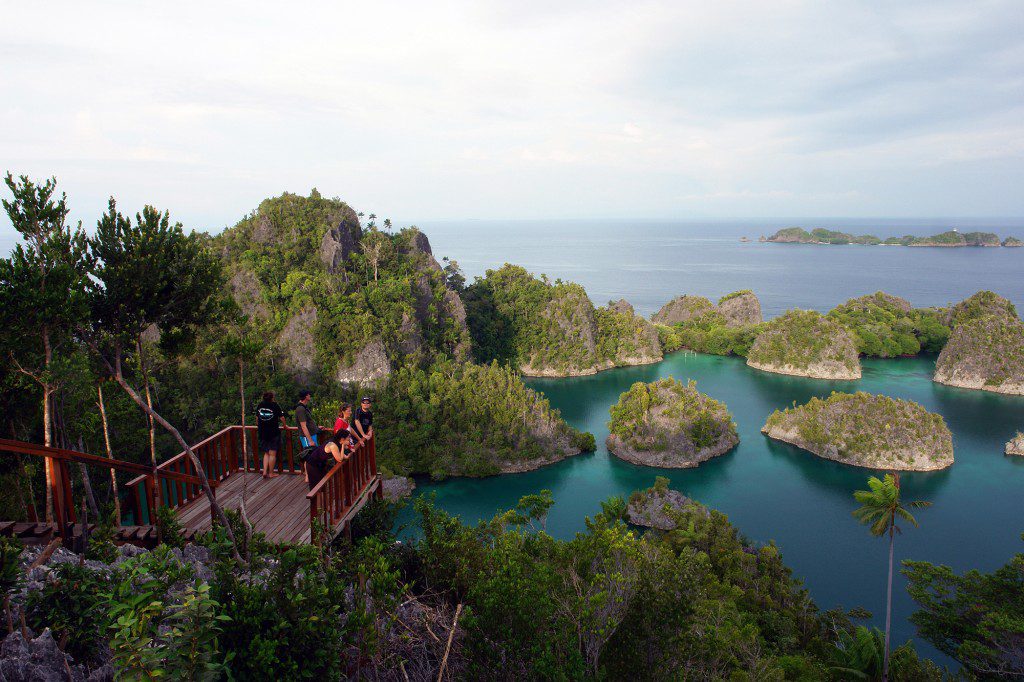 Although there are probably many others there is one popular, and not particularly strenuous, land trek called Mount Penemu and this begins fairly close to the new tourist accommodations mention above. Pulling a speedboat up to a small rocky entrance on shore, just around the corner from the lodge, it is possible to hop off into the bushes and small trees and hike up onto one of the higher hills of Penemu. The GPS for the landing site is S.00.33.948  E.130.16.197.

The trail winds up out of the undergrowth onto a treeless grassy savannah slope before leading even higher to a tree covered ridge at the top. There are no trails up here but the forest is easily negotiated. I have been up here on one occasion but unfortunately I have not had the time to fully explore the area. I do believe however that the views from the very top of the ridge out over the surrounding islands would be stunning.

All in all, Penemu is a fantastic place to spend a day during a Raja Ampat cruise, it has sensational dive sites, calm anchorages and spectacular land and surface opportunities.

Garry Bevan is a long time resident of Bali. He has been involved for 20 years in various under and over water capacities, including cruise director with the Peter Hughes Diving/Dancer fleet on the Komodo and Paradise Dancer vessels as well as many other liveaboards and private yachts.
On shore he produces media articles, presentations, movies and is a frequent contributor to this website. He is presently in the middle of a 12 year “battle” to produce dive site guides for Komodo and Alor.  He can occasionally be found in Sanur,Bali fiddling around with dive compressors and playing loud bass guitar with his band, “The Thuds”.