Hello everyone, we’re back with October’s update of Raja Ampat’s community-based patrol activity. This month, most of the MPAs under the Raja Ampat’s Marine Park Authority*** were be able to meet the minimum quota of 8 patrols per month; some exceeded that number.

In this month’s update, similar to August and September, we would like to inform you with the numbers of patrol while highlighting some of the violations within the MPAs encountered by Jaga Laut – the official name for Raja Ampat Marine Park’s rangers – during their patrols in October 2020.

Here are the highlights from the patrol conducted in Raja Ampat MPA Network.

A total of nine patrols were conducted in October by the Jaga Laut in Area 1 – Asia and Ayau Islands MPA with no violations were found during this period. From those patrols conducted, the Jaga Laut from Area 1 encountered a total of 28 local fishermen. The rangers conducted interviews to all of them in order to collect Resources Use Monitoring (RUM) data.

All of the activities encountered by the Jaga Laut in October were local fishermen within the Sasi and Traditional Utilization Sub-zone or Shipping Line Sub-zone; which are the allowed zone for fishing for locals, and only with certain ecological friendly methods. 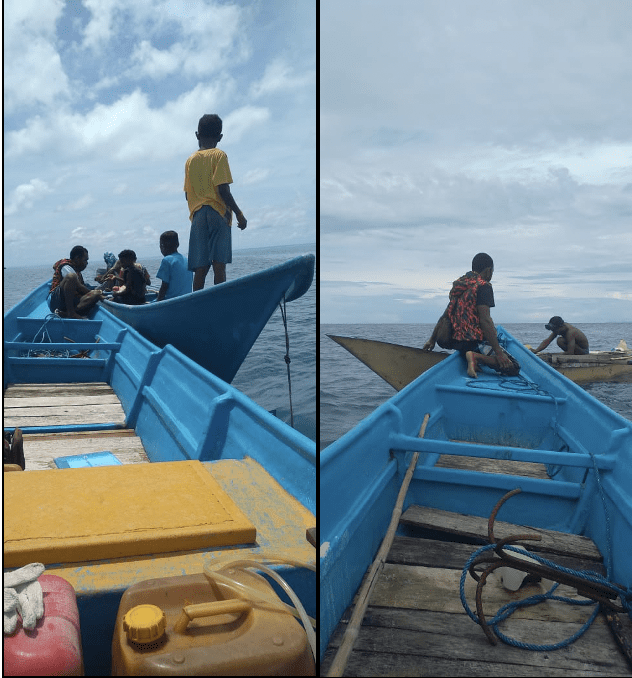 Two of the six local fishermen encountered by the rangers from Asia and Ayau Islands MPA during a patrol on the 09th of October, 2020. (Photo by: BLUD UPTD Pengelolaan KKP Kepulauan Raja Ampat/2020).

After quite a busy month in September for the rangers from Mayalibit MPA, no violations were encountered during the eight patrols conducted in October. RUM data were taken from a total of 20 local fishermen boats this month. Some of the fishermen were found in Aquaculture and Sustainable Fisheries Sub-zone, while the rest were found within the Sasi and Traditional Utilization Sub-zone; two sub-zones under the Sustainable Fisheries Zone. 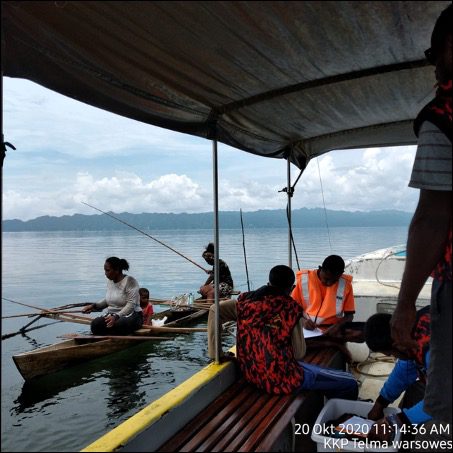 One of the fishing boats encountered by the Jaga Laut of Mayalibit Bay MPA on the 20th of October 2020. Interestingly, most of the fisher(wo)men found that day were female. (Photo by: BLUD UPTD Pengelolaan KKP Kepulauan Raja Ampat/2020).

Perhaps it is worth explaining here that, besides its relatively large area, due to its utilization’s intensity – especially from fishery activities and the significant increase in tourism for the past decade or so, two monitoring posts were established for Dampier Strait MPA: Yenadwak (or also known as Arefi) Monitoring Post, and; Gam Monitoring Post.

During the month of October, rangers from both Yenadwak and Gam conducted a total of 13 patrols and found 3 violations. All the violations found by the Jaga Laut were related to Bagan – a specific type of fishing boat that is not allowed to do any fishing-related activities within all the MPAs in Raja Ampat. The violations were encountered in three patrolling days, and all three were different boats.

One of the Bagans were encountered during a joint patrol with personnel from the Raja Ampat’s Air and Water Police Unit. Explanation related to MPAs do’s and don’ts was given to all three Bagans encountered in October, along with firm warning not to repeat their violations, before finally escorting them out of Dampier Strait MPA’s area. 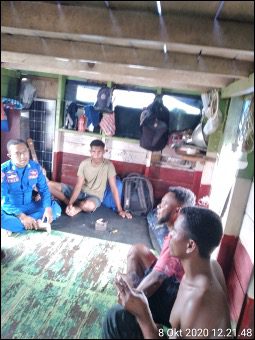 Personnel from Raja Ampat’s Air and Water Police Unit came onboard one of the Bagans encountered during a joint patrol with Dampier Strait MPA’s rangers. Strong reprimand were given to the Bagan’s crews, which is not allowed to operate within all the MPAs in Raja Ampat ever again. (Photo by: BLUD UPTD Pengelolaan KKP Kepulauan Raja Ampat/2020).

A total of four violations from six patrol days were encountered by the rangers from Misool Islands MPA in October 2020. All the violations were related to fishing activities in no take zone. Information regarding MPA’s zoning system and regulation were given to all violations, RUM data were taken, and all fishermen were directed to sail away from the mentioned zone.

One particular violation, encountered in 14th of October 2020, was found during a joint patrol with four personnel from Indonesian Army, representative from an NGO working within the MPA, and security personnel from the local pearl farming company. The joint patrol received reports from members of the community saying that four fishing boats from Sorong set up camps in Jaam Island.

The joint patrol then approached the fishermen in their camp and had discussion regarding their operation within the Food Security and Tourism Sub-zone – a no take zone. Misool’s Jaga Laut provided them with information related to the MPA, and firmly asked them to stop their operation and sail away from the mentioned Sub-zone.

Discussion held between the fishermen from Sorong and joint patrol from Misool Island MPA. The fishermen peacefully agreed to the suggestion of stopping their operation and sailing away from the no take zone. (Photo by: BLUD UPTD Pengelolaan KKP Kepulauan Raja Ampat/2020).

Rangers from Kofiau–Boo Islands MPA conducted a total of eight patrols in October, and didn’t find any violations. This month, the Jaga Laut encountered 20 local fishermen whom mostly fished within the Aquaculture and Sustainable Fisheries Sub-zone, while the rest were found within the Sasi and Traditional Utilization Sub-zone: both Sub-zones are allowed for fishing with certain methods. Rangers took all the RUM data from all the fishermen encountered. 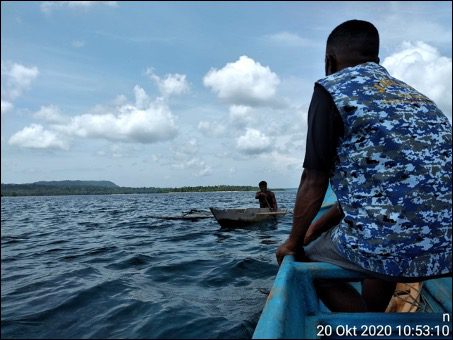 One of the findings in Kofiau-Boo Islands MPA during a patrol on the 20th of October 2020. No violations were found by the Jaga Laut this month. (Photo by: BLUD UPTD Pengelolaan KKP Kepulauan Raja Ampat/2020).

Three violations from eight days of patrol were encountered by rangers from Fam Islands MPA in October, 2020. All violations were found during a single patrol on the 15th of October 2020, where one fishermen from the nearby village and two other fishing boats from Sorong were caught fishing within the Food Security and Tourism Sub-zone; a no take zone.

One of the personnel of Jaga Laut provided information regarding MPA’s zoning system and regulation, while another personnel took RUM data, before all of the fishermen were finally directed to sail away from the mentioned Sub-zone. 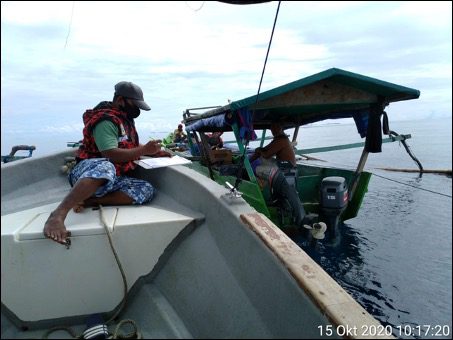 Jaga Laut’s personnel took RUM data from one of the fishermen from Sorong caught fishing within one of the no take zones in Fam Islands MPA. (Photo by: BLUD UPTD Pengelolaan KKP Kepulauan Raja Ampat/2020).

Out of nine patrol days conducted by rangers from West Waigeo Islands Marine Reserve, two violations were found. All violations were encountered during a joint patrol with representatives from the Ministry of Marine and Fisheries when two local fishermen were caught fishing within the Core Zone. The joint patrol then escorted them to the monitoring post, provided information about zoning system, before directing them to fish within the allowed zone or outside the MPA. 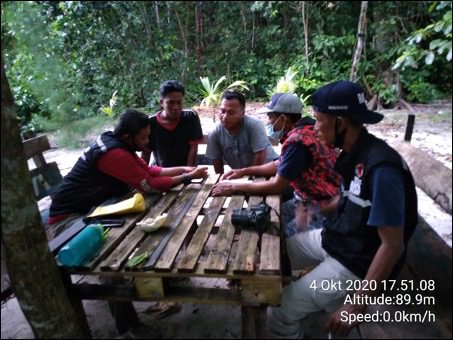 One representative from Ministry of Marine and Fisheries’ Raja Ampat Work Unit was providing information related to MPA’s zoning system and regulation to one of the fishermen caught fishing within the Core Zone that day. (Photo by: BLUD UPTD Pengelolaan KKP Kepulauan Raja Ampat/2020).

Table of Patrol Count from Seven MPAs in Raja Ampat from May to October, 2020.

Those are the updates from Raja Ampat’s Marine Park Authority regarding their regular enforcement effort from the month of October. We will update you again in December for patrolling activities conducted in November.

We sincerely hope this update would be useful for you, dear Readers. Thank you very much for your time, attention, and kind support. As always: stay healthy and stay happy everyone! 🙂