In the Shallows: Diving Highlight by Linda Pitkin

In the Shallows: Diving Highlight 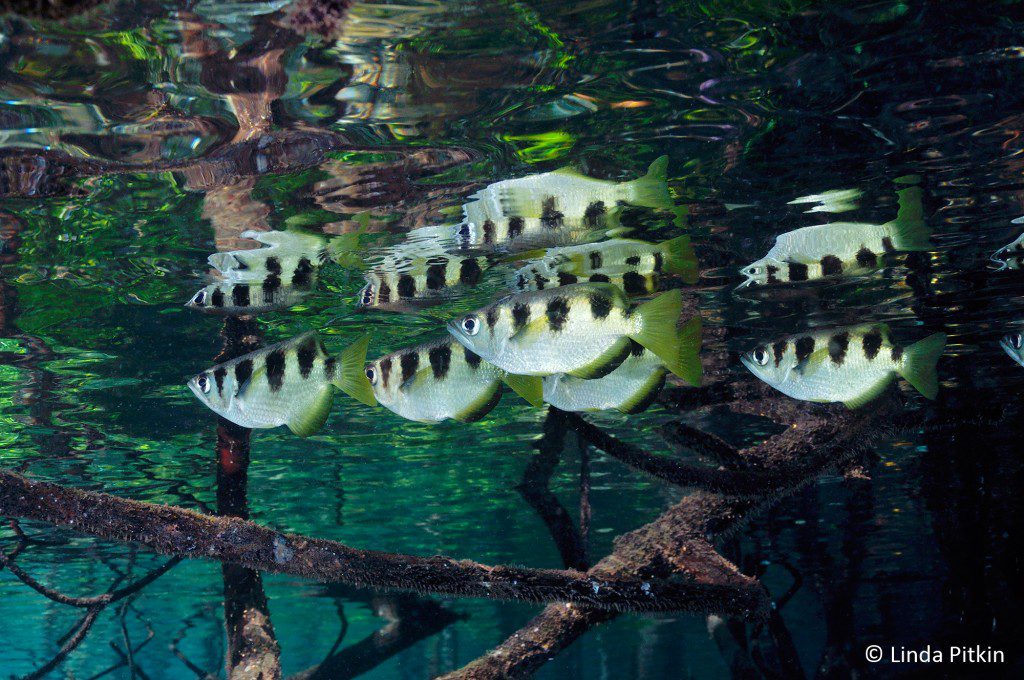 My diving highlight of a recent trip to Raja Ampat was a day and a bit spent in such shallow water that it was more like snorkelling with a tank on your back. I love being near the surface because the light can be amazing for photography, and the surface itself produces wonderful effects such as reflections and Snell’s Window, the circle or semicircle revealing surprizing glimpses of what is above the water.

A coral reef extended close to the surface, where trees lined the water’s edge densely, drawing me in to peer into shady grottoes of heavy roots dangling, bizarrely colourful with purple and red encrustations of tunicates and soft coral. Small cardinalfishes hovered in schools, sheltering from predators, together with the occasional batfish (spadefish). I looked out for Archer fish (a first for me), and was rewarded with the sight of groups of them streaming past, almost skimming the surface, their broken reflections making strange patterns. 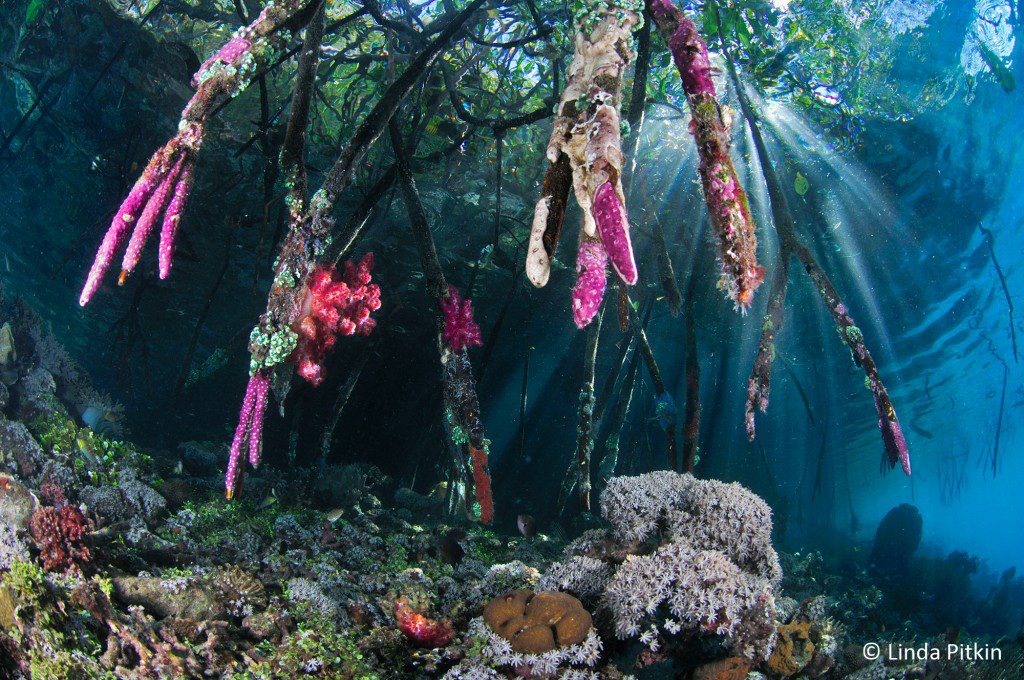 Shafts of bright sunlight streamed through the leafy trees, making a challenge for me to photograph the extremes of light and shade, but adding a magical quality to the scene. I lost track of time, bobbing about, suspended in the calm warm water, and spent the best part of two hours, while my computer, seemingly unsure if I was diving or not, registered only minutes underwater. 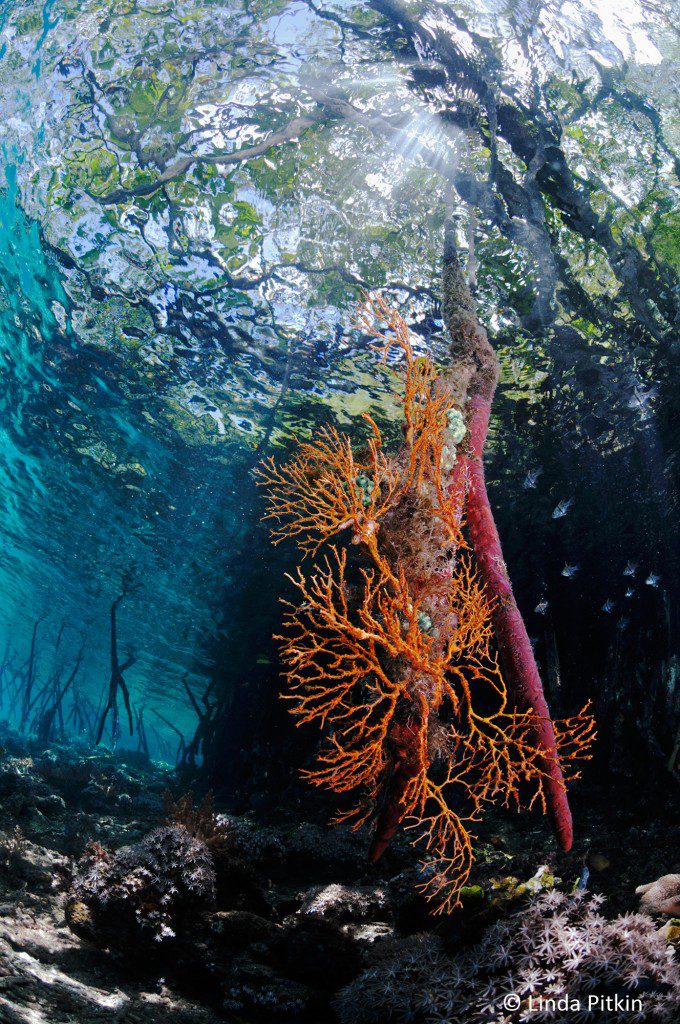 I’ve been fortunate enough to dive and photograph in many great spots around the world for decades, but this trip, organised by Graham Abbott of Diving 4 Images, totally reignited my enthusiasm. 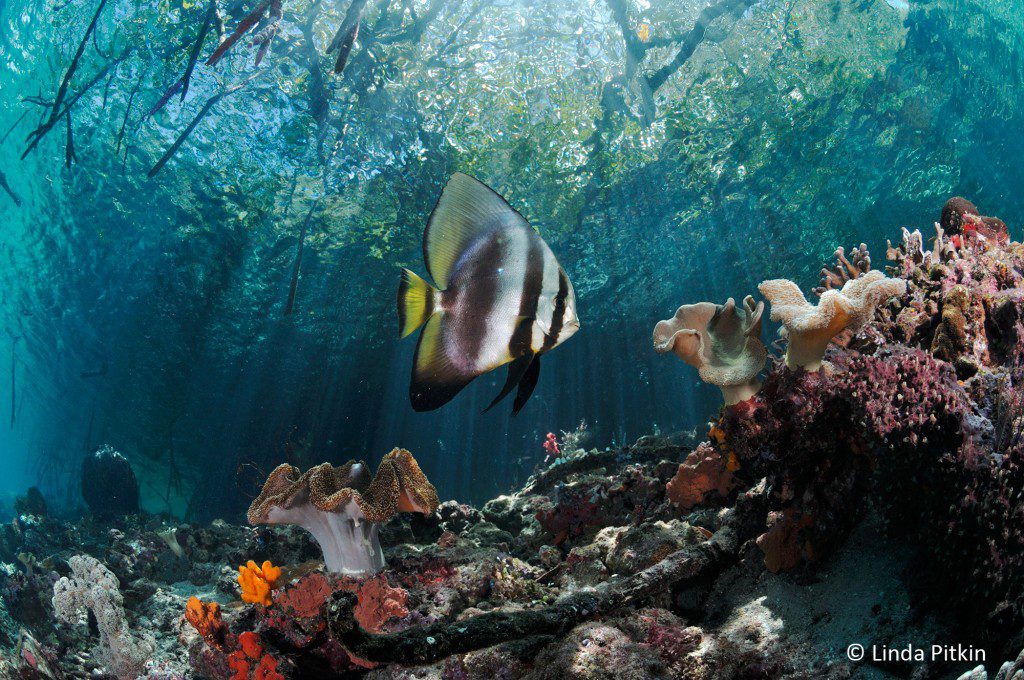 Linda Pitkin started diving in 1979, and took her first shots underwater when her husband Brian handed her a Nikonos camera a year later. She was instantly captivated! She says she loves underwater photography because of the beautiful quality of light filtering through the water, and because with patience and care you can get really close to wildlife, nose to nose with a fish, or feel as if you belong in a shoal of them. Her passion for underwater photography, especially of wildlife, developed alongside her long career as a biologist at The Natural History Museum in London, but she left there in 2006 to concentrate on photography and other projects. She is the author and photographer of four books and a number of articles, and her photography features widely in other books, newspapers, magazines, and exhibitions. She has had several exhibitions, including one at the London Zoo (ZSL) for four years until 2010. She has won many awards in national and international competitions, and is in the Women Divers Hall of Fame. In 2008 she was commissioned to take part in the project ‘Wild Wonders of Europe’ www.wild-wonders.com, and since was honored to be one of 20 top wildlife photographers working on ‘2020VISION’ www.2020v.org, the most ambitious nature most ambitious nature photography project ever staged in the UK, showing the link between healthy nature and healthy people. To view more of Linda’s images visit her website, www.lindapitkin.net.