Damselfishes are a ubiquitous, but often overlooked, member of the Indo-Pacific reef fish community. Around two hundred and fifty species, three quarters of the world’s damsels, are known to live in the Indo-West Pacific. With the world’s highest marine biodiversity, where better to enjoy these fishes first hand than Raja Ampat? 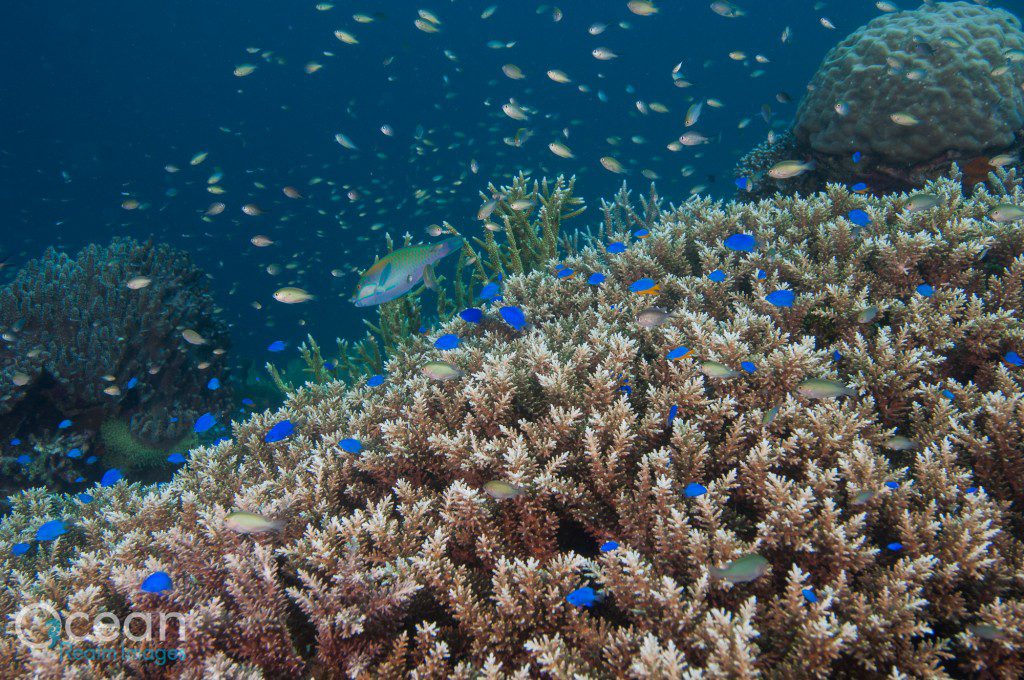 The coral reefs of Raja Ampat have a huge diversity of damselfish species.

Damselfishes are egg layers, most often laying their clutch on a pre-prepared nest site somewhere on the reef. When their eggs hatch, the majority of species’ fry will immediately be swept off in the currents to disperse around the ocean. Whilst the parents of these young fishes will never see the fruits of their reproductive endeavours, others raise young that never seem to leave home: the ‘Gen Y’ of the fish world. Over the past eleven days, I have been exploring the northern islands of Raja Ampat aboard Dewi Nusantara observing this unassuming group of fishes and their array of reproductive strategies. 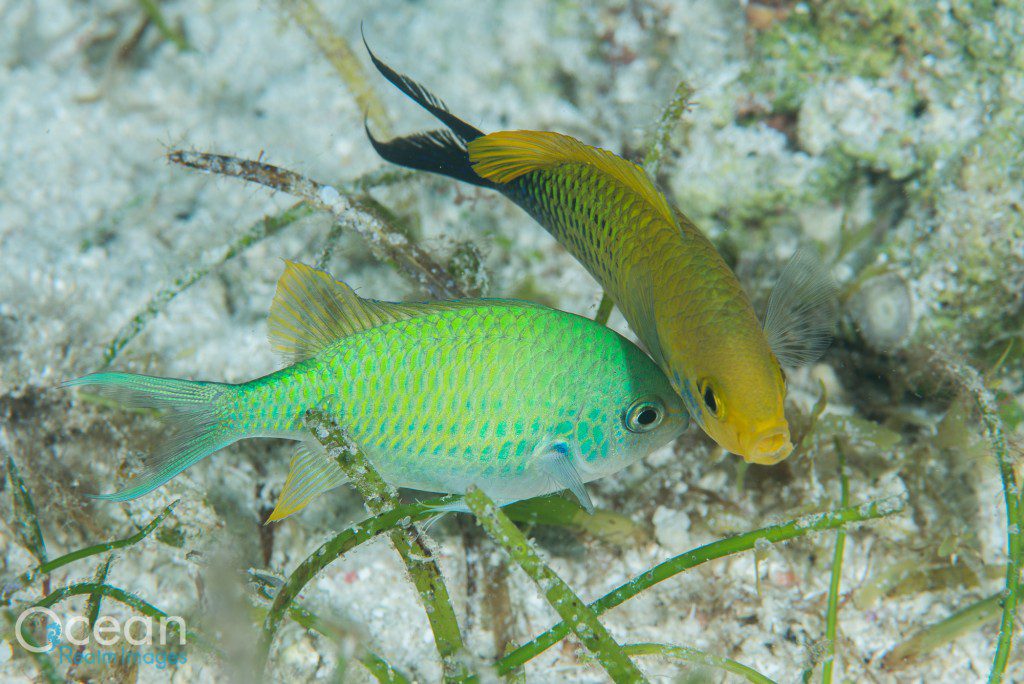 A courting pair of blue-green chromis. When attracting females, the male turns bright yellow to attract females to lay their eggs on his patch. The male fertilises them as the female lays them.

Many of us have had personal experience of a damselfish protecting its eggs. Sergeant Majors, anemonefishes and golden damsels are amongst a few of the common damsels that will not hesitate to take on us bubble blowers, seemingly unperturbed by our comparatively massive size. These demersal spawners, lay their eggs directly onto the substrate. Sergeant Majors nest en masse, with dozens of individuals making a wasteland of a few square metres of the reef, laying their purplish spawn that they enthusiastically protect from marauders. As such they are a kind of ecosystem engineer, altering the habitat for their own benefit but changing it for others too.

Swimming along a reef in northern Batanta Island, I came across a honeyhead damsel that had also strikingly altered its local environment. Rather than denuding it to lay its eggs, it had encouraged verdant algal growth within the square metre or so of its territory that it enthusiastically warded me away from. Like a disgruntled farmer it chased off any other creatures that tried to enter the confines of its little farmyard. Within the allotment honeyheads farm filamentous algae, which act as their primary food source. Their agricultural proclivities, and the exclusion of other herbivores and corallivores, alter the composition of species within these plots. By changing patches of the reef, these damsels are altering it for other species too. Their influences having a disproportionately large reach given their size. 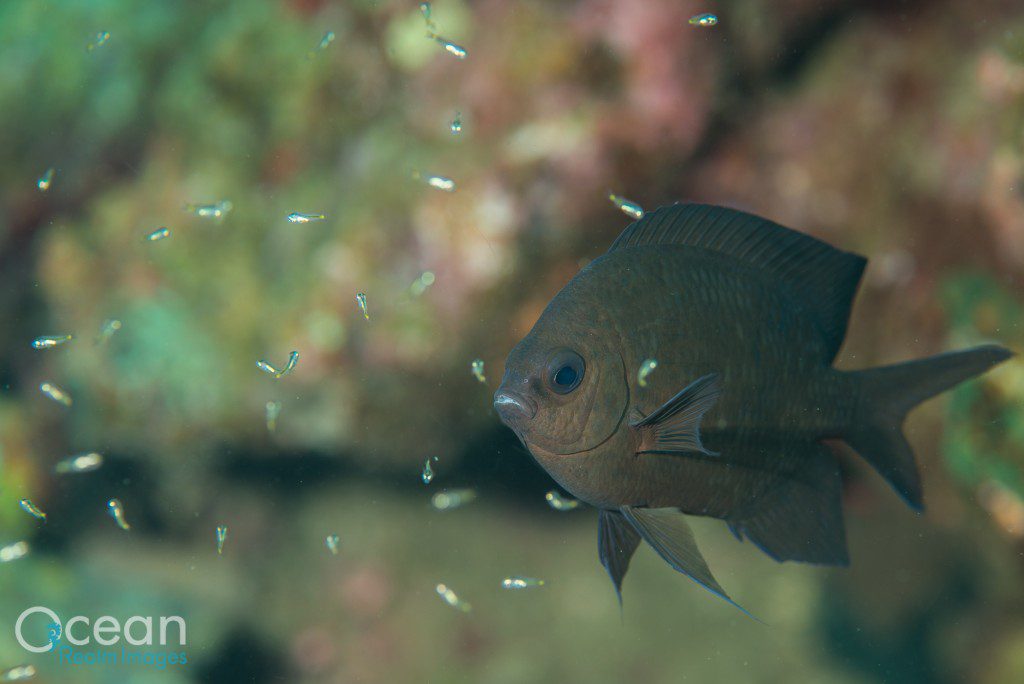 A spiny chromis with a clutch of newly hatched young.

Golden damsels on the other hand, usually lay their clutch of bright pink eggs on a whip coral or some other such protuberance coming off the reef. You’ll often see the diligent parent tending to their clutch. By aerating and removing infertile or spoiled eggs, they remove a reservoir of infection for others in the clutch. Like the eggs of many fishes, the initially vivid fresh eggs soon become grey in colour as they mature and the fry develop within. Just prior to hatching you can even see the reflective eyes of the tiny fish within. 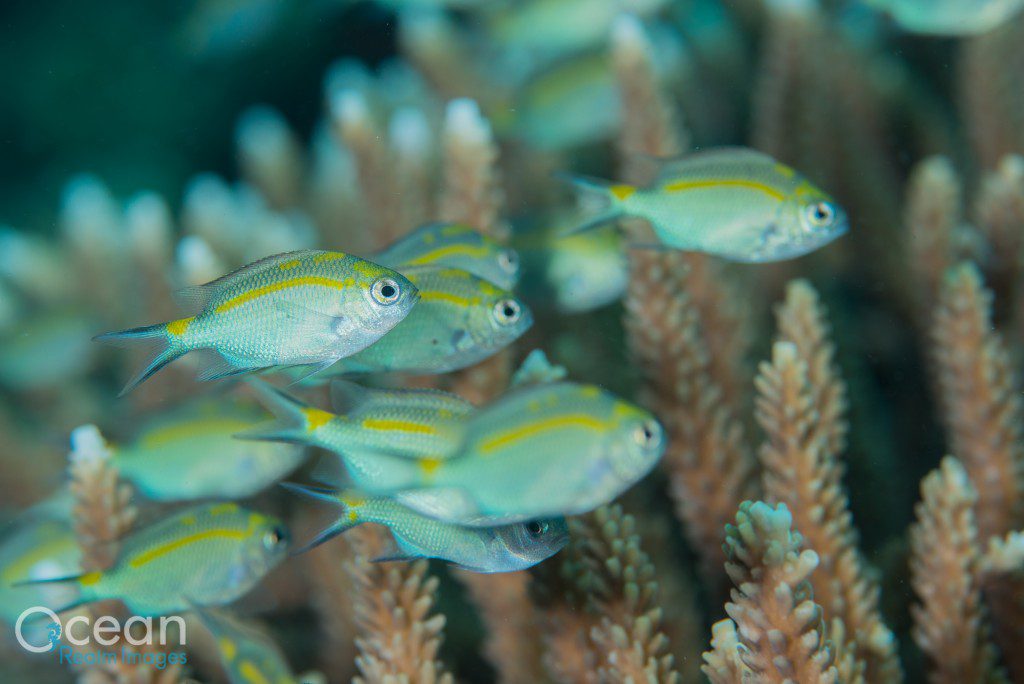 A young group of spiny chromis, still under the watchful eye of their parents.

One of the more extreme parental investments of a damselfish is found in spiny chromis. These inconspicuous damsels lay few large eggs, which both parents tend for an extended period until the relatively large fry hatch. They are rare amongst reef fishes, in that the fry lack a pelagic larval stage and remain close to where they were born their entire life. Although adults aren’t as protective of their fry as some other damsels, they keep an ever-watchful eye over the brood from hatching until they are quite large in size. When small the fry are almost transparent, but take on a faint yellow stripe as they grow. Adult spiny chromis have quite pointed fins and although variable in colour geographically, they are more often than not dark in colour, especially in the West Papua region. Finally the youngsters darken to become miniature versions of their parents, and even at this late stage remain in a loose school casually overseen by their parents. 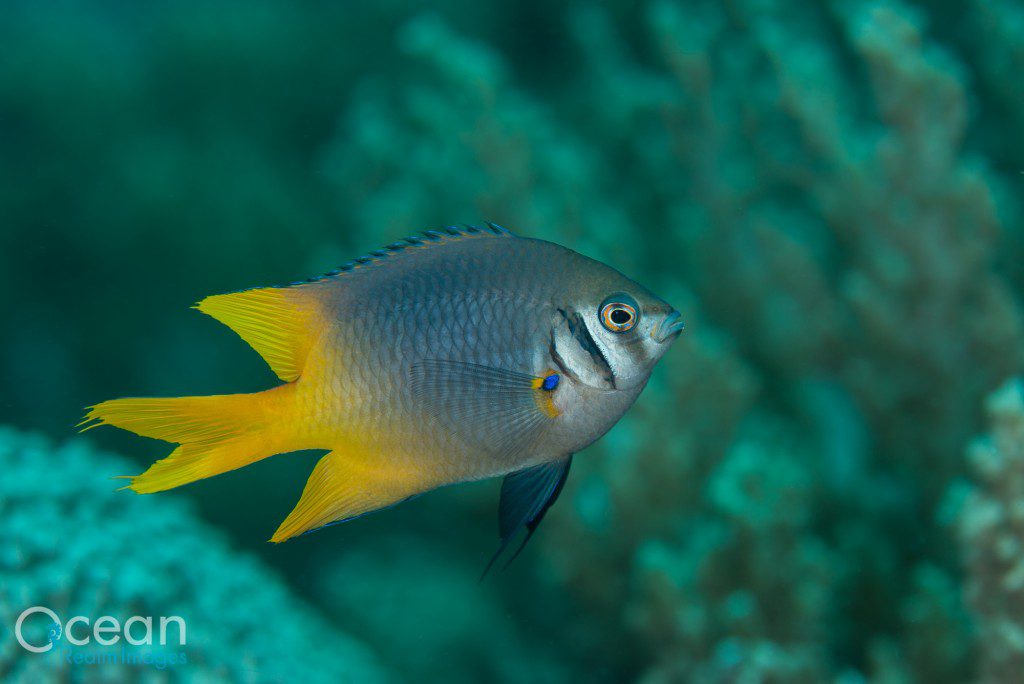 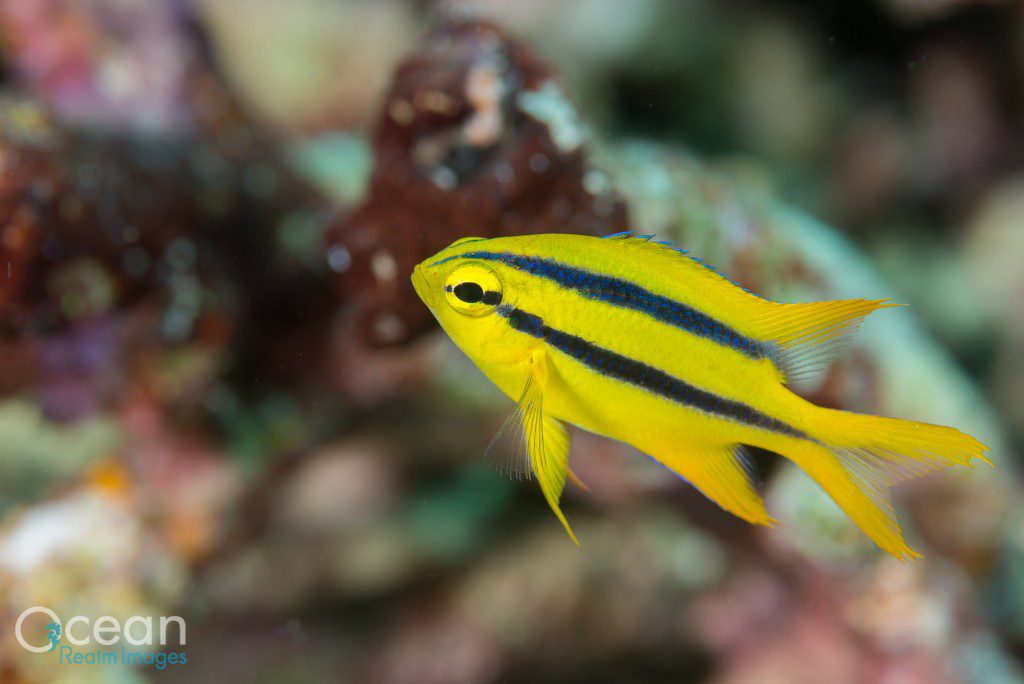 A final quirk of damselfish reproduction, which for me makes them one of the most beautiful reef fish groups, is the diversity of their juvenile forms. Adult black damsels, for instance, are midnight black in colour whereas their juveniles are almost indistinguishable as the same species. They are unexpectedly white and bright yellow, with bluey black ventral and anal fins. The leading theory for the dramatic change in colour or pattern from juvenile to adult in reef fishes is to reduce territorial aggression from adults. If juveniles appear completely different, the adults are less likely to hound them out of their territory and the two can coexist amicably.

Damselfishes are a group that many divers seem to overlook. I hope that I’ve convinced you to spare these unassuming fishes a thought on your next visit to the Bird’s Head. The more you learn about these abundant fishes the more fascinating they become, adding both to the diversity of the region and your diving experience. 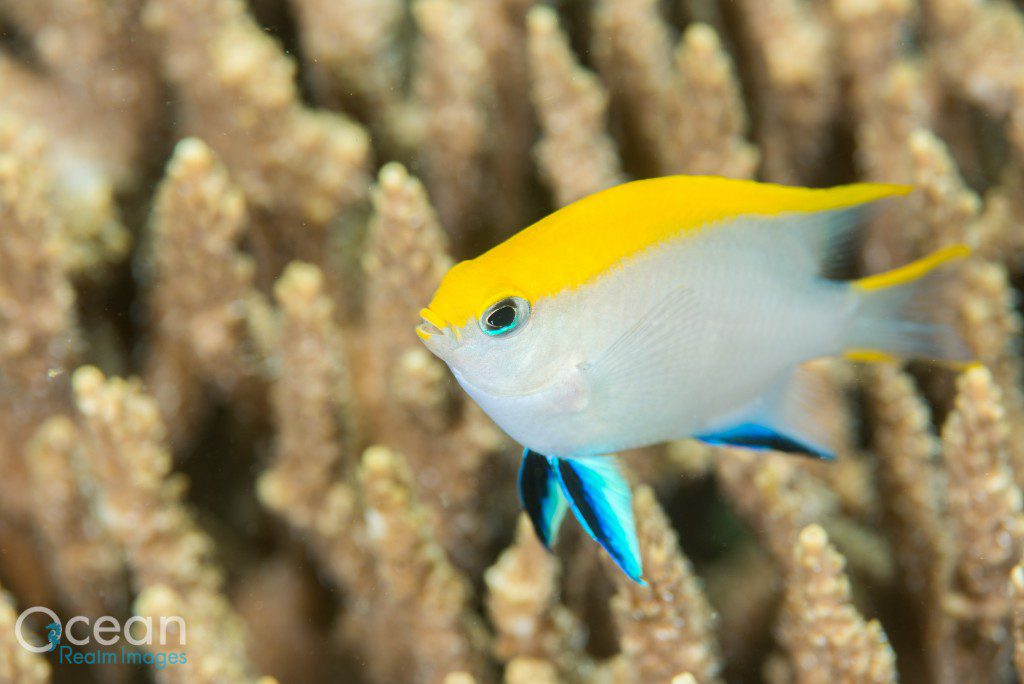 A juvenile black damsel is strikingly different to the adult form.

Richard Smith, a British underwater photographer and writer, aspires to promote an appreciation for the ocean’s inhabitants and raise awareness of marine conservation issues through his images. A marine biologist by training, Richard’s pioneering research on the biology and conservation of pygmy seahorses, led to the first PhD on these enigmatic fishes. Over the past decade, Richard’s photographs and marine life focused features have appeared in a wide variety of publications around the world. Richard leads expeditions where the aim is for participants to get more from their diving and photography by learning about the marine environment through marine biology lectures: www.OceanRealmImages.com