The Art of Describing a New Species of Fish by Dr. Gerald R. Allen

The Art of Describing a New Species of Fish

Administrator’s note: Dr. Allen began working on BHS coral reef fish species in 2001. To date he has described 51 new marine fish species from the Bird’s Head. He also works in lakes, rivers, and streams and has described another 49 species of BHS freshwater fish.  A 100 fish!  That is freaking awesome. 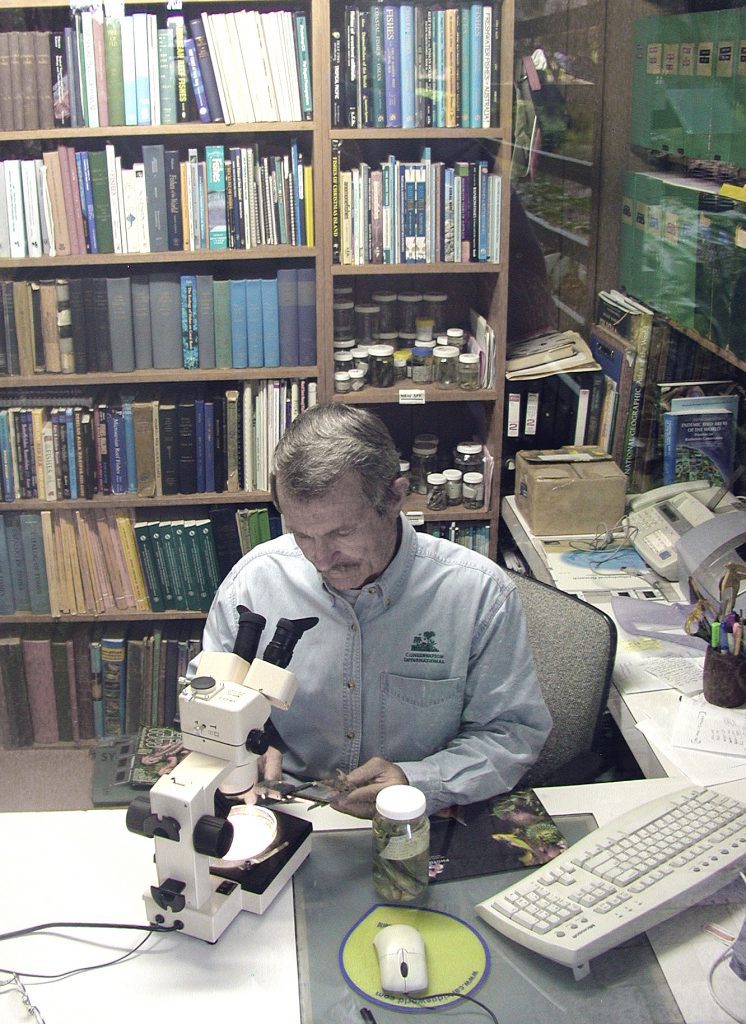 Working in his lab at the Museum of Western Australia, Perth (2005)

It just came to my attention that what I routinely do for a living – describing new fish species – is not that well understood by everyone. So I’ve written the following paragraphs to try and rectify this situation. The process follows a fairly rigid protocol, which is essentially focused on one or more preserved museum specimens, which are collectively termed type specimens. These serve as the “gold standard” for the new species that is being described. How do I know that a species is new in the first place? Past experience that compounds over the years is a huge factor. I’ve now been diving on Indo-Pacific coral reefs for more than 50 years with a special focus on certain groups such as damselfishes, flasher and fairy wrasses, snappers, dottybacks, and various goby genera. In most cases it’s a matter of instant recognition. After years of study and viewing the already described species while diving, I know these groups intimately and anything new or out the ordinary sticks out like a sore thumb. For fishes that belong to families or genera that I’m less familiar with it involves considerably more library research and comparative study of related fishes back in the lab in order to be sure the species in question is absolutely new. 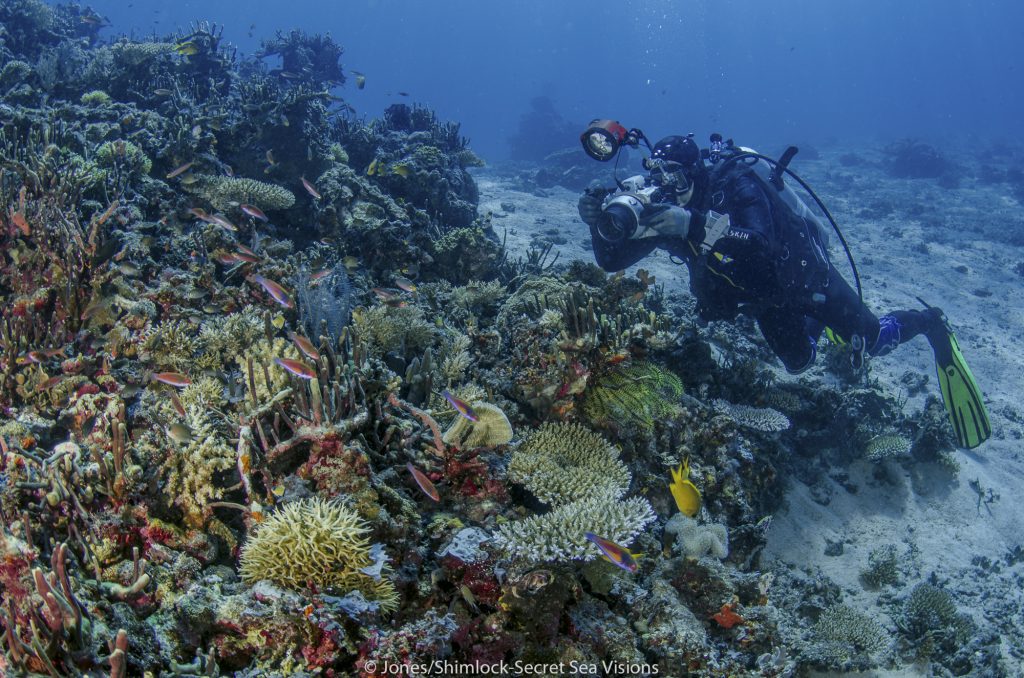 Photographing one of his favorite groups of fish, the Fairy Wrasse!

Just to summarize – the undescribed status of a potential new species is verified by preliminary research that involves searching out pertinent literature, the examination of closely related fishes in museum collections, and sometimes correspondence with other experienced researchers. The next stage is the tedious process of data collection – recording counts and measurements of a representative sample. In rare cases, this may be just a solitary specimen, but ideally a description is based on multiple examples. There is no hard and fast rule. I prefer to have at least 10 specimens, but the more the merrier. It’s always dangerous to describe a species based on only one fish as it might be aberrant with regards to important attributes such as fin ray and scale counts, thus creating a false “standard” for the species in question. 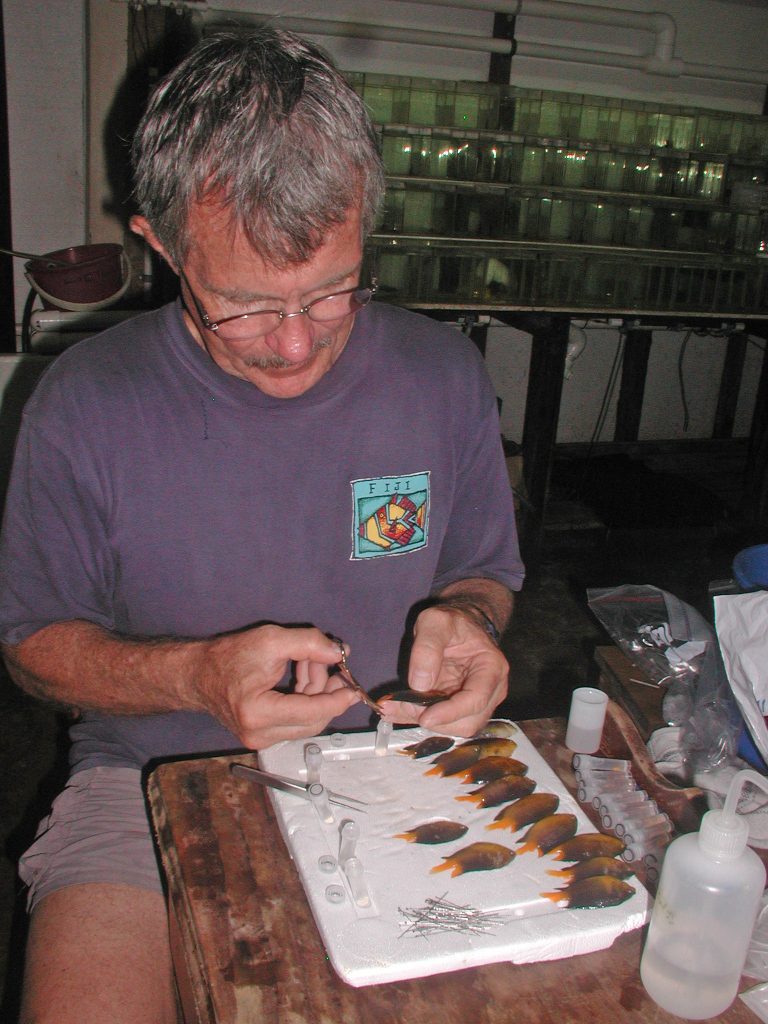 Pinning samples of a new species in Fiji, which will later be used in the description of the specimen (2005) 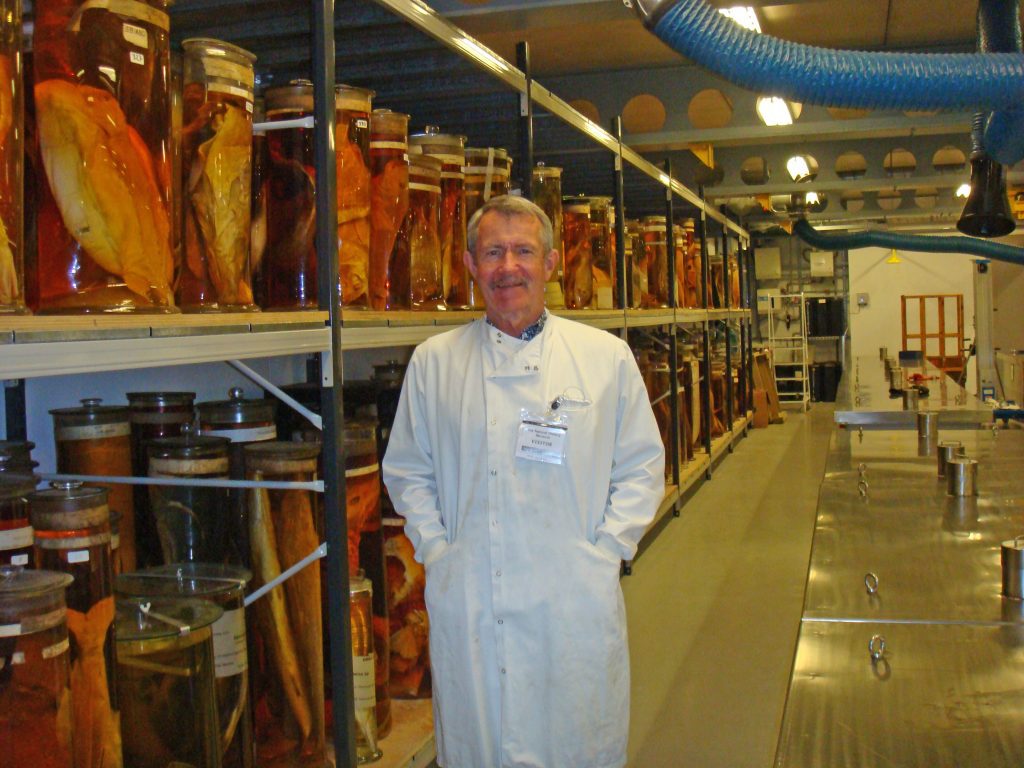 Working in the Fish Collection of the British Museum (2007)

There is no set format for a new species description; consequently there is tremendous variation in approaches, depending on the individual author and especially the particular fish that is being described. Basically, a set of characters that is important for one group (usually a family or genus) of fishes is not necessarily useful for another group. The main aim of the description is to include adequate descriptive text and illustrations that will enable the reader to distinguish the new species from all of its relatives. For some gobies, for example the genus Grallenia, the amount of the body that is covered by scales is all important for distinguishing one species from the next. However, there are many goby genera that have the body uniformly covered in scales or in a few groups the scales are missing entirely. It’s always important to try and conform whenever possible to previous published methodology that has proved useful for a particular group. 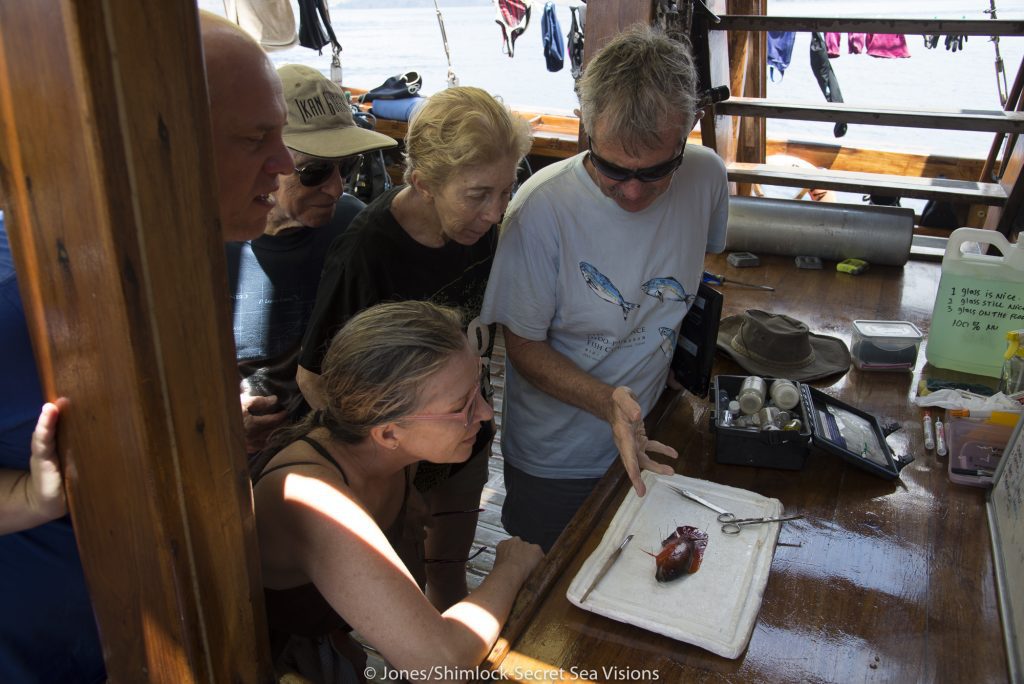 Gerry, with live aboard guests in the BHS, describing the features of a newly captured species.

One of my favourite groups is the family Pomacentridae, commonly known as damselfishes. I’ve been working on them since grad school days in the 1960’s and to date have described 117 species. So over the years I’ve been able to formulate and refine a rigid descriptive format that has now stood the test of time. Each new species description contains a brief diagnosis that gives the essential features of the new taxa that separate it from other damselfishes. This section is followed by a much more detailed descriptive section that includes dorsal, anal, pectoral, and caudal fin-ray counts, as well as counts of tubed lateral-line scales, gill rakers, and vertebrae (determined from digital x-rays). The basic count data is then followed by descriptive information related to types of scales, extent of scalation on the head and fin bases, shape and number of jaw teeth, and body proportions. The latter are usually conveyed as the percentage of the standard length or the number of times that the length of a particular body part fits into the standard length (SL) or the head length. For example the maximum body depth, which quickly conveys the general body shape (slender versus deep-bodied), might be given as 3.7 in SL (a very slender shape) or 1.5 in SL (relatively ovate or rounded). Standard length is the distance from the snout tip to the base of the tail and is generally used as a more dependable measurement rather than total length because the tail is frequently damaged in preserved specimens. For damselfishes I routinely take 27 different measurements for each specimen as well as 14 counts for various fin rays, gill rakers, teeth, and vertebrae. Most body measurements are taken with electronic dial callipers, which at the push of a button; record the information directly onto an Excel spreadsheet. It takes approximately 30 mins to process each specimen. 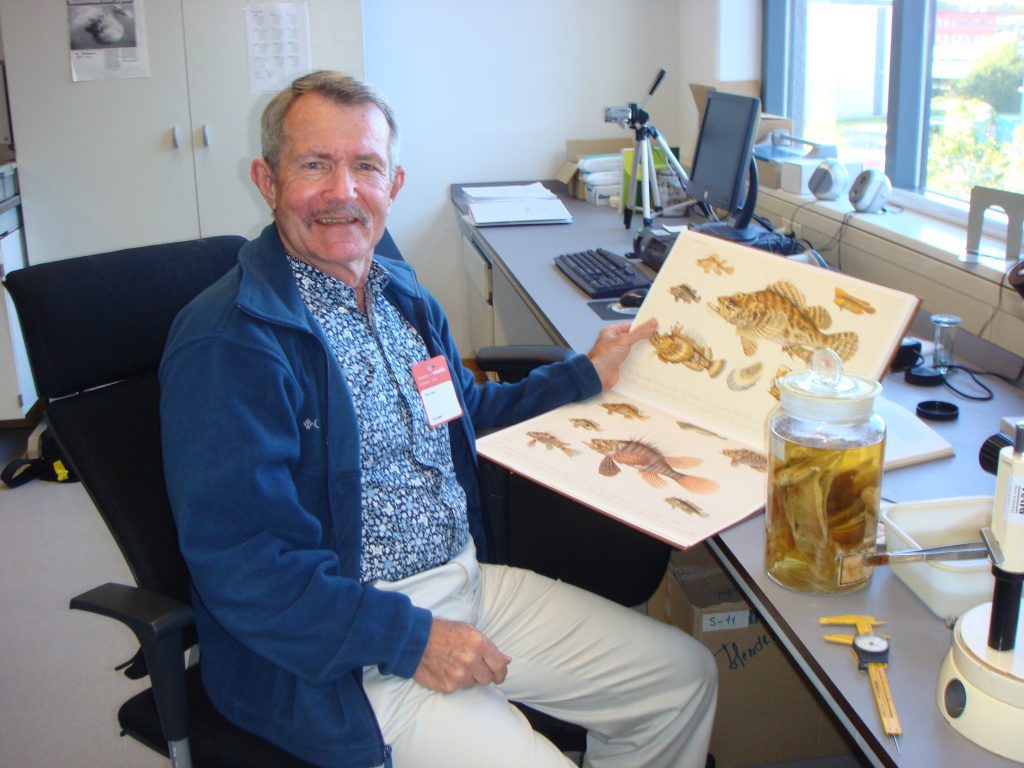 Working at the Leiden Museum in Holland (2007) 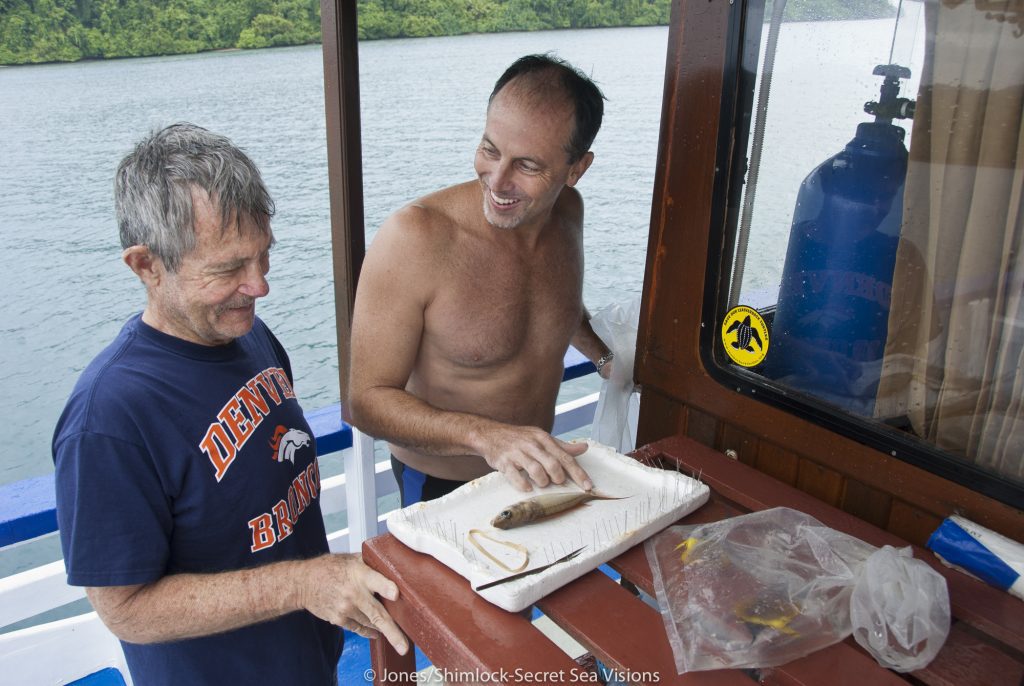 Pinning out a new BHS specimen with Dr. Mark Erdmann.

The description also should include an accurate account of both live and preserved colors, and information pertaining to general habitat, behaviour, and known geographic range. There is also a brief section (Etymology) dealing with the origin of the scientific name. The describer of a new species is at liberty to select an appropriate name according to the International Rules of Zoological Nomenclature (available online). Most names are from Latin or Greek and are frequently based on either morphological features (eg. rubripinnis: red-finned; exilis: slender, etc.), geographic places (eg. philippinus, japanensis, etc), habitat (lacustis: lake dweller; paludicola: swamp dweller; abyssicola: deep dwelling, etc.), or a person’s name (collectors, friends, relatives, politicians, financial donors, etc.). 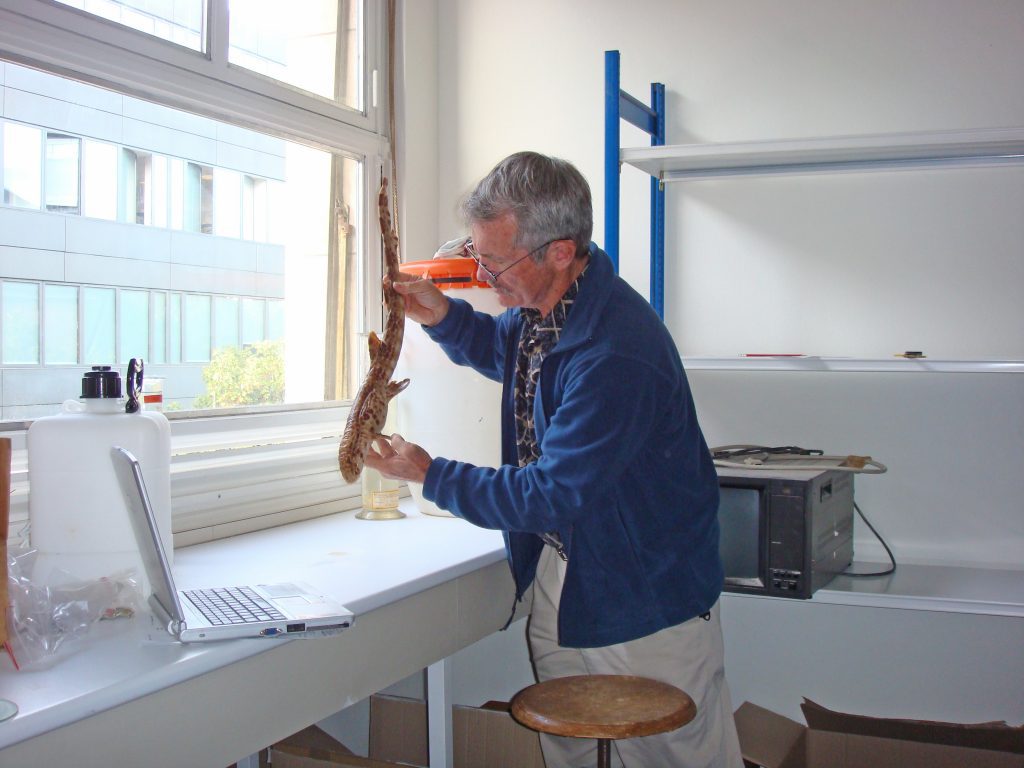 Examining a “walking shark” specimen at the Paris Museum (2007)

If there is more than one specimen, one of the examples, usually the one that is in the best condition and is truly representative as established by counts and measurements, is selected as the holotype. If there is only a single specimen it is automatically the holotype. The remaining specimens that form the basis of the description are called paratypes, unless they are specifically designated as non-types due to their damaged condition or if there is any doubt that they belong to the new species. All type specimens must be deposited in a recognized institutional museum collection and are given a registration number, which is included in the description. 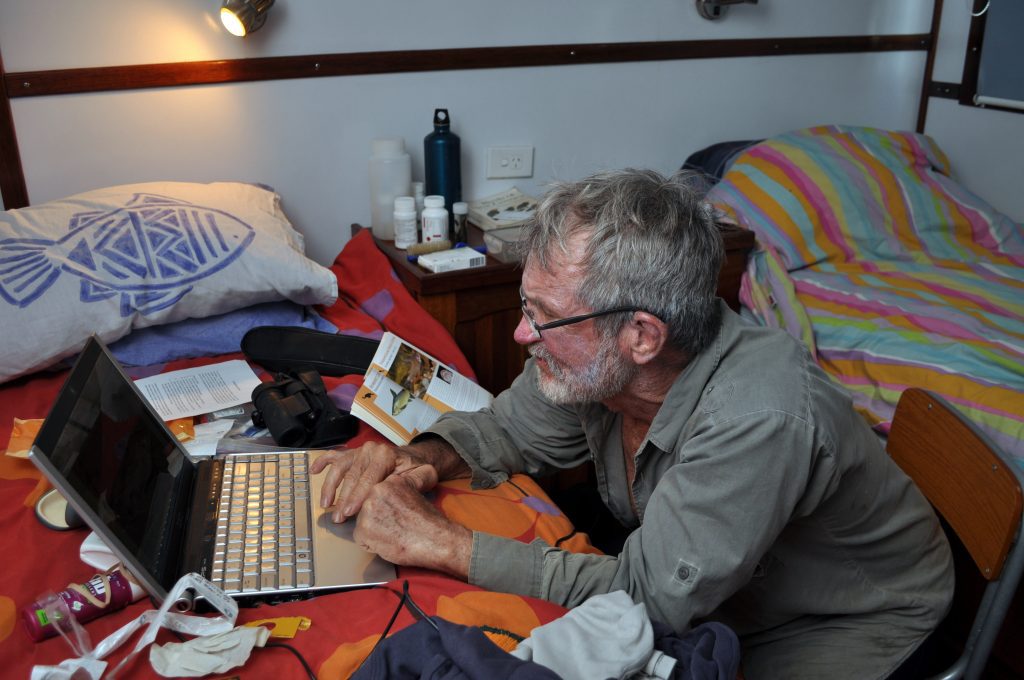 Working in the field in Papua New Guinea (2011)

There are a variety of journals that publish descriptions of new species. Some of these are traditional paper publications that are long established and highly reputable. There is also an increasing number of online journals that are rapidly gaining popularity due to the much-reduced waiting time between submission and actual publication, and the unlimited use of color illustrations, which may be severely restricted or discouraged in more traditional journals. Every journal has its own format, which the author must comply with. Once a manuscript is submitted there is generally a waiting period while it is sent to a panel of experts for review. After the review process the manuscript is returned to the author, who must then satisfy the journal editor that all of the reviewer’s comments and corrections have been incorporated or give reasons for not following their recommendations. The manuscript is then typeset and the proofs are sent to the author for final checking before publication. Although the entire process may seem a bit complicated it’s actually very straight forward – especially after a few hundred times. 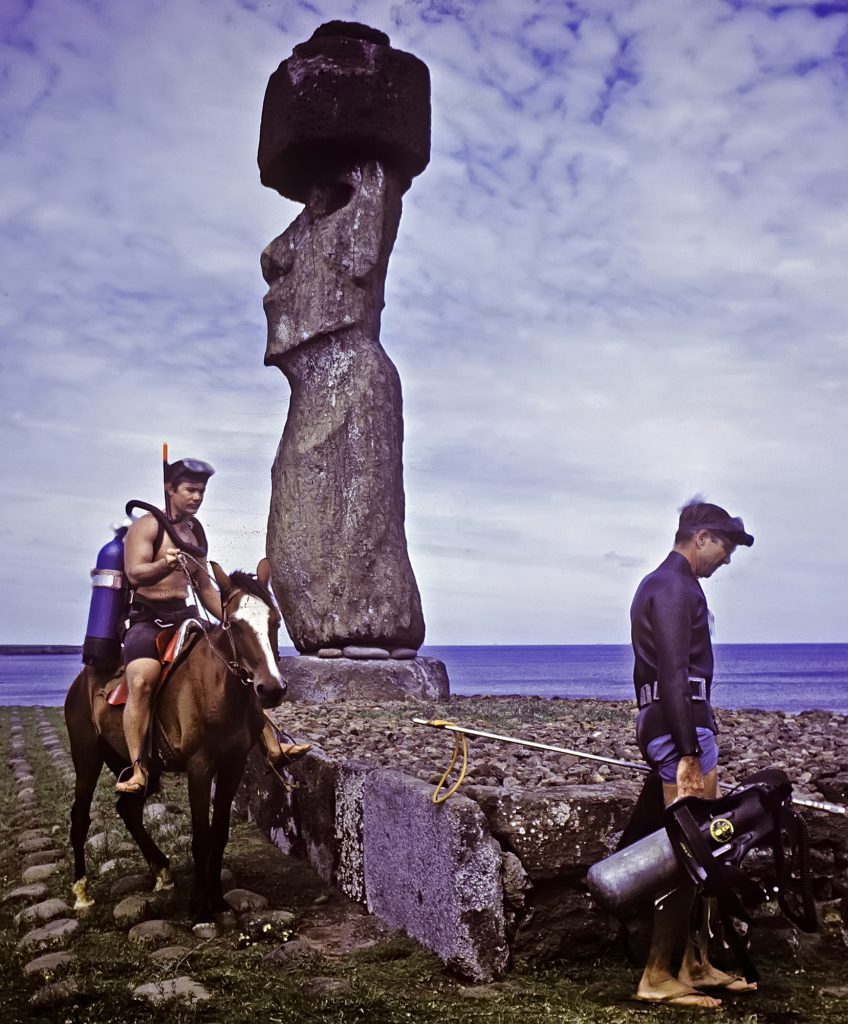 In 1969 Gerry made his first field trip to Easter Island with his professor Dr. John “Jack” Randall from the University of Hawaii’s Bishop Museum, the only person on the planet who has described more fish than Gerry! Gerry had won a bet the day before and therefore got to ride the research center’s lone horse for the day. Note: the double hose regulators.

Dr. Gerald Allen is the BHS’s ultimate “fish geek”!  He dives frequently in the BHS, mainly looking for new species. But he is also the person responsible for the seminal surveys that established the Bird’s Head as the planet’s most diverse tropical marine environment. For more than 24 years Gerry was the Curator of Fishes for the Western Australia Museum (Perth). During his tenure, Australia’s fish count increased from around 600 to over 2000 species. During the dozen years Gerry has dived around the Bird’s Head, the fish count has grown to over 1700. Author of more than 33 books and 400 scientific publications, Gerry’s work is known to the dive community through his books on anemone fish, butterflyfish, and the classic Reef Fish Identification: Tropical Pacific which he coauthored with Roger Steene, Paul Humann, and Ned DeLoach. Most recently Gerry co-authored the three-volume comprehensive set, Reef Fishes of the East Indies with Dr. Mark Erdmann, vice-president of Conservation International’s Asia-Pacific marine programs. During his 40-year-long career Gerry has logged more than 12,000 dives. We have had the pleasure of diving with him frequently. Besides counting fish and looking for new species, Gerry has an overflowing archive of some of the funniest dive stores we’ve ever heard.