Who would have thought that, back in 2001, a marine rapid assessment in one of the remotest parts of the planet would discover that Raja Ampat is the global epicenter of marine biodiversity and has now placed this eastern Indonesian archipelago as a top conservation priority?

Who would imagine that in the 1990s and early 2000s, blast fishing and shark hunting were commonly occurring in this region, but by 2012, the area would pioneer legislative protection of sharks and manta rays throughout Southeast Asia?

It has been over two decades since the underwater jewel of Raja Ampat was discovered. Since then, a series of conservation actions, initiated by the adat (native) people of Raja Ampat, has led to thriving populations of manta rays in the region. This is encouraging news, despite the recent findings of the precipitous decline in global populations of sharks and rays over the past fifty years due to overfishing.

In the Papuan Bird’s Head Seascape (BHS) of Indonesia, reef manta rays (Mobula alfredi) are abundant and have higher rates of pregnancy than have been recorded elsewhere in the Indo-Pacific. They have moreover demonstrated a significant population increase over the past decade of monitoring by our manta researchers, with huge contributions from tourism operators and citizen scientists. 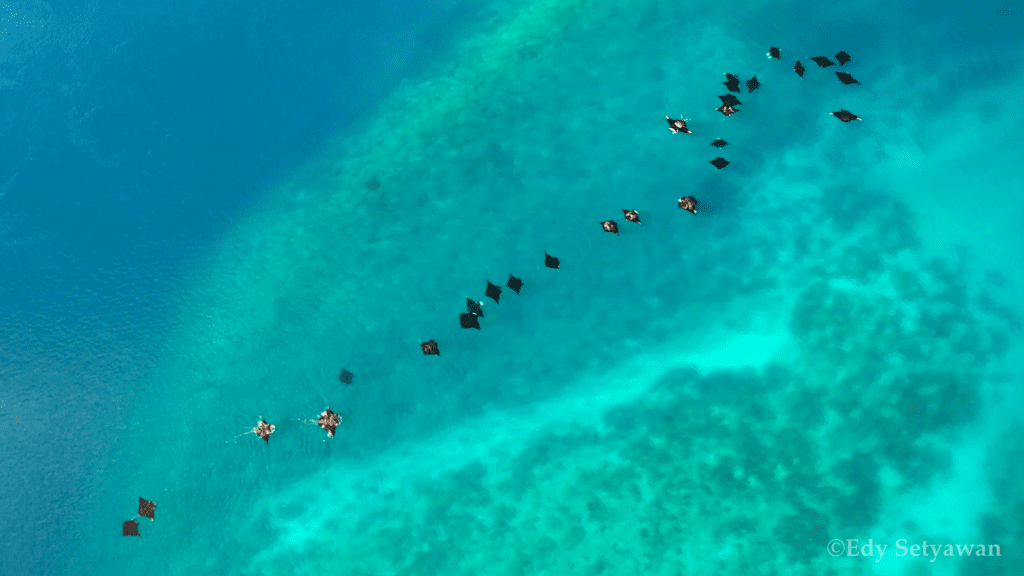 A “feeding chain” of reef mantas in Raja Ampat

In a paper recently published in the journal Marine Policy, we document two decades’ of conservation efforts in the BHS, which represent an organically-developed, holistic approach to manta ray conservation that has demonstrated compelling evidence of success despite ongoing challenges.

The paper entitled “A holistic approach to manta ray conservation in the Papuan Bird’s Head Seascape: Resounding success, ongoing challenges”, provides detailed insights on this adaptive, and continuously evolving conservation approach used for manta ray protection in the BHS.  The hope is that this approach might inform similar efforts towards elasmobranch conservation in other countries.

If you have manta ID photos taken in Raja Ampat, you can champion our manta conservation effort by contributing the images to our research team, and be part of our conservation success!  Contact us regarding your manta images at info@birdsheadseascape.com.

Edy and his coauthors on the paper would like to sincerely thank the following donors who have generously helped support BHS manta conservation over the past decade: the David and Lucile Packard Foundation, the MacArthur Foundation, the Sunbridge Foundation, MAC3 Impact Philanthropies, the Wolcott Henry Foundation, Save Our Seas Foundation, Sea Sanctuaries Trust, Save the Blue Foundation, the Walton Family Foundation, Dawn Arnall, Seth Neimann, Marie-Elizabeth Mali, the Charles Engelhard Foundation, and the Stellar Blue Fund. Finally, this research was made possible thanks to funding to Edy Setyawan from the New Zealand ASEAN Scholarship (NZAS) and WWF’s Russell E. Train Education for Nature.